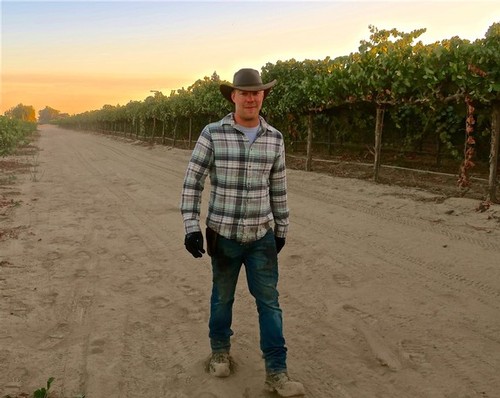 Soil series taxonomy in the United States was originally developed by the USDA for the purposes of agricultural advisory. Over 14,000 different soil types have been identified. According to the information on the Tokay series fine sandy loam soil found in usda.gov: 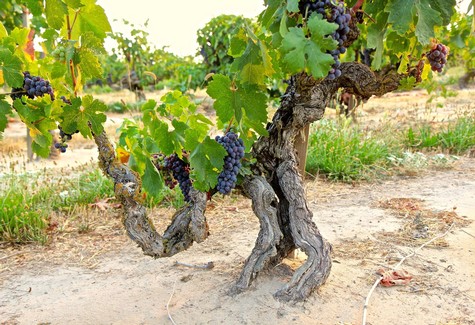 Ancient vine Zinfandel, originally planted in 1901, has thrived in the Fry family's Marian's Vineyard located south of the City of Lodi, where the Tokay fine sandy loam is layered with a calcareous substratum.

• Tokay soils are on low fan terraces at elevations 10 to 150 feet (the higher elevation incidents are found along the Mokelumne River east of Lockeford in the Clements Hills AVA, whereas most of the Mokelumne River AVA is below 100 feet)
• Slopes are 0 to 2 percent (although most of the Mokelumne River AVA has been leveled for farming, there are still some older vineyard blocks containing subtle slopes or dips).
• The climate associated with Tokay fine sandy loam is considered a subhumid mesothermal with hot dry summers and cool moist foggy winters (i.e., Mediterranean climate). Mean annual precipitation is 13 to 17 inches, and mean annual temperature is 60 to 61 degrees F. 45 degrees in January and 77 degrees in July. 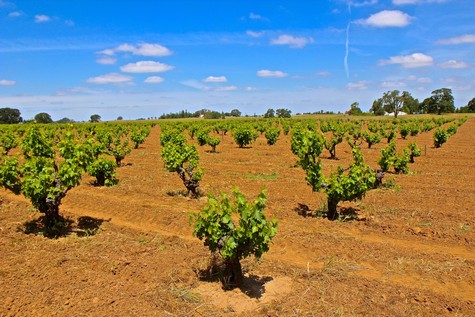 Own-rooted Zinfandel in a Clements Hills AVA vineyard planted in 1944 known as Dogtown (producing a vineyard-designate wine for Turley Wine Cellars), known for its Montpellier series fine sandy loam found in slightly higher elevations (above 100 feet) near the banks of the Mokelumne River.

The fine sandy loam soils found throughout Lodi's Mokelumne River AVA are not cut from exactly the same cloth. Within the AVA are pockets of similar fine sandy loams, also derived from granitic rock sources, that are classified as Acampo or Kingdon. Much of the fine sandy loam found on slightly elevated, hillier areas, particularly in the Clements Hills AVA, fall primarily in the Montpellier series, although Tokay series soils also occur in swaths along the Mokelumne River's south banks between Clements and Lockeford. These competing soil series are significant because grape varieties such as Zinfandel and (historically) Flame Tokay and Carignan have proven to be equally adaptable to these slight variations of fine sandy loam. 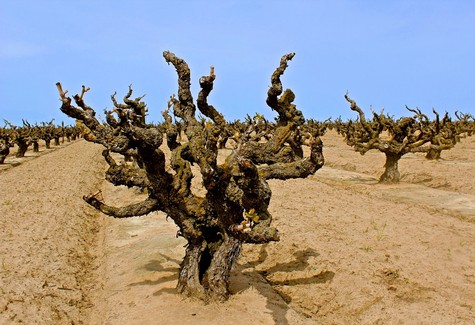 On the far west side of the Mokelumne River-Lodi AVA, these 105-year-old own-rooted Zinfandels in Soucie Vineyard are grown in an ultra-fine, almost talcum powder-like sandy loam classified in the Acampo series.

When you read about sandy loam soils in books or online articles, you generally learn that the advantage and disadvantages of these soils are their well-drained or low water-holding capacities, which can be problematic during droughts, making them disposed towards vine dehydration and often necessitating aggressive irrigation. Sandy loam soils can also be deficient in nitrogen, potassium, phosphorus, and other nutrients necessary for grapevine health and grape quality. 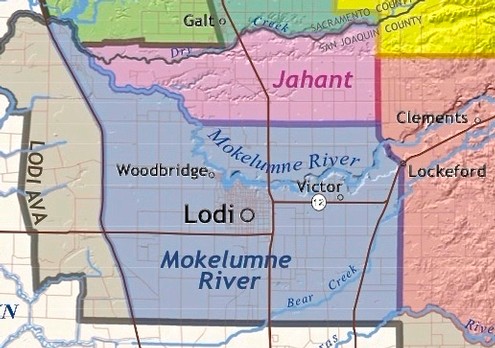 1. Access to water due to the region's location between the Sierra Nevada and Sacramento-San Joaquin River Delta. Historically, or prior to the construction of the Pardee Dam (1929) and Camanche Dam (1963), the high water table beneath the Mokelumne River AVA allowed for dry farming or minimal irrigation of grapevines, and today the Lodi winegrowing industry continues to enjoy the advantage of water access.

2. The exceptional soil vigor of these deep, sandy loam or loamy sand soils. 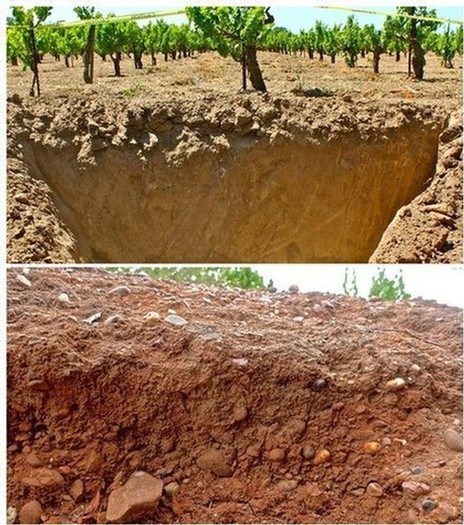 A comparison of the deep Tokay fine sandy loam (top) found in the Mokelumne River AVA's Bechthold Vineyard (Cinsaut planted in 1886) with the Redding series gravelly clay loam (bottom) typifying the Sloughhouse AVA located in the northeast corner of the Lodi appellation. Despite the well-drained properties of the Tokay series, this pedon is rated much higher than Redding series in terms of soil vigor.

In fact, when the proposal for seven Lodi sub-AVAs was submitted to the TTB in 2005, the distinctions of each appellation primarily having to do with differing soils and topographies were couched in terms of their Storie index. Storie index is the method of rating soil vigor based on soil characteristics first devised by R. Earl Storie at the University of California, Berkeley in the 1930s as a way of measuring land valuation, particularly for agricultural industries.

The Storie index ratings submitted in the proposal for the seven Lodi AVAs, which were approved in 2006: 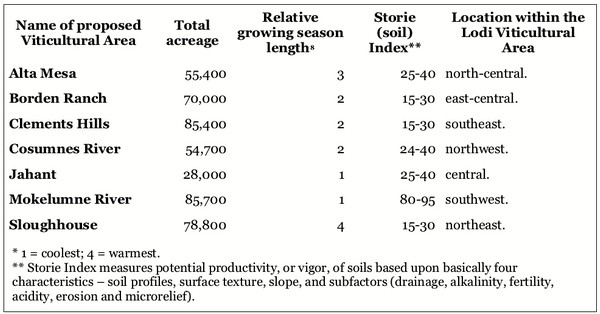 In this comparison of the seven Lodi AVAs, the Mokelumne River area, defined by its Tokay fine sandy loam, was rated nearly off-the-charts in terms of soil vigor and quality. Especially in comparison to the much lower vigor, volcanic, gravelly clay soils defining the Clements Hills, Borden Ranch, and Sloughhouse AVAs (falling predominantly in Redding series soil types), or the shallower, sandy/gravelly clay soils of the Jahant, Cosumnes River and Alta Mesa AVAs (the latter areas, predominantly in the San Joaquin series, the official state soil of California).

In short, although the Tokay series may be regarded as a classic, well-drained pedon of sandy loam, it has also always been recognized for its exceptionally high potential for agricultural productivity. 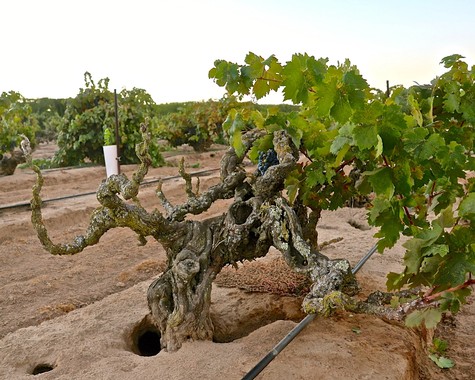 The extremely porous soil of Rous Vineyard (Zinfandel planted in 1909), located on Mokelumne River-Lodi's east side, is more accurately described as a Tokay loamy sand rather than Tokay sandy loam.

In their 1937 USDA study of the Lodi area farmlands, Soil Survey of The Lodi Area, California, Stanley W. Cosby and E.J. Carpenter also found that wherever they found the soil types which they classified as Hanford fine sandy loam, they also found sporadic pockets of what they called "Hanford fine loamy sand" (redefined as Tokay fine sandy loam later, in 1990), particularly on the east side of the city, and in some sections just south of the city. They wrote:

Hanford loamy sand occurs in a number of small bodies in the central part of the valley plain and is more or less closely associated with the two large areas of Hanford sandy loam. The loamy sand occupies very slightly elevated ridges and low mounds, which apparently represent remnants of a deposit of coarse alluvium which has been modified to some degree by wind action... Although this soil has a low water-holding capacity, it is extremely permeable and particularly well suited to the production of certain fruit crops — especially Flame Tokay grapes. With an adequate supply of water for irrigation of the vines during the long growing season, this soil produces a highly colored grape having excellent flavor. 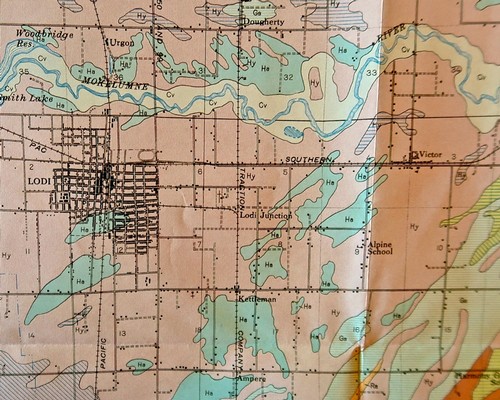 This cut-out from Cosby and Carpenter's 1937 Soil Survey of the Lodi Area traces pockets of "fine loamy sand" (in blue) found among the fine sandy loam areas (pink) east of the City of Lodi, stretching south of the community of Victor (top-right corner) in a triangular configuration.

These findings comport with the observations of many of the Lodi grape growers of today. Paul Verdegaal, Cooperative Extension San Joaquin County farm advisor emeritus for U.C.’s Integrated Viticulture program, has observed that "the deep, well-drained soils that dominate the AVA are mostly fine sandy loams, but the alluvial flows of the Mokelumne [River] have also created fingers of more coarse-textured loamy sands, fine sands, and loamier soils.”

A major factor, adds Verdegaal, is that these soils provide “growing conditions for vine balance and quality fruit with minimal inputs,” which was one of the reasons why Lodi was the first viticultural area in the U.S. to formalize third-party certified sustainable practices, called LODI RULES for Sustainable Winegrowing. 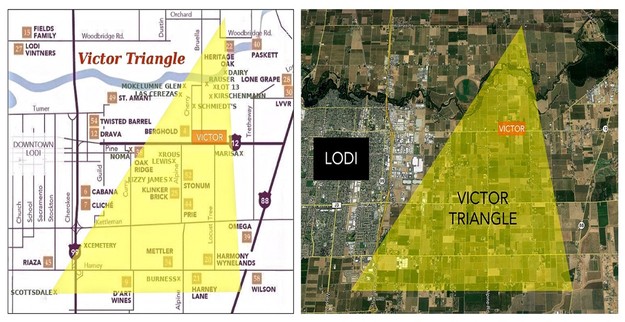 Rough, unofficial coordinates of a "Victor Triangle," where the sandiest pockets of Tokay fine sandy loam are found, along with a good number of Mokelumne River-Lodi's oldest and finest old vine plantings.

Craig Rous, the owner/grower of Rous Vineyard and the former winemaker/GM of Lodi's Bear Creek Winery, has been credited with giving a name to the areas on the east side of the city that are better described as having "loamy sand" rather than "sandy loam." Rous gives his own name to this part of the Mokelumne River AVA, calling it the "Victor Triangle," since these pockets of extremely deep (as much as 90 feet), beach-like sand generally fall in a roughly triangular area just north and south of the community of Victor, located along Victor Rd./E. Hwy 12.

The loamy sand variants of Lodi's Tokay series soils are far from uniform. The sandiest "dunes," so to speak, are found in the vicinity of Alpine Rd. on Lodi's east side (well-known examples include Harney Lane Winery's Lizzy James Vineyard, plus old vine blocks owned by Charlie Lewis, Klinker Brick Winery, and Mettler Family Vineyards). 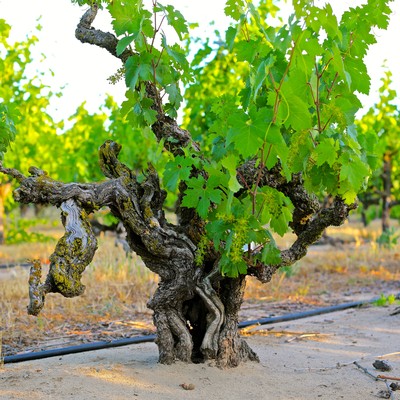 Zinfandel was planted in 1904 in Harney Lane Winery's Lizzy James Vineyard, located in the center of the sandiest mounds within the so-called Victor Triangle, on the east side of the Mokelumne River-Lodi AVA.

The southwest corner of Rous' Victor Triangle probably laps up to the railroad tracks near Scottsdale Rd. (or Costco, for all you bulk shoppers), and the northern corner falls in the oxbow running down Bruella Rd., where the Mokelumne River surrounds plantings on three sides (including vineyards such as Kirschenmann, Lot 13, Mokelumne Glen, Bokisch's Las Cerezas and Vino Farms' River's Edge are located).

Patches of loamy sand are also found in and around Sargent Rd. (just west of Deshmesh Darbar Sikh Temple, on properties farmed like families such as the Frys, Borras, and Manasseros). Rous would not put the loamy sand pockets found near Sargent Rd. within his so-called "Victor Triangle" — he is, after all, an east-side Lodi grower, and the Sikh Temple happens to fall on the west (or "wrong") side of the tracks — but it is no coincidence that many of Lodi's own-rooted, old vine plantings of not just Zinfandel but also Carignan, Alicante Bouschet and surviving Flame Tokay happen to fall on these sporadic mounds or "dunes." There are, in fact, smaller patches of loamy sand found on the west side of Lodi. 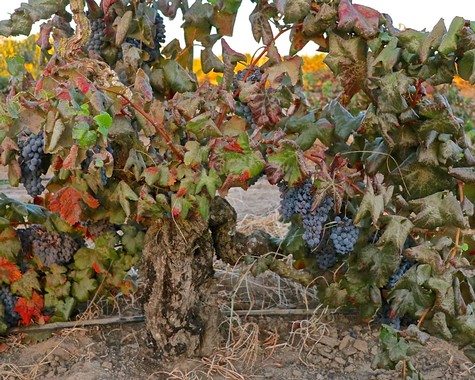 As it were, not all of the plantings plopped smack dab in the middle of these favorable pockets of sand are well defined or mapped out. Lodi growers are aware of the soil distinctions in their vineyard blocks, even if they might not speak about their soil types in these terms. But they exist, and that fact bodes well for the ever-evolving profile of the Lodi Viticultural Area as a source of unique and special terroirs.

The region's oldest surviving blocks Zinfandel, as well as Cinsaut or Carignan, happen to fall in the deeper patches of sandy loam or loamy sand (see Lodi's single-vineyard wines, Part 1 and Part 2). Many of them are known to produce wines expressing terroir, or "sense of place," and this is what adds up to wine regions with a sense of distinction or authenticity. Lodi has that, even if much of the wine world may not yet be aware of it (we're working on that). 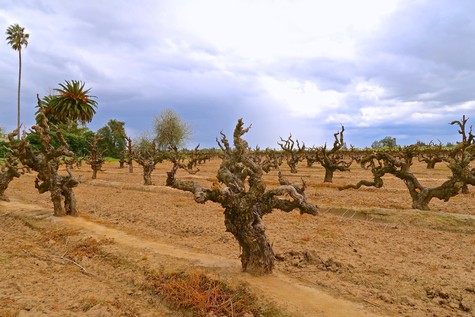 Lodi has a rich history going back long before the existence of farms and vineyards along the Mokelumne's riverbanks. This was where towering valley oaks, lush grassland, and teeming wildlife originally allowed indigenous tribes to prosper primarily as gatherers (Mokelumne is a rough translation of the native Miwoks' word for "people of the fishnet").

If anything, this is what we know: Wherever you find the deep, rich fine sandy loam soil that was once supportive of this generous, natural environment, you can also farm vigorous, long-lived grapevines capable of producing wines that can be described as uniquely "Lodi." 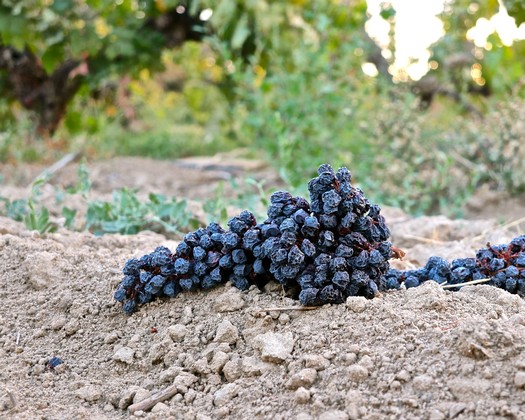 Discarded Zinfandel from the 2021 harvest in Viola's Vineyard, a Historic Vineyard Society-certified planting located on a sandy loam bench along the south banks of the Mokelumne River in the Clements Hills AVA.