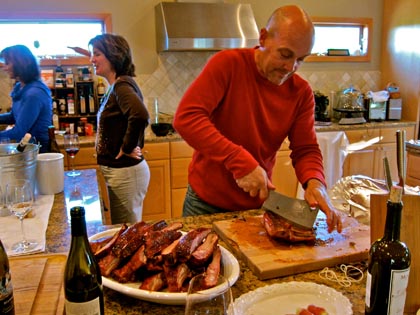 ZAP – the Zinfandel Advocates & Producers organization that has done more to popularize the joys of California Zinfandel than anything in the world, apart from the wines themselves – knows where its bread is buttered.

Zinfandel has become an everyday go-to beverage around the world (they’re even rocking with it in places as far-off as Shanghai and Stockholm, Berlin and Bombay…) not just because the grape produces a truly fine and delicious red wine, but also because at its very essence is the bare naked fact:  Zinfandel makes an incredible barbecue wine.

We love barbecue, the Swedes and Chinese love barbecue, even vegetarians love barbecue (re Lodi News-Sentinel’s Grilling goes meatless), as long as the taste of the grill is there (meat or no meat!).  There’s something about the char, the sizzle and smoke of grilled foods, with all the associated sensations of marinades, sauces and spices, that makes American Zinfandel all the more indispensable. 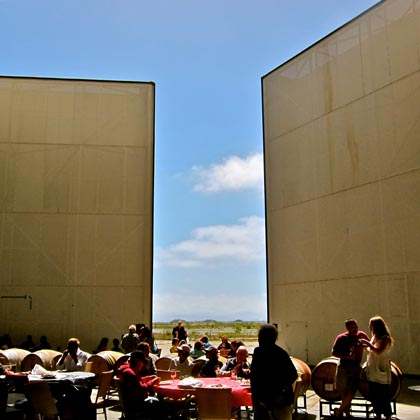 Recognizing this elemental culinary role, ZAP is holding its second annual Grille O-Rama this coming Saturday, August 11 (2-5 PM) at the Rock Wall Wine Company in Alameda, looking out at the glimmering waters and Bay Bridge connecting Oakland to San Francisco.

For Lodilubbers, the important thing to know about Grille O-Rama is that Lodi will be well represented by seven wineries that draw heavily from this American Viticultural Area (including Macchia, Klinker Brick, Jessie’s Grove, Cycles Gladiator, Brazin and Gnarly Head), plus some 25 other zin specialists based out of Napa, Sonoma, the Bay Area, Foothills and Central Coast of California.

Chefs from at least five restaurants will also be offering a wide variety of barbecued foods for you to enjoy and even vote on “Best Grill Master” – including the Pan-American style BOCANOVA in Oakland, the Southern inspired PICÁN in Oakland, and the fiery Sonoma Smokehouse in Sonoma.  There will also be a guest celebrity chef/educator, Tyler Stone of House2Home magazine, who will be sampling you on his grilled short ribs with chimichurri sauce (please see recipe below). 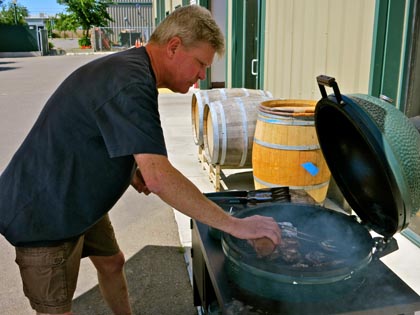 To register for Grille O-Rama, be sure to visit zinfandel.org.  Meanwhile, some thoughts on just why Zinfandel is absolutely the best barbecue food wine in the world:

Let’s start our discussion with the pièce de résistance, the meditative mosh, the gleam or apple-in-the-eye of every barbecue-meister’s arsenal:  smoked baby back ribs, or any parts thereof the domesticated (or wild, if you can kill it) sus, like the tender loins or pulled shoulder, which respond famously to things like open or closed grills, plus tomato based sauces, laced with vinegar, brown sugar, onions, and often, chili spices, Worcestershire and other heady ingredients.

If this sounds like an avalanche of food sensations, that’s because it is; which is precisely why red wines like Zinfandel – with its avalanche of lusciously ripened and spicy fruit, unrepentantly full bodies and, often enough, strong yet soothing surges of tannin and sweet oak – exist in this world.

No, this is not delicacy or finesse, like you expect in a good Pinot Noir; nor is it all about the ability to age and mature gracefully in the bottle, like you expect out of wines made from Cabernet Sauvignon.  Zinfandel is a rambunctious gangbuster, and because of that it does not get overwhelmed by pork barbecues like Pinot Noir, and it does not fight the sweet, spicy, fatty, even sour sensations the way hard, tannic cabernet based reds usually do. 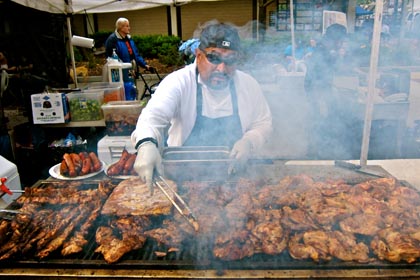 Read our lips:  there’s nothing like a big, fat, juicy, jammy Zinfandel, with the blackpepper/clove/cinnamon spices to match the peppercorn or chile spice sensations of classic American barbecued pork.  In our experience:  the bigger, the fatter, the juicier and even jammier the Zinfandel, the better.  Barbecued pork dishes demand this!

Especially sticky baby backs or individual ribs cut to retain their soft, chewy cartilage at the ends that you can dip in sweet/spicy sauce and suckle like a baby.  For this, you can get serious and go for ultra-premium styles of Lodi grown Zinfandel like Harney Lane’s Lizzy James, Michael~David’s Lust or Earthquake, Macchia’s Serious, or m2’s Artist.  But really, you can do just as fine with Zinfandels in the $10 to $18 range:  like Michael~David’s 7 Deadly Zins, Jessie’s Grove’s Earth, Zin & Fire, the ubiquitous Gnarly Head, the dependable LangeTwins, the fruit driven Valhalla, a lush Klinker Brick, or a sleek and scented Heritage Oak.

But maybe you don’t like wet, sticky sauces; preferring, instead, the barbecue connoisseurs’ version of refinement:  slabs of dry rubbed ribs, coated with variations of “secret” rubs (usually involving paprika, onion powder and cayenne, and taking it from there), then sloooooow roasted to achieve extremely earthy and caramelized flavors.

Either way you slice it, it’s still a sensory overload – dryer, yet powerful – very much in need of the peppery spiced qualities you get in more pungent red zins.  Like some of the more refined, single vineyard Lodi bottlings:  the likes of Macchia’s Luxurious (made from violet and multi-spice scented Rous Vineyard fruit), Ironstone’s Centennial (also from Rous Vineyard), Maley Brothers (an essence of black velvet and Lodi’s loamy earth), McCay’s Jupiter (gorgeous texturing), or Klinker Brick’s Old Ghost (ethereal mocha spices). 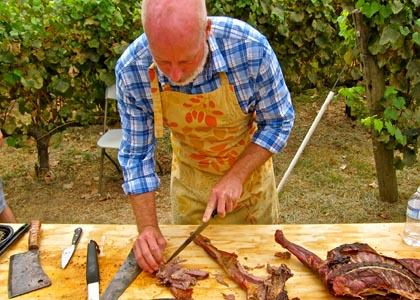 Of course, even chicken is magically transformed when it hits the grill or smoker.  Visitors to the Hawai`i are often enthralled by what they call huli huli chicken:  whole halves of the bird marinated in mixtures of soy sauce, lime, ginger, brown sugar or honey, and a touch of cayenne or sambal, then generously rubbed with rock salt and charcoal grilled.  Can taste just as great in Lodi as it does in the Islands!

Southerners like to rub whole chickens with salt, pepper, paprika, cayenne, white or brown sugar, dry mustard, garlic and onion powder, but it is the slow roasting that absolutely inundates the meat with nostril penetrating smoke, especially when served with those bodaciously sweet, sour, spicy, savory Southern sauces.

Either way, this aggressively smoked cookery absolutely demands a red wine teeming with fruit and, even, pungently sweet and toasty oakiness.  Who gives a pork butt about what those contemporary critics say, when they complain about Zinfandels being too “ripe,” oaky, or alcoholic?  Wusses.  You often get the feeling that these hoity-toities really aren’t drinking their Zinfandels correctly, which is with food, not with baby fingers pointing in the air. 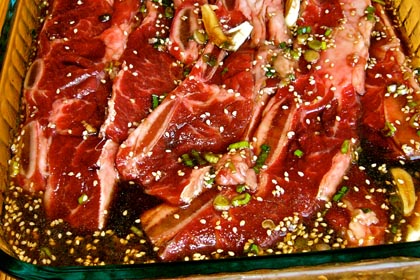 What do you think you’re supposed to drink with barbecues involving those delicious soy sauce based marinades, laced with fresh perfumed ginger root, garlic, juxtapositions of sugar and salt, along with sesame seeds, chili spices, green onions, and things like rice wine vinegar, ponzu and yuzu?

We’re talking, of course, about Japanese teriyaki, and those fantastic Mongolian and Korean style (kalbi) barbecues involving lightly charred,, flaky salmon or marinated unagi (eel) or black cod, served over steaming mounds of rice.  Or else, thin slices (skirt, hanger or sirloin) of beef, or chunkier slices of beef short ribs (flanken or butterfly cuts), still hanging off the bone – bathed in sauces and seasonings that touch every part of the palate, giving sweet, sour, spicy, salty, bitter and even umami (i.e. “delicious”) sensations.

Whether fish, fowl or red meats, multi-sensation Asian style beef barbecues especially likes a smoother, gentler, fruit driven style of red – like Harney Lane’s entry level Lodi Zinfandel, which is blended with Primitivo (almost 50%), making the wine all the more plump, juicy and succulent.  Primitivo is actually a clonal variant of Zinfandel – a kinder, rounder version, if you will – perfect for smoky beef bathed in fragrant Asian marinades.  The proof?  It’s in every bottle of Primitivo by wineries like Uvaggio, Ripken or Sorelle:  meaty, beaty, bouncy reds that sing for their grilled suppers.

Are we getting you worked up enough yet?  Well then, you gotta check out ZAP’s Grille O’Rama, and join the zin specialists of Lodi and from elsewhere in California to celebrate wine and food at its most exhilarating. 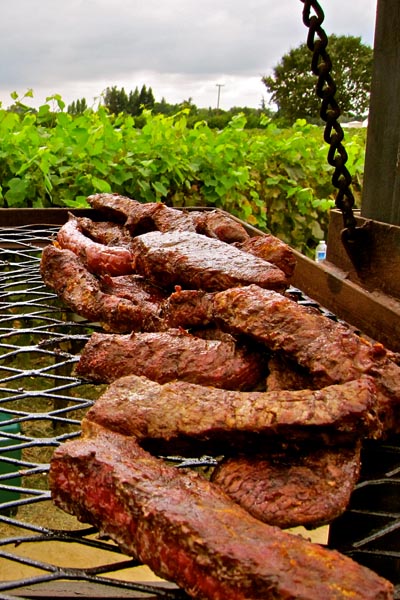 Pre-heat oven to 350 degrees F.  Heat a large heavy bottom pot or dutch oven on high heat.  Season the short ribs with salt and pepper and lightly coat with oil.  Sear the ribs on all sides until a dark brown crust forms on the outside of the short ribs.  Cover the ribs with chicken stock and cook in the oven for one and a half to two hours or until the ribs are cooked through.

While the ribs cook, place the parsley, cilantro, shallot, garlic, red wine vinegar and olive oil in a food processor.  Season with salt and pepper to taste and blend on high speed.  The food processor leaves a chunkier consistency but if you like a smooth sauce use a blender.

Pre-heat a charcoal grill to high heat.  Remove the short ribs from the pot when done and sear on the grill until nicely browned on all sides.  Serve the short ribs with chimichurri sauce.  Yields about 4 servings.

All about the zin in Lodi...