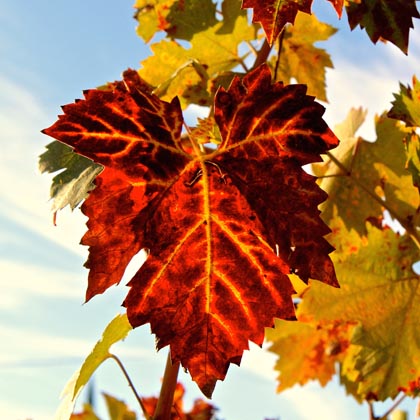 This time of year, to borrow a little from John Keats‘ phraseology, is when beaded bubbles are brimming in the bins, and winemakers are smiling with purple stained mouths. Wine flows so much like poetry in California, you almost forget that it is still an agricultural product, and that Mother Nature always has the first, and last, word on everything.

So it was with the 2014 harvest in the Lodi AVA, drawing to a close as we speak – a good two to three weeks ahead of the usual schedule. Generally speaking, both growers and winemakers have been pleased with the results. Earlier harvests mean less chance of inclement fall weather and rot, and quality was on the higher side: well matured fruit (ripe without being overripe) and zesty acid balances.

This year we were able to get out into the fields and garner some exciting play-by-plays from a few of the vintners themselves. The following is a compilation of videos that not only furnishes insights on vintage 2014, but also fascinating glimpses into frantic harvest activity: vividly demonstrating what really goes on in the vineyards and wineries.

In the early morning hours of August 26, 2014, Morgan Twain-Peterson of the Sonoma based Bedrock Wine Co. was positively enthusiastic about what he was getting from Stampede Vineyard – a 1940s-era own-rooted Zinfandel planting located in the hills of Lodi’s Clements Hills AVA. Click on this image to hear what Mr. Twain-Peterson had to say: 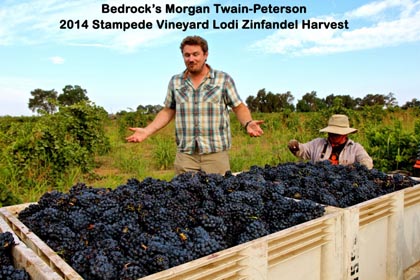 Two days later – on August 28, 2014 – we were out at the break of day to watch the yearly harvest of the historic Bechthold Vineyard: the oldest continuously farmed vineyard (planted in 1886, completely to Cinsaut grapes) in the Lodi AVA. As usual, Becththold proved to be a harbinger of the entire vintage, which has given us lower yields and (in Onesta Wines winemaker Jillian Johnson’s words) “much more concentrated fruit.” With dawn’s early light forming a halo behind her head, here’s what Ms. Johnson had to tell us: 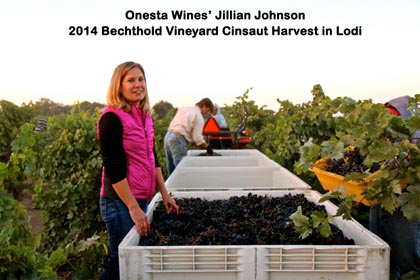 One of the most unusual wines grown and produced in Lodi – and in fact, in all of California and the U.S. – are the light, airy, crisp, dry white wines made from the Kerner grape, in which Borra Vineyards winemaker Markus Niggli has recently come to specialize. The grapes start off looking as pretty and pristine as the wines, which Niggli native yeast ferments, they end up being. Click on this image to get Mr. Niggli’s impressions of the 2014 Kerner harvest in the Mokelemne Glen Vineyard: 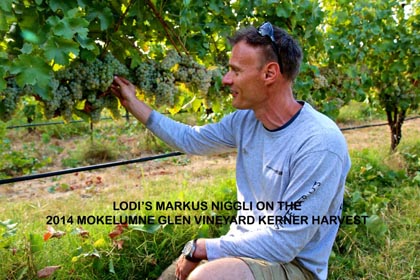 On September 3, 2014, Rous Vineyard owner/grower Craig Rous summarized the vintage by telling us, “There’s not much growth… the crop is looking really nice, but there’s not an awful lot of it.” Here’s what else Mr. Rous, along with Macchia Wines‘ Tim Holdener and McCay Cellars‘ Mike McCay, had to say about this short yet exceptionally promising vintage: 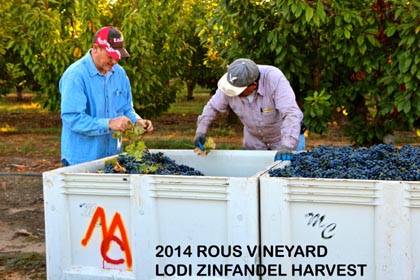 On September 4, 2014, Zinfandel grapes from one of Lodi’s all-time classic growths – Mohr-Fry Ranches’ Marian’s Vineyard (own-rooted vines planted in 1901) - were brought into St. Amant Winery. We posted two videos of this event – one showing what it takes to pick these fantastic ancient vines, and the other showing the intimate handcrafting going on in the winery. First, here is St. Amant winemaker/owner Stuart Spencer talking about the quality of the grapes: 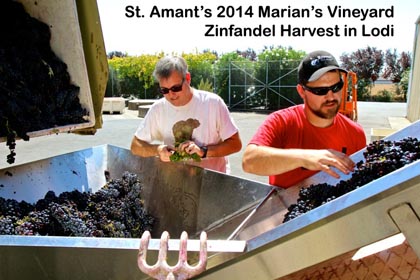 And our second video, focused on Marian’s Vineyard itself, and the heroic labors and amazing feats of dexterity that it takes to pick these amazing 113-year old vines: 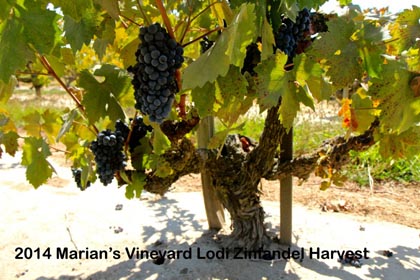 McCay Cellars winemaker/owner Mike McCay’s approach to winemaking involves getting into “the mind of Mother Nature.” He starts by selecting fruit from some of Lodi’s most venerated plantings – from vines so old, they practically monitor their own yearly production – and then implementing less intrusive winemaking techniques such as whole berry/partial whole cluster/native yeast fermentation. Click on this image to find Mr. McCay talking about the Lodi Grenache and Cinsaut harvested on September 5, 2014: 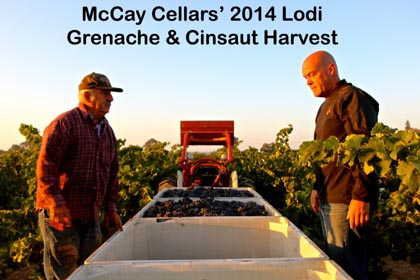 Oh, for a draught of this upcoming vintage, which will undoubtedly prove to be as memorable as these images.