Visit Estate Crush for wines as plump as Christmas 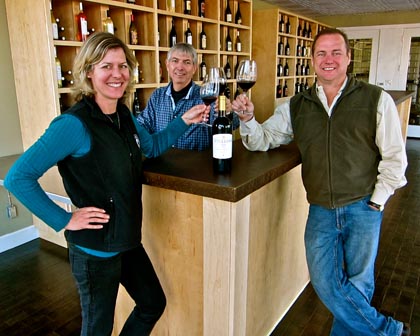 Have a hankering to taste some super hand crafted Lodi grown wines this weekend?  Estate Crush — Lodi’s 16,000 square foot custom crush facility — will quietly open its tasting room this weekend (Dec. 10-11, 12-5 PM) at the corner of Lockeford and Sacramento (the north end of Downtown Lodi).

What is Estate Crush?  It’s an urban winery of sorts, with its own on-site winemaker and cellar crew who produce and bottle small lots of wine for other wineries as well as private individuals — among the latter, some of Lodi’s most respected growers who like to have small lots of wine produced from their own grapes to show what their vineyards are capable of producing.

In fact, you too can have your own wine produced and bottled at Estate Crush, given the wherewithal to come up with as little as 1 ton of grapes (roughly equal to 2 barrels, which would give you about 50 cases total).  You would work with Estate Crush’s impeccably credentialed winemaker, Matt Ridge, to customize the wine to your liking; and he — along with Estate Crush owners Nick and Sandy Sikeotis, and Bob and Alison Colarossi — would take care of all the technical details (assembly required, but not necessarily the expertise!).  Who knows?  You just may find your calling, or end up being the next Tim Holdener or Heather Pyle, Randy Dunn or Randall Grahm, Helen or Larry Turley…

At the moment Estate Crush has a total of 65 clients utilizing their state-of-the-art facilities (all the bells and whistles, including sorting tables that allow you to inspect your fruit berry by berry before going into the fermenter, should you be fanatical enough).  Example:  Bob Lauchland, longtime fanatical Lodi winegrower (in partnership with brother Richard Lauchland) as well as Lodi Winegrape Commission’s current Executive Committee Chair, has his own “Crazy Legs” Zinfandel produced at Estate Crush — a crazy fun drinking 2009! 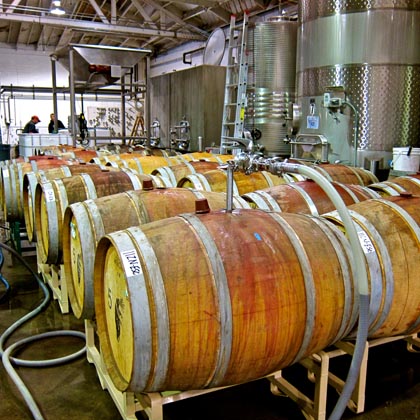 The Estate Crush tasting room’s official ribbon cutting takes place December 17 (after which, hours will be Fri.-Sat., 12-5 PM), but why wait?  Stop by this weekend to say hello to Nick, Sandy, Alison or Bob, and they’ll offer no less than 33 Estate Crush produced wines to buy or taste (three different three-wine flights, $3 per flight, with fees waived with purchase).  Some notes on some of the wines being offered: 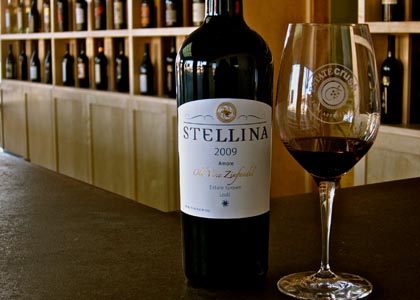 2010 Estate Crush, Lodi Chardonnay ($18) – Do you prefer Chardonnay with zero oak aging (sans butter or char), with an emphasis on the pure, fresh apple/pear-like quality of the grape?  Here’s your wine, in an easy drinking, crisply balanced, medium bodied package, just screaming for something like balsamic marinated grilled filets of white fish.

2009 Stellina Amore, Lodi Old Vine Zinfandel ($24) – Estate grown off Lucas Rd. on Lodi’s west side, and produced by Estate Crush partners Bob and Alison Colarossi, this is feminine style of Zinfandel expressing sexy silk, lace and raspberry perfume in a slender medium body, with a zesty mild acidity and whispers of cracked pepper spice.  In fact, we think of peppercorn grilled salmon, although a nice tenderloin of beef in pomegranate juice laced Zinfandel deglaze would not be a bad idea either.

2009 Viñedos Aurora, Lodi Petite Sirah ($21) – From a vineyard owned by Estate Crush client Gerardo Espinosa, this purplish beauty has what Bob Colarossi calls that “Lodi je ne sais quoi” — he doesn’t know how to describe it, but it’s totally delish!  We’ll take a stab by saying that the nose is of decadent chocolate covered blueberries, and the wine tastes as thick as Christmas pudding, plump and juicy enough to roll around in the mouth, no problème.

2010 Phoenix Ranch, Bechthold Vineyard Lodi Cinsault – This red wine has so much going for it, it’s ridiculous.  Produced at Estate Crush in collaboration with Phoenix Ranch‘s own winemaker, Jillian Johnson-Phoenix (who worked for many years as Randall Grahm’s winemaker at Bonny Doon), the grapes come from a 20 acre vineyard that was originally planted by Joseph Spenker in 1885 (Spenker also planted Jessie’s Grove Royal Tee in 1889).  So what you have here, folks, is not just a richly rounded wine of almost caramelized rusticity, but also a living, liquid taste of history — imagine drinking a wine made from vines originally put in the ground the year Grover Cleveland was inaugurated president and Sitting Bull was just joining Buffalo Bill’s Wild West show.  Today, Bechthold Vineyard is owned by Spenker’s great granddaughter Wanda Woock and her husband Al Bechthold (Estate Crush partner Sandy Sikeotis’ family), and is lovingly farmed by Kevin Phillips of Michael-David Winery.  All hail Lodi history! 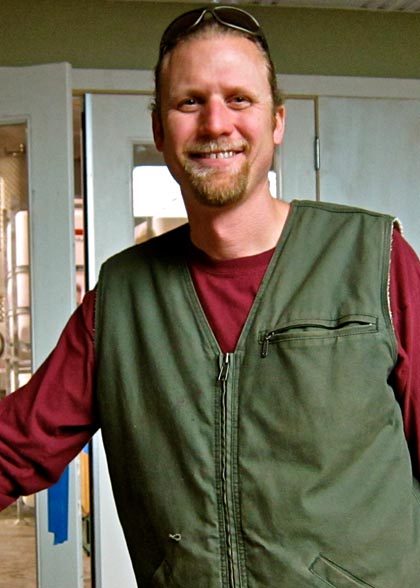