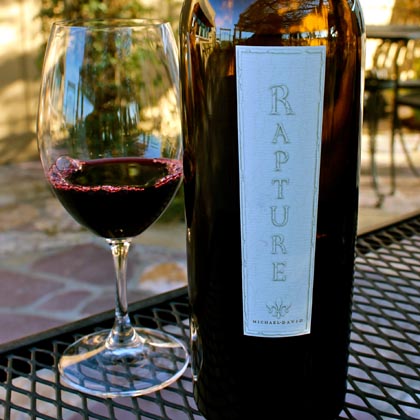 It seems like just yesterday that Michael~David Winery was one of those little Lodi wineries that could.  We still have lots of those kinds of producers, but the company driven by brothers Michael (CEO/owner) and David (President/owner) Phillips now do things on the scale of hundreds of thousands of cases – still peanuts compared to Woodbridge by Robert Mondavi (over 8 million cases), but dwarfing the 2,000 to 10,000 yearly cases by Lodi’s m2, Macchia, McCay, The Lucas, Bokisch and Harney Lane.

The positives have been resounding:  Michael-David has been doing for the Lodi wine industry what wineries like Robert Mondavi did for Napa Valley in the sixties and seventies.  It’s amazing to think that you can now walk into a hotel bar in Chicago or Miami – for that matter, a wine bar in Tokyo or Hong Kong, or an smoky underground bar in Stockholm or Berlin – and order the Phillips’ Lodi grown 7 Deadly Zins ($16) by the glass.  Lodi is, like, everywhere…

Even more amazing is the fact that thinking big, for Michael-David, has always been more of a quality as opposed to quantity driven concept.  For all the boxes of 7 Deadly Zins they might ship out, just as much effort is spent on producing ultra-premium quality wines going under pricier labels like Earthquake ($26), Inkblot ($35), Lust ($60) and Rapture ($59).

And they’ve never made any bones about why they produce wines like the latter:  they have been out to prove that Lodi can grow wines as good or better than any other region in the world, be it Napa or Sonoma, Walla Walla or Bordeaux, Maipo or Barossa. 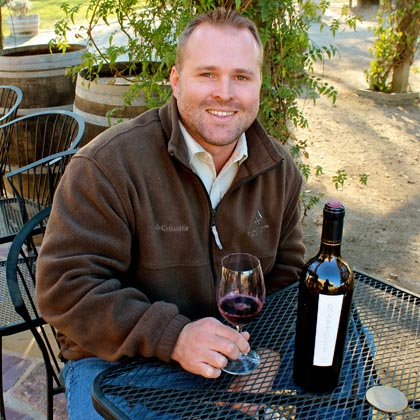 Case in point:  the 2009 Michael-David Lodi Rapture ($59), a Cabernet Sauvignon which earlier this month took a double gold (meaning, proclaimed a gold medal winner by an unanimous voting of judges) at the 2012 San Francisco Chronicle Wine Competition.  This is a big deal because Rapture was judged in a price category ($50-$59) stacked with Cabernet Sauvignons from Napa Valley or Sonoma County.

While acknowledging that since their first vintage of Rapture (a 2003), the idea was to “compete with the best Cabernet Sauvignons in the world,” Michael-David winemaker Adam Mettler also says, “we’re not exactly trying to produce a Napa Valley style Cabernet Sauvignon.  We have our own style of Cabernet Sauvignon in Lodi – one that’s a little softer, and more fruit forward than what you find in Napa Valley.”

“Because our ripe fruit can be a little soft, we usually blend up to 8%, 9% Petite Sirah in our Rapture.  Each year we select our biggest, darkest, most tannic Petite Sirah to go into our Rapture program.  Unlike Syrah, Petite Sirah is just enough of a blank slate to compliment Cabernet Sauvignon, without taking anything away from the Cabernet character.” 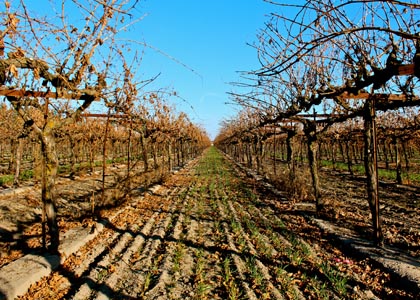 The living, breathing source of Rapture, on Lodi's westside

Our own tasting notes on the 2009 Rapture:  pungent blackberry aroma with flourishes of blueberry, black tea, Mexican cola, and cedary oak; on the palate, there is a velvety, broad, full feel without being heavy or harsh, the enriching sensations of sweet oak filling out a lavish sense of varietal richness.

“I remember tasting our first vintage (2003) just after fermentation,” says David Phillips, “and it just seemed, well, ‘rapturous,’ almost like religion.  So we ordered absolutely the best French oak barrels from each of the top French coopers to see what would work best for the wine.  We gave it the name Rapture for the religious connotations, designing the label with a parchment look.  The idea was a little edgy, maybe controversial, but everyone seems to have liked it – I’ve had a number of people tell me that they have even given their pastors a bottle!”

In respect to Rapture’s oak regime, Mettler tells us that it’s strictly all new, tight grained, center-of-France-forest wood, weathered 24 to 30 months outdoors before coopering with medium to medium-plus toast (i.e. the inside char that gives barrel aged wines their slight smokiness).  “Each year we select our best Cabernet Sauvignon lots just after fermentation, and those go immediately into these new barrels,” says Mettler.  Production was about 300 cases in 2003, and by 2009 had grown to over 1,000 cases.  Yet the Rapture continues to sell out, and so in 2010 production will go up to 1,200 cases.

Of course, all top quality wine, no matter where it comes from, is always something grown, not conjured up by a winemaker’s tricks or from a figment of a wine marketer’s imagination.  Despite the fact that Michael-David buys Cabernet Sauvignon from growers throughout the Lodi region, according to Mettler, “the lots selected for Rapture have always come from pretty much the same 36 acre vineyard originally planted by Michael – a mature, bilateral cordon trained vineyard planted in east/west rows, on the west side of Lodi at the corner of Devries and Armstrong.”

Michael Phillips tells us that this vineyard, grown in the Mokelumne River AVA’s classic, deep Tokay sandy loam, was originally planted in 1985 for another big winery, but today all the fruit goes to Michael-David.  “It is a very low producing vineyard, yielding only about 4 tons per acre, because it is starting to get dead-arm disease (i.e. eutypa).  Despite the die-back, it still makes great wine, and it shows what Lodi can do with Cabernet Sauvignon!” 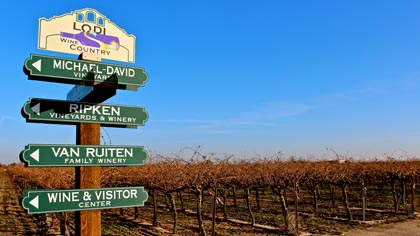