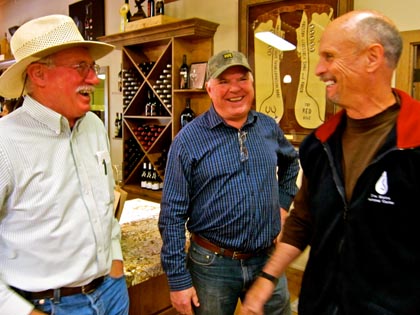 Jeremy Wilson – a sommelier who writes the Texas Wine Lover site and lives in the officially recognized Texas Hill Country AVA (approved in 1991), where he works for Kuhlman Cellars – recently wrote to us, telling us that he believes the Lodi AVA has a lot in common with the Texas wine industry. 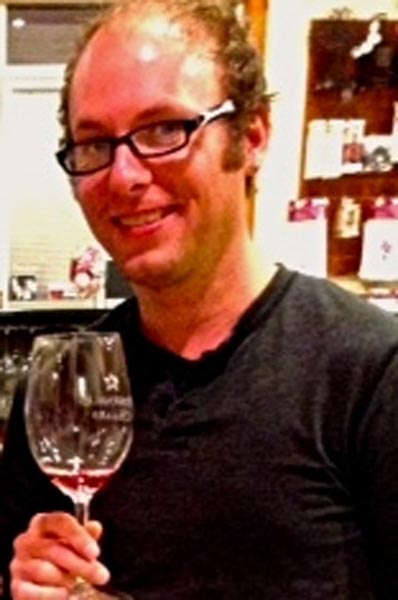 Not knowing a lot about Texas wines, we asked Mr. Wilson to help us catch his drift. His immediate response: "Our high quality winemaking movement is still so young that many people are totally unaware that we even have a wine industry in Texas. Our wines weren’t much to write home about even five years ago, but now we have really come to a point where many of the wines are just stellar!"

Our immediate response to Mr. Wilson was, whoa Nellie!: Lodi's "high quality winemaking movement" may be relatively recent – really only since wineries like Borra, The Lucas, Michael David and St. Amant started up in the '70s and '80s – but Lodi has a tradition of planting classic European wine grapes (i.e. Vitis vinifera) dating back to the 1850s. This ain't exactly our first rodeo.

Then we looked up "Texas wine" in Wikipedia, and read: "Some of the earliest recorded Texas wines were produced by Spanish missionaries in the 1650s near El Paso." That means the Texas wine industry pre-dates the earliest plantings by Franciscan missionaries in California, since they really didn't begin establishing missions along the historic El Camino Real until Junipero Serrra's Portolá expedition in 1769-1770 – more than 100 years after Texas!

Our curiosity piqued, we asked Mr. Wilson to expound a little bit more on Texas wines; and in turn, we would comment further on similarities to Lodi winegrowing. Our exchange:

Wilson: Texas and Lodi, California… two wine producing regions of the country that have both struggled with quality in the past but have recently become winemaking entities that command respect, quenching the thirst of aficionados across the country looking for breathtaking wines that are, quite frankly, a little outside the box. Thoughts of Tempranillo vines rustling in the wind at 3,500 feet elevation in the Texas High Plains AVA and gnarly head trained ancient vines in Lodi, California producing mouth watering Zinfandel – that is really what this story is all about. 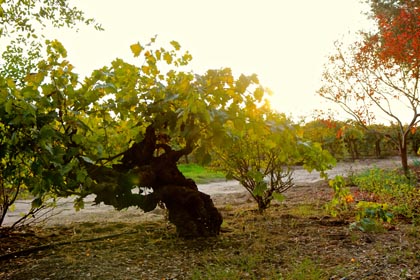 Unlike Texas, Lodi still has Vitis vinifera dating back to the 1800s, such as this Tokay plant in the historic Spenker Ranch (site of today’s Jessie’s Grove)

LoCA: We grant that Lodi has "struggled" during recent years to become better known for higher quality wine; but ironically, Lodi has never, ever struggled to actually grow high quality grapes. Lodi has a mild Mediterranean climate strikingly similar to other California coastal regions, such as Napa and Sonoma. For most of the last century, producers as big as E. & J. Gallo have been taking more than half of the wine grapes grown in Napa and Sonoma; but not because Napa and Sonoma were suitable only for the production of jug wines, but because Napa and Sonoma are darned good places to grow wine grapes, period. It's always been the same for Lodi, except now we are also transitioning to smaller production, ultra-premium quality wine – something Napa and Sonoma began to do in the '60s and '70s.

Wilson: To an outsider, images of the Lone Star State might capture all that is the Wild West. Roughnecks in cowboy hats, pearl snap button up shirts, and a trusty Blue Heeler standing at his or her side. I would be lying if I stated this were untrue to some extent, come on, we are Texas after all! Having said that, this enormous state holds a few of the largest and most populated and cultured cities in the entire country. It was inevitable that our old “burned out by Prohibition” wine industry was bound for a rebirth at some point, only this time around we have discovered grape varieties that not only grow well in this state, they literally thrive! Blend that fact with a solid winemaker and you have a recipe for world-class wines. 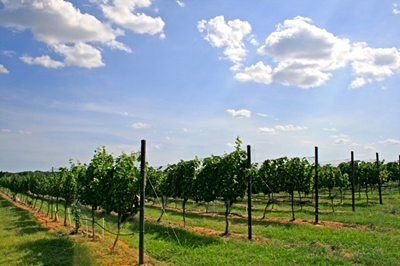 LoCA: On the subject of anything having to do with size, we would never mess with Texas; although don't forget, pearl snap-button shirts, denim skirts and cowboy boots are also popular in Lodi! But from what we understand, Texas is up to about 3,200 planted acres of Vitis vinifera, whereas there are over 100,000 acres in Lodi alone – easily more than any other single region in California (hence, the entire U.S.). So when it comes to wine grapes, we'd still have to consider Texas a mere babe in the woods… or plains.

Wilson: Texas wines have not always been that good. Honestly, our wines were arguably unpalatable for quite some time, not because the winemakers lacked skill and talent, but because we really didn’t know what grape varieties to plant in our scorching hot state that would consistently make fine wines. Texas saw what was happening in California several decades ago, so naturally we planted Cabernet Sauvignon, Merlot, Chardonnay, and Sauvignon Blanc, amongst several others. The blatant truth is, when you have a state that regularly sees 100-degree plus temperatures on a daily basis during the growing season with no real diurnal shift in many places, and a harvest that often begins the last week of July for the Texas Hill Country, you cannot really expect to have consistent harvests with proper ripening of the grapes unless these vines are Vitis vinifera properly suited for the heat.

We also suffer with unfortunate late spring frosts that threaten our vineyards nearly every year, and hail the size of baseballs that can wipe out entire crops. This brings us to modern winemaking in Texas: Tempranillo, Carignan, Tannat, Mourvèdre, Grenache, Viognier, and Vermentino, just to name a few – these are the varieties that are now carrying our current wine industry to the next level. And in my opinion, to the top actually. We are fighting the frosts each spring with wind turbines blowing across the vineyards; growers staying up half the night to keep bonfires ablaze upwind from the vines, and even resorting to freezing the precious grapes to insulate them from the crop threatening bitter cold. 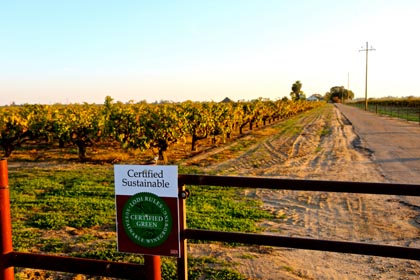 Over 20,000 acres in the Lodi AVA are Lodi Rules certified; such as Dave Devine’s pristinely cultivated LDL Vineyards Zinfandel, located on the gentle slopes of Lodi’s Clements Hills AVA

LoCA: Now this kind of smart talk – turning to alternative grapes – really does warm the cockles of our hearts, and we give props to Texan wherewithal. Although Lodi is warmer than California coastal regions closest to the Pacific, though, we've never had any trouble growing perfectly crisp, naturally expressive Sauvignon Blanc and Chardonnay, and soft yet exceptionally aromatic Cabernet Sauvignon, Merlot, or even Pinot Noir. But we can identify with Texas because, like the Lone Star State, lesser known, native Mediterranean grapes – like Carignan (actually, one of Lodi's heritage grapes), Tempranillo, Albariño, Tannat, Mourvèdre, Grenache, Viognier and Vermentino – have also resulted in some pretty exciting Lodi grown wines in recent years. Nowadays, Lodi grows some 75 classic wine varieties for commercial bottlings, and we've counted over 100 types of Vitis vinifera now being grown in the Delta for various purposes. On top of that, Lodi grape growers literally "wrote the book" on the sustainable viticulture which is now followed across the U.S. – over 20,000 acres (and counting) of Lodi vineyards are now third-party certified under the stringent Lodi Rules for Sustainable Winegrowing.

Wilson: The two largest and most notable regions in Texas are the Texas Hill Country AVA, located about an hour west of Austin, Texas, and the Texas High Plains AVA, which surrounds the Lubbock area of the Texas Panhandle. These two growing regions are both critical to viticulture not just in their location, but also because of their completely different and unique terroirs. The majority of wineries are located in the Texas Hill Country AVA, which ranges from around 900 feet to 2,300 feet in elevation at the highest points. Soils are very rocky with limestone, caliche, granite, and alluvial soils being prominent. Temperatures during the growing season can be well above the 100-degree mark during the day, and if you are fortunate, temperatures might drop down into the low 80s or upper 70s at night. This AVA is best suited for Mediterranean varieties, and reds are the most commonly planted grapes here; typically producing rich, concentrated wines with chalky minerality, ample tannins, and solid structure. 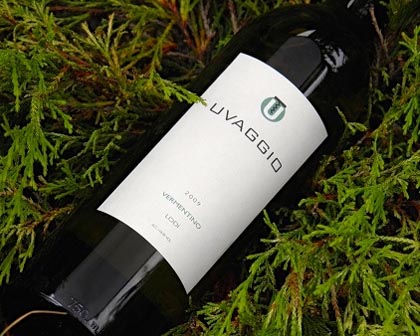 LoCA: Don't we know it… at the 2014 California State Fair Commercial Wine Competition, some 75 professional wine judges were blind-tasted on a deliciously crisp, minerally, natural tasting Vermentino by Duchman Family Winery, grown in their Texas Hill Country vineyards. Not only were we impressed, none of us had any inkling that it came from Texas. Most of us, in fact, thought it was European, or from a cold climate New World wine region like New Zealand!

Wilson: In addition to our extremely well made, world class wines, Texas recently made history when one of our wineries took home a very prestigious award from France. Pedernales Cellars‘ 2012 Reserve Viognier took a Médaille Grand Or ("Grand Gold Medal") at the 2013 Concours International des Vins à Lyon wine competition. The bottles were hand carried and flown directly to Lyon. How’s that for Bottle Shock II?

LoCA: My, my – just goes to show what happens when winegrowers really put their heart, soul, mind and (let’s be frank) moolah into it. The success of the Pedernales Viognier reminds us of what happened twelve years ago at Jerry D. Mead's New World Wine Competition, when about 75 of California's most discriminating wine judges unanimously voted a Lodi grown Syrah (a Delicato Shiraz, retailing for about $8.99 at the time) as their "Sweepstakes Award" winner – basically, the "Best Wine in the New World." Since then, it's never been surprising to see Lodi wines take double-golds, "best of class," and even more "sweepstakes" awards in competition after competition. We don't "dominate" the judging circuit – there's mighty fine wine grown in numerous wine regions these days – but we certainly hold our own.

The ancient Romans were the ones who coined the phrase in vino veritas – "in wine there is truth." In Lodi, we love it when wine judges – especially prejudiced ones – discover truth in the glass: that Lodi wines can be as good as any. No brag, just fact. We've also heard that in Texas a boastful man is "all hat and no cattle" – evidently, Texan winemakers are beginning to accumulate the cattle to back up their 10-gallon hats! 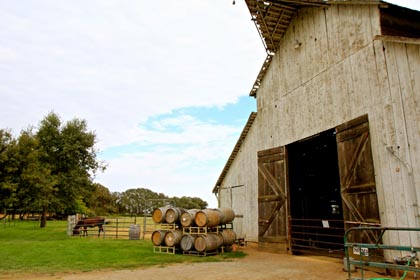