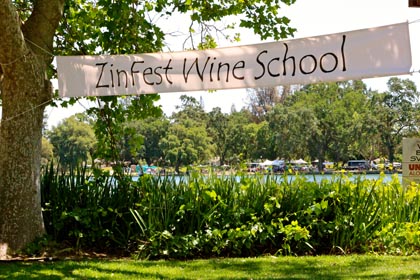 At the Lodi ZinFest Wine Festival taking place in the pristine riparian setting of Lodi Lake Park on Saturday, May 17, 2014, Lodi wine lovers will have the opportunity to taste and discover for themselves what the fuss is all about concerning the Lodi Native™ Zinfandels, which made their debut at the end of March.

All seven of the vignerons behind the Lodi Native project will present their wines under the ZinFest Wine School tent. The particulars… 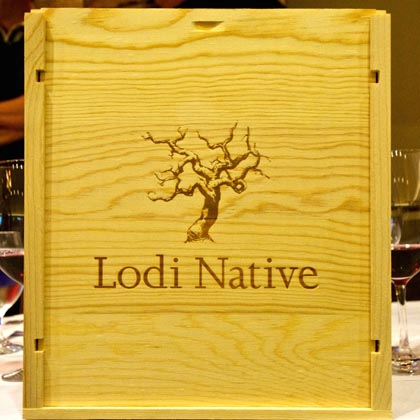 Lodi Native™ is a collaborative project of these six winegrowers of like mind, who all agreed to produce minimalist, terroir driven Zinfandels in California's Lodi AVA. This will be your chance to taste all six of the 2012 Lodi Native Zinfandels, and chat with the winemakers themselves.

If you are curious, a number of respected journalists have already filed thorough reports on the Lodi Native project (re our earlier post, Wine writers appreciate Lodi grown Zinfandel). There was also an excellent blog posted by Nancy Brazil and Peter Bourget of pullthatcork.com this past April 4.

In a piece entitled Lodi Native: A Zinfandel Project Reflective of the Vineyard, this wine writing couple wrote:

What happens when you remove the winemaker from the equation of making wine? Well technically nothing happens, no wine, just raisins. But consider this. What would happen if a group of Lodi winemakers got together, sourced Zinfandel from heritage plantings within the Lodi AVA, agreed to a specified winemaking protocol using what the group describes as "minimalist winemaking practices" to eliminate the winemakers' personal style, then submitted their wine individually to the group for approval by all members? A lot of hand wringing, heated debate, sleepless nights… yes, almost certainly. But in the end what resulted is a collection of six very special Zinfandels clearly expressive of each vineyard.

Brazil and Bourget went on to summarize the project’s history and protocol:

The seed for the Lodi Native project was planted in January 2012 when Randy Caparoso, sommelier and blogger for LoCA (the Lodi Winegrape Commission) gathered together a group of Lodi winemakers to taste their wines with a visiting New York sommelier. From that tasting, a discussion followed as to how Lodi might best highlight its historic Zinfandel vineyards. The goal of producing the most vineyard-expressive Zinfandel possible emerged. The emphasis was to be on the vineyard and the variety, not the winemaking style.

A winemaking protocol was established. Native yeast fermentation only and no inoculation for malolactic fermentation. No adjustment to acid levels. No addition of water or other methods of alcohol reduction. No new oak. "Old vines" (prior to 1962) preferred.

Six winemakers agreed to participate in the Lodi Native project. For some of the winemakers in the group this protocol represents a significant departure from their normal winemaking practices for others, not as much. All committed to making wine following this protocol, stepping outside of their usual comfort zone. 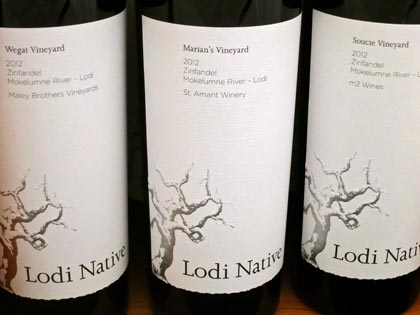 Six vineyards, all located within the Mokelumne River sub-AVA of the Lodi AVA are represented in this inaugural bottling. The Mokelumne River area is the historic heart of Zinfandel in Lodi, with original plantings dating back to the 1800s. The oldest existing vineyard was planted in 1888. The soil is mostly Tokay sandy loam, with some variation. Soil in the eastern portion of the AVA (east of Hwy 99) tends to be deeper, sandier soil. In the western portion, the sandy soil tends to be shallower and contain more organic matter.

The Lodi Native project and its wines were presented to the public for the first time on March 29. Zinfandel Advocates & Producers (ZAP) and Lodi Winegrape Commission hosted the presentation which included an educational seminar, escorted vineyard tours, winemaker reception and BBQ-themed dinner. The vineyards were wet, but beautiful, due to the rainy day…

To read the rest of Brazil and Bourget’s highly detailed report on the Lodi Native project’s debut on March 29, 2014, please visit their site at pullthatcork.com.

And of course, to experience these exciting, terroir driven Zinfandels for yourself, please see the Lodi Native group under the ZinFest Wine School tent on May 17th! 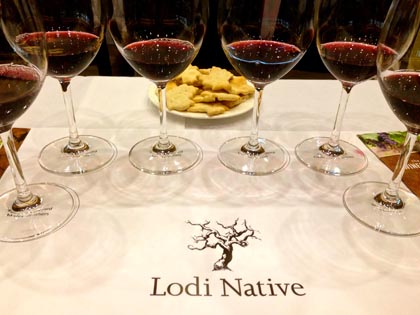 Debut of Lodi Native Zinfandels on March 29, 2014 (photo by pullthatcork.com)