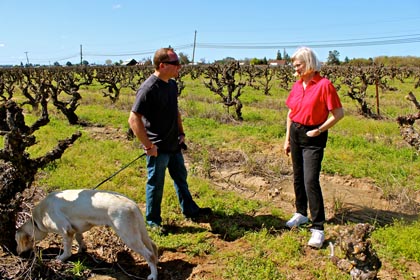 The 2009 Odisea California Temporary Insanity ($30) is a perfect example of how some of California’s most original, and quixotic, wine producers get hooked on Lodi; and why winemakers consider this American Viticultural Area increasingly where it’s at when it comes to winegrowing derring-do. 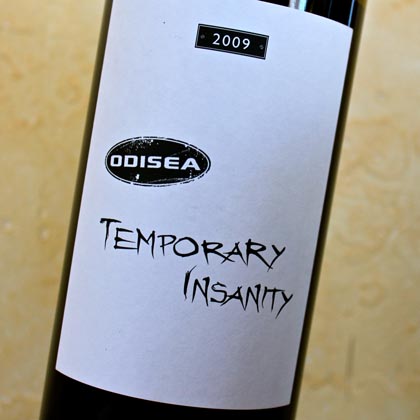 The wine itself:  an opaque purplish red that bursts of plum and blackberry preserves mixed with a dusty, resiny, pinched thyme/rosemary, nostril tingling earthiness that winemaker/owner Adam Webb also describes as “graphite-like.”  This earthen immediacy plunges deep into the palate:  dense, velvety, saucy texturings, revved up by a zesty, natural fruit tartness, and beefed up by fairly bullish tannin, adding chewy sensations to the delicious taste of fruit.  Exhilarating.

So you have to ask:  are these distinctive qualities derived from the fact that it’s Lodi grown fruit, or are they coming from the winemaking?  The answer is both; or rather, a reflection of a winemaking style that puts sensations of grapes and places above tastes derived from winemaking (what some people would call “manipulations”) itself.  For such young and energetic winemakers, this is a surprisingly mature approach – one associated more with, say, French vignerons, coming out of several centuries of experience.  Or as Leonard Cohen once said, after emerging from some five years of meditative life in a Zen monastery:  “the older I get, the surer I am that I’m not running the show.”

Mr. Webb himself would tell you that their “discovery” of Lodi grown Tempranillo back in 2004 came in serendipitous fashion:  a winemaker friend/mentor actually contracted delivery of Lewis Vineyard grown Tempranillo for them, without their knowledge, because he knew this was exactly what Webb and his partner, Mike Kuenz, were looking for when they started up Odisea.  Going back to why they called their project odisea – Spanish for “odyssey,” a journey of meandering sorts. 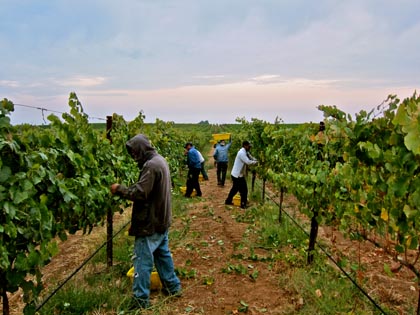 “Back then,” says Webb, “we really didn’t have the capital to take the fruit, but at the same time our attitude was that we were on a quest to make a wine of our dreams – something like Vega Sicilia or Pingus, two of Spain’s greatest red wines, which are made from Tempranillo.  So we rolled with it, and that’s why we began calling the wine ‘Temporary Insanity’ – there was very little of what could be considered rational about what we were doing.  We just closed our eyes, and there we went.”

Since embarking on their long strange trip, Webb and Kuenz have been going wherever they could find the most distinctive qualities of the grapes they love most:  Southern French varieties like Syrah, Vermentino, Grenache, Grenache Blanc, and the rarely sighted Grenache Gris; and Iberian grapes like Albariño, Verdelho, Tempranillo, and Graciano.  They have been landing in places as far flung as the Foothills of Amador County, valley floors in Napa and Sonoma, hilltops in Mendocino, and the rich Delta soils of Clarksburg.

Increasingly, however, they have been finding most of what they want in Lodi, which now makes up the majority (over 40%) of what they haul into their custom crush facility in Napa.  “We’ve been sourcing from 20 to 25 different vineyards each year,” says Webb, “and each of these vineyards are handled in at least two, three separate lots, and each lot aged in a variety of vessels – new barrels, neutral barrels (that is, barrels used for up to five vintages), or hogsheads, which are larger 300 liter sized barrels (regular sized “barriques” hold about 225 liters).” 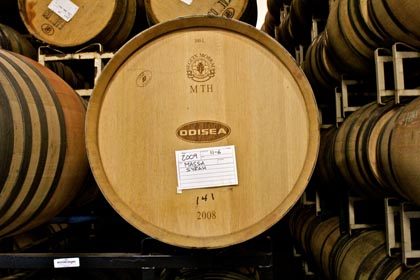 Webb keeps track of the myriad lots in his head (with the help of spreadsheets to help him find them in his winery), conjuring up as much as a dozen and a half wines each year – most of them blends, composed of two or three, sometimes five or six, different grape varieties each, and given names of varying degrees of insanity like “Veritable Quandry,” “Pape Rocks,” and “Unusual Suspects.”

All fine and dandy – been there, bought the t-shirt – but what makes Odisea even more different from the overwhelming majority of creative vintners working with Lodi fruit is their approach:  “our goal,” says Webb, “has always been to find unique sites to make small lot wines, and then letting the fruit and vineyard characteristics speak for themselves.” 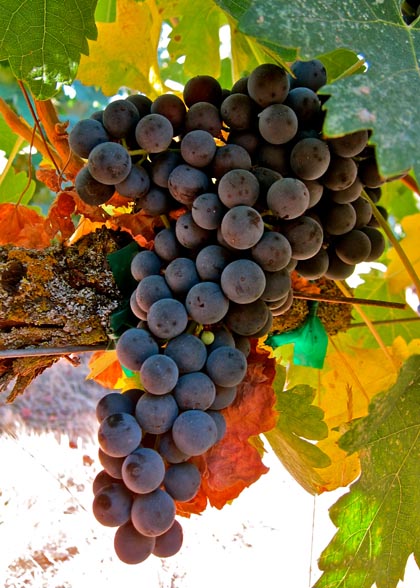 This means, for starters, fermenting all their wines on indigenous or “wild” yeasts, since Webb believes that yeasts growing naturally on skins of grapes are as much a part of a given vineyard’s morphology as the soil and climate associated with that vineyard.  In the same way that weather patterns dictate each “vintage,” the microbial aspects of natural yeasts – as unpredictable as they are, compared to the far more predictable use of inoculated or cultured yeasts – also determine what ends up in a bottle of Odisea.  Talk about “insanity.”

Then there is the matter of the élevage, or “raising” of the wines:  Webb is not into oak as a flavor, yet he truly believes in the miraculous oxidative power of barrel aging:  the process of rounding out tannins and binding anthocyanins and other phenolic compounds to amplify intrinsic fruit qualities and textures.  To achieve those ends, less than 10% of Odisea’s barrel regimes have been new (new barrels having the tendency to exert stronger oak flavors than previously used barrels).

Furthermore, over the past five years the only new barrels coming into the winery have been the 300 liter hogsheads, which have the advantage of increased beneficial oxidation (by nature of larger wine to surface ratio) while imparting milder oak flavors.  Says Webb, “in our experience, the quality – especially for wines like Tempranillo – is so much better with hogsheads.  Oak flavors are so much less aggressive in hogsheads, and have a way of integrating into the wines that allows them to be more expressive of themselves.”

Temporary Insanity is an Odisea flagship, but just one of their unique bottlings sourced primarily from Lodi.  A rundown on five more of their wines well worth the search; especially for wine lovers totally into wines that tastes of grapes, not wood.  Wines that are not defined by arbitrary constructs such as “varietal character,” thus enslaved by tastes more suitable to the masses rather than to the individual:

2011 Odisea, Dream Clements Hills (Lodi) Albariño ($18) – There was a time, not too long ago, when wine quality was always defined by volume and intensity; never brevity or delicacy.  Yet behold a plate a raw oysters, or cup of seviche:  would you rather have a big, fat, fruity white wine, or one that is spare, tart, and light on the palate?  Unequivocally, context changes perception, which is why it makes absolutely no sense to buy or choose wine based upon numerical scores that reward quantity, not qualities pertinent to, say, a grape like Albariño – which ideally is light, lemony, even sharp and steely – or a producer like Odisea.  Says Webb, “I want my Albariño for braised octopus, steamed clams, or anything with the smell and taste of salinity, like the ocean air I even smell in Delta regions like Lodi.” 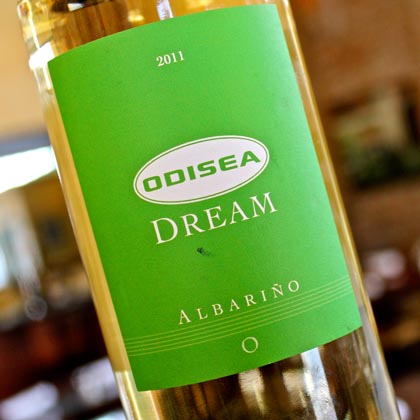 Webb also says they called this wine Dream because “it once seemed like a dream that someday anyone would be crazy enough to plant Albariño in California.”  It was Lodi’s Markus Bokisch who granted Odisea’s dream, with cutting of the vine culled directly from Galicia in Spain, birthplace of the grape.  Webb tastes pomelo, white peach and guava in his Dream – we find airy essences of lemon verbena, citrus and Hawaiian blossoms, couched in edgy tastes of crushed stone fruits.  The important thing?  How Dream can change how what we think of “quality” in wines.

2010 Odisea, Veritable Quandry California White ($18) – This meticulously blended bottling does not say “Lodi” on the label, but its veritable soul lies in its Albariño (30%) and Verdelho (24%) components, grown by the dreamweaving Markus Bokisch in Lodi (the balance is Clarksburg grown Marsanne and Viognier, and Shenandoah Valley Roussanne and Vermentino).   The “quandry” refers to Mr. Webb’s endeavor to craft a dry white wine that combines the vibrant, cutting edge of Iberian style wines (i.e. Bokisch’s Albariño and Verdelho) with the more unctuous, textured richness of the French varieties – through which he handsomely succeeds in this flowery scented, creamy textured wine, proffering a bouquet of tropical fruit and flinty minerality vis-à-vis the soft, almost pulpy sensations of the grapes enhanced by mildly puckering sensations of natural fruit acidity.

2011 Cochon, California Old Vine Rosé ($21) – Bottled under a sub-label – cochon being French for “pig,” in reference to time spent exclusively in hogshead barrels – 45% of this lovely, translucently pink wine comes from Lodi’s Bechthold Vineyard –ancient Cinsault vines originally planted by Joseph Spenker in 1886 (the balance is Grenache Gris from Mendocino’s McDowell Valley).  Collectively, an amazingly pure and nimble toed dry pink wine with nary the rough, harsh edge typical of the vast majority of dry rosés.  Instead, the wine simply flows and caresses the palate (its softness attributed by Webb to gentlest whole cluster pressing possible, plus three months spent in older, neutral hogsheads), tickling the nostrils with rose petal, a touch of anise, hints of strawberry and summer watermelon.  There is a contemporary style edge of tart acidity, leaving mouth-watering, lip-smacking sensations – underlining the slinky charms, with (especially) or without food, all the more 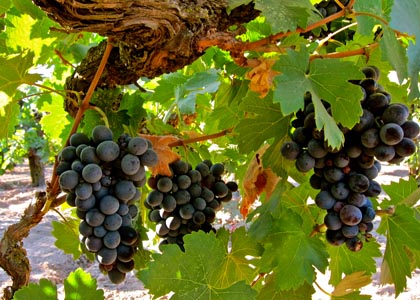 2010 Odisea, The Temp Clements Hills (Lodi) Tempranillo ($21) – The little brother to Temporary Insanity – The Temp being an even more promiscuous elucidation of the Tempranillo grape:  full of brightly lit aromas of red fruits like raspberry and black cherry; while underscored, as so typical of the grape, by wild, rustic qualities like leather, twiggy herbs, and roasting meats – the latter elements roaring up from the glass when placed in the context of gamey meats like lamb or venison, Oaxaca inspired braised pork, or even the pungent corn smut known as huitlacoche.  The feel is of round, fleshy, plump red fruits, unfettered by its mild tannin and oak influences (aged primarily in hogsheads).  A 100% varietal sourced from Bokisch’s Halecky and Liberty Oaks vineyards, complimented by fruit grown by Gregg Lewis.

2009 Odisea, Clements Hills (Lodi) T3 Tres Tintos ($25) – Strangely, this style of red wine has become increasingly rarer in Spanish regions like Rioja and Ribera del Duero where it originated, but where enthusiasm for Tempranillo has recently grown to a point where it has severely diminished usage of grapes like Graciano and Garnacha – the latter two making up 35% and 20% respectively of this wine.  The T3’s core is the 45% Tempranillo grown by Dancing Fox’s Gregg Lewis, which supplies the plump, juicy red fruit sensations.  The Garnacha (also from Lewis Vineyard) gives a distinctive, tingling peppery spice quality to the nose, while adding to the lush red berry fruitiness.  The Graciano (grown by Bokisch) contributes to the wine’s accessible, broadly textured, fluid qualities, while adding to undertones of composted earth and almost mocha-ish, roasted coffee smokiness.  Boiling it down to three words:  round, earthy, plush.  What more do you want? 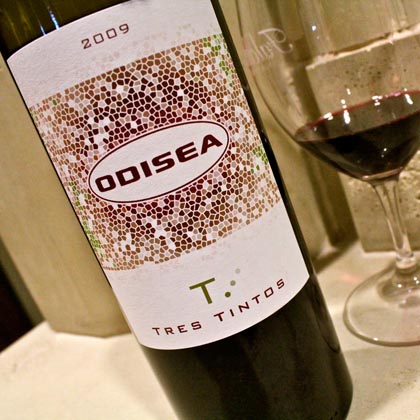