The red Bordeaux grapes of Lodi 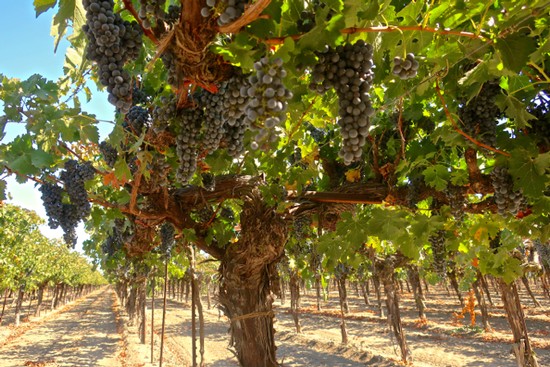 Cabernet Sauvignon has been the most popular varietal red wine in the American wine industry for longer than anyone can remember. Most certainly, it has been #1 ever since the days when sales of varietal wines began to overtake generic wines (such as “Burgundy” and “Chablis”) some time during the late 1980s.

Cabernet Sauvignon, as virtually any connoisseur of red wine would tell you, is one of five black skinned grapes usually associated with the famous chateaux bottled reds of Bordeaux, France as well as all around the world. Including Lodi, as you see in this photo consisting of Lodi grown Bordeaux grape clusters: 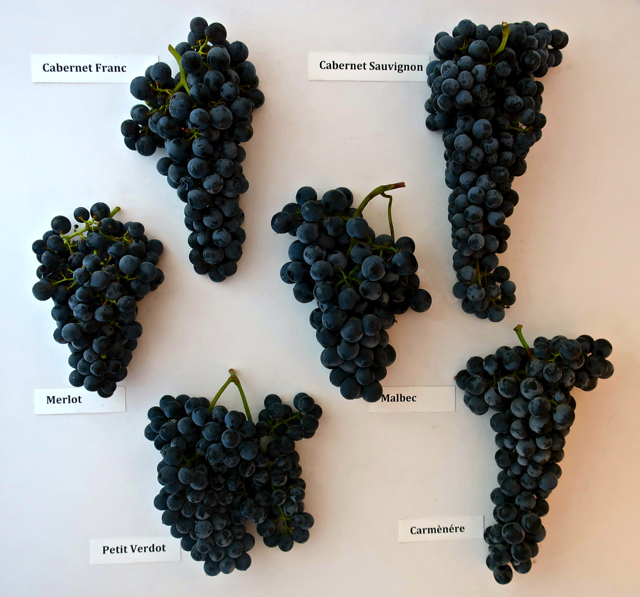 The skinny on each of the grapes (and source of the clusters) depicted above:

Grape source: Keith Watts’ Sargent Rd. vineyard on the west side of Mokelumne River-Lodi – the source of multi-award winning bottlings of this varietal (particularly those bottled by McCay Cellars as well as under Michael David Winery’s Inkblot label).

Cluster morphology: Typical of the variety, a cylindrical, cone-shaped, medium-weight cluster of round, medium-sized berries with an intense bluish-black color. Cabernet Franc is also the oldest known grape variety cultivated in the Bordeaux region – planted there at least since the early 1600s – and is also recognized as one of the parent grapes of Cabernet Sauvignon (which genetic DNA research has shown to be a natural, or wild, crossing of Cabernet Franc and Sauvignon blanc).

As a wine, Cabernet Franc is known for more moderate tannin structuring than Cabernet Sauvignon (the reason it is also an ideal blending grape), with aromas and flavors that can be prettily raspberry/red fruit-ish along with varying degrees of the herbaceousness (the grassy/minty/bellpepper-like qualities derived from methoxypyrazine, or pyrazines) for which Cabernet Sauvignon is also known. Also planted in France’s Loire River Valley region, where as a stand-alone grape it produces the red wines of the Chinon, Bourgueil and Saumur-Champigny appellations. 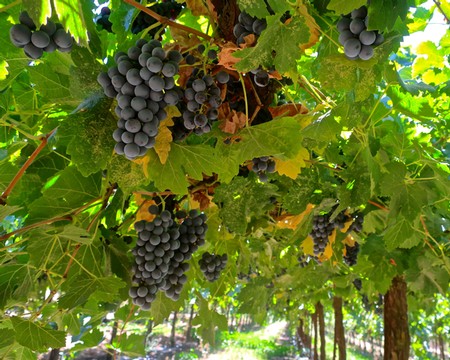 Cluster morphology: Typically a rounded, medium sized cluster with one or two wings, and sparse/loosely stemmed spherical berries of medium size and blue tinted black color. Merlot, in fact, is the second most widely planted red wine grape in the world (after Cabernet Sauvignon); highly favored because it is the earliest of the black skinned Bordeaux grapes to ripen, and is well known for the softer tannin and lush black cherry fruit which traditionally makes it an ideal blending grape.

Hence, Merlot is a particularly good match with the more sturdily tannic, concentrated blackcurrant qualities of Cabernet Sauvignon; although it obviously produces a delicious stand-alone or predominant varietal red in Bordeaux as well as all around the world. Merlot is known to have been cultivated in Bordeaux since the early 1700s; recent DNA studies showing that it originated as a natural crossing of Cabernet Franc and a now-obscure grape called Magdelaine Noire des Charentes. 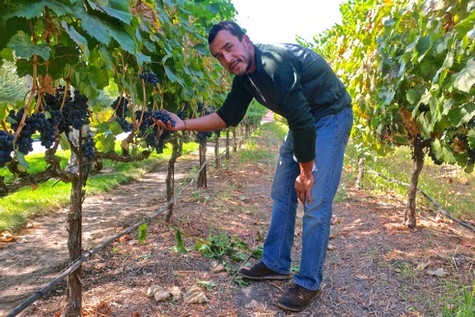 Cluster morphology: Typically exhibits a wide, conical, loose but compact looking cluster morphology, consisting of round, medium-sized, purplish-black colored berries. While one of the major grapes of Bordeaux, Malbec does not appear to have any genetic relationship with Cabernet Franc and Cabernet Sauvignon. It is thought to have originated in France’s nearby Cahors region (where it is the dominant grape, also known there as Côt as well as Auxerrois) before being transplanted to Bordeaux during the 1700s. Argentina, as it were, now grows and produces about 75% of the world’s Malbec (more than 50,000 acres); and it is in these high elevation regions where the grape undoubtedly expresses its floral/black fruit/full tannin/mildly weedy character – qualities the grape also brings to the classic blends of Bordeaux – at its most intense. 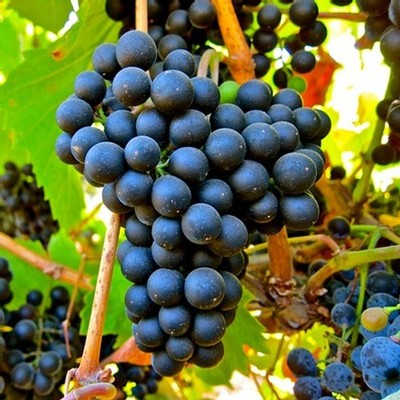 Cluster morphology: First, this grape is pronounced peh-TEE ver-DOH (without an E at the end of Petit, the second T is silent). It is a fairly small, winged cluster of rounded shape; carrying spherical, fairly thick skinned, dark reddish-black berries. Little is known of the origins of Petit Verdot. It does not appear to be genetically related to any of the other Bordeaux grapes, but is thought to have been cultivated in the region by the mid-1600s (therefore pre-dating Cabernet Sauvignon).

Along with Cabernet Sauvignon, Petit Verdot is usually the last of the red Bordeaux grapes to ripen, and is known for wines of dark color and relatively high tannin/acid structure – although its floral notes (violet-like, as opposed to the hibiscus-like scent of Malbec) and dark fruit qualities tend to be narrower than the blackcurrant/cassis concentration typically attained by Cabernet Sauvignon – hence the reason Petit Verdot is usually no more than 2% or 3% of classic Bordeaux blends. 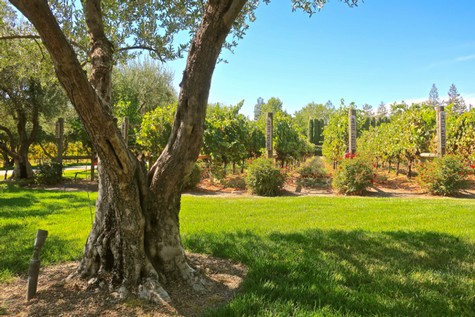 Carménère was, historically, one of the six original red wine grapes cultivated in Bordeaux (where it was known as Carmenet), although it is now rarely seen in the region. Evidently – because of its susceptibility to coulure (also called shatter, when grapes fail to pollinate during cool, wet springs) and oidium (powdery mildew) – the Bordelais opted to forgo the grape during the late 1860s and 1870s, a time when all of Europe was forced to replace vineyards dying of the root louse called phylloxera with vines grafted onto phylloxera-resistant rootstocks.

Yet for well over 100 years, Carménère continued to be cultivated in Northern Italy’s Veneto and Friuli-Venezia Giulia regions (where up until 1990 it was mistakenly identified as Cabernet Franc), and in even greater quantities in Chile (where it was grown and mistakenly bottled as Merlot, probably from the mid-1800s all the way up until 1994 when it was finally correctly identified as Carménère). Chile, in fact, continues to grow massive quantities of the grape: nearly 22,000 acres (in comparison, there are only 68 acres of Carmènére in California). And while known as the Bordeaux grape with the strongest green/bellpeppery/herbaceous (often Tabasco chile-like) qualities, Carmèmére-based reds certainly have their charms; particularly a round, lush, Merlot-like fruit quality, to go with a balanced, fluid, finesseful feel recalling Cabernet Francs. 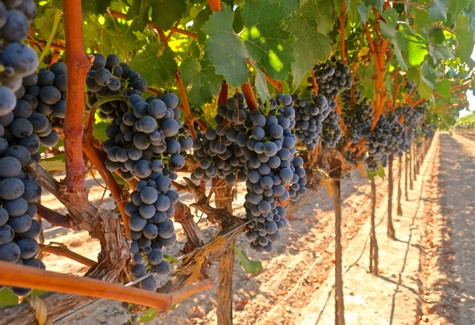 Cluster morphology: One look at a Cabernet Sauvignon bunch, and you can probably see why it is the “king” of the Bordeaux blacks. Growers love its productivity – generous sized, long, pyramid-shaped clusters of small-to-medium, thick skinned, spherical berries of blue-black color – and wine lovers, well, love the deep, rich, full bodied taste of Cabernet Sauvignon, despite (or even because of) its propensity towards slightly weedy/green/minty qualities due to high percentages of methoxpyrazine, which the grape inherited from both sides of its parentage (Cabernet Franc and Sauvignon blanc).

If the exact origins of these grapes interest you, this is a diagram of the genetic tree found in Jancis Robinson’s book, Wine Grapes, which has been called the wine grape “bible” by the famous Australian wine authority Brian Croser: 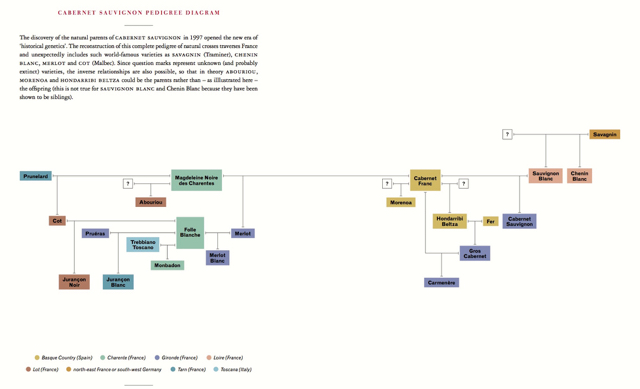 While grown almost anywhere around the world where a grape can be grown (with the exception of the coldest climates, where the grape fails to ripen past its vegetal stage and achieve blackcurrant/black fruit qualities), it definitely responds to variables related to climate, soil, topography and terroir in general. You can even find variables in the consistently warm, climatically Mediterranean sub-regions of Lodi.

For example, a comparison of typical Cabernet Sauvignon clusters grown in Lodi’s Clements Hills and Mokelumne River appellations, along with samples of soils typical of these sub-regions: 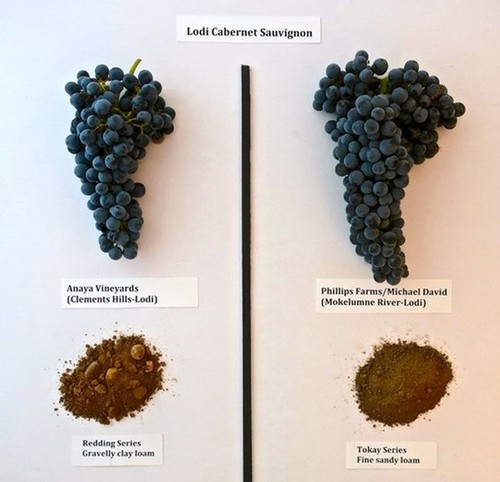 Cabernet Sauvignon grown in the reddish, gravelly clay slopes of Lodi’s Clements Hills AVA tend to be smaller in weight, looser and slightly smaller berried. In the fine sandy loams of the Mokelumne River AVA (well drained soil completely devoid of gravel or rocks), Cabernet Sauvignon clusters are typically more generous in cluster and berry size. The difference in vine growth is as dramatic as the topographies: the Clements Hills composed of far older volcanic soils from the Sierra Nevada eroded over the past 500,000 years; whereas the finely crushed granite composing the silty loams of Mokelumne River have accumulated in the area surrounding the City of Lodi only over the past 25,000 years. 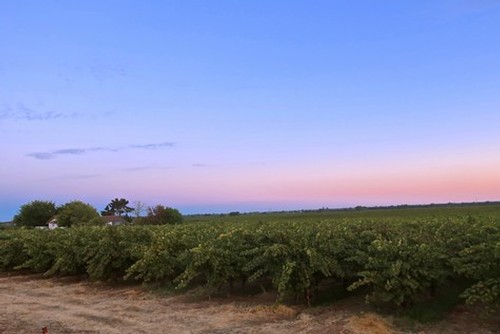 While Lodi is far better known for Zinfandel – and to a certain extent, Mediterranean grapes (such as Albariño and Tempranillo) exceptionably suitable to the region’s warm climate – it is a very large grower of red Bordeaux grapes. This has been part and parcel of region’s role as the nation’s most important supplier of grapes going into the everyday wines you see in retail stores across the country.

In respect to red Bordeaux grapes other than Cabernet Sauvignon, these are the total amounts of acres currently cultivated just in the San Joaquin Valley/Lodi region, according to the 2017 USDA California Grape Acreage Report: 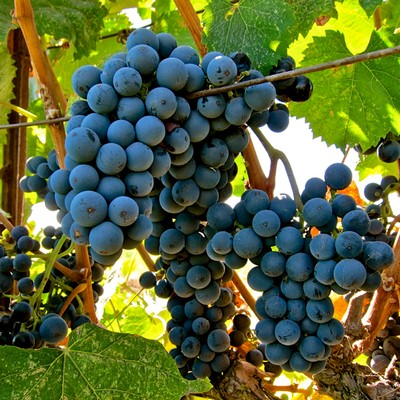 Malbec in Ripken Vineyards (far west side of Lodi) 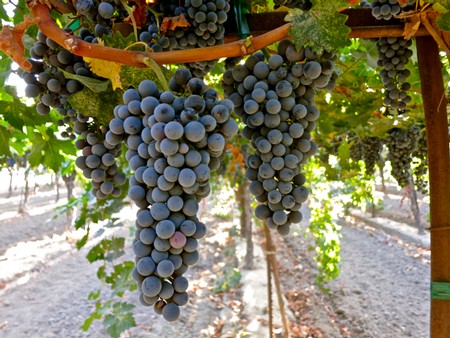 The totals in terms of total tons of California Cabernet Sauvignon crushed in 2017 (re USDA 2017 Grape Crush Report):

And so, according to the latest USDA crush figures, San Joaquin County/Lodi crushes 27.22% of the state’s total Cabernet Sauvignon; a sum that exceeds the amount of Cabernet Sauvignon crushed from San Luis Obispo/Paso Robles (13.29%) and Napa County (11.09%) grown fruit combined.

Put it another way: Lodi produces more Cabernet Sauvignon than any other region in the U.S.  Or, from the perspective of an American Cabernet Sauvignon aficionado who might prefer a wine with a more "everyday" price: Thanks goodness for Lodi! 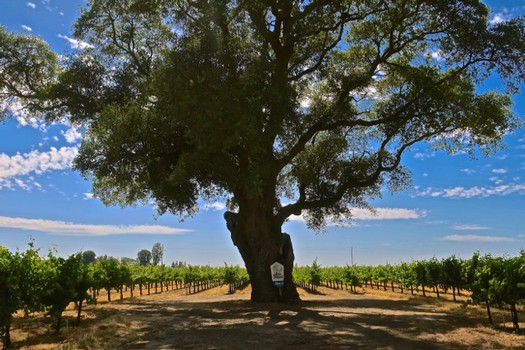