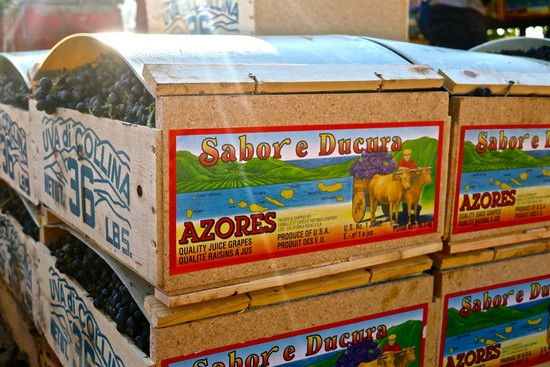 Old vine Carignan, field-packed by Lodi's M & R Company, decked out with a vintage Sabor e Ducura (Portuguese for "Flavor and Sweetness") crate label and headed out to home winemakers across the country and in Canada.

Every mid-September through early October, one of the common sights in vineyards in Lodi is pickers loading grapes into 40-pound lug boxes. Next to the vines, the pickers weigh each lug box on scales in order to be as precise as possible. At the edge of the vineyards, on the side of the road, the lugs are then emptied into colorful wooden boxes by grape packers.

Each crate — filled with grapes such as Cabernet Sauvignon, Merlot, Zinfandel, or Carignan — is sealed with a curved wooden top, and the boxes are bundled together with steel strapping on 36-box pallets, before being loaded onto trucks. 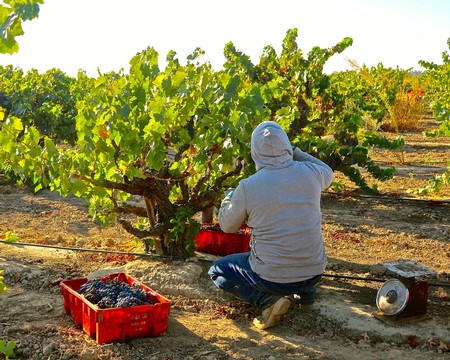 This past week, old vine Lodi Carignan being picked and loaded into 40-pound lug boxes.

These loads of fresh grapes, packed in their colorful boxes right in the middle of the fields, are not destined for wineries. Instead, they are headed to retail markets in the Midwest, the East Coast as well as Canada, where they are sold to home winemakers who look forward each year to enjoying the experience of making wines for themselves.

It is not, as it were, difficult to produce wine. All you really need to do is "crush" the grapes — with your feet, your hands, a paddle, whatever is handy — to allow the sugary juice in each berry to come into contact with the natural yeasts found on the skins. When that happens, grapes ferment all by themselves. The kits typically sold to home winemakers, however, usually contain packets of dried yeasts with instructions on their usage — the thinking being those amateur winemakers are less likely to be disappointed with the results if they rely on laboratory-created yeast rather than on unpredictable native (or "wild") yeast strains. 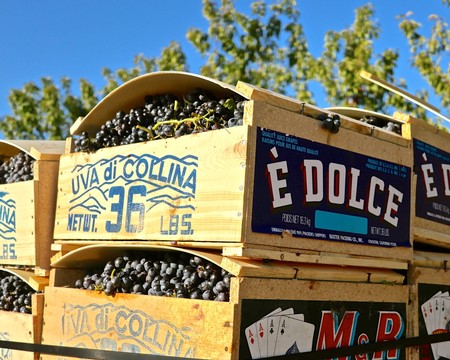 The home winemaking craze reached a peak 95 years ago in the United States during Prohibition, that wild and crazy time when commercial production of alcoholic beverages was deemed illegal. It was not illegal, however, to make your own wine at home: One of the provisions of the Volstead Act was that it allowed every American household to produce up to 200 gallons of wine each year. 200 gallons is a lot of wine — to be precise, more than 1,000 bottles of wine, or over 84 cases. This obviously made a lot of DIY Americans very happy campers.

But home winemakers need grapes to do their magic, which made a lot of Lodi grape growers extremely happy. Rather than a reduction, the sudden demand from home winemakers across the country resulted in a substantial increase in Lodi wine grape acreage during the Prohibition years. Many Lodi families made their fortunes as grape packers — specializing simply in boxing up grapes in fruit packing sheds located along railroad tracks, and sending them as far as New York's Grand Central Station. The Mondavi family, who arrived in Lodi from Minnesota in 1922, did so well as grape packers, they were able to send all four of their kids to Stanford University — including the famous Robert Mondavi, and his brother Peter (who ran Charles Krug Winery until his death at the age of 101 in 2016). 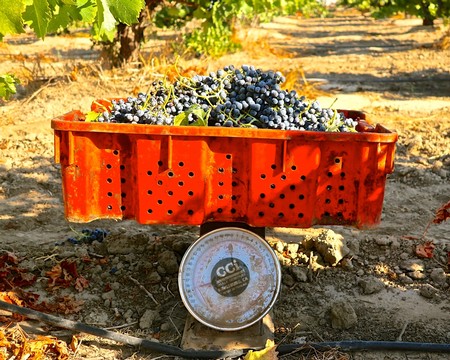 40-pound lug of fresh Lodi Carignan being weighed in the vineyard.

While the oceans of wine from around the world now available in our retail stores no longer make home winemaking necessary, many Americans and Canadians are still in it for the fun. Since Prohibition, Lodi has remained the source of most of the fresh wine grapes eagerly awaited by home winemakers every September and October. According to a winemakermag.com article from a few years ago...

If you’re a home winemaker who uses fresh grapes, odds are they’ve come from Lodi or elsewhere in the Central Valley... To cite just one example among many, a homebrew and winemaking shop called Bacchus and Barleycorn in Shawnee, Kansas (a Kansas City suburb), gets a truckload of fresh grapes from Lodi every harvest. Owner Alberta Rager works with several produce brokers to buy 2.5 tons of grapes and 200 gallons of field-crushed juice. The shipment includes varietals ranging from Cabernet Sauvignon and Zinfandel to French Colombard, Sangiovese, and Carignan. A 36-pound lug of grapes cost between $31 and $49; a six-gallon pail of juice ranged from $50 to $75... Rager will crush and destem the grapes for her customers, and also provides readings on specific gravity, Brix, pH, and total acidity. 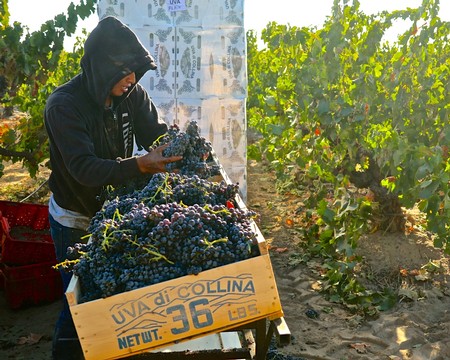 Fresh-picked Lodi Carignan grapes are being rearranged and undergoing a final sorting at the edge of the vineyard.

Two of Lodi's major fresh grape packers are M & R Company and Delta Packing Co. The M & R Company was founded by Don and Rocky Reynolds in 1954, and co-founder/vice president Donna Reynolds (Don's daughter) has a long history of finding "homes," in markets like Canada and the Northeast, for unwanted grapes from historic vineyards such as Bechthold Vineyard (Cinsaut vines planted in 1886) and Giorgi/Ferrari Vineyard (Zinfandel planted in the 1920s). In fact, you can say that without the business of packing companies like the M&R Company, a number of Lodi's heritage vineyards may have been pulled out long ago. 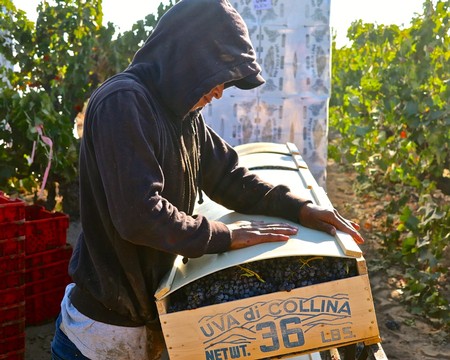 Delta Packing Co. was started by Carl Elkins and Lee Mettler in 1976, and since 2001 it has been run by the Costamagna family, who own and farm over 10,000 acres of multiple crops. Like M & R, Delta harvests and field-packs a variety of fresh grapes in traditional 36-pound lug boxes, which are bundled in the 36-box pallets and sent out in refrigerated trucks to home winemakers across the country.

A pictorial of M & R Company's harvest of old vine Carignan this past week, taking place in the Haynes family vineyard, located on the west side of Lodi's Mokelumne River AVA... 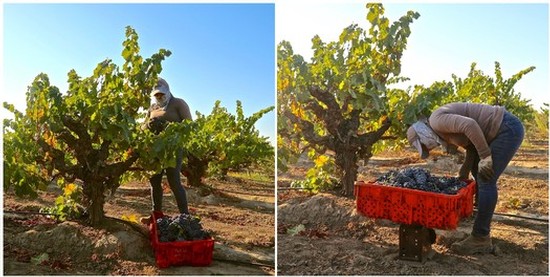 Field packer picking old vine Carignan, and then carefully weighing the load (a total of 40 pounds with fruit and lug). 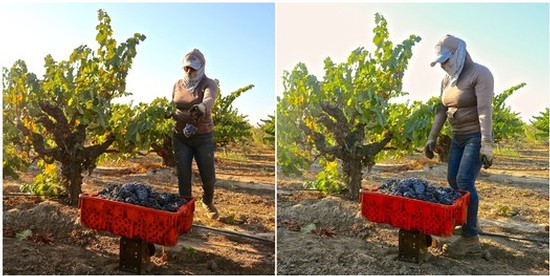 Field packer adding one more cluster of Carignan to get to precise weight. 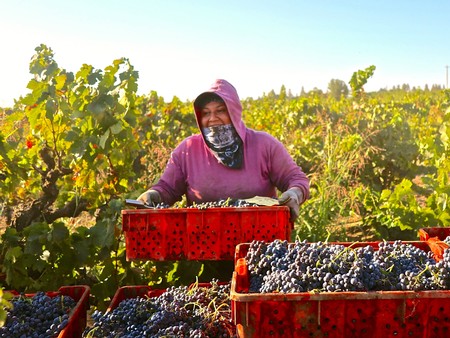 Loading the 40-pound filled lug boxes onto the tractor-trailer. 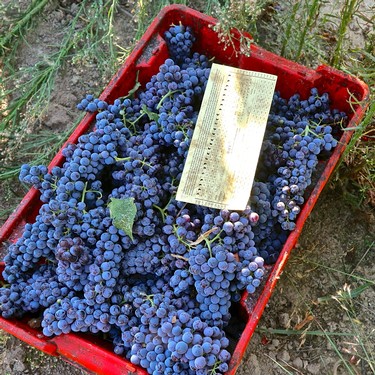 Punch card recording the number of lug boxes filled by each field packer. 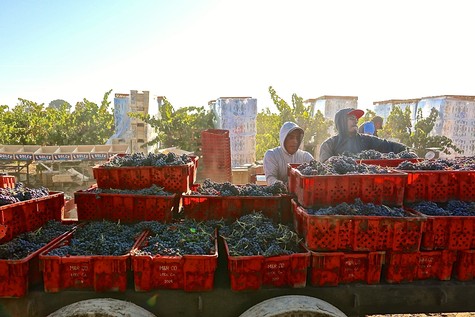 At the edge of the vineyard along the side of the road, field packers unload the 40-pound lug boxes. 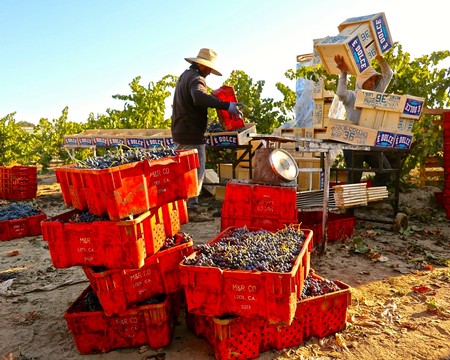 The lug boxes are emptied into the colorful wooden crates. 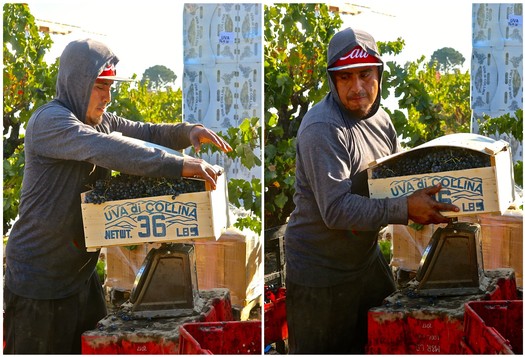 The wood crates are weighed a final time (42 pounds total, including the 36 pounds of fresh grapes) before being sealed with their curved tops. 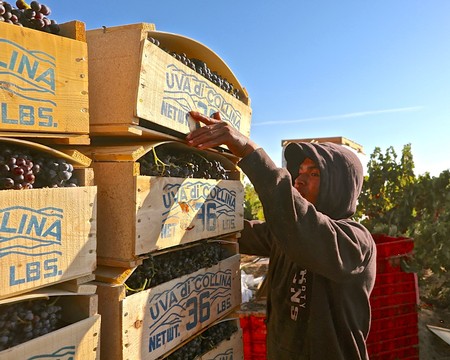 Stacking the filled crates onto a 36-box pallet. 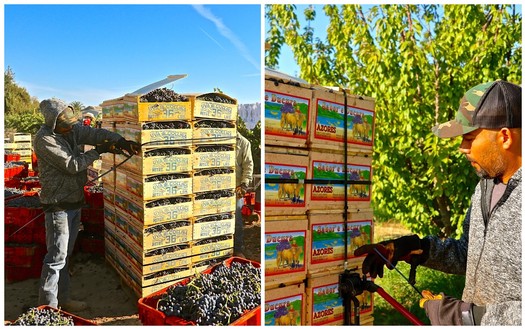 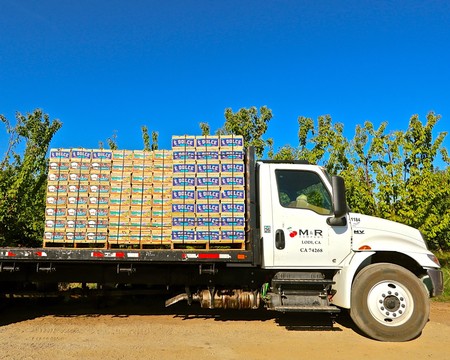 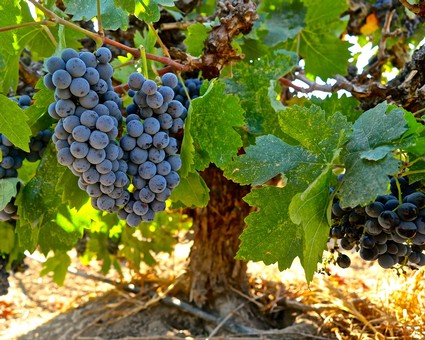 Close-up of Haynes family-grown Carignan on the west side of Lodi's Mokelumne River AVA. 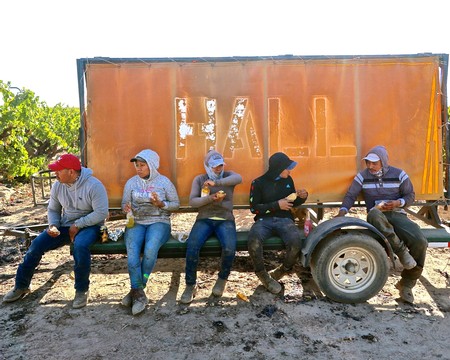 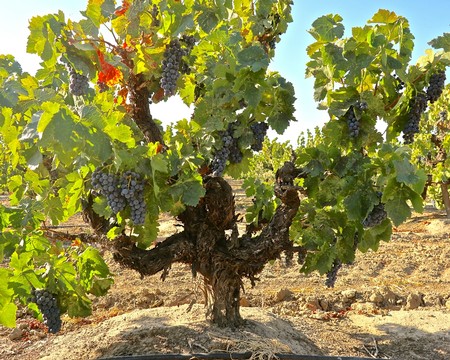 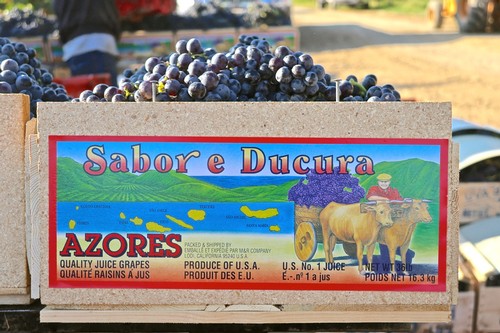