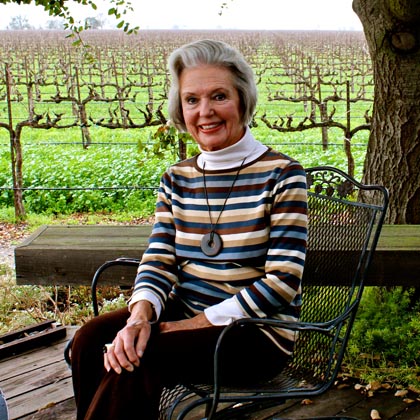 Part 1 – The rediscovery of a diamond in the Delta mists

Tegan Passalacqua, the vineyard manager of the esteemed Turley Wine Cellars, calls it “one of the last of the great dry farmed vineyards in Lodi.” Jillian Phoenix, the former winemaker of Bonny Doon Vineyard and current winemaker/co-owner of Phoenix Ranch in Napa Valley, calls it “a magical vineyard” planted to Cinsault grapes that are “by far the most interesting I have ever worked with in California.” Bonny Doon’s famed owner, Randall Grahm, calls the vineyard “the future of California wine… if people can ever become civilized.” 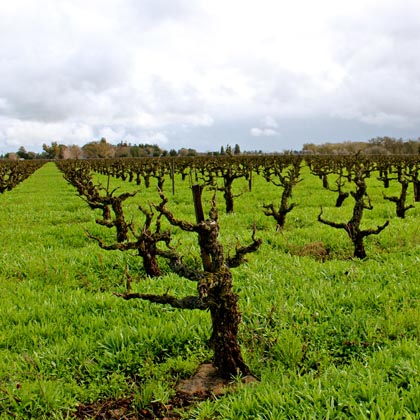 We’re talking about the Bechthold Vineyard, the oldest continuously farmed vineyard in the Lodi AVA, consisting of 25 acres of gnarled head trained vines. Originally planted in 1886 by Joseph Spenker, this venerated vineyard is not only alive and well, it is highly productive and lovingly cared for:  an amazing thing because, up until eight years ago, its star bright fruit was unwanted, unvalued, largely homeless; its hollowed, lichen crusted vines hand tended in obscurity, and on the verge of being ignominiously ripped from the roots, as deep and storied as they are in respect to Lodi’s unique history.

Bechthold Vineyard is actually part of the larger Spenker Vineyard property – with Jessie’s Grove Winery sitting at its center – established by Spenker in the old, west side of Lodi now identified as Mokelumne River. This officially recognized sub-AVA is distinguished by its Delta influenced Mediterranean climate and deep, fertile sandy loam soil that is so well drained that hundreds of acres of its pre-sixties planted vines are still thriving on their natural root systems (whereas well over 99% of the world’s vineyards planted to European grapes are plagued by phylloxera, a root louse that eats away at roots near the surface, necessitating grafting on top of phylloxera resistant native American rootstocks).

Al Bechthold, 82, who farmed the vineyard from the mid-seventies up until to 2008 – when the vineyard was leased to its current caretakers, Phillips Farms (of Michael-David Winery) – says, “I came very close to pulling the entire vineyard several times… the only thing that kept that from happening was my age!”

However, it was Mr. Bechthold’s wife, Wanda Woock Bechthold, 81, who prevented the vineyard’s demise. Kay Bogart, who works with the Department of Viticulture & Enology at U.C. Davis, tells us about the first time she met Ms. Bechthold:  “I believe it was in 2003, when I was doing work for one of Jessie’s Grove’s clients, when Wanda first came over to me, and we started talking about an old vineyard I had noticed previously across the canal. Wanda said they were thinking of ripping it out because the grapes, which they were calling Malvoisier, were being shipped out in 40 lb. lugs for the equivalent of just $200 a ton. She said it just wasn’t worth the price of picking anymore.

“I said to myself, wow, why would you want to do that?  So I took samples of leaves and grapes to U.C. Davis, and right away Andy Walker (U.C. Davis professor and geneticist) identified the grape in this vineyard as Cinsault (a classic black skinned grape of France’s Southern Rhône Valley, Provence and Languedoc-Roussillon).

“I called Randall Grahm at Bonny Doon that very same day and told him about the discovery of Cinsault growing in this magnificent old vineyard, which was being minimally farmed – just sprayed for sulfur, pruned, and weeded, with no irrigation. Randall came out with a friend from France, Nicolas Joly (France’s best known biodynamic proponent). Nicolas was amazed by the inherent vigor and health of the vines, and the quality of the grapes – declaring it the equal to any Cinsault plantings he had ever seen in France.” 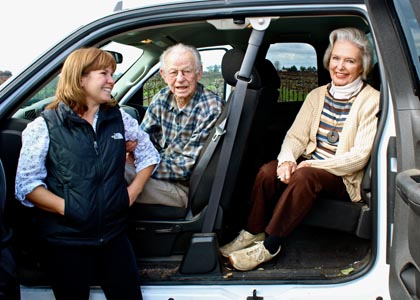 Grahm, as it were, had been on the look-out for Cinsault for many years for possible usage in his iconic Bonny Doon Le Cigare Volant, a Châteauneuf-du-Pape inspired red wine blend that has done more to propel California’s modern day “Rhône Ranger” movement than any other single wine. In 2004, when he began working with the Bechthold Vineyard – which Grahm has always called the Woock Vineyard, in honor of the equally iconic lady – much of the grapes went into his dry pink wine, the Bonny Doon Vin Gris de Cigare. Phoenix, Grahm’s winemaker at the time, says that the Bechthold grown Cinsault “literally went into every red wine blend we made – it made everything taste better, although I’ve always liked it on its own, as a stand-alone red.” 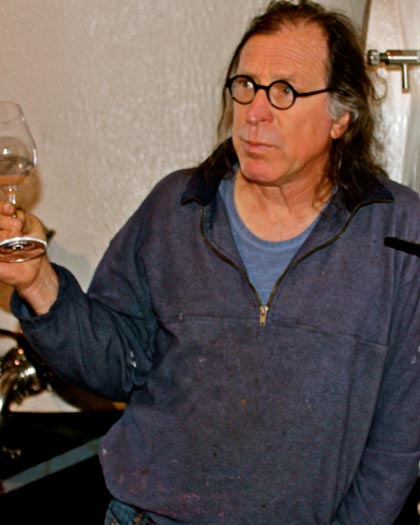 Says Bogart, “Randall Grahm was the first winemaker to give the vineyard its due, but credit really goes to Wanda because it was her ties to the land that kept it from disappearing.  She followed her intuition because she just didn’t feel comfortable about pulling those vines out, and she’s also one of the smartest and most passionate women I have ever met.”

In regards to Bogart’s “discovery” of this near-forgotten treasure in the very heart of Lodi, virtually hidden under everyone’s eyes, questions invariably come up in regards to its usage during most of its 126 years of existence.  Like those who farmed it before him, Mr. Bechthold always referred to the grapes as Black Malvoisie, unaware of its synonymous identity, and import, as Cinsault.

As the great granddaughter of Joseph Spenker, Ms. Bechthold is the heir to this historic property, and has also written a book about it, entitled Jessie’s Grove: One Hundred Years in the San Joaquin Valley, replete with fascinating turn-of-the-century photos taken by her great-uncle, Otto Spenker. In her book, published in 2004, Ms. Bechthold speaks of Joseph Spenker as being interested in “Cinsault, also known as Black Malvoisier,” along with other grapes (like Madeline, Black Hamburg, Sweetwater, Black Ferra and Emperor) popular at the end of the nineteenth century. 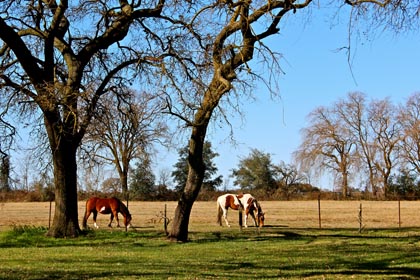 Last week, while sitting in their home personally designed and built by Ms. Bechthold – a low key yet beautifully constructed vinous abode with wrap-around floor-to-ceiling windows framed by deep redwood beams and massive blue-gray stones, looking straight into the oak trees of the actual Jessie’s Grove to the south (a spot of land preserved by Spenker’s daughter, Jessie, who wished to show future generations how San Joaquin Valley once looked, before going under a plow), and trellised Chardonnay and the ancient Cinsault vines to the other side – the Bechtholds shared some of their recollections. 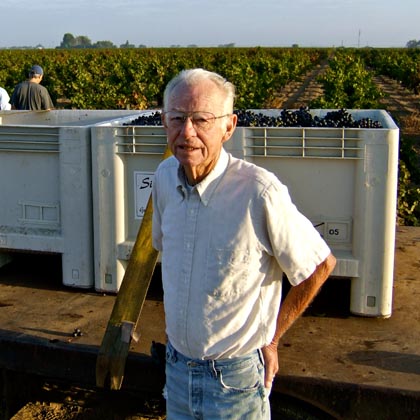 Al Bechthold with his Cinsault harvest

According to Mr. Bechthold, “originally Gallo took all the Malvoisier, for just $45 a ton, the same price they paid for Carignane. But they wouldn’t up the contract, and so we started dealing with M&R Packing Co., who would package the grapes and send them out to home winemakers in Canada. We never got anything close to what the grapes were really worth until Kay Bogart came along and brought Randall Grahm in.”

A master farmer/rancher himself – successful with grapes as well as alfalfa and other crops, while also raising sheep and cattle – for years Al Bechthold lavished attention on the ancient Cinsault vines out of respect for the Spenker legacy. “The vines are planted in about 10 by 10 feet spacing, and were rarely watered, which is why they grew strong enough to suffer through even the toughest vintages. Left alone, the vines could give as much as 4 tons per acre, in a good year. There was always about 15% to 18% die-back in the vineyard, but since Kevin (of Phillips Farms) took over in 2008, he’s done a good job of filling in all the dead spots with replacement plants.”

Ms. Bechthold took us back much further, telling the story of how Spenker, originally from Germany, first crossed the continent in 1856 on a covered wagon trail – “walking most of the way,” she says, which is why it took 154 days – and then traded in his horse for a stake in a gold mine near Murphys in the Foothills. The mine proved to be a bust, and so Spenker began walking to Stockton with $1.27 in his pocket, hitched a ride on a wagon for $1, and took a job on a farm, where he earned $20 a month. 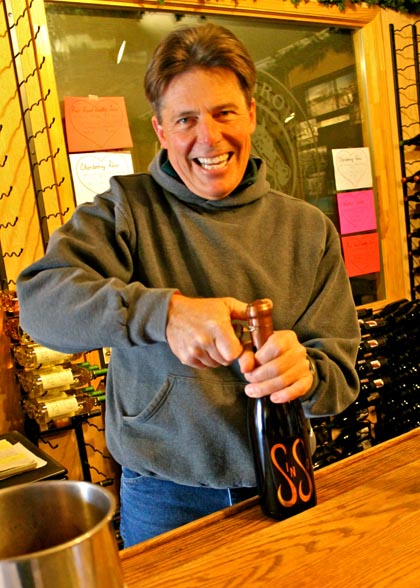 Spenker, however, was as diligent as he was ambitious, and within 10 years he had accrued enough cash through entrepreneural sales of dry goods to miners to purchase the square-mile Lodi farm where Jessie’s Grove Winery and vineyards now stand. On his ranch, Spenker increased his wealth by growing wheat; then planted a palm tree and built a home for his future bride (Anna Spenker, who would arrive later, in more expeditious fashion, two weeks after the First Transcontinental Railroad was completed in 1869). That palm tree can still to be seen, next to Jessie’s Grove Winery, just a few feet away from the second home (still standing) built by Joseph Spenker in the early 1900s.

Says Ms. Bechthold, “in 1885 great grandfather met William West, a successful nurseryman who had also started one of the first commercial wineries (called El Pinal Winery) in California with his brother George West. West talked to Joseph about growing grapes and showed him all the different grape cuttings he had available.

“Joseph had heard good things about Black Malvoisier, and so he planted his first 25 acres to this grape in the heart of the ranch, just north of his oak grove, in 1886. In 1889 he chose another spot on the south side of the oak grove to plant Zinfandel.” Part of Spenker’s second major planting – which is actually a field mix of mostly Zinfandel with Carignan, Mission, Tokay, and Black Prince (a grape later identified by the California Department of Agriculture as Rose of Peru)– can still be seen today, and is bottled by Jessie’s Grove under the Royal Tee single vineyard designation. A stroll through Royal Tee is like another brush against history.

Today, there is a waiting list of top wineries hoping to buy Cinsault from the Bechtholds’ vineyard. According to Kevin Phillips, current clients include Bonny Doon, Turley Wine Cellars, Jillian Johnson (Onesta), as well as Michael-David; with smaller amounts going to Lodi’s Estate Crush (co-owned by Al Bechthold’s daughter, Sandy Sikeotis, who is married to Jessie’s Grove/Estate Crush co-founder Nick Sikeotis), Clos Saron in the Foothills, Miner’s Leap in Clarksburg, as well as specialty boutiques like The Scholium Project and Odisea Wine Company.

Among those sitting patiently on the waiting list? Greg Burns, Wanda Woock Bechthold’s son, who is also winemaker/proprietor of Jessie’s Grove. Burns first made wine from Bechthold Vineyard in 1999, shortly after the winery’s start-up, but the results did not impress Burns or his partner, Sikeotis: at that time they knew the grapes as Black Malvoisier, but the wine was not exactly black in color.

The last vintage bottled by Jessie’s Grove was a 2006 (still being sold at the winery as Sin So), shortly after the vineyard’s newly found acclaim. Says Burns, “it is true that we appreciate the Cinsault more than before, and it’s great to see all these wineries lining up for it. We own the vineyard, and we can no longer get any fruit from it for ourselves!”

Next blogpost:  Part 2 – Why Lodi’s Bechthold Cinsault may be the “future” of wine 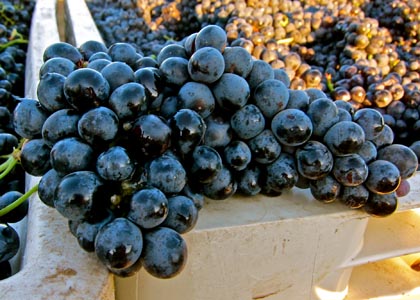