Oak Farm Vineyards and winery during a September sunset

“Keeping things alive forever” is how California photographer John Curley (please visit johncurleyclients.com) describes his ambition whenever he looks through the peephole of his camera.

This past September Mr. Curley was in Lodi wine country to photograph the Lodi Harvest SOMM Camp, co-sponsored by the Lodi Winegrape Commission and the restaurant trade magazine, The SOMM Journal.

The restaurant sommeliers attending this Camp – 28 in all – came from places as nearby as Sacramento, San Francisco, Los Angeles, Orange County and San Diego, and from as faraway as Honolulu, Chicago, Las Vegas, Denver, Minneapolis, Missouri and Wisconsin. For three days they were up at the crack of dawn, tasting wines in fields or with farm-to-table fare deep into the night.

The photos we are sharing in this post capture the surprise and wonder of these wine professionals who, like many consumers, have never thought of Lodi as a source of fine, artisanal style wines... until then. And like many first-time visitors, these sommeliers were amazed by the region’s growers and winemakers; many of them from families who have been farming in the region for three, four, five or even six generations, preserving ancient vines planted as long as over 100 years ago.

Mr. Curley – who has published his photos in New York Times, USA Today, CNN, New York Magazine, the San Francisco Chronicle, San Francisco Magazine, Sierra Magazine, and many others – confesses that, like the sommeliers, "before my visit I had a typical perception of Lodi winemaking, which would be 'huh?'"

As a longtime wine lover himself, Mr. Curley was only too happy to share his impressions of Lodi:

I have to say, my visit to Lodi changed my perception of the region radically. It’s always humbling to learn how much you don’t know, and this was one of those experiences.

As for variety... German style whites in Lodi? Who’d a'thunk?

A lot of the trip has melded into one happy memory, but there are some moments that stand out:

# Tim Holdener (of Macchia Wines) standing by the side of the road in an industrial part of town, and telling us passionately how interesting and complex were the grapes that grew there (Zinfandel from +100-year-old Noma Ranch vines).

# The elegance of Oak Farm Vineyards and the hospitality of all the winemakers who greeted us there and welcomed us to Lodi.

# How amazing it was to learn how many of California’s more storied labels source so much of their grapes from Lodi.

# How refreshing and inspiring it was to see so much pride the people have in their products, which was really brought home when the six Lodi Native winemakers told us about their “friendly” competition, and let us taste their wonderful wines, so reflective of their individual vineyards. I don’t think I’ve ever experienced such a clear-eyed examination of true terroir.

# This may be a little off-topic, but the break-of-dawn grape picking experience we had in Mohr-Fry Ranch opened my eyes in another way. Let’s just say that I thought I’d be just as good a grape picker as anyone working in the fields because, hey, how hard could it be?

Todd Maley, whose family (cousins of the Phillips family) has been farming in Lodi since the 1860s, in his Wegat Vineyard; west side Mokelumne River AVA Zinfandel originally planted in 1958

Tegan Passlacqua, the owner/grower of Kirschenmann Vineyard (ancient Zinfandel, planted in 1915 on Lodi's east side) who is also winemaker of the prestigious Turley Wine Cellars 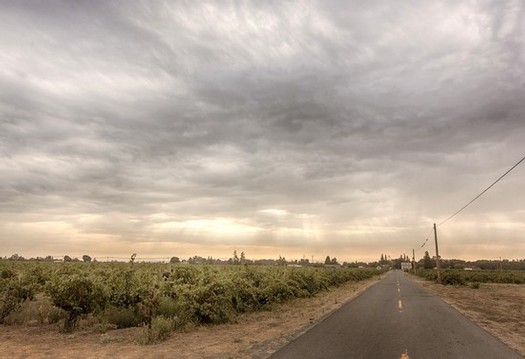 Macchia owner/winemaker in Noma Ranch, talking about the exceptionally high intensity and acidity coming from Zinfandel from these dry farmed, bonsai-sized Zinfandel plantes on Lodi's east side

Bokisch Vineyards' Liz and Markus Bokisch, specializing in Iberian grapes such as Albarino and Tempranillo, greeting sommeliers in their Las Cerezas "home" ranch