Direct influence of east vs. west side terroirs on the taste of Lodi Zinfandels 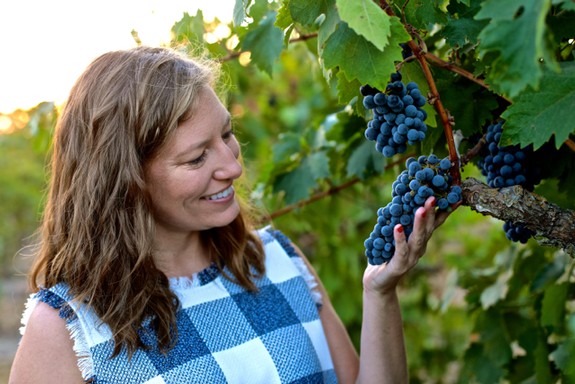 The French call it terroir – a “sense of place” reflecting each vineyard’s unique soil, climate, aspect and overall topography, which is reflected on how vines grow, their resulting grape clusters, and ultimately in the wines coming from those grapes.

Terroir explains why wines from certain vineyards and regions have sensory qualities that are different from wines grown in other vineyards and regions. And yes, there are terroir related distinctions in the wines of Lodi – even those made from grapes as familiar to us as Zinfandel.

More and more, local winemakers have been talking about “east side” Lodi Zinfandels being different from “west side” Lodi Zinfandels. The dividing line is generally thought to be U.S. Route 99 – although more accurately, the unofficial demarcation is the historic Southern Pacific Railroad tracks (now owned by Union Pacific Railroad) running north-south through the City of Lodi – which puts Zinfandels from vines growing in the vicinity of the Victor, Lockeford and Clements communities on the east side, and Zinfandels growing between Wine & Roses Hotel, Woodbridge and Interstate 5 on the west side. 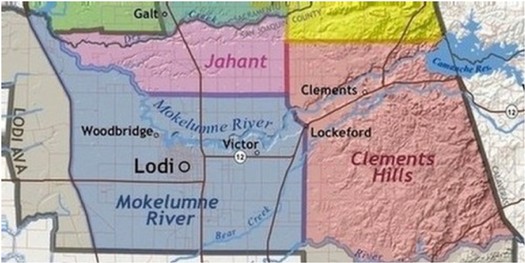 Generally speaking, all the best and oldest Zinfandel vineyards in Lodi are planted on sandy loam soils in the Tokay Series. However, old-time and new-time Lodi vintners alike know that the soils on the east side are significantly sandier than soils on the west.

In terms of vigor: Zinfandel grown along W. Turner Rd. or near Jessie’s Grove Winery on the west side, for instance, sit on sandy soils with a rich mixture of dark, organic loam; whereas Zinfandel grown along Alpine Rd. or Bruella Rd. near Victor are rooted in soil that is less vigorous and sandier to the point of being practically like soft, white beach sand. On hot days, you almost want to lay down a beach blanket and play Frankie Avalon and Annette Funicello songs.

So how does that affect grapes? Here is a photo of Zinfandel clusters from four Lodi vineyards taken this past September 2018, right before the grapes were harvested: 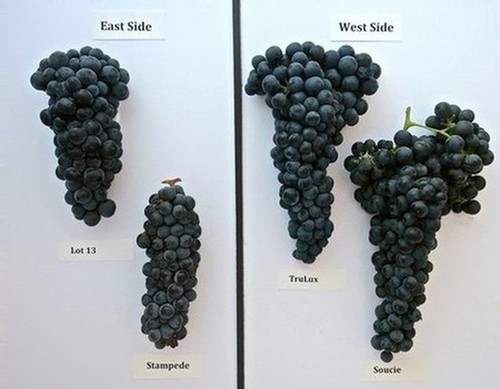 While berry sizes in all but the Stampede Vineyard sample are fairly proportionate, the biggest difference is in the size and weights of the clusters as a whole:

• Berry size is smallest in the Stampede Vineyard because it is located in a riverside site near Clements where the soils are even more depleted than in vineyards near Victor (such as the Lot 13 Vineyard), with an ultra-fine, powdery sandy loam – hence, the tiniest bunch.

• The west side vineyards of TruLux (located just south of Van Ruiten Family Winery) and Soucie (located barely an eighth of a mile from I-5) have richer and loamier sandy soils, thus resulting in larger clusters with bigger berries.

How does this affect the wines? Because of the elevated skin-to-juice ratio found in the smaller clusters grown in Stampede, Zinfandels from this vineyard tend to have a zestier quality of acidity along with a firmer, dryer tannin feel – yet are very pretty in black or red cherry fruit qualities.

Zinfandels from Lot 13 Vineyard are typical of east side wines, which generally tend to have

By way of contrast, Zinfandels from west side vineyards such as TruLux and Soucie tend to be 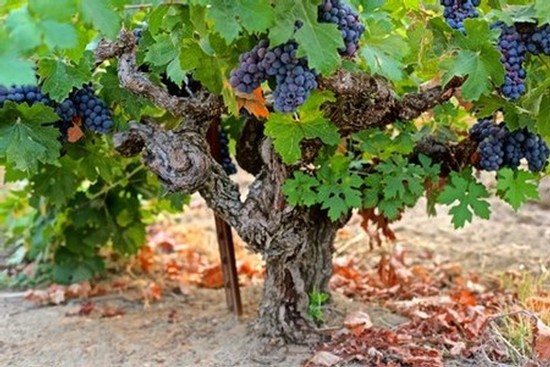 Needless to say, sometimes manifestations of “east vs. west” side styles overlap in individual wines. Mettler Family Vineyards, for instance, produces an east side grown Lodi Zinfandel that is as generously fruited and full bodied as any grown on the west side; not in the least because there is also a good percentage of Petite Sirah (a grape with more intrinsic tannin than Zinfandel) blended into the wine, plus a generous “toasted” oak aging regime contributing further to a sense of fullness. Winemaking decisions matter.

Alquimista Cellars (based in Sebastopol, Sonoma County) fashions a west side grown Lodi Zinfandel from Jessie’s Grove’s 1889 vines that is perfumed with red fruit qualities, has distinct acid delineations and is very restrained in body and tannin – thus, tasting very “east side.” But that is largely because the wine is co-fermented with a good proportion of Carigan, Mission, and even Tokay and Black Prince grapes (all growing in this historic Zinfandel block) which lightens the weight of the wine considerably, and also because the wine goes through a whole berry/partial whole cluster fermentation imparting more floral, fragrant fruit qualities resulting from carbonic maceration (i.e. intracellular fermentation taking place within the whole berries prior to primary fermentation).

That said, excellent examples of these different Zinfandels that can be found locally or nearby: 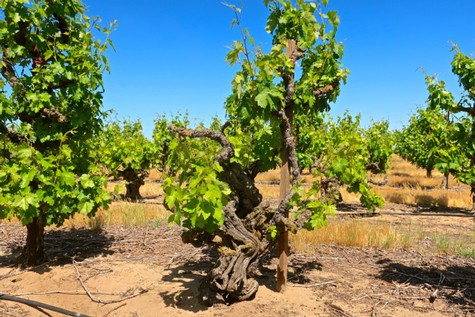 This past April 2019 on Mokelumne River-Lodi's east side, ancient Zinfandel (planted in 1904) in Lizzy James Vineyard alongside interplanting of younger vines (planted in the 1970s) 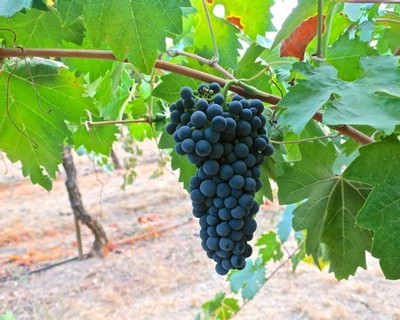 And stellar examples of Lodi grown Zinfandel produced outside the region that can be sourced online or through other means: 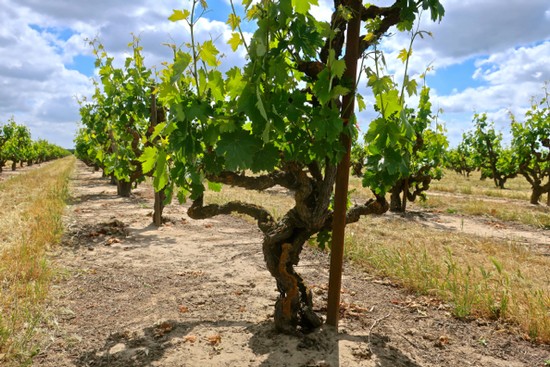 This past April 2019, creaky kneed ancient vine Zinfandel (planted in 1901) in Marian's Vineyard on Mokelumne-Lodi's west/south side