A definition of wine aromas 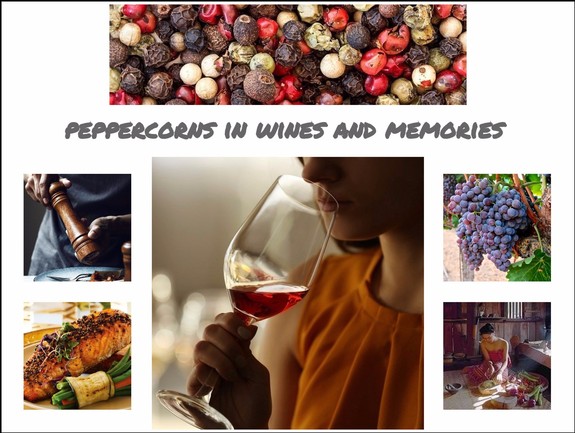 Vivid images typically triggered by the scent of peppercorns, even in wine: pepper grinders in a restaurant, peppercorn salmon from the grill, wines made from the Grenache grape, or a culinary experience in an exotic place such as Southeast Asia.

The term "aroma" is pretty much self-evident: It is the smell of wine derived from grapes.

In an older, snobbier or geekier interpretation, aroma used to be distinguished from "bouquet"—the latter term, meant to distinguish smells in wine that result from bottle maturation. The vast majority of consumers buy a bottle of wine in the afternoon and drink it that night. They could give a hoot about "bouquet."

Therefore, in actual practice, aroma is used to describe any smell originating from grapes used to produce wines. These are smells resulting from the fermentation process, which also evolve after a little bit of time in a bottle. 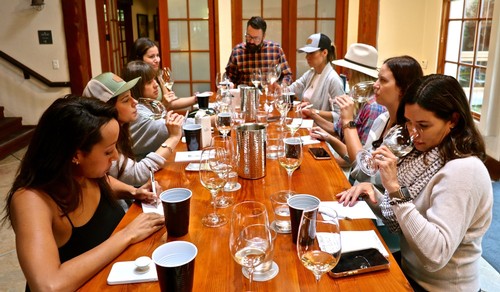 Visiting wine influencers focused on the aromas of wines in a blind tasting held at the Lodi Wine & Visitor Center.

Today, with the growth of wine magazines and access to endless amounts of wine information in general, the more pressing distinction has become the difference between aromas you can smell and aromas you can actually identify, since sensory profiles do not become distinguishable unless you can put a word to them. That is to say: You may smell something in a wine, but if you don't have the vocabulary to describe it, it might as well be nonexistent. Most wine consumers are like this. On the other hand, wine consumers who can readily identify different aromas may obviously derive a little more pleasure from a wine; which is why it is always a good idea to become a more aroma-conscious wine consumer. Wine is a social beverage anyhow—enjoy it with friends, talk about what you're tasting, and undoubtedly your appreciation of wines will increase a little more. Which, of course, also means you get more bang for your buck.

The way it actually works is that aromas are perceived by physical receptors in the nose, which in turn relay signals with attendant information to the brain via nerve endings. Therefore, an average person may very well learn how to perceive the scents of lemon, black pepper or rose petal—all smells found commonly in wines, albeit in subtle fashion. But until your brain learns to identify these scents, the perception of them remain an unconscious response, even if pleasurable. 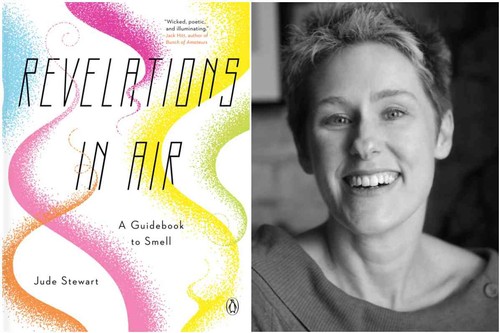 Aroma is also flavor-related. In her recent book, Revelations In Air (A Guidebook to Smell), Jude Stewart gives a short summary of how perceptions of flavor are driven by our sense of smell:

Flavor is the overarching term to describe how smell and taste merge with other sensory cues like mouthfeel, temperature, and even pain receptors for spicy foods... Your tongue can perceive five tastes—salty, sweet, sour, bitter, and umami, [the latter] a Japanese term describing a fatty or savory flavor—but that's it. Hold your nose and then sip some coffee, and you'll only get a bitter taste. But release your nose to the the smells while tasting, and then you'll identify this bitter taste specifically as coffee—or perhaps something even more specifically as latte macchiato or espresso. We depend on our sense of smell to render broad taste classifications higher-res and pinpoint exactly what we're enjoying.

Complicating the relationship between the sense of smell and neural activity of the brain is the fact that not all human beings smell things the exact same way. One reason is physical—you may not be predisposed to smell certain things. The other reason, more common, is experiential—if you've never experienced a certain smell before, then you can't be expected to identify and fully appreciate it, whether you're sipping a macchiato or a fine wine. You may thoroughly enjoy your first sip of a macchiato or great wine, but you may have trouble verbalizing exactly why that is, or why you're enjoying it. Identification is especially important to wine appreciation because there are so many different wines to choose from. 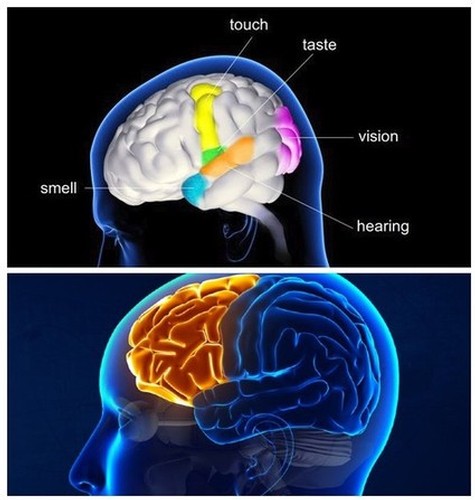 At the top, the temporal lobes of the central nervous system utilized to distinguish tastes; and at the bottom, the cerebellum and prefrontal cortex used to process the memories necessary for identifying sensations of smell, touch, taste, vision and hearing.

The noses of most wine lovers, for instance, are not sensitive to the smell of black pepper in a wine, whereas there will always be a minority of wine lovers who can greatly appreciate the scent of pepper—qualities typically found in varietal red wines such as Syrah, Petite Sirah, Zinfandel or Grenache. The skins of these grapes possess a molecular compound called rotundone, which is a primary component  found in peppercorns. A black pepper aroma, in fact, is what makes Lodi-grown Grenache so different from Grenache grown in other regions around the world.

No one really knows why Grenache is so fragrant in peppery scents in Lodi—most likely, it is the result of our region's specific type of Mediterranean climate—but it is important because it is a terroir-related marker. The only way this can be injected into wines made from grapes not known for peppery qualities is by blending with another wine that happens to be peppery, like giving a twist of a peppercorn grinder over a salad or steak. As it were, peppery aromas are what naturally give Lodi wines made from Grenache their own special "sense of place." 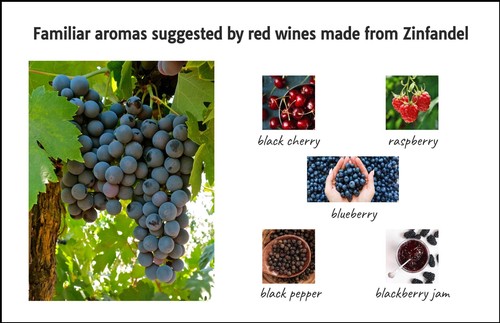 Aromas typically suggested by red wines made from Zinfandel, which include a black peppery spice.

The other big factor, as Stewart points out, is the fact that smells are directly connected to, and intertwined with, the sweet, sour, bitter, salty and umami sensations perceived on the palate. There is a good word that has been used to describe the close relationship between perceptions detected in the nose and perceptions tasted on the palate: It is called syncretism. The human experience of all tastes is something you can define as syncretic—that is to say, the fact that smells and tastes perceived on the tongue accumulate and merge in our memory banks, to the point where, mentally, they're distinguishable only as full, multifaceted experiences.

Therefore, when you smell the juice of a fresh lemon, your brain perceives it as palate sensations that are both refreshing and predictably sour or puckery, even though "sour" and "puckery" sensations are perceived on the tongue rather than in the nose. It doesn't matter: Since the brain is perceives "sour" and "puckery" qualities through the nose, even before these sensations are tasted on the tongue, you are for all intents and purposes smelling the sour sensations of lemon. 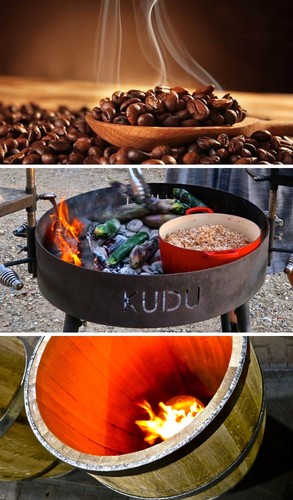 The scent of "smokiness" often found in wines can suggest roasting coffee, open fire roasted food or the char of wine barrels, which are shaped (while being "toasted") over open fires.

Not only that, but also a host of other perceptions stored in our memory bank. The scent of lemon, for instance, may trigger vivid memories of sweet/sour lemonade you remember drinking one hot, sweaty summer day, or other related images or emotions originating from a time when your parents helped you set up a lemonade stand, back when you were 10 years old.

Accordingly, because it automatically triggers memories, the nose can even perceive sensations that are "hot" (such as in chili pepper), "cold" (the soothing feel of menthol), "dry" (or like wood, remembered as pencil shavings) or "sweet" (different scents, such as vanilla, spearmint, cinnamon, etc.). This is what we mean by sensory syncreticism: It is very much aroma related, and defined by your individual memory. 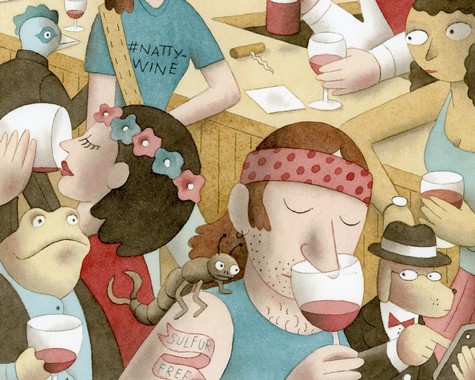 In terms of wines, the focus on aromas is our most effective way of delineating differences we find in wine glasses. The identification of aromas is why we taste wines in curved glasses in the first place—the better to collect vapors emanating from wines, that can be smelled (see our post, Why wine glass shapes matter)—and it is this activity that leads to an increased appreciation of the wines we consume.

Please see our next post: Wine aromas, part 2—On olfaction, the discipline of identifying wine aromas