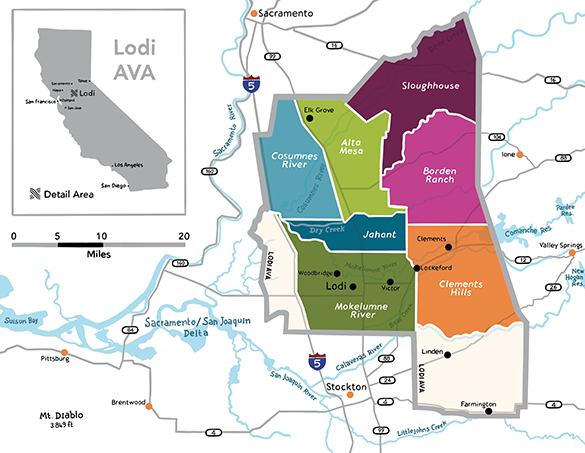 The Lodi American Viticultural Area (AVA) was officially recognized in February of 1986. Perfectly situated 90 miles east of the San Francisco Bay, the Lodi AVA is one of the largest in California at approximately 550,000 acres, more than 100,000 of which are planted to premium winegrapes. The Federal Register document acknowledging the approval of the Lodi AVA describes the region as “an inland area that is comprised mainly of alluvial fan, flood plain lands, and lower and higher terrace lands” with a narrower range in temperature than areas directly to the north and south due to “its location opposite the wind gap leading inland from the Golden Gate.” In 2006, Lodi was sub-divided into seven smaller appellations based on subtle to drastic differences in soil types, climate, and topography which do affect the characteristics of grapes and, ultimately, wines being produced from these areas. Lodi’s seven nested appellations include: Alta Mesa, Borden Ranch, Clements Hills, Cosumnes River, Jahant, Mokelumne River, and Sloughhouse.

The largest of Lodi’s sub-AVAs with approximately 42,000 acres out of the 85,700 acres planted to a diverse variety of winegrapes. The AVA is named for the Mokelumne (or Mighty Moke) – a 95-mile-long river flowing from the central Sierra Nevada through Lodi and the Sacramento-San Joaquin Delta before emptying into the San Joaquin River-Stockton Deep Water Shipping Chanel. One of the most distinguishing characteristics is the soil. Deep sandy loam Tokay and Acampo soils dominate the area, allowing for ideal drainage, vine health, and naturally moderated grape yields.

The smallest of Lodi’s sub-AVAs with approximately 9,000 out of 28,000 acres planted to winegrapes. The name is derived from Peter Jahant who settled in the vicinity of the small, neighboring town of Acampo in the 1850s. Two of the most distinguishing characteristics are its pinkish Rocklin-Jahant loam soils. The soils are so unique that the boundaries of the Jahant AVA are defined by their extent. These soils tend to be sandier at the top and are preceded by layers of dense, cemented clay and gravel. While these thick layers make it more difficult for a grapevine to establish exceptionally deep roots, they also retain water well which means less need for irrigation.

The largest of Lodi’s sub-AVAs in terms of total acreage, 54,700, but only contains 3,500 planted acres making it the smallest number out of all seven sub-AVAs. The AVA is named for the Cosumnes – a river that flows out from the Sierra Nevada and down through the north eastern portion of the Lodi AVA before joining the Mokelumne River at Cosumnes AVA’s southwest corner. Younger, moderately fertile, silty soils dominate 60% of the AVA in lower areas of floodplains, sloughs, and wetlands. The remaining 40% is covered with mid-age, reddish, gravelly clay loam soils in the San Joaquin Series.

The sub-AVA spans a total of 55,400 acres of land which includes approximately 5,300 acres of planted winegrapes. The name means “high table” in Spanish – a fitting description of the AVA’s tabletop or mesa-like topography which ranges from 35 feet on the western edge to 135 feet in the east. One of the most distinguishing characteristics are its soils. Nearly 90 percent of this sub-AVA is covered by soils in the San Joaquin series. The San Joaquin soil series has a high percentage of clay and gravel, and intensive reddening and cementation caused by silica, clay, and iron. This dense, heavy clay prohibits deep rooting by grapevines. Because of this, deep ripping is required prior to planting.

The Clements Hills AVA is home to 21,700 acres of planted winegrapes, second only to Mokelumne River AVA, 85,400, in terms of planted acreage. The name Clements Hills is a nod to the sub-AVA’s hilly terrain as well as to the community of Clements, founded in 1857 by Thomas Clements. The soils range from older soils (225,000 years plus) to much younger (up to 25,000 years), fine sandy loams which are deep enough to accommodate own-rooted, old vine Zinfandel dating as far back as the 1920s. The older soils in this sub-AVA are in the Redding (primarily), Cometa, Yellowlark, and Montepellier series and range from brown and reddish orange to yellow loams, clay loams, and clays with granitic and volcanic sediment.

The sub-AVA covers a total of 70,000 acres of which 12,000 acres are planted to winegrapes. Bisected by Dry Creek just south of center, this AVA is the only one of Lodi’s seven sub-AVAs with land in both Sacramento and San Joaquin counties. The AVA name is a reference to the actual Borden Ranch – a well-known breeding ranch for thoroughbred racing horses and Hereford cattle established by Ivey Lewis Borden in 1864. Hillside soils include very old (125,000 to 700,000 years) volcanic mud flow and alluvial stream deposits from Laguna and Dry Creeks which are dominated by metamorphic coble, stony clay pan, and clay loam.

While Sloughhouse AVA spans an impressive 78,800 total acres, it is home to a mere 8,000 acres of planted winegrapes. Located entirely within Sacramento County, this sub-AVA is approximately 21 miles southeast of the city of Sacramento and 22 miles north of the city of Lodi. The name Sloughhouse is taken from the unincorporated community in the area and from Sloughhouse Inn which was founded by Jared Sheldon in the 1850s. Soils in Sloughhouse consist of older (avg. 500,000 years), lower vigor, reddish-orange silt, sand, and gravelly loam in the Redding series as well as Corning, Pentz, and Hadlesville series. Sandier loam soils and increased hilltop river rock slopes exist in the vicinity of Deer Creek and Cosumnes River on the AVA's north edge.