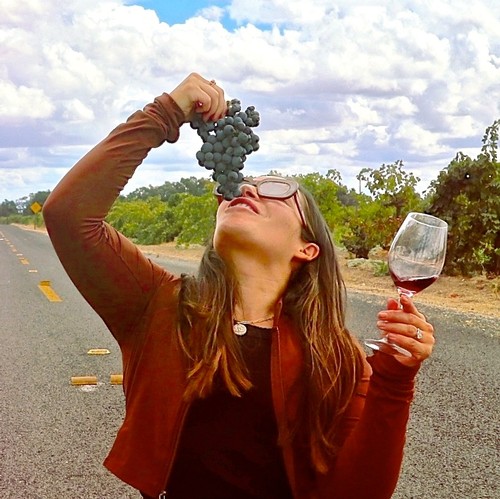 Continued from A definition of wine aromas

When I was a 21-year-old restaurant sommelier (45 years ago) I honed my craft like many others—through constant blind or double-blind tastings. Something I rarely do these days except in occasional professional wine judgings.

Youth will be served, but sometimes it takes an “older guy” to show you the ropes. I have good memories of one named Dave, with whom I especially enjoyed challenges as a 20-something. I would say to Dave, “This Zinfandel has a real fresh berryishness.” He’d look at me with a pained expression and ask, “What do you mean? There are all kinds of berries—there are blackberries, raspberries, strawberries, blueberries, currants, elderberries, gooseberries, and on and on, and none of them really smell the same.” Of course, I’d be stumped, because as a 21-year-old who grew up in Hawai`i, I had zero experience with half the berries he was talking about. 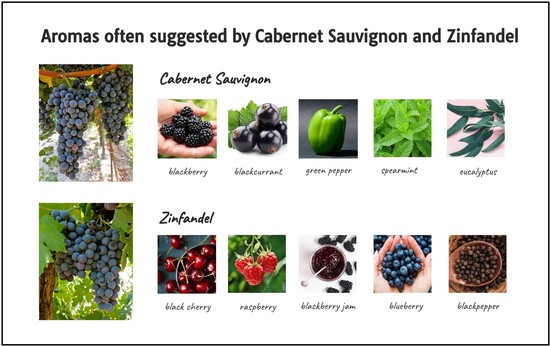 Then I’d say something like, “This Napa Valley Cabernet Sauvignon is very minty—you can’t dispute that, Dave.” He’d say, “You still don’t know what you’re talking about. There’s a big difference between the smell of spearmint and peppermint, not to mention chocolate mint, or the artificial ‘Doublemint’ you find in Wrigley’s chewing gum. Or are you talking about eucalyptus? That’s a common mistake so-called wine experts often make because there are also all kinds of eucalyptus, most of them smelling more like cat pee than any kind of herby mint.”

Dave retired long before I, too, became an older guy, but truth be told, I’m still grasping at aromatic straws. The difficulty of identifying aromas in wines hit home more recently on two separate occasions, when I sat through exhausting multi-day exercises with other wine professionals, in workshops put on by Alexandre Schmitt. Mr.Schmitt, originally from Bordeaux in France, has recently been visiting the U.S. at least once a year to put on what he calls Olfaction Seminars: classroom sessions aimed at introducing wine professionals, especially winemakers, to a more disciplined way of mastering their olfactory—identifying smells, particularly from the perspective of a professional perfumer, which is Schmitt’s original profession. 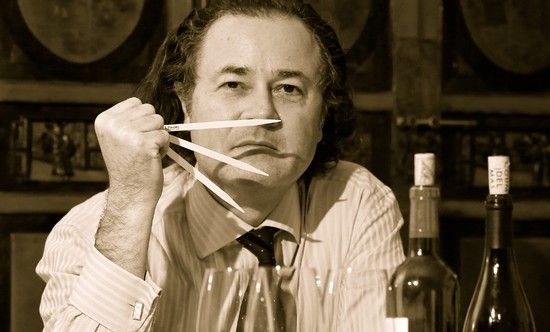 Alexandre Schmitt with strips soaked in various scents, which he uses to train winemakers how to distinguish nuances in wines.

A graduate of the International Superior Institute of Perfumery in Versailles, and later an instructor at the Bordeaux Pharmacy University, Schmitt was drawn into the wine industry 20 years ago by Jean-Claude Berrouet of Château Pétrus. In his lectures on "olfaction," first started at Bordeaux Oenology University, two of Schmitt's watchwords have been “precision” and “freedom.” That is to say: Learning the rules of objective wine description—avoiding both incorrect identifications and dubious flights of fancy—and through that process, coaching ourselves to develop our own, reliable “classification of aromas,” thus liberating ourselves from our mental limitations.

In the classroom, Schmitt is by necessity a harsh instructor; but like a bemused cicerone leading you through the dark, he marks the way by presenting small strips of paper soaked in a scent, which he then asks you to describe and, if possible, identify. In one round, he presented two strips, both citruses: One smelling strong, acidic, almost bitter and animal-like, which turned out to be the scent of lemon; and the other smelling sweeter and less acidic, with a slight soapy greenness, which we learned was lime. 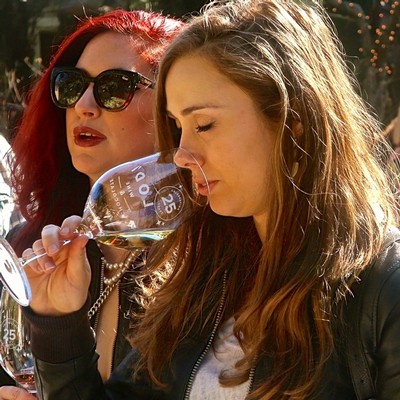 Right away, a professional trained in traditional wine-tasting methodology—particularly those influenced by U.C. Davis systems first devised by Professors Amerine and Roessler over 50 years ago—might say that you cannot “smell” senses of acidity and bitterness because these sensations must be physically tasted on the tongue. Schmitt says that this is a fallacy because, in reality, “we cannot separate the sense of smell from the sense of taste.”

The accumulation of all sensations in our memory bank—that is, our syncretic perception—is how we develop our olfactory system from the moment we become conscious beings. For instance, not being able to smell a lime without also thinking of one sweaty, delirious night in a gritty Mexican border town, hearing música norteña, feeling the pain of a tattoo needle, and associating sour, salty tastes with the sweet, solvent smell of tequila. Our most powerful sense is not so much what we smell as what we remember. 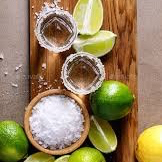 What is more important to Schmitt is that wine professionals develop the ability to differentiate sensations from perception: Sensations being the odors we smell, and perception the mental interpretation of those odors. Sensations can be exact, but it is in the interpretation that most tasters lack precision. In other words, most of us have trouble identifying smells because our memories are faulty. 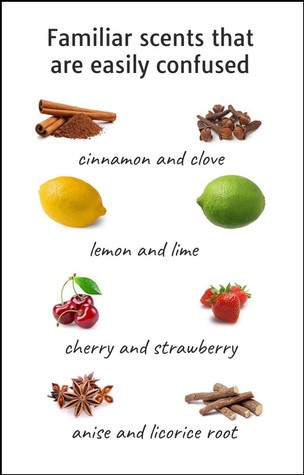 Without visual aids, mentally distinguishing these variations of citrus proved extremely difficult— barely two or three out of the dozen of us sitting in the classroom could put a finger on them. At the first Olfaction seminar I attended, only one in the group could identify the scent of bergamot: A wine writer who happens to regularly drink Earl Grey tea, which is spiced with bergamot, and who also added that he has always associated the smell of bergamot with the Touriga Nacional grape—one great example of using syncretic experience to sharpen wine tasting ability!

Further demonstrating the syncretic nature of perception, Schmitt presents students with the smell of fennel, which is a natural, floral, anise-like smell; contrasting this with the smell of black licorice, a confectionary’s scent manufactured by combining anise with caramel and a woodsy molecule. 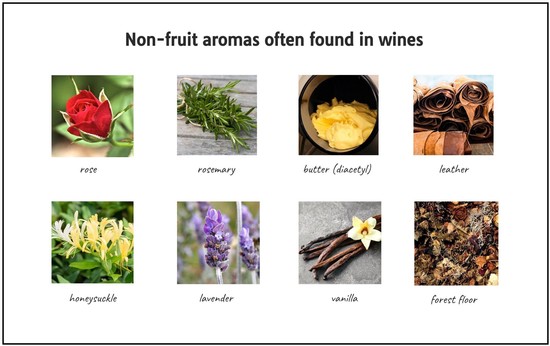 Then Schmitt talked about other smells in the “anise family,” including tarragon, dill, licorice, basil, and caraway—each one similar yet distinctly different. Among other scents proffered by Schmitt to challenge our senses:

• Maltol (a burnt caramel-like vanillin molecule, common in oak barrels)
• Furanéol (coconut butter-like vanillin, also common in oak-aged wines but not to be confused with maltol)
• Cinnamon as opposed to clove (two distinct smells that are often conflated, even when one is not there because these spices are often used together)
• Jasmine, which we compared to gardenia and orange blossom, two other flowery but distinctively different fragrances
• Walnut
• Almond
• Fig
• Coffee
• Maple
• Honey
• Fenugreek

... and more—each one conjuring up some kind of syncretic memory ("I remember!"), even as we struggled to find the actual words to identify the messages being relayed from our noses to our brains through neural impulses.

“It is not surprising,” says Schmitt, “that wine tasters can experience very similar feelings but express different judgments.” But by educating ourselves through olfaction, we can develop a “confidence that is essential in the understanding of wine’s aromatic complexity.”  Putting it more simply: If you learn to experience your sensory world with more of a perfumer's precision, your ability to distinguish and describe the wines of the world is sure to expand, and so will your enjoyment. 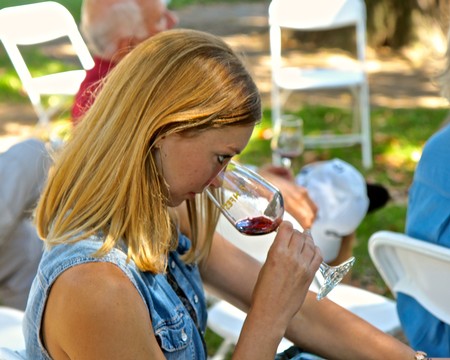 Wine lover at a Lodi ZinFest of the past.