1969 – A year of change and unforgettable times

1969. If you weren’t born yet, we envy your youth, but feel sorry you missed it.

There were good times in 1969. There was a little thing called Woodstock, which everyone and their friends’ friends claimed to have “almost” attended. Neil Armstrong set foot on the moon. Sports fans had their “Miracle Mets” and “Broadway Joe” Namath. Star Trek was just cancelled, which only got Trekkies warmed up. 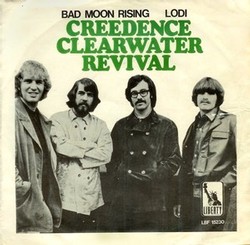 Otherwise we were hearing “sock-it-to-me” on Rowan and Martin’s Laugh-In; and “Proud Mary,” “Everybody’s Talkin’,” “Get Together,” “Get Back,” “A Boy Named Sue,” “I Heard It Through the Grapevine,” and so many other all-time classics over the air waves.

1969 was also the year that the song “Lodi” – composed by John Fogerty and performed by Creedence Clearwater Revival – came out on the B-side of “Bad Moon Rising,” and later on their Green River album. For a song with such a sweet, memorable opening chord progression, “Lodi” sure has a downer of a chorus: Oh lord, I’m stuck in Lodi again.

Still, it’s a heckuva lot easier to sing than “New York, New York,” and mercifully sap-free, unlike “San Francisco with Flowers In Your Hair.” Sure, it’s a about a musician feeling sorry for himself; but most fans would take “Lodi” any day, over almost any other song about a town or city.

“Lodi,” as we’ve reported here before, was never a true tale. Mr. Fogerty was never a down-and-out musician playing in a club in Lodi – his career shot out of a cannon into big-time venues barely weeks after he got out of the Army in 1967. According to the man himself, communicating with fans on creedence-online.net, "The first time I ever heard the word 'Lodi,' I thought it was the coolest sounding name, so I saved it for the longest time...

“I sat down and wrote about being on the road," adds Fogerty, "being a musician – not the happy, glamorous part. Rather, I projected myself ahead maybe 10 years, as a country musician singing that minor hit I had 10 years ago. There I was… I wasn't in Los Angeles, not even in Cucamonga. I'm way out in Lodi! The song went from 'Lodi' to 'Oh Lord, stuck in Lodi, again,' not a happy thought."

As fate would have it, “Oh lord, I’m stuck in Cucamonga again” didn’t work. So it’s Lodi that ends up with the kick-butt song.

1969, as posted earlier this month (see Lodi’s Johnny-come-lately history), was also the year when the wine industry reported sales of dry table wines exceeding sweet, fortified dessert wines for the first time since pre-Prohibition days. The Lodi wine region’s 15 or so wineries, unfortunately, were more equipped for the production of dessert wines, bulk wines or brandies.

As a city, Lodi celebrated 100 years of existence in 1969. At the time, its population was 28,691. As of 2014, the U.S. Census Bureau puts it at 63,950. Enough for, say, a Safeway, a Walmart and three Starbucks; but evidently not for a Whole Foods or Trader Joe’s. Which is fine by most Lodi natives, who much prefer that growth be restrained enough to maintain a green expanse of surrounding agriculture – pushed back against urban encroachment from Stockton to the south and bedroom communities of Sacramento to the north, and unregulated growth of strip malls and subdivisions from within.

Although it would take Lodi another 25 years to really get into the premium quality varietal wine groove, it wasn’t like the region was doing nothing. According to a 1970 U.C. Davis report on the “California Grape Situation and Outlook” delivered by Extension Viticulturist A.N Kasimatis, “North San Joaquin Valley (which would become defined as the Lodi Viticultural Area in 1986) accounted for 25% of the1969 California wine grape crush,” whereas “California’s famous coastal winemaking counties account for a mere 8% of the total 1969 crush...”

At that time, most of California’s wine grapes were being crushed in neither Lodi nor in coastal regions; but rather in Central and Southern San Joaquin Valley (some 64% of the state’s total, grown from Modesto to Bakersfield), going into the bulk wines and dessert wines that most Americans were consuming.

Kasimatis shares some interesting figures reflecting the transitional stage taking place in Lodi in 1969: reporting a total of 21,720 acres of table grapes (i.e. Flame Tokay) planted in Northern San Joaquin Valley, compared to 34,950 acres of wine grapes. Cognizant of the growing consumption of wine in the U.S. at the time, Kasimatis also makes note of the “diminishing role of the seeded table grape” in the market; reporting that “some 90% of the tonnage was crushed” (primarily for bulk wine production), with “only 10% going for fresh sales.”

1969, in other words, was also a year signifying a beginning of the end of the era of Tokay as a dominant fresh market commodity – a factor underlined by the fact that there was also 2,390 acres of newly planted, non-bearing wine grapes going into the ground in Lodi (much of it displacing ancient Tokay vines) that year.

To give you another idea of how the California wine industry looked at the time, here is the list (cited by Kasimatis from a San Francisco Weekly Wine Report) of the most widely planted red wine grapes in 1969 which, again, reflects the reality of what consumers were really drinking at the time (grapes like Carignan, Zinfandel and Grenache going primarily into bulk or dessert wines):

Carignan-my-wayward-son: ancient Carignan vines like this once dominated vineyards in Lodi and all of California

These were different times in so many ways, but one thing will never change: those songs will always be hecka-great!

Patrick
@ Nov 3, 2015 at 2:20 PM
http://grabados.org
Great post. I was not old enough to drink in 1969, but I certainly remember Guild wines, which were advertised on the radio, and the Creedence song, Creedence being something of a local band for those of us who remembered them as the Golliwogs when they played at the Memorial Auditorium in Sacramento. I think the list of most-planted red grapes just about describes the contents of Gallo Hearty Burgundy, no?