1906, when Lodi became a City and quit its lowdown ways 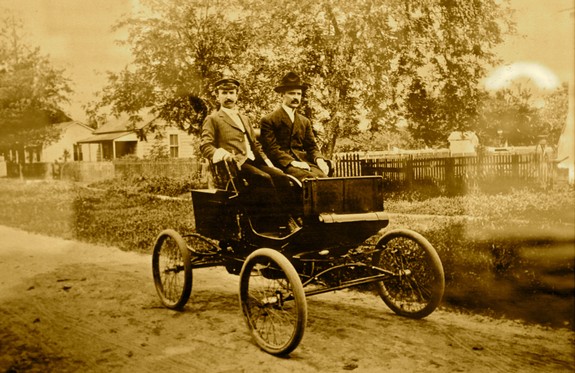 In the early 1900s Lodi was going places (even if the speed limit for horseless carriages driven by these two Lodi natives was just 8 MPH!)

110 years ago – on November 27, 1906, to be precise – an election was held in Lodi (population 2,000 at that time) to incorporate as a City. Finally, as local historian Toni Christman puts it in Our Time to Shine (2012), “citizens were well on their way to respectability.”

As with most rural American towns, "respectability" for Lodi did not happen overnight. Just two years earlier, in 1904, a motion to incorporate had been decisively voted down, primarily due to the opposition of saloon owners and other businesses. The tide turned, according to Lucy Reller and Ralph Lea in the Lodi Historian (Lodi Historical Society) newsletter, because “the opposition of the saloon keepers had a reverse effect and increased the desire of church people and the average citizen to incorporate.”

Up until then, writes Christman, “the town of Lodi grew like an unruly child, gathering strangers from all walks of life migrating from (nearby) Lockeford, Stockton, Sacramento in addition to other existing nearby settlements. Lodi was sometimes referred to as a ‘rum-guzzling’ town with young boys on the road to hell.”

So let’s paint a picture of this once-forsaken town, starting in 1846 when the first settlers of European descent arrived in the area we know as Lodi. The earliest arrivals settled on the name “Mokelumne,” for the Mokelumne River winding through the area on the way to the Delta from Sierra Nevada. Mokul is a corruption of the native Plains Miwok tribe’s word for river; umne referring to “people of.” By 1846 the Miwok population had all but disappeared; particularly following a calamitous plague ravaging San Joaquin Valley in 1832. 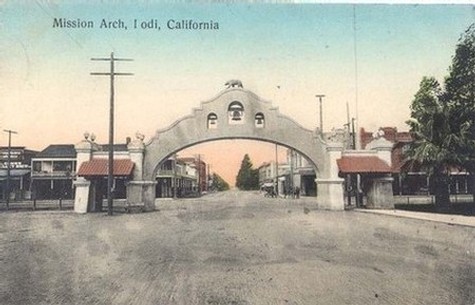 In 1869 a group of the area’s original landowning settlers persuaded Central Pacific Railroad to make Mokelumne one of the stops between Stockton and Sacramento. The town's first business buildings, at the corner of present-day Sacramento and Pine Streets – where the landmark Lodi Arch would later be erected in 1907 – were built alongside the railway station; a site chosen because it sits on slightly higher ground, less prone to the Mokelumne River's frequent (at the time) flooding.

But aside from the obvious difficulty of pronouncing Mokelumne, locals knew another name eventually needed to be chosen because the town was often confused with nearby communities with similar names – particularly Mokelumne Hill and Mokelumne City – which continuously hampered mail delivery and delayed shipments of goods and supplies.

But why the name “Lodi?” According to Christman, one opinion “holds that it honored a famous trotting horse bred in Woodland, California, raced in Sacramento. Another theory says settlers from Lodi, Illinois promoted the choice. A third possibility recalls the Italian site of Napoleon’s first victory against the Austrians. Lodi in Italian means beautiful. Whatever reason you choose, in 1874 it became Lodi.”

However, in the 1870s and 1880s, the newly christened Lodi was still a classic Western American town. Writes Christman: “In 1881, Lodi was considered wild, uncontrolled and causing great distress to peaceful residents. Partiers patronized too many saloons spending too much money gambling on cards, or horse, dog and turkey races. Then for lack of anything else, they threw their hard-earned dollars away on turtle races! 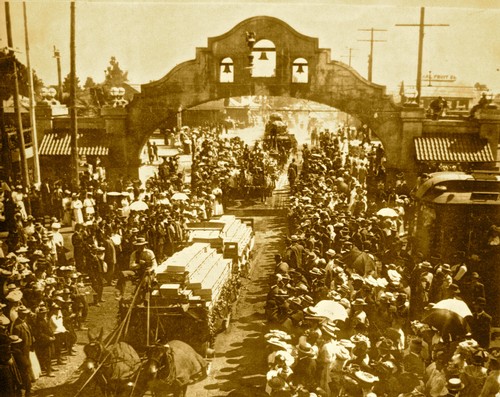 “Inhabitants carried sports to extremes as a diversion from everyday life. On Sundays, and Holidays, especially July 4th, the business world would close its doors and shopping came to a standstill. Sacramento Street would come alive with bystanders, bettors, and spectators lined up taking pleasure in observing the horses and dog races. Well-attended baseball games against nearby towns provided additional Sunday wagering opportunities in both money and prizes. These wagering events were sometimes followed by a dance at the Sacramento Street Park.

“Dog racing was not always performed on a track using Greyhounds. In the early 1900s, participants picked a large field then proceeded to turn their dogs loose on wild rabbits. The first dog to catch a rabbit won the race...

“Authorities attempted to curb illegal gambling practices in Lodi. The Club Saloon in 1902 had the nickel-in-the-slot machine, only to meet its fatal fate. The three slot machines (one-armed bandits) in Lodi Hotel in 1903 were given a fond goodbye with their faces turned facing the wall. In the refined Chinatown community, income needed to pay debts was instead being lost on lottery tickets.”

Then there were animals – not wild ones, just an overwhelming domestic population. Writes Reller and Lea, it wasn’t until 1895 that the County Board finally appointed a “Poundmaster” to “pick up dogs, pigs, horses and cattle, etc. from the streets of Lodi during the day, but at night most people opened their gates to allow animals to eat grass and Lodi looked like a country fair.” 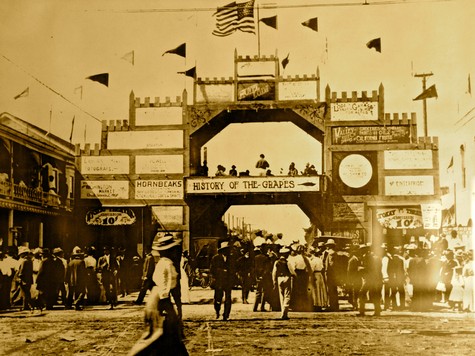 Although Lodi’s population was never to grow at the rate of more urban communities like Sacramento to the north and Stockton to the south, it quickly became renowned as an agricultural community. In 1876, according to Christman, the “the world’s largest crop, 3.4 million bushels of the grain (wheat), was raised around the outskirts of Lodi.” When wheat and barley prices failed, local farmers turned to watermelons, and by the early 1890s Lodi had a new title as the “Watermelon Capital of the Country.”

It would be grapes, of course, that would eventually emerge as the region’s most enduring crop. Christman tells us, “Swiss immigrant Mr. Magley was said to have planted the first vineyard in 1848 on Turner Road. The projected wealth from this new crop beckoned relatives and acquaintances in the Dakotas, who hastened to this land of plenty.” By 1905, Lodi was known worldwide as the “heartland of the delectable Flame Tokay grape,” and by 1907 Lodi was shipping out over $10 million (over $240 million by today's currency) in grapes for the table or for wine production.

Most of Lodi’s new arrivals between the 1890s and 1920s were of German descent. Aside from mud-holed streets and the promising agricultural opportunities, what they found in their new home was less than acceptable from a social standpoint.

Writes Christman, “Race tracks plus about 14 saloons far outnumbered its four Churches. Abstemious Germans were appalled by a main street lined with bars sporting brass railings, spittoons, scantily dressed fast ladies of the night, loud piano music and mugs of beer for five cents. Worse, those establishments were open all evening; including, heaven forbid, Sunday! Because there were too few churches for the population, religious services were often held in saloons.”

During the first decade of the 1900s, the arrival of a more “respectable” Lodi populace led to the establishment of no less than a dozen new churches of various denominations; and “this rough ‘n ready settlement,” according to Christman, was steadily transforming into “a God-fearing town." There were catches, however, to this newfound piety. Adds Christman, "By WWII, when Lodi’s population was approximately 8,000, nearly half were of German descent. The joke among these folks was: knock on any Lodi door and a relative will answer. In later years, the joke became: if you want to date someone, find out first if you are related!” 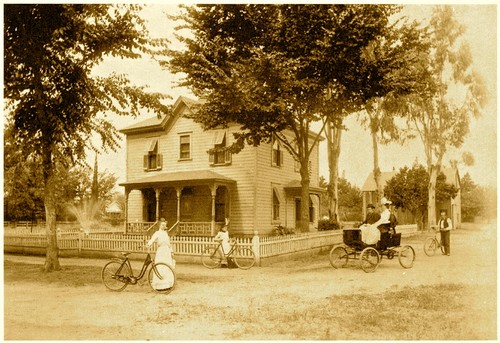 Hence, in December 1906, when Lodi’s newly appointed Board of Trustees began to meet to establish order, new laws and revenue sources, the following were among the first ordinances passed:

• Saloon licenses are $100 for three months, plus $12 for billiard tables.
• A quarterly fee of $50 for patent medicine sales using music to attract attendance (i.e. medicine shows).
• Other license fees; including $10 for real estate offices, $15 for hotels, $3 for “storekeepers” or “traders.”
• No “trading” on Sundays.
• Saloons open only from 6 AM to 12 PM, and closed on Sundays.
• Saloon windows must be high enough to prevent youngsters from peering in.
• Minors possessing liquor must have a note from a parent.
• No gambling within City limits.
• Disposal of “filth, rubbish, offal and slops,” plus a law prohibiting “swill carts” from leaking.
• No “animals at large on City streets.”
• Misdemeanor charges for “vulgar and abusive language in public,” “whistling in public halls,” and “singing in saloons.”
• A speed limit (for suddenly fashionable horseless carriages) of 8 miles per hour.
• Unlawful to leave horses unhitched.

Even more importantly, Lodi’s incorporation as a City would almost immediately lead to the establishment or improvements of essential services such as utilities (especially for gas, electricity and water), sewage disposal, fire hydrants, and street paving.

Finally, in a burst civic pride, Lodi rank and file mobilized to announce its presence to the rest of the world by organizing the Tokay Carnival – a 3-day celebration of the region’s supreme grape and the region’s economic “arrival,” symbolized by the Mission style Lodi Arch that still stands today, at Pine Street and Sacramento Street (see our previous blogpost, In 1907 Lodi celebrated grapes like no American city never-ever has). 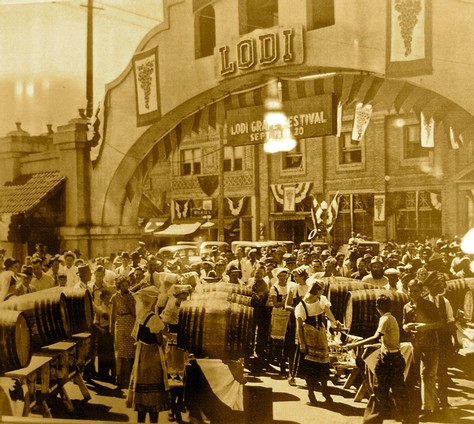 Where is the City of Lodi (population now just over 63,000) at today? We asked Lodi's current Mayor, Mark Chandler, who told us:

The City is now governed by an elected City Council made up of 5 members. We elect a Mayor and Vice Mayor among ourselves, and direct staff (principally the City Manager) to carry out our decisions. The City Manager has an executive team comprised of the City Attorney, City Clerk, Planning Director, Public Works Director, Electric Utility Director, Police and Fire Chiefs, Parks and Rec Director, etc. The City employs about 380 employees; plus there are volunteer advisory boards and commissions who provide recommendations to the Council regarding their issues.

One of our most pressing issues today is economic development - increasing jobs and employment by bringing new companies to Lodi and growing the ones already here. We want to expand hospitality infrastructure to leverage the success of the wine and tourism industries. Public safety (especially reducing crime, gang and/or drug related) is a major concern, and as well as Public Parks (rehabilitating Lodi Lake and other parks where deferred maintenance is diminishing the visitor experience). And of course, finance - such as dealing with the looming public employee retirement service obligations - is a major priority.

If you ask most locals, Lodi has come a long ways, but the future looks just as bright and wide-open as it did 110 years ago. As the Lodi Sentinel proclaimed, reporting on plans for the September 19-21, 1907 Tokay Carnival:

Which, to some extent, is exactly what has come to past... what with recent recognitions such as Wine Enthusiast's "Wine Region of the Year," Lodi has been "showing" itself to the world with aplomb-plus! 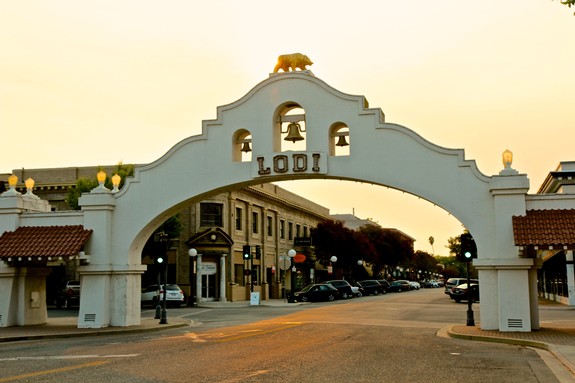