TAPAS & Albariño, for all the right (culinary) reasons 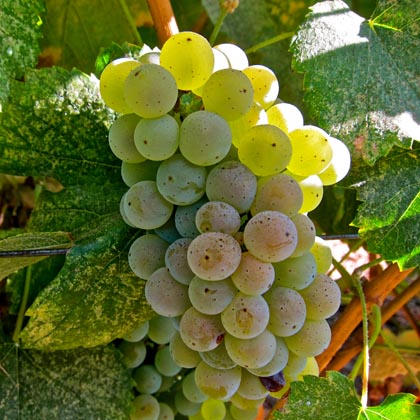 Do you enjoy alternative style wines veering off from the usual heavy handed, ripe or oaky style typical of “California” wine?  Then  you should seriously consider attending the Grand Wine Tasting sponsored by TAPAS – that is, the Tempranillo Advocates Producers & Amigos Society – this coming Saturday, June 19, 2012 in San Francisco’s Fort Mason Center; and where, needless to say, a number of Lodi’s top producers will be pouring.

TAPAS, which is all about appreciation of wines made from grapes native to Spain and/or Portugal, is turning out to be a very good thing for jaded wine lovers.  Especially if you prefer a wine that impresses you by how well it goes with food, rather than by its 100 point score.  There are still few wines in the world that can shock you by the way they drastically alter sensations in the context of food as much as those made from grapes like Tempranillo, Garnacha, the Touriga Nacional and Franca, etc.

Among white wine grapes falling under this Iberian umbrella, Verdelho and Torrontés are just beginning to turn New World winegrowing into a brave new one, and maybe someday soon we’ll even see American grown wines made from grapes like Verdejo, Mencía, and even Vinho Verde grapes like Loureiro, Trajadura and Arinto.

As it stands today, the grape that we believe has made the most dramatic statement thus far, in terms of both quality and sheer culinary usefulness, is Albariño:  twenty years ago, a relative obscurity to American consumers; but today, a grape that is fast approaching the familiarity of a Pinot Grigio, for all the right (culinary) reasons. 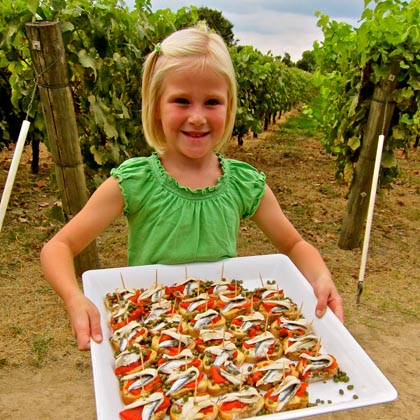 There is a world of foods, especially from the ocean, that taste best with lightly tart, refreshing dry white wines like Albariño.  Think of Hawaiian fish (like white, meaty mahi-mahi or tender, mildly briny opakapaka) or Hawaiian style tuna poke laced with chopped sea vegetables and sweet onions — nothing wrong with that! — or a classic seviche or salade Niçoise.  If that makes you hungry, imagine a lightly tart, sleek, palate slaking, dry white wine like Albariño to wash it all down.

But what is the difference between a varietal white like Albariño compared to, say, a Pinot Grigio (also known as Pinot Gris)?  For one, Albariño tends to have a more expansive, readily appealing stone fruitiness (i.e. peach, apricot, nectarine-like).  The natural grape acidity of a good Albariño is on the par with a Sauvignon Blanc, but you will never find weedy, bell peppery, or even sweet pea-like, notes of pyrazine typical of Sauvignon Blanc in an Albariño (not that pyrazines in themselves are a major negative – but it is a differentiation).

Natural acidity is always a plus for Albariño, but it is rarely so sharp that it bites.  A good Grüner Veltliner, for instance, can be just as perfumed and minerally as an Albariño, but also typically more austere in its acidity.  Both Riesling and Albariño are flowery and citrus scented; and in fact, in some quarters Albariño is still said to be a clone of Riesling supposedly transplanted by twelfth century German monks (a good story, but a mythical one).  Be as it may, even the zestiest Albariño is rarely as tart, or fusel oil-like, as a dry style Riesling; and in fact, an Albariño is typically more viscous, sometimes even creamy in texture, in a way Riesling never is. 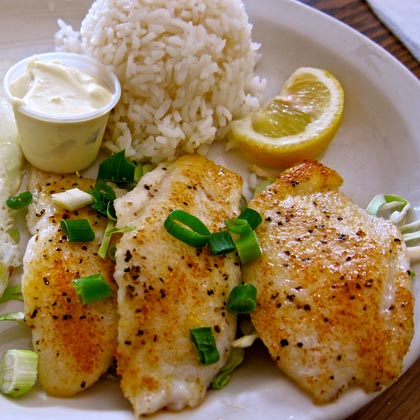 Finally, in recent years Albariño has also been likened to a “light-weight Viognier,” which is not just insulting, but absurdly inaccurate.  Although the flowery fruitiness of a good Albariño may be somewhat Viognier-like, the minerally notes typical of Albariño are almost never found in Viognier.  Classic Albariño tends to be lighter in weight than a Viognier, and is also decidedly zestier in acidity – two qualities giving it a distinct advantage over Viognier in terms of seafood versatility (which is not to say Viognier is not as food-worthy – it’s just a different animal, begging for more aggressive, meatier matches in a fashion closer to Chardonnay than Albariño).

To deepen your understanding of Albariño, it is helpful to get a feel for its native Rías Baixas in Galicia, occupying the northeast corner of Spain directly north of Portugal along the Atlantic.  Unlike the rest of Spain (associated with dry, hot landscapes), Rías Baixas is green and verdant; which also means heavy rainfall, high humidity, temperatures rarely above 86° F., but almost never below 50º.  Albariño makes up close to 95% of Rías Baixas’ plantings (about 7,500 acres total) simply because it is the only grape with thick enough skins and high enough phenolics to thrive in these severe conditions.  Although vineyards were traditionally trained on pergolas to circulate air and avoid rot and mildew, modern day trellising and opened canopy management is what does the job today.

Like all great wine regions, Rías Baixas is a convergence of climate, soil and grape adaptation.  Of its five recognized sub-zones, the finest is said to be Val do Salnés, a gently rolling, alluvial basin situated at the northern end of this DO (i.e. Denominación de Origen).  This is also the coolest, wettest section of Rías Baixas, but Albariño responds positively to Val do Salnés’ well drained, rocky, pervasively granitic soils (even trellis posts are made out of granite rather than wood).  In Rías Baixas, Albariño’s lime/peach fruitiness, flinty minerality, and occasional salinity (undoubtedly derived from the sea salt saturated air) are as much reflections of the grape as terroir. 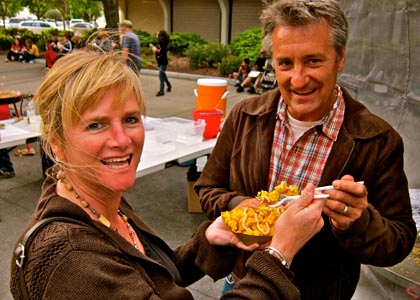 Lodi can be proud of the fact that the most significant Albariños grown and produced in California during the past ten years have been those of Bokisch Vineyards.  Markus and Liz Bokisch have been farming some 1,300 acres, mostly in the hillier eastern sections of the AVA (in sub-appellations like Jahant and Clements Hills), supplying some 115 different winery-clients.  But don’t get too excited:  out of all of this, less than 60 acres of Bokisch Ranches are planted to Spanish grapes; the bulk of it Albariño (now up to 35 acres), and the balance consisting of Tempranillo, Spanish clones of Garnacha and Garnacha Blanca, Graciano, and Monastrell (a.k.a Mourvèdre).

There’s some salient history behind the Bokischs’ devotion to Spanish grapes.  In the late nineties Markus was charged by Joseph Phelps Vineyards to source Rhône varieties for the winery’s Vin de Mistral line (long defunct).  It was while driving back and forth between Napa Valley and Lodi that Markus first felt the spirit:  the Sacramento-San Joaquin River Delta reminding him of the Delta de l’Ebre in Spain where many of his close relatives still live (although Markus was raised in California, he spent many childhood summers in Catalonia).  After leaving Joseph Phelps, Liz and Markus moved to Spain to work in the Spanish wine industry for a spell; returning to California in 1995 to start their Lodi-only grape growing business.

Less than 1% of what Bokisch Ranches grows ends up being bottled under the Bokisch Vineyards label, specializing strictly in Spanish style wines (although a 2011 Verdelho has just recently been added to the portfolio).  The Bokisch reds, if anything, have been steadily improving.  Surprisingly, their best wine early on in the game was probably their Graciano – making a velvety, if loosely constructed, varietal red – which stood out as something very unique (the Spanish having drastically reduced their own usage of Graciano – especially in Rioja, where Tempranillo has recently taken over, even in vineyards once devoted to Garnacha).  But in recent vintages, the Bokisch Garnacha has become brighter and prettier, and the Bokisch Tempranillo, undeniably svelte and elegant – both varietal bottlings now easily outshining their Graciano and Monastrell.

Early vintages of Bokisch Albariño were estate grown blends from two of Lodi’s sub-regions:  one from a 3 acre “mother block” (behind their home) falling within the Mokelumne River AVA, a flat site sitting in relatively deep, sandy alluvial loam typifying Lodi’s oldest growths; and the other from their Terra Alta Vineyard in the Clements Hills AVA – the latter, a slightly higher elevation appellation, marked by sloping, shallow, volcanic gravelly loam over hard clay, typical of the eastern side of Lodi where it transitions into the Sierra Foothills.

Since the classic U.C. Davis summation of degree days in Lodi is low Region IV – a warm Mediterranean climate, resembling center-of-Spain more than coastal (Atlantic) Spain – it has been interesting to see how the originally cold-climate adapted Albariño has adjusted to this part of California.  As the vines have gotten more mature, so has the Bokischs’ grasp of the grape.  As recently as in the 2008 vintage, the Bokisch Albariños were fairly big (over 14% alcohol), hugely aromatic wines – gushing with tropical flowers and fruits (pineapple, orange, tangerine, mango, grapefruit) – that could make even a Viognier taste small by comparison.

Since 2009, however, Markus Bokisch began to trust more in the grape by picking considerably earlier (closer to 20°, 21° Brix, as opposed to 22°, 23°); which according to Bokisch, required “a leap of faith, but necessary to making wine lower in alcohol and higher in acidity.”  What transpired for Bokisch are Albariños that are significantly lighter (around 12% alcohol), crisper and finer, while still possessing all the honeyed, citrus, tropical flower and wet stone fruitiness you look for in the grape.  The lithe and lovely 2010 Bokisch Albariño was a breakthrough, and the currently released 2011 is even better!

Because Bokisch is a supplier of grapes, other American producers have also benefited.  The 2011 Odisea Dream Albariño, for instance, is sourced from Bokisch’s Terra Alta Vineyard, and is a dry white of such lemony zest and spare yet flowery charms, it just screams to be taken to the next raw bar.  Says Odisea winemaker/owner Adam Webb, “I want my Albariño to be drunk with braised octopus, steamed clams, or anything with the smell and taste of salinity.” In fact, Webb swears he smells “ocean air” even in Lodi’s Delta region.

At last year’s 2011 TAPAS Grand Wine Tasting in San Francisco, there were several other Lodi grown Albariños showing similar:  notably, a steely, stellar, breathy 2010 grown by Harney Lane Winery; and a delicate, nicely filagreed Riaza Wines Albariño, also grown by the Bokischs.  Any wine that freshens the palate and soothes the soul as well simply cannot be wrong.

If not already, we hope that you, too, will soon become a TAPAS aficionado! 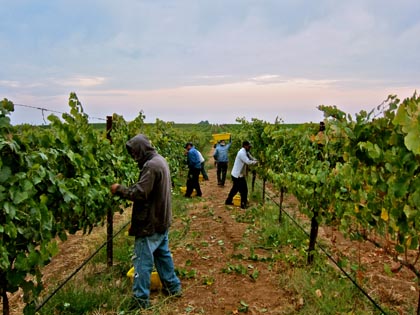