Stellina’s spice of life in a rarefied Zinfandel neighborhood 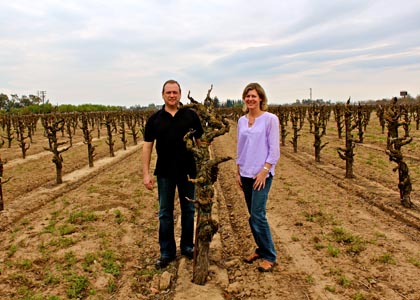 The exciting thing about the Lodi AVA is that new discoveries like this are happening with more frequency, as vineyards that for a long time were farmed in virtual anonymity – their fruit blended into big production wines by producers like E.&J. Gallo and Woodbridge – are now gaining recognition in boutique scaled single vineyard bottlings. 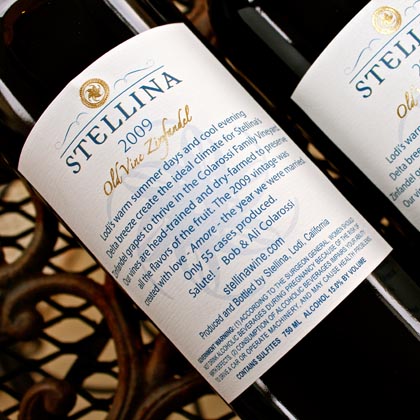 Owners Bob and Alison Liebich Colarossi first “discovered” their 40 year old, 9½ acre vineyard in 2007, while cycling through the vineyards.  On the property was an old house and barn that could be kindly described as fixer-uppers, but the specialness of the head trained vines was not to be revealed until 2008, when the Colarossis cherry picked a small amount – just enough to fill a barrel and a half – before sending off the bulk of the vines’ fruit to a giant winery client.

“We didn’t really have a plan insofar as becoming winegrowers when we first bought the property,” says Mr. Colarossi, “all we knew is we were ready to try something different.”  Willy-nilly, the Colarossis moved into a somewhat rarified neighborhood, on the west side of Lodi’s Mokelumne River AVA:  right alongside long venerated plantings such as Spenker Vineyard (dominated by Jessie’s Grove), the now legendary Bechthold (Lodi’s oldest continuously farmed vineyard), Lucas’ ZinStar, and extensive holdings by the Phillips (of Michael-David Winery), the Maleys (Maley Brothers), and other families tracing their Delta roots as far back as the nineteenth century.

In fact, Bob will admit, “we got busy and sort of neglected our first vintage, leaving it in the barrel for 27 months, which is way too long, especially since it was in new American oak.”  But who could blame them?  Besides completely restoring their house and turning their barn into a home office, in 2009 the Colarossis were in the midst of establishing Estate Crush – Downtown Lodi’s first winery and custom crush facility, located at W. Lockeford and N. Sacramento – with partners Nick and Sandy Sikeotis.  This, on top of their day jobs:  Bob as a globe trotting sports business executive (with International Gymnastics Federation), and Ali coming out of the public relations field, also on an international scale.

Still, the vineyard was a haven of bliss for the couple.  Says Bob, “when I taste the wine, I taste the vineyard – it always reminds me of walking out at night, smelling the earth and taking in the moonlight, always calm and serene.”  Northern Italian by lineage, he came up with an extremely apropos name for the vineyard and wine:  Stellina – “little star” or “starlet” in Italian.

Today, the 2008 remains stubbornly dark, broody, and tightly wound by both fruit and oak tannins; whereas the 2009 – picked at around 24.5° Brix, when Zinfandels are still piquant with natural acidity and most expressive of red fruit (raspberry/strawberry/cherry) characteristics – tickles the nose with varietal fruit expression, and skips blithely across the palate with smoothly textured flavors and the vineyard’s characteristic spiciness.

“So far it looks like the vineyard shows the most spice in odd years,” says Mr. Colarossi, tasting us on barrel samples of the 2010 (to be bottled in April) and 2011 (still a baby).  The 2010 (“a perfect growing season,” according to Bob) is extremely lush, velvety and floral – very much like the ’09 – with red veering towards blue berried fruit qualities.  The 2010 follows suit, but is even more intense in the clove and black peppercorn grinder spices, with a tart, mouth-watering edge of youth.

What gives Zinfandels their spiciness – the hot scent of cracked pepper, or the barky/vanillin eugenol scent of clove (Zinfandel spice is also often described as cinnamon-like, but most likely because cinnamon is associated with clove in cooking, rather than the fact that Zinfandels actually have the sweet scent of cinnamaldehyde)?  Curiously, Lodi zin connoisseurs often find more spice qualities in Zinfandels grown on Lodi’s east side, where soils tend to be sandier and thus better drained, which have the effect of producing fruit in slightly smaller clusters and with higher skin to juice ratios (factors that are, however, often mitigated by deficit irritation, cropping, picking decisions, and to some extent, clonal variation).

Needless to say, the spicy side of Zinfandel’s varietal character can be found in wines grown in a wide range of terroirs:  from the shallow, higher elevation slopes of Mendocino Ridge or the Sierra Foothills AVAs (especially Shenandoah Valley, Fiddletown and El Dorado), to deeper valley soils found in Napa Valley or Sonoma County (the Dry Creek, Alexander and Russian River valleys).

Some vintners say that spicy notes are emphasized by the vine’s natural tendency to grow uneven sized berries, or what is often called “hens and chicks”:  single bunches containing grapes that are overripe and raisined, grapes that are green and underripe, and grapes that are everything in-between.

Be as it may, the Colarossis prefer to pick their Zinfandel prior to the development of raisining in their clusters, aiming towards a moderate alcohol (less than 15%) style, showing redder as opposed to blacker fruit aromas.  Whatever the reason, Stellina appears to consistently yield Zinfandels with a stronger emphasis on spice than most Lodi grown Zinfandels, and the Colarossis are happy with the happenstance.

“Stellina is like the little star in the sky at night that catches your attention,” says Bob – reason enough for rest of us to celebrate!

You can find, and taste, the 2009 Stellina Zinfandel at the Estate Crush Tasting Room, which is open to the public Fridays through Sundays, 12 noon to 5 PM. 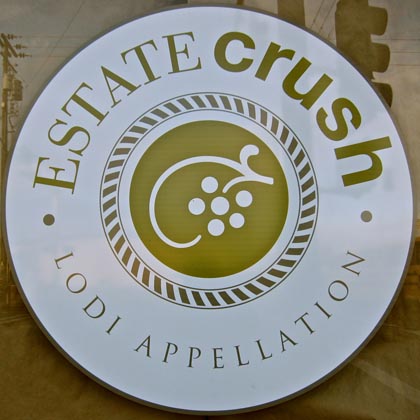