LangeTwins’ SLEWS project: waking up to smell the mugwort 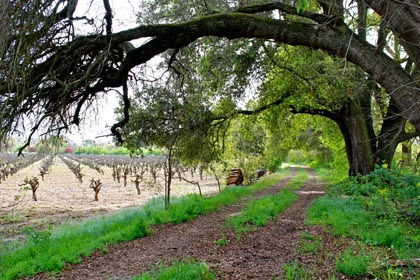 LangeTwins Family Winery & Vineyards has been among the Lodi AVA’s leaders in Lodi Rules certified sustainable winegrowing.  During the past eight years they  have also devoted some 10 acres north of their winery on E. Jahant Rd., plus another 10 acres on their Sandpoint property along the Mokelumne River, to habitat restoration projects in association with SLEWS – Center for Land-Based Learning‘s Student and Landowner Education and Watershed Stewardship program –which engages local high school students in the winery’s conservation efforts. 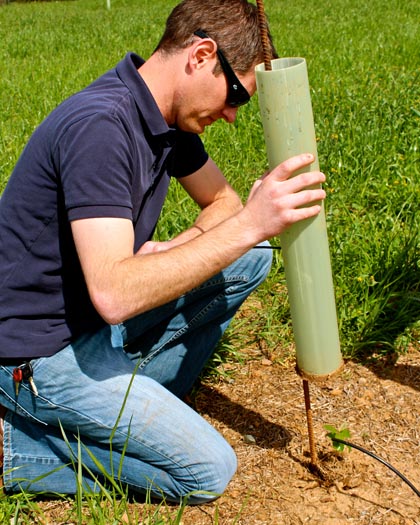 This past March, Aaron Lange – a fifth generation Lodi grower who holds the responsibility of directing LangeTwins’ enormous viticultural operations (some 7,200 acres in Lodi as well as the Clarksburg AVA) – took the time to talk about his family’s enthusiastic embrace of the SLEWS owner/stewardship program.  “Besides the plantings, the kids learn how to install drip irrigation lines and emitters, as well as boxes for birds like American Kestral.”

Pointing out newly sprouted mugwort and tiny sprouts of native oaks on the open field next to the winery, Lange says, “it doesn’t look like much right now, since the kids started this project just a few weeks ago, but come back in a few years and the open space will be gone – everything will look more like a wild, natural riparian forest.”

Adds Matthew Bronson, the San Joaquin County coordinater for the Center of Land-Based Learning, “when the students come back to see how their plantings are doing, they get a great sense of accomplishment.  SLEWS is a great way for kids to experience agriculture.  There’s a lot to be said for knowing where your fruits and vegetables come from.  But perhaps even more importantly, the students interacting with mentors from Audubon get a stronger sense of what type of careers are available to them.” 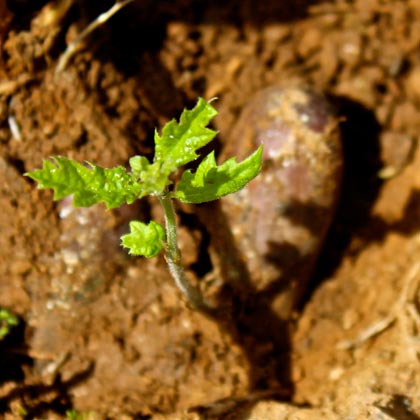 Aaron Lange belongs to the fifth generation of Langes carrying on a solidly agricultural heritage handed down from his parents, Randy and Charlene Lange, and all the way back to Johann and Maria Lange, who settled in Lodi in the 1870s.  Says Lange, “our family has always lived, worked and played essentially as outdoorsmen.  We’ve felt lucky to have farmland located next to rivers and sloughs, and so starting over twenty years ago, my father and uncle (Brad Lange) began to implement programs to bring the edges of our farms back to life.  They also took it as an opportunity to enhance what they were doing as farmers.”

The idea of planting native oaks from seedlings in the effort to re-establish native habitat buffer zones between their vineyards and waterways was begun back in the late eighties by the Lange twins, Randy and Brad.  Part of the motivation was to encourage proliferation of natural predators in order to enhance viticultural sustainability; and a significant part of that was the installation of hundreds of owl and songbird nesting boxes in the vineyards, along with Wood Duck boxes near the waters.

In 1995 the Langes began their Gill Creek Restoration Project:  the replanting of a creek bottom that had been abused by many years of cattle grazing –restoring it to as natural a riparian corridor as possible.  So in 2004, a partnership with the then-newly formed SLEWS at their Sandpoint property – alongside a parcel of old head trained Zinfandel and table grape (Flame Tokay and Cardinal) vines, originally planted in 1947 by the twins’ father, Harold Lange – seemed like a natural extension of their efforts.

Walking us through the Sandpoint corridor alongside the Mokelumne River, Lange points out that “some of the plantings have suffered setbacks, because the property has flooded a couple of times over the past seven years.  Even so, many of the saplings that looked like they might have died have been coming back on their own.  Our old Tokay vineyard by the river was pulled out precisely because of the periodic flooding.  The vines weren’t doing so well, but it gave us a chance to go in and pull out the invasive plants, and work with SLEWS to re-introduce oaks and buckeyes, wild rose, elderberries, willows, and other native plants, and give some of that land back to Mother Nature.”

Coming up to a thin path of bare dirt between wild grasses leading to the riverbank, Lange tells us, “this wasn’t made by us, this is a beaver slide.”  Along the river, there is an old 4 ft. wide cottonwood with a considerable chunk of its lower extremities gnawed clean away.  “You see where the beavers have been busy,” says Lange.  “We have to place wire fences around the younger trees we are trying to grow to keep them from becoming part of the beavers’ selection.” 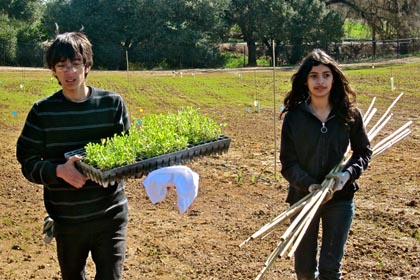 Also next to the river is a four legged tower poking through oak branches, topped by what Lange describes as a “bat condo,” built by the family for their fine furry friends.  Lange tells us, “there are over 5,000 bats in residence, and like the owls, ducks and songbirds, they are very much a part in our sustainability program.”

Lange tells us, “we benefit as much as the kids from projects like SLEWS because it just encourages us to increase our efforts to restore the natural balance to our lands.  Each little bit plays a part, like when you bend down to touch the mugwort planted by the students, which gives you the distinct smell of the Mokelumne River – things like that only increase your appreciation of what you have!” 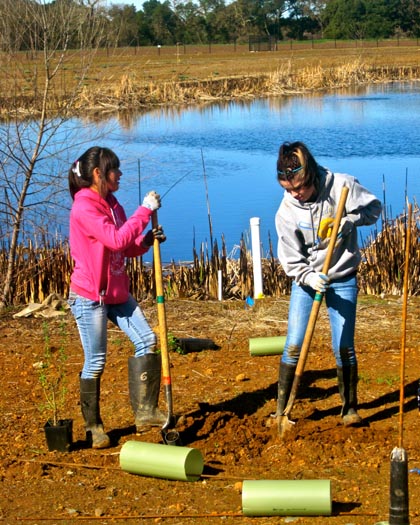 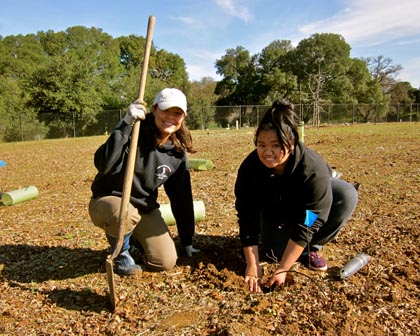 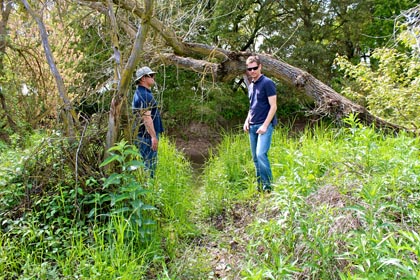 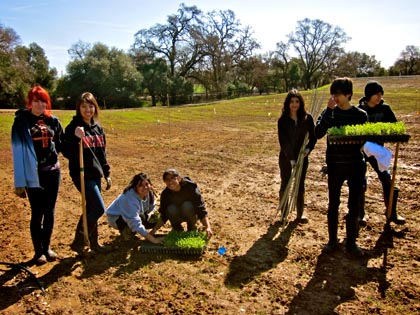