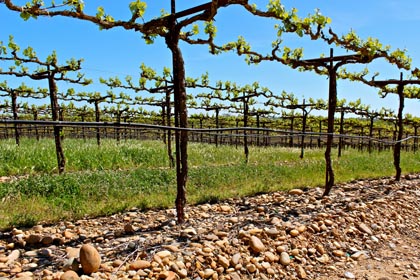 Of the seven sub-appellations – officially called American Viticultural Areas (i.e. AVAs) – within the greater Lodi AVA, the Sloughhouse AVA (officially recognized in 2006) is among the least known, despite its incredible potential. 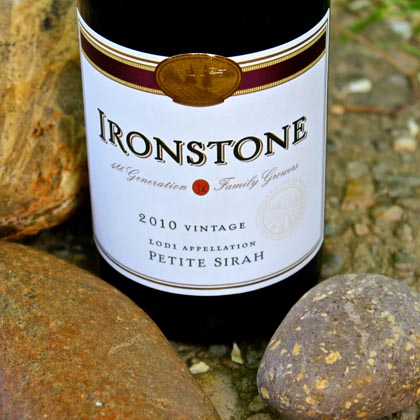 Ironstone Vineyards‘ Petite Sirah may not be the biggest example of this varietal produced in California or the rest of Lodi; but unquestionably, it is one of the most exotically spiced Petite Sirahs you will ever find.  If spiciness is like clouds your coffee, then your dream has come true.  The secret?  According to Ironstone Vineyards’ longtime winemaker, Steve Millier, it is the Sloughhouse appellation that makes Petite Sirah so special; particularly, the hilltop where the grapes are grown — a 10 to 20 ft. deep pile of almost pure, smoothly rounded riverbed rocks, each averaging almost the size of fists.

“We like the site because of the rocks,” says Millier.  “The rocks restrict the growth of the vines.  This concentrates the flavors in the grapes.  We don’t have to do much shoot or cluster thinning – the rocks do all this naturally, which also means that we can pick the crop sooner, before problems like mildew or rot occur (the latter, not uncommon problem to Lodi, where in 2011 some 20% of the region’s Petite Sirah was lost to bunch rot).  We’re picking perfectly ripened grapes in mid-September rather than in October, and usually around 24° Brix (i.e. sugar readings), which allows to produce a wine that is moderate in alcohol, usually around 13.8%.” 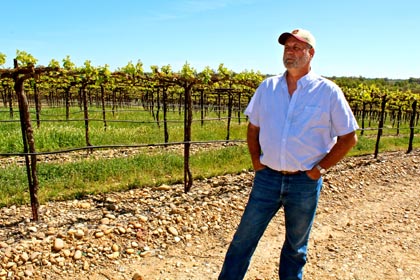 John Kautz Farms – the agricultural arm supporting Ironstone Vineyards – owns about 3,500 of the 7,000+ acres of vines in Sloughhouse; a good sum, especially when compared to the 2,200 or so acres farmed by Kautz further south in Lodi’s Mokelumne River AVA.  The family’s first Sloughhouse vines went into the ground in 1989; and their Teichert Ranch, from where the Ironstone Petite Sirah is sourced, was planted in 1997. 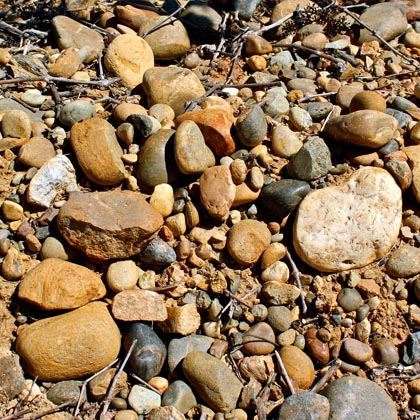 There are no wineries located in Sloughhouse, nor any visible signs of vines until one drives east of Hwy. 99, past the little town of Elk Grove (between Sacramento and the city of Lodi).  When you do see vineyards, what is visible from the road is only a fraction of what’s been planted by major Lodi growers like Kautz Farms and Vino Farms:  mostly Cabernet Sauvignon and Chardonnay, with considerable amounts of Sauvignon Blanc, Cabernet Franc, Merlot and Zinfandel; and smaller proportions of grapes like Petite Sirah, Syrah, Primitivo, Semillon, Viognier, plus more exotic varieties like Tannat, Ruby Cabernet, Muscat Canelli and Muscat Orange.

The rolling hills of Sloughhouse get as high as 590 ft. in elevation; and visually, bear a resemblance to the lower foothills of Amador County.  Like Amador County, this is considered a “warmer” region; but according to Kautz Farms Vineyard Manager Tim Chappell, “Sloughhouse is also an area of lower lows.  Winters are cooler than the rest of Lodi, and so our bud break is usually 7 to 10 days later than the rest of Lodi’s.  All except the lower lying river bottom areas see a lot of Delta breeze, giving the grapes the benefit of increased air circulation, and slightly longer, healthier hang time.”

In terms of soil types, Sloughhouse is not cut from one cloth.  Chappell cites sandy spots in areas that, not too long ago, were mostly underwater; as well as areas of higher, slower draining clay content, which nonetheless produce very intense Merlot, Sauvignon Blanc and Chardonnay.  Explaining the hilltop piles of riverbed rock where grapes like Petite Sirah and Cabernet Sauvignon have been growing so well, Chappell tells us that “if you look at old maps going back to the 1930s, you see that the topography of the area was a lot different than it is today.  Before the levees went in, the water table was much higher, and there were a ton of tributaries coming off the Consumnes River and Deer Creek, which run through AVA today.

“Long before that, the Indians knew this area well for its wildlife and fishing.  They were always camped out along the waters, and they took advantage of the Delta breezes and varying topography the same way that these wine grapes do today.”

Adds Chappell, “it took a few years for our Sloughhouse vineyards to mature, and now our winemakers are extremely excited about the quality of practically all the grapes coming off of these ranches.  This is Lodi grape growing at just about its most intense, and it’s now showing in the wines.” 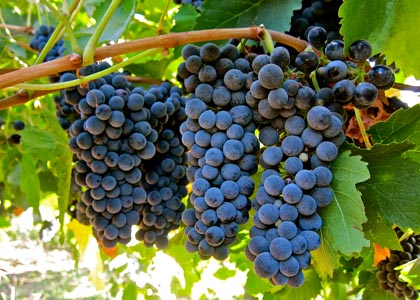