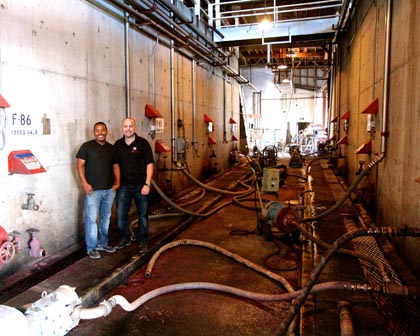 Beneath the low key, grayish, mild mannered label of the newly released 2012 Concrete Lodi Zinfandel ($45) lies a big, flashy, super-powered expression of the grape, which has come to exemplify Lodi's viticultural heritage. 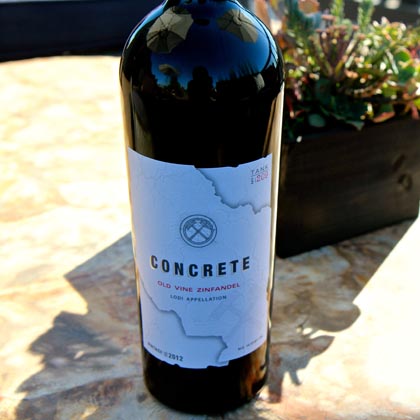 Concrete Wine. Co. winemaker Joseph Smith, who is also the winemaker for Klinker Brick Winery, makes no bones about what he and his two partners – Tyson Rippey and Barry Gnekow of The Lodi Vintners Group (where the Concrete Zinfandel is available for sale) – endeavored to do when conceiving this new brand: "We wanted to make a high end Zinfandel as good as any other Zinfandel in California, not just in Lodi.

"The question for us was, how far can we push to make a bigger and better Zinfandel? We decided that there would be no budget for this project – we want this to be a no-holds-barred style of Zinfandel."

First, let's talk about the wine, and then tie in the sensory ramifications of the three partners' approach. The 2012 Concrete Zinfandel is indeed a vivid, purplish, opaque dark red, with a generous nose plummy with the classic berryish profile of the varietal. There is a sweet oak quality tinging the aroma, but it is deftly blended into the wine's teeming fruit character.

In the mouth, the Concrete Zinfandel is full and fleshy (15.5% alcohol), with plump fruit sensations brightened by zesty acidity; the sweet oak (combinations of 60% new and neutral French and American barrels) and fruit tannin qualities filling in to give a layered, rounded feel.

In other words: if you're looking for zin that can outzin the best of 'em, the 2012 Concrete Zinfandel seems to have the goods.

Top quality Zinfandel, of course, starts with top quality vineyards; and since The Lodi Vintners Group winery is also where Klinker Brick wines are made, Smith, Rippey and Gnekow have access to some of the best Zinfandel juice sourced from Lodi's east side, where Klinker Brick owner/grower Steve Felten farms. 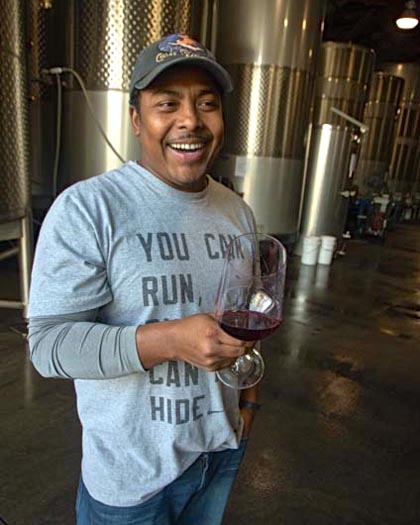 According to Mr. Smith, "The 2012 Concrete comes primarily from three of the best lots, selected out of our entire inventory. The blend had the Zinfandel intensity, but we felt that we could bump up the tannin a little bit, to give it a little more structure and ageability – so we blended in 3% Cabernet Sauvignon from a very expensive vineyard in Napa Valley."

Just as important, says Mr. Rippey, is the fact that "Concrete Zinfandel is a combination of both old and new technology. The old, traditional part, making up 60% of the wine, is the concrete tank in which the wine was fermented."

When The Lodi Vintners Group purchased the winery at its present location along Woodbridge Rd. – in the little CDP of Acampo, just north of the City of Lodi – 25 years ago, they also took possession of hundreds of big, squared, concrete tanks, each one capable of fermenting or aging over 20,000 gallons of wine at a time. Rippey tells us, "The winery itself is the oldest continuously operated winery in Lodi – it started as the Urgon Winery in 1900."

Urgon Winery, in fact, was founded by an enterprising German emigrant named Adolph Bauer, who recognized a need at a time, during the late 1890s, when many Lodi farmers were transitioning from watermelons to grapes. Bauer, with the help of his partner John Guggolz, established the first independent facility for wine and brandy production in the Lodi region. Prior to that, Lodi growers were forced to sell most of their grapes to El Pinal Winery, located further south in Stockton.

According to Rippey, "Because we can see that the concrete vats were set by plywood, which was invented during the Second World War, we know that these fermentors were constructed during the 1940s. Concrete fell out of favor in recent years, but it's been making a comeback. Today, many of the world's finest wines, like Château Cheval Blanc and Pétrus in Bordeaux, are fermented in concrete. We make use of all our concrete tanks, which have been retro-fitted with stainless steel coils to give us temperature control."

The other part of the equation – the new technology – making up 40% of the 2012 Concrete Zinfandel involves the use of The Lodi Vintners' Flash Détente machine. Flash extraction basically involves rapid heating of grapes (2-5 minutes) to very high temperatures (up to 190° F.) followed by instantaneous cooling in a vacuum chamber, resulting in a rupturing of the skins and immediate release of color, tannin and skin colloids into the juice. 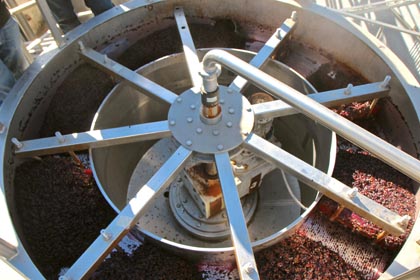 The Flash Detente, just above its high temperatural vacuum chamber

When red wines are normally made, fermentation of the must (i.e. freshly crushed juice) is done in contact with grape skins, since it is in the skins where you get all the color and phenolic compounds contributing to flavor. The Flash Détente extracts juice with all the color and phenolics you need without the skins, allowing for fermentation of red wines in barrels (similar to white wines, which are pressed and fermented without skins, in barrels or tanks).

Rippey describes their approach, employing concrete fermentation as well as Flash Détente extraction, as "a combination of old school and space age technology." Adds Smith, "The juice you get from Flash Détente can be a hundred times stronger than what you can get from traditional methods. Barrel fermentation allows us to take enhancement of varietal fruit character to a whole other level, and results in more subtle oak character.

"The only issue with wines from Flash Détente is that they can have a little hole in the middle. That's where blending with Zinfandel fermented in concrete tanks comes in. It gives us that combination of big fruit and bold structure – the old methods can enhance the new.

"What impresses me," adds Rippey, "is that we have the fruit, and we have the capability, to produce a Zinfandel in Lodi that can compete with Zinfandels from anywhere in California. So we're going for it!" 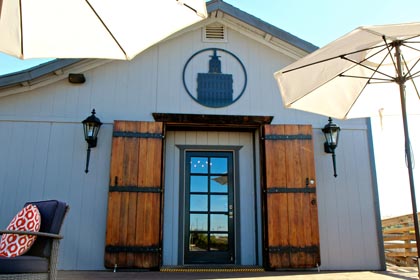 The tasting room at The Lodi Vintners Group on Woodbridge Rd.