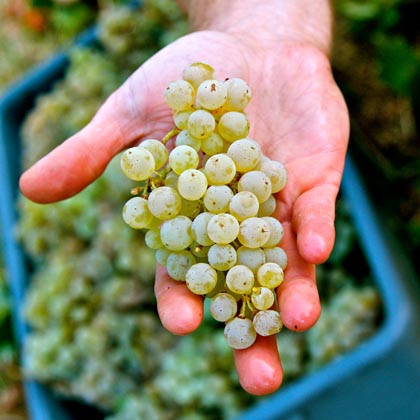 You might have heard that some crazy, unlikely, yet very in-ter-resting (to quote Arte Johnson) things have been happening in Lodi these past few years.

A lot of this activity has been emanating from one winery: Borra Vineyards, where owner/grower Steve Borra Sr. and winemaker Markus Niggli have been making waves. 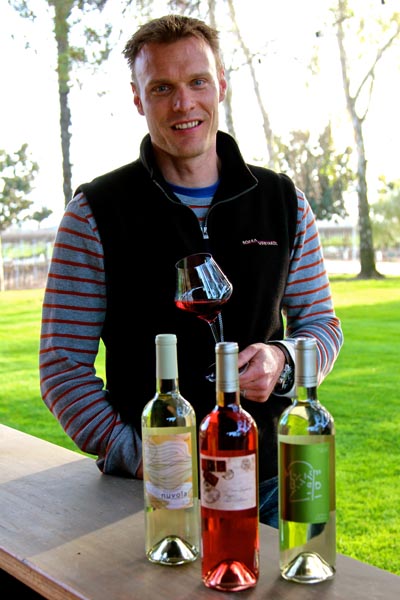 Equally significant is the 2013 Borra Lodi nuvola ($19): a lemony crisp, 100% Gewürztraminer fermented bone dry in stainless steel tanks (also seeing no oak). Although there may be nothing unusual about a dry, unoaked Gewürztraminer, the unusual aspect is its methodology: made from grapes picked at lower sugars (21° Brix), deliberately before the grape achieves its fully ripened, tropical lychee/rose petal/peppery spice perfumed intensity – that is, the full fledged varietal character associated with the grape’s name (gewürz, or "spicy," Traminer).

Instead, the Borra nuvola was picked at lower sugars to allow for native yeast fermentation with higher natural acidity (fully ripened American Gewürztraminers are routinely acidified to make up for that, even in colder regions like Mendocino's Anderson Valley).

The result, in Borra's nuvola, is more of a delicate citrus blossom fragrance, with light lavender/violet-like nuances, rather than extravagant lychee-like varietal fruitiness. On the palate, the nuvola's lemony edge is zesty without being sharp; fresh and mouthwatering within its a moderatedly weighted (a light tasting 13.6% natural alcohol) body.

What is the story behind these new fangled wines? It started a few years ago when Borra Vineyards, Lodi's oldest bonded winery (since 1975), hired a Swiss born and trained winemaker named Markus Niggli. A lot of credit goes to the Borras for trusting in Mr. Niggli's instinct to fashion European style wines – particularly native yeast fermented wines that emphasize more acidity, and as much minerally or earthy qualities as the usual California grown fruitiness – from the family's extensive plantings in Lodi's Mokelumne River and Clements Hills appellations.

Along the way Niggli also discovered a vineyard named Mokelumne Glen, located on a gently sloped, sandy, alluvial bend in the Mokelumne River, on Lodi's east side. The vineyard was planted with, of all things, over 40 varieties of German and Austrian grapes by a retired school teacher named Bob Koth. Koth is a Lodi native who, it seems, caught an incurable winegrape bug after visiting his daughter Ann-Marie in Germany, who was studying in Mainz on a Fulbright Scholarship during the early '90s. 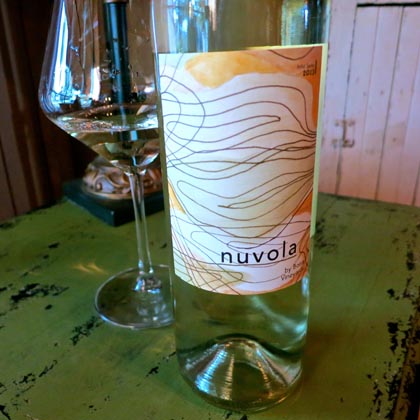 The art label for Borra’s nuvola (Italian for “sky”) expresses the light, feminine, cloud-like qualities of the wine

Returning home to Lodi, Mr. Koth, an academic at heart, decided to go full bore with all the exotic grapes he could get his hands on: not just several clones of the famous Riesling grape, but also less popular grapes such as Silvaner, Gewürztraminer, and Grüner Veltliner; white wine crossings like Müller-Thurgau, Scheurebe, Rieslaner, Ehrenfelser, Kerner, Kanzler, Bacchus and Oraniensteiner; black skinned crossings like Dornfelder, Blaufränkisch, and Zweigelt; multiple varieties of "Pinot," such as Spätburgunder and Frühburgunder (German clones of Pinot Noir), Weissburgunder (a Pinot Blanc), and Grauburgunder (Pinot Gris)… and more, much more. 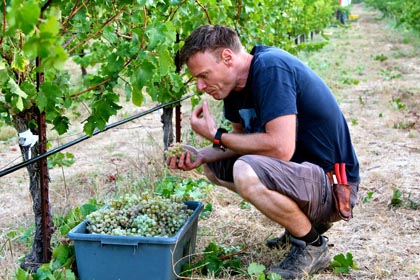 Since Borra's Intuition White was barrel fermented in a style inspired by some of Austria's more innovative winemakers, Niggli felt the need to fashion an even more contemporary, 100% stainless steel fermented white wine; and so in 2012, he crafted the first editions of his Borra Artist Series White (an $18 blend of Kerner, Trollinger and Riesling) as well as a Borra Artist Series Riesling ($18) – both wonderfully light (barely 12% alcohol), crisp and pure white wines.

Niggli makes no bones about Borra's movement towards what he calls "Northern European" style whites. "The point of the Artist Series is to go in a feminine direction," says Niggli – "lighter white wines with a soft, approachable feel, appealing to feminine wine drinkers, or anyone else who prefers that. We're also picking the grapes at lower sugar levels – no more than 20° or 21° Brix – so that we can ferment with natural yeast, and retain completely natural acidity.

"This is particularly important for grapes like Kerner and Bacchus, which can easily end up tasting flabby or fat if sugars are too high. Riesling gives us more acidity, but we don't always get as much Riesling as we'd like from Mokelumne Glen."

Niggli adds, "The result is wines that don't taste like anything from Lodi" – although the fact of the matter is, these wines don't resemble anything in California, except perhaps for a few of the new varietal whites made from Italian grapes recently grown in Santa Barbara and Mendocino. "If anything," adds Niggli, "it shows everyone what Lodi can do."

And if Lodi can do German white wine grapes well, you almost have to ask: what can't Lodi do? 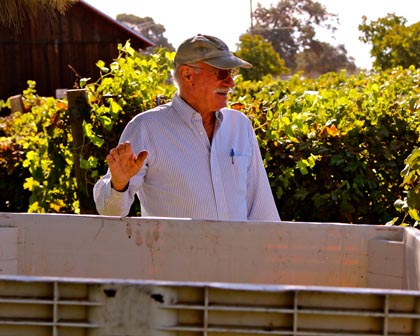