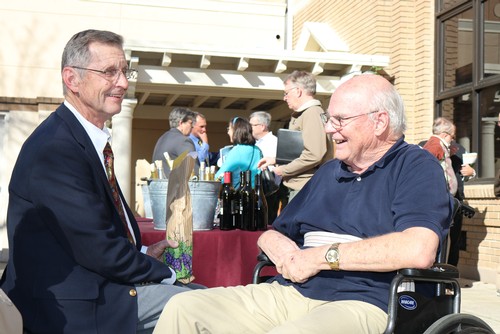 Paul Verdegaal, left, and Lloyd Martel share a laugh during a reception to honor Verdegaal, who is retiring from the University of California Cooperative Extension of San Joaquin County. (Photos by Marcy Sousa)

His predecessor at the University of California Cooperative Extension of San Joaquin County, the late Jim Kissler, was a legend, according to several winegrowers and colleagues who spoke at a recent reception to celebrate Verdegaal’s retirement during the 66th annual Grape Day at Hutchins Street Square in Lodi.

Verdegaal not only filled those big shoes, he created his own indelible footprint on the winegrowing community in Lodi and beyond. Kissler’s son, Brad, said Verdegaal earned the nickname “Jim Jr.,” the ultimate compliment.

“My dad wanted Paul so much for that job,” Brad Kissler said. “He knew he would do a good job.”

Many said Verdegaal will be tough to replace.

“As another walking textbook now walks out the door,” said Jim Wolpert, who worked closely with Verdegaal at the state level for many years and traveled from Missouri to honor his friend, “the challenge is to find somebody with that knowledge.”

Stories flowed during the reception on a beautiful, sunny afternoon.

Lloyd Martel, who planted one of the first Cabernet Sauvignon vineyards in Lodi and taught at San Joaquin Delta College, recounted the time he and Verdegaal traipsed into a vineyard that had been slip plowed.

“We go up there and he’s taking pictures and all-of-a-sudden he said, ‘I’ve lost my (wedding) ring,’” Martel said. “I said I’ll do my best to help you find it. And he had to be at some meeting. To make a long story interesting, I found it with a metal detector. And I have lost mine in my vineyard. I can’t find it.”

Mick Canevari, who served on the committee that hired Verdegaal more than 30 years ago, said Verdegaal’s office is filled with books.

“His office is like the Library of Congress when it comes to wine books,” said Canevari, farm advisor emeritus with the University of California Division of Agriculture and Natural Resources. “He has everything ever printed about grapes and wine. Most people just stack them there because they look good. Paul read every dang one of them.

“He is extremely bright. I think that sort of has been hidden because he is unassuming. But he has a mind like a steel trap. There is nothing in the industry that he doesn’t know historically. It’s been a passion and I think we’re honored to have him as an advisor.” 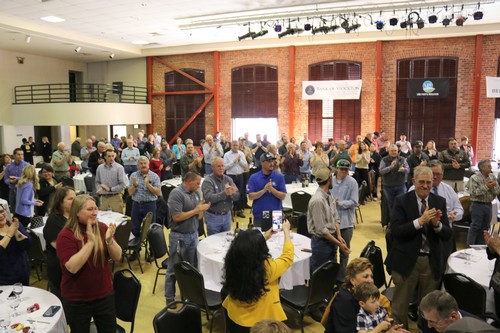 Paul Verdegaal received a standing ovation when he was introduced at a luncheon in his honor on Grape Day at Hutchins Street Square.

Verdegaal’s encyclopedic knowledge certainly benefitted his constituents. But what made Verdegaal beloved was his dedication to helping growers in need, no matter the time or day.

“I don’t care if it was a Saturday or after hours, if it was a grower who called, Paul was always there to respond to their needs,” Canevari said. “So, I think we’re all blessed being able to work with Paul.”

Verdegaal said the mission of the UCC extension always has been service to the growers and the community for the people of California.

“I felt like I owed them that much,” Verdegaal said. “When people call with their problem it becomes my problem. Everyone in a difficult situation needs a little help.”

Verdegaal built a base of support. Most every grower knew him. Verdegaal didn’t sit in his office behind a computer. He went into the field and spoke face-to-face with growers. He showed genuine interest in their operations.

Verdegaal served on countless committees and helped develop with Dr. Cliff Ohmart the workbooks that became the LODI RULES for Sustainable Winegrowing.

Stuart Spencer of the Lodi Winegrape Commission and St. Amant Winery has worked with Verdegaal over the years in various capacities.

“He was a perfect example of cooperation between an entity like the Winegrape Commission when it was established, and he didn’t see us as a threat,” Spencer said. “He saw it as an opportunity to pick his activities and make it that much more. I’ve always had a great deal of trust in Paul. He was somebody I could always ask a question and get an honest answer.”

Growers and industry members knew if they needed advice or help, Verdegaal would give it to them straight.

“He’s just blatantly honest,” Canevari said. “He just tells it like it is and he’s not trying to win points. He’s just trying to help you understand what’s right.”

Verdegaal said the outpouring of well-wishes from the community has been overwhelming. He said he has learned as much from the growers as the growers have learned from him.

“I know some growers were appreciative of my work over the years, but it’s been a mutual thing,” Verdegaal said. “I’ve been very thankful for their support and trust. Today was kind of overwhelming in some respects, but it’s just indicative of the Lodi growers.” 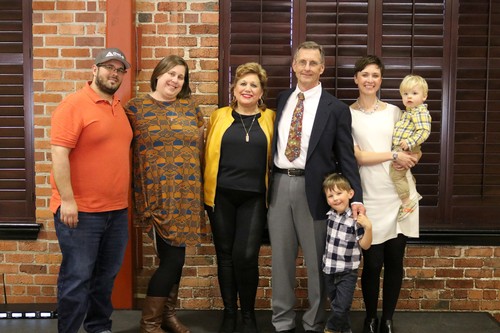 Paul Verdegaal with his family.

Verdegaal said whenever he had groups come through Lodi, whether they were academics or other industry people, they all said the same thing: “Those people in Lodi are a different group,” he said.

“And I’d say, ‘Yeah, they are a very tight-knit group, very open to new ideas and new people.’ So, it’s been great working with them.”

Verdegaal will assist the UCC Extension of San Joaquin County until a replacement is found. He has high hopes for Lodi’s future.

“There is a long-term sustainable program here for growing quality grapes at a reasonable price,” Verdegaal said. “The growers are blessed with the resources they have.”