This week, Happy Veraison from Lodi! 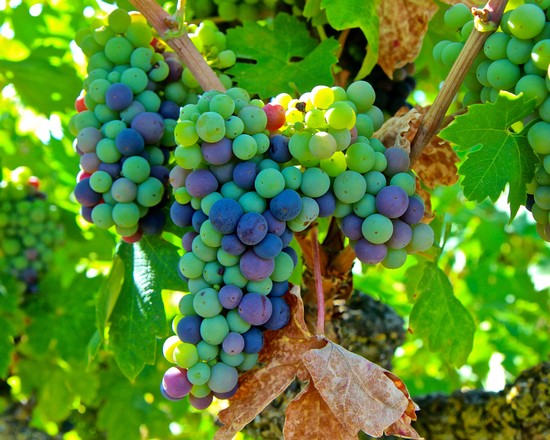 As of mid-July 2017, it’s that time of year again in Lodi wine country – the start of veraison, the handy French term (véraison) for “change of color of grape berries.” Call it a coming of age (a vinous bar mitzvah?) of grapes, which happens in an often spectacular blaze of colors, from greens to reds and purplish blues and blacks.

But it’s not just the transitioning of hues that grape growers see in their vineyards. To them it also means grapes have a reached a mid-point of develpment; when berries cease accumulating green mass and begin to accumulate sugars and flavors instead, which will make fermentation happen and lots of wine lovers happy.

Lodi’s old vine Zinfandels (since they tend to carry less crop, and thus push ahead in the ripening process) are usually among the first vines to undergo this riotous change. Other grapes such as Cabernet Sauvignon or Carignan, by nature of those grape types, will lag behind by two, three, even four weeks. But once red wine grapes turn color, final ripening (and harvest) is roughly six weeks behind, depending upon Mother Nature. 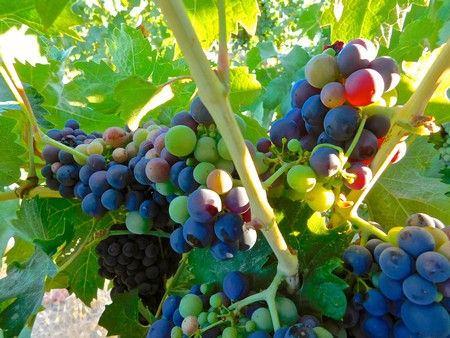 In Practical Winery & Vineyard, viticulturist James Kennedy talks about some of the technical things that happen with the onset of veraison:

“Some compounds produced during the first period of growth (i.e. pre-veraison) are reduced on a per-berry basis (not simply diluted) during the second period of berry growth. Principal among these is malic acid...

“The composition of extracted seed tannins changes considerably, and is characterized by a proportional reduction in the most bitter tannin components....

“Skin tannins decline or remain constant during the second period of growth (i.e. post-veraison), and also become modified. Significant modifications that take place for the skin tannins include an increase in their size. Also of potential significance from a wine quality standpoint is evidence that extracted skin tannins are modified with pectins and anthocyanins (i.e. pigments).... an important consideration in the areas of wine texture and color stability... 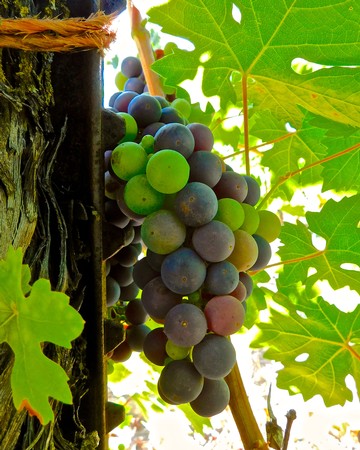 “Notable aroma compounds that are produced during the first period of growth decline during fruit ripening. These include several of the methoxypyrazine compounds (often shortened to pyrazines) that contribute vegetal characters to some wines (such as Cabernet Sauvignon and Sauvignon blanc)...

“Despite these major changes in compounds produced during the first growth period, the big story following veraison is the tremendous increase in compounds – the major ones being glucose and fructose (i.e. sugars!) – that occurs as a result of a total biochemical shift into fruit ripening mode...”

In other words, grapes begin to get sweeter, tannins in skins and seeds start to get less bitter, acids get less sour, certain grapes taste less and less vegetal, and the aroma and flavor compounds that eventually emerge during the fermentation process begin to form, primarily in the skins of grapes. 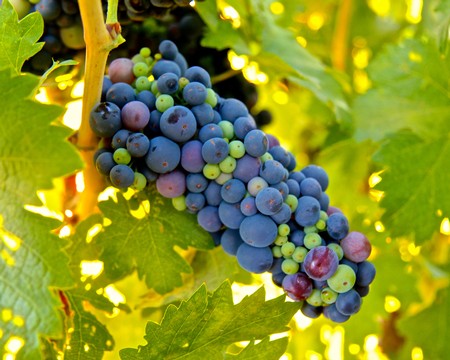 In the wild, the final stage of optimal ripeness is a matter of grapes making themselves more attractive to birds, bears, deer and other animals, who would then be compelled to eat the grapes and distribute the seeds through their digestive systems – thus, helping the plants to remain fruitful and multiply.

Cultivators of propagated commercial wine grapes, of course, would much prefer if birds and mammals kept their beaks or mouths off of the fruit, leaving them to the picking crews or mechanical harvesters. But anyone who has tried cultivating grapes (or any soft skinned seeded fruit) in their backyard knows it's always a challenge getting to fully ripened fruit before those pesky birds.

As for wine lovers, it’s a matter of anxiously waiting for something delicious to be eventually crafted and bottled; to be consumed from a tulip shaped glass with civilized meals at the table.

A few more shots of what's happening out in the Lodi fields as we speak: 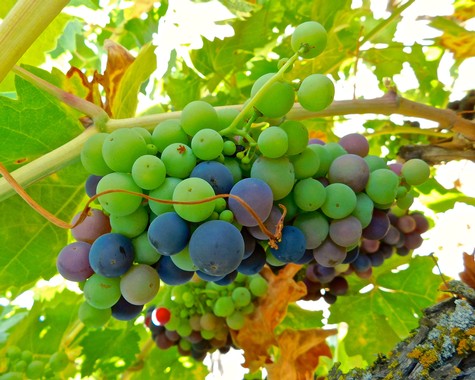 In Lizzy James Vineyard on Lodi's east side: nothing like the colors of old vine Zinfandeul during veraison 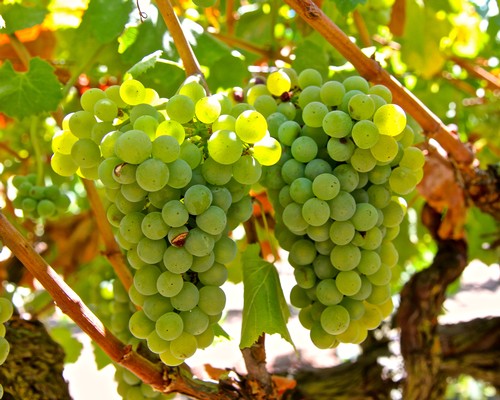 Mid-July Chardonnay in Bare Ranch (Phillips Farms): according to Michael David Winery Director of Operations Kevin Phillips, 2017's Chardonnay will be picked the first week of August for sparkling wine production; and probably ready for a first table wine picking by August 14 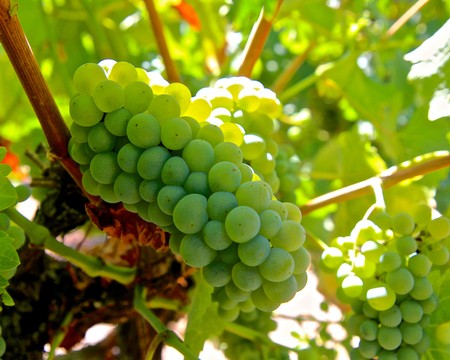 LangeTwins Family Vineyards Sauvignon Musqué: probably less than a month away from harvest 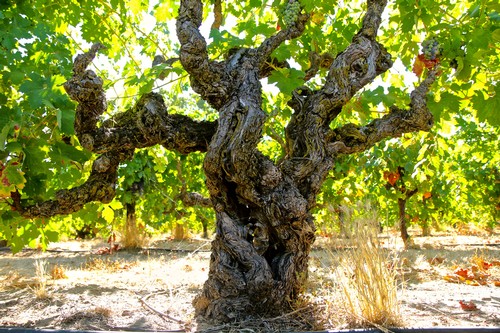 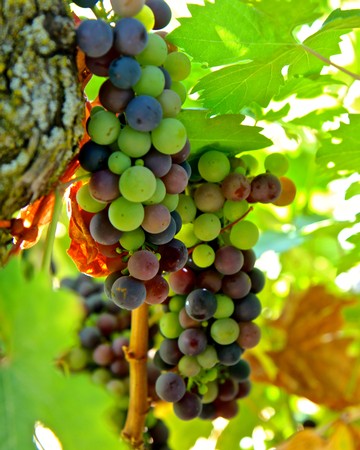 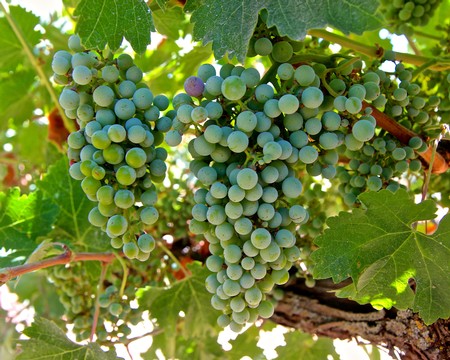 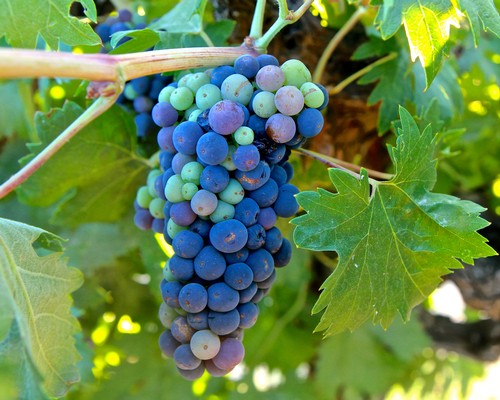 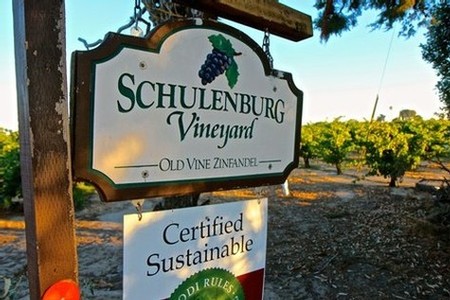