The pros, cons and (ultimately) necessity of mechanically cultivated vineyards in Lodi 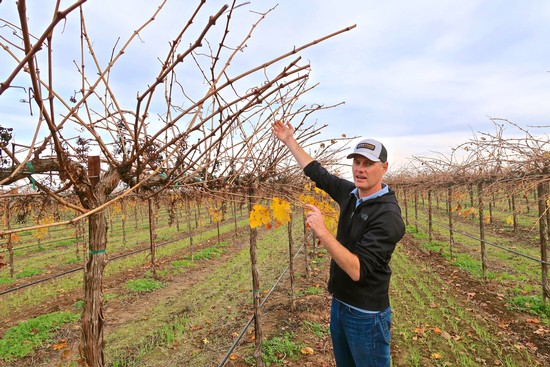 Feast or famine, supply and demand, boom or bust: That's the story of business everywhere, and it's no different in San Joaquin Valley where the leading crops — almonds, walnuts and wine grapes — are at a high because of recent demand, while supply, costs, tariff wars, and a myriad other challenges are threatening to put a kibosh on the whole thing. Particularly wine grapes, where the Lodi Viticultural Area not only competes with the the rest of California and the U.S., but also an entire world flooded with product planted for booming wine markets.

LangeTwins Family Winery & Vineyards — a family descended from Johann and Maria Lange who first settled in Lodi in the 1870s, establishing their first vineyard in 1916 — has always taken an industry-leading approach to the long term sustainability of their farming heritage. One of the visible manifestations has been in their systematic replanting of vineyards in a somewhat "new" fashion (nothing in the wine industry, which is thousands of years old, is ever really new — just more refined than before) that looks far more minimalist than many other trellis systems popular in California over the past 50 years. 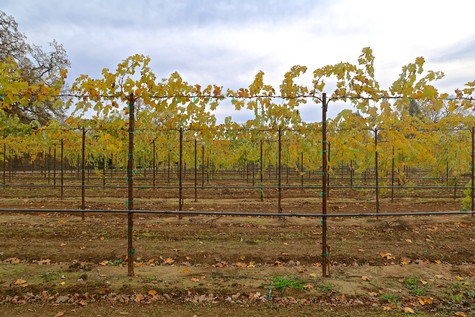 This latest trellis system involves just one, single wire trained about 6-feet off the ground (head-high for the average male) and looks like it is almost missing something, like the usual top-layering of wires to hold up the thick growth of leafy canes, or "canopy," absolutely necessary for the process of photosynthesis crucial to optimal fruit maturation.

What matters is not the look, of course, but what this somewhat elegantly composed planting method can do, which is facilitate an almost complete mechanization of things like pruning, leaf thinning and grape picking, without sacrificing the ever-increasing demands for quality — or, as put in current industry jargon, towards premiumization rather than commodity grape growing.

Since LangeTwins Family is a a leading exponent of this high top-wire style of trellising now being implemented all over the Lodi appellation by an increasing number of growers, this past December we asked Vineyard Operations Manager Aaron Lange to explain the benefits of this approach. We met in the family's One Hundred Vineyard property, a 100-acre planting of mostly Petite Sirah and Cabernet Sauvignon located between Jahant and Peltier roads in Lodi's Jahant AVA. 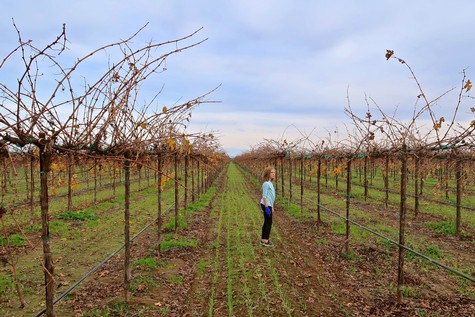 "We call this a 'high cordon machine pruned' trellis system — HCMP for short. We have about 600 acres of HCMP recently planted, starting in 2012, between our properties and vineyards we manage for clients. We believe it is the necessary step for the next generation of vineyards, which is to optimize vineyard management for mechanization.

"The concept involves a bilateral cordon on a single wire located 66 or up to 72 inches off the ground (our note: significantly higher than the 36-to-40-inch height of fruiting wires in the VSP or 'vertical shoot position' trellises far more prevalent in California vineyards), with a drip-line hose below, 24 inches above the ground. It's not much different from the old school 'California sprawl,' where bilateral cordons are topped by a single wire utilized as a catch-wire, and canes are allowed to sprawl over the sides to create a canopy spread out over the fruit zone. The idea of the high cordon system is to not allow any extraneous wires to interfere with a blade, a saw or sickle, especially for mechanical pruning. Pruning, when done by hand, is by far our biggest expense in vineyard management. 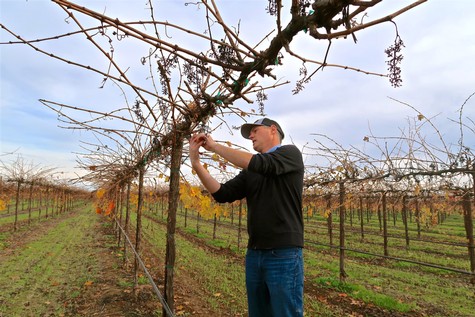 "Overall, we believe high cordons work very well with varieties that have a natural tendency to grow erect — or straight up rather than flopping downwards. Cabernet Sauvignon and Sauvignon blanc are examples of varieties that have upward cane growth, and don't require a lot of trellis support. Merlot and Pinot noir may be more challenging from a canopy management perspective in this type of system.

"Zinfandel and Petite Sirah are also challenging because they can over-crop on a single wire system, and you end up with a lot of bunch rot when clusters are packed in too close to each other. We get a more equally distributed fruit zone with our Cabernet Sauvignon converted to HCMP, and the open canopy from upward growing canes give us a beautiful speckled light, which is optimal for fruit maturation.

"On traditional VSP you have catch-wires on top to support the canes. In the high cordon system we need just one, single wire high off the ground to get more access to do things like mechanical pruning and leaf thinning. One of the challenges is that canes, even for Cabernet Sauvignon, will still have a tendency to roll downwards below the wire. This can be helped by following up with hand-work after mechanical pruning, to punch up the canes. As you can see in this particular block, most of the vines are not rolling downwards, and the system is working well. 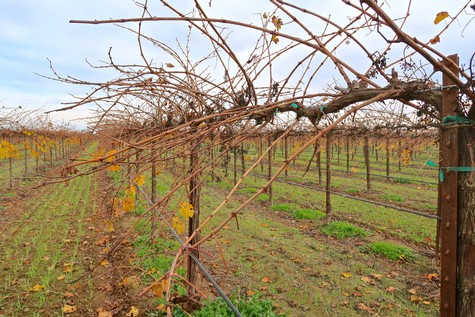 "We have 45 acres of high cordon Cabernet Sauvignon in this particular block (One Hundred Vineyard), which is now in its sixth leaf. In 2019 it delivered its third crop, and our winemakers will tell you that they've been very pleased with the quality. During the first three years we did a lot of things by hand, just to get it right. But like our other high cordon blocks put in about the same time, this block is now completely managed mechanically. Although we follow up everything by hand, to sort out the occasional runners, the work goes a lot faster than with, say, the Petite Sirah on modified VSP we also have in this vineyard.

"Of course, it does have its challenges. When vines overcrop, for instance, how do you thin the fruit? That, we have to do by hand, which admittedly defeats the purpose of going to mechanization. Other growers have been using paddles of a sort which brush along the bottom of the wires to mechanically thin fruit, which is not perfect because it leaves a lot of blind spots. To go mechanical, other growers are trying other things like quadrilateral wires (i.e. two parallel wires) with no catch-wires on top, but so far we are liking the high single wire. 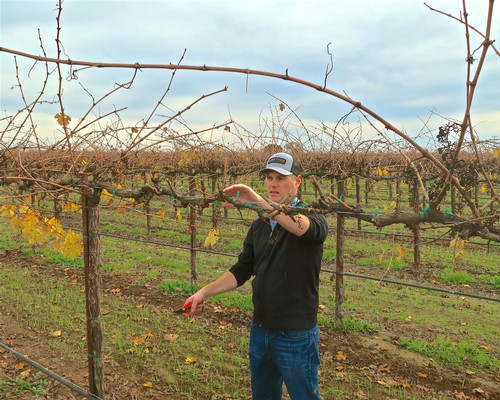 "Why is this important to the future of winegrowing industry, especially in a place like Lodi? It starts with the labor crunch. Right now the minimum wage is $13/hour, and by 2022 it will be $15. The overall cost of farming  has doubled over the past 20 years, whereas the prices we get for our fruit have not — in some cases, we're getting less than what we were getting 20 years ago! The numbers aren't adding up, and so we need a plan that involves reduced labor and more mechanization. The high cordon is not the solution for every variety or every area, but by prioritizing labor for varieties and vineyards that can't be converted to mechanization as easily we'll stand a better chance of sustaining our livelihood as grape growers. For other Lodi farmers, the solution is to tear out the vineyards and plant almonds instead. Our solution is to reduce our farming costs.

"Keep in mind, it is not that we are sacrificing quality either. Both of our head winemakers, David (Akiyoshi) and Karen (Birmingham), will tell you that they are actually getting amazing quality from these vineyards. It works out for grapes like Cabernet Sauvignon and Sauvignon blanc because you get a very balanced fruit/canopy ratio, which is always the key to optimal quality, not the amount of hand-work you put into it." 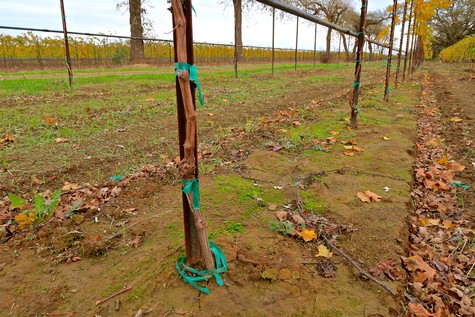 Viticulturist Stan Grant, who advises numerous Lodi growers through his Progressive Viticulture services, generously offered his own observations based upon his experience with what he calls high wire - machine pruned vineyards. According to Grant:

"The high wire - machine pruned concept has been proven valid in research trials and over many years in certain South San Joaquin Valley vineyards. The advantages include consistent high yields and compared to conventional vineyards, and low labor costs. These are, of course, positive attributes for vineyard operations in Lodi serving the lower price points of the wine industry. 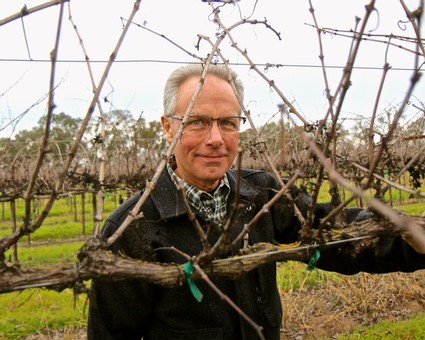 "There are few other viticultural advantages to high wire - machine pruned systems. There is an increased amount of permanent wood with a tall trunk that serve as a reservoir for stored reserves, which is important for consistent growth and fruit production. Also, the higher positioning of the cordons decreases the risk of frost and provides a more favorable environment for ripening compared to lower cordons.

"That being said, I hold some reservations about the sustainability of high wire - machine pruned systems, which hopefully will be proven insignificant. First, the machine pruning cuts I have seen are ragged, often leaving split spurs. Such cuts leave larger wounds that are slower to heal compared to clean cuts made by hand. As such, they are more prone to cordon and trunk disease infection.

"Another concern is the increasing portion of old cordon wood over time. In machine pruning trials I conducted during my time at E. & J. Gallo in the early 1990s, wood borers were sometimes found in two and three-year-old wood. Further, the crowded mass of old and new spurs could serve as an overwintering habitat for mealybugs and fungal disease inoculum." 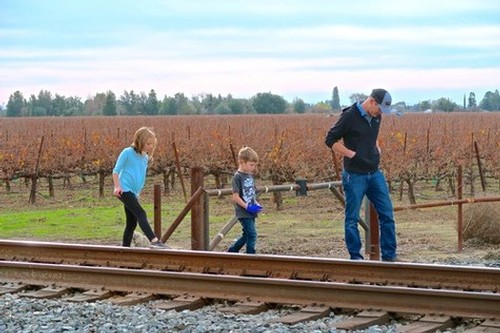 In a December 2018 Wine Business Monthly (a wine industry periodical) report on a "Vineyard Mechanization Showcase" event sponsored by the Lodi Winegrape Commission, Matt Frank, a viticulturist with Trinchero Family Estates (a major Lodi grower that is in the process of doubling its current acreage of HCMP vineyards, already at 2,000 acres), made note of the fact that high wire - machine pruned viticulture has "been used in Australia for 30 years... we planted our first in 2009." Adds Frank, "Winemakers like the fruit coming off of these vineyards," although he admits that "some viticulturists have expressed concerns about these systems due to the higher number of pruning cuts and wounds exposed to fungal infections."

Also at this mechanization showcase was E. & J. Gallo Grower Outreach Specialist Keith Striegler, who lent this overall observation: “With mechanization, we’re not trying to replace labor, we’re trying to get the job done, because adequate manual labor won’t be there in the future. There is a lot of work being done on research and development with robotics, but that still has a long way to go.” 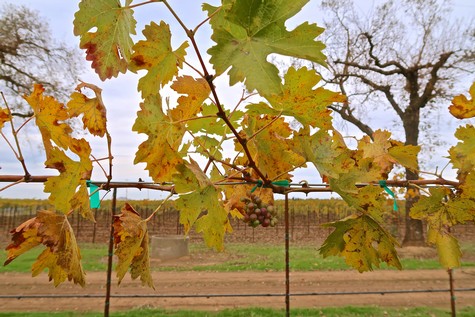 Where the cordons meet at the center of the single wires, a tiny cluster of second crop Cabernet Sauvignon in LangeTwins Family's Gill Creek Vineyard