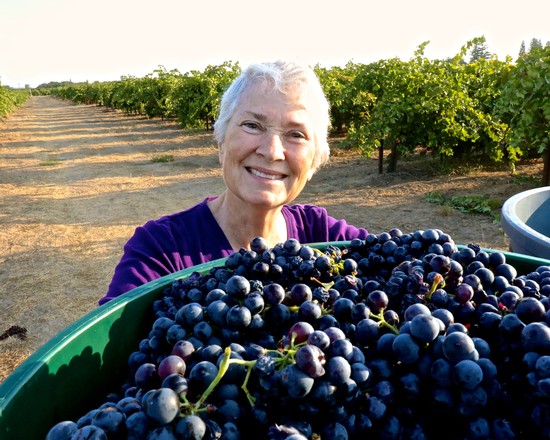 This past September 15, Tamara Maren with her Lodi Zinfandel picked by home winemakers from Los Angeles

In a little 8.5-acre vineyard home tucked into the west side of the Mokelumne River AVA, Lodi’s Tamara Maren is running a slightly different type of grape growing business.

It’s something more along the lines of the ecotourism concept, where visitors get to chance to enjoy an alternative experience of “Lodi.” In this case, the chance to pick grapes in Maren’s vineyard; make wine, break bread and raise a glass (or many) in amongst the vines and trees on her property.

Like many good things, Maren came into her concept somewhat serendipitously, although she’s been lovin’ it ever since. “It started when Robert Mondavi’s Woodbridge winery was sold to Constellation,” she tells us, in reference to an event that shook a lot of growers in the region back in 2005, when all of the sudden they found themselves dealing with a giant sized corporation rather than with people whom they’d known for years. This was especially true for Maren, who was once married to David Lucas, a former Robert Mondavi manager and owner of The Lucas Winery, located right next door to Maren’s property. 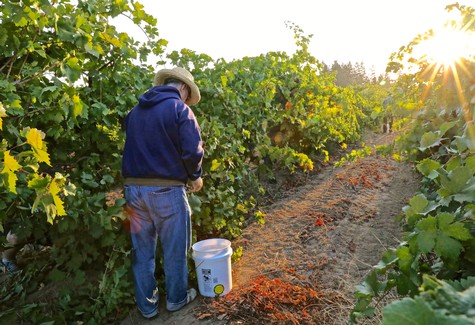 One of the Russian/Armenian contingent picking Tamara Maren's Zinfandel

Maren tells us: “David and I split about 25 years ago. He kept his ZinStar Vineyard (head trained old vine Zinfandel, originally planted in 1933), and I kept my eight and a half acres, which I replanted to trellised Chardonnay (4.7 acres) and Zinfandel, which can all be machine harvested. All the grapes were going to Mondavi, but after the sale the new company wasn’t exactly beating down my door for grapes. I’m too small-fry!

“When they finally got around to getting in touch with me, they said they’d take my Chardonnay, but weren’t interested in the Zinfandel. So I began contacting home winemaking associations in Sacramento, Stockton, and other places, including our local group, LAVA (Lodi Amateur Vintners Association). From the beginning I was able to get quite a few customers. I discovered that there’s a lot of people who want to make wine, but find the cost of grapes to be prohibitive. But if you give them the chance to pick the grapes themselves, it’s a lot more reasonable.” 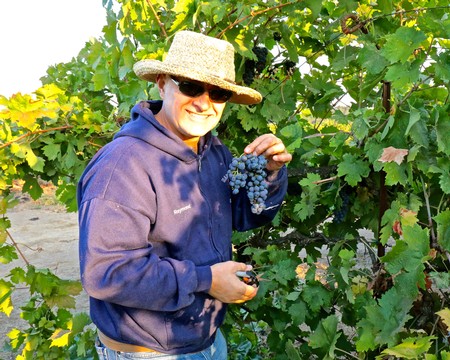 In the process of taking in wine lovers with the winemaking bug, Maren discovered another new thing: “I love my customers! Most of them stay overnight; either in a local hotel, or in one of my rooms. I can host as many as three couples at a time.

“Altogether, I host at least 20 to 25 groups of people each year – couples, friends, entire families. Most of them pick a half-ton to a ton each, enough to make 300, 400 gallons of wine. They bring in their own buckets and containers. They usually take the grapes home to crush in their garages, but sometimes they take off their shoes and start crushing the grapes with their feet right in the field.

“Two of my customers from the Bay Area, both lawyers, come out each year with their wives to pick a ton. They have won both gold and silver medals in amateur winemaking competitions with my grapes. Last year one of their daughters got married in the middle of harvest to an Australian, and 18 new family members from Australia showed up to pick!  The father of the bride bought 18 small plastic tubs, put several grapes bunches in each, and the new relatives crushed the grapes with their bare feet. Then they enjoyed sandwiches with lots of condiments and, of course, their award winning wine. Australians know how to have a good time!" 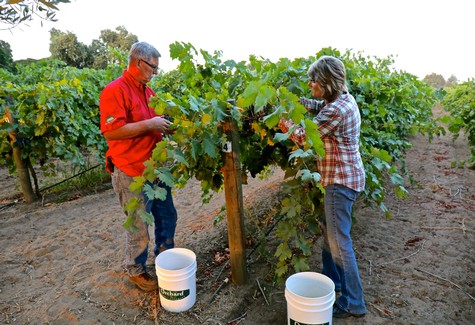 In Maren’s vineyard last week, we observed Greg and Carrie Dugovic picking their favorite row (marked "14") of Zinfandel, which they “claim” as their own each year. Said Ms. Dugovic: “This is our fourth year of picking. We drive out the night before from Turlock and stay overnight to get an early start. We first got hooked on winemaking after hearing about a winemaking course at Delicato winery on the radio, and then we heard about Tamara’s vineyard through an advertisement on the LAVA Web site.”

Adds Mr. Dugovic: “It’s never been just about the grapes. It’s also the human element – the people you get to talk to. Tamara is fantastic, and so are the other home winemakers we meet here. It’s also a great thing for just my wife and I to do and share together. The wine itself is like the icing. The first year, we just hoped it would be drinkable, and it was! Now we think we’re getting better, and we’ve even branched out to Sangiovese, Barbera, and a little Chardonnay.” 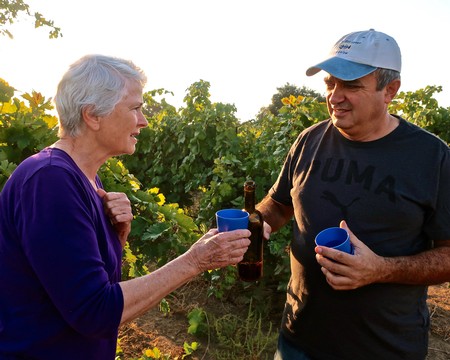 While watching a group of five Russian/Armenian men pick another row of Zinfandel, Ms. Maren told us: “The original three of ‘my Russians’ have been coming for seven years, and now two of their sons have joined in on the adventure. They come all the way up from Los Angeles. After picking, they always have a wonderful Armenian picnic, which I enjoy with them -- several kinds of bread, fresh cucumbers, home grown tomatoes, a selection of salamis (some homemade), good goat cheeses, and last year's wine.

“Another customer who has come for several years from Oakland brings enough Italian food to feed his friends who come along with him. He prides himself on raising much of his own food; including rabbits, ducks, chickens, and vegetables from an extensive garden. He also cures olives and makes pickles. His wife doesn’t like the heat, so she won't pick; but the first thing she does when she arrives is go into my kitchen, clears everything aside and starts to cook. Last year it was rabbit cacciatore, which I got to enjoy right along with them! 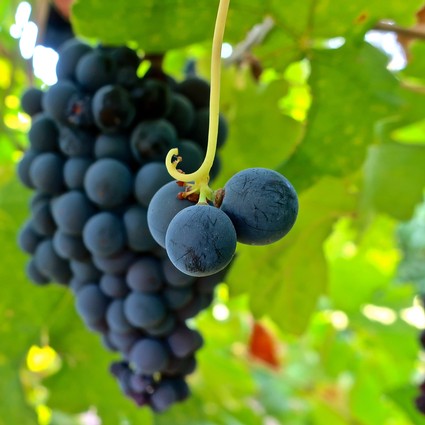 “Then there is my customer who is a recent emigrant from Serbia. He came by himself the first year, made wine, and the next year brought his wife and four relatives who also wanted to make wine. Few of them spoke English, but they indicated that picking grapes made them feel as if they were back in the old country. The following year they returned with even more relatives and friends. My original Serbian friend always brings me jars of honey that he makes from his own bees. They sometimes come back to pick my olive trees, which I always appreciate because it keeps the olives from falling on my driveway. I have no idea how many people will show up with him this year.”

“I enjoy everyone who comes here. They're a diverse group, and all are interesting. It reminds me of my youth when I lived overseas and traveled to many places, and met many people from all over the world. Now they all come to us in Lodi!” 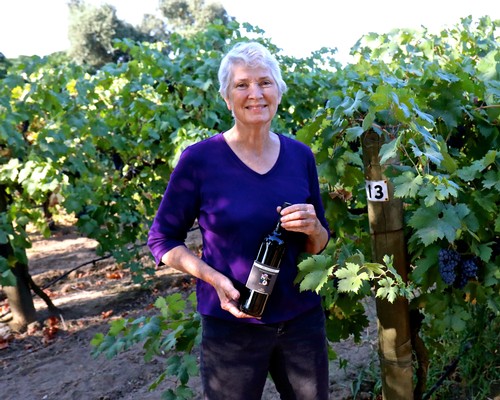 Tamara Maren with a bottle of homemade 2016 Dugovic Zinfandel