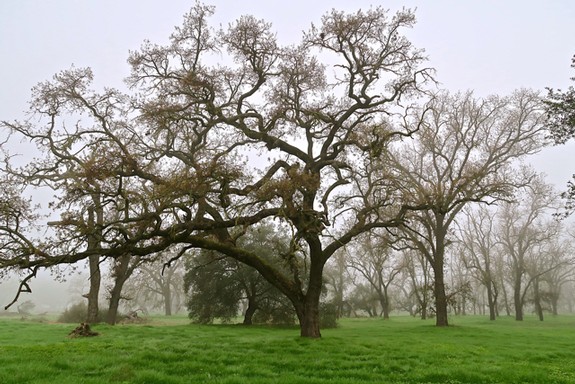 The same deep (50 to 90-ft.), rich sandy loam soil hospitable to deeply rooted valley oaks endemic to the Mokelumne-Cosumnes River Watershed (depicted here in the 32-acre grove preserved by the Spenker family of Lodi's Jessie's Grove estate) constitutes the terroir that made own-rooted European grapevines so easy to grow by Lodi's pioneering farmers in the mid-1800s

Part 2 of our discourse on Lodi terroir is for the technically minded wine geeks out there, looking for the no frills answer to the question: What are the physical factors of the Lodi AVA that have a direct impact on the "sense of place" found in more and more of Lodi's handcraft style wines, strongly influencing the decisions made by growers and vintners?

The land occupied by the Lodi appellation, of course, existed long before trappers encountered the native Plains Miwok tribe in the early 1800s; and before the first enterprising farmers of European descent began putting down roots towards the end of the 1840s. 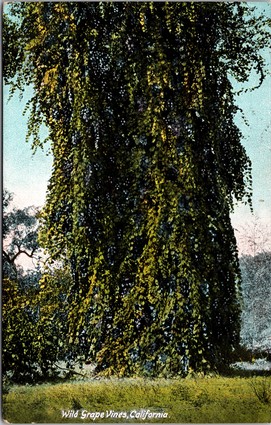 At the time, this unspoilt part of California's Central Valley — sandwiched between the Sacramento-San Joaquin River Delta directly to the west and the lower foothills of Sierra Nevada to the east — was a lush riparian environment, dominated by waterways fed by snowmelt and creeks in Sierra Nevada: the Cosumnes River and Deer Creek to the north, the Calaveras River and Bear Creek skirting the south, and the Mokelumne River and Dry Creek rolling through the middle.

During the early 1800s this watershed area was teeming with fish, beaver and waterbirds, grasslands on flat plains studded by valley oaks and blue oaks on terraces and lower lying hills, and home to squirrels, gophers, elk, black and grizzly bears, and the proverbial deer and antelope at play.

According to Ralph A. Clark's Lodi, grapes were part of the original landscape; albeit native varieties, "growing wild dangling from the trees along the riverbanks." In fact, the nearby Calaveras River was originally called "Wine Creek" by early trappers, due to the abundance of wild vines — something memorialized in nineteenth century postcards, and which you can still see today, growing along the banks of the rivers in the Lodi area.

This was the natural environment that farmers found so conducive to grapes of European or Mediterranean origin that it was a pink skinned grape called Flame Tokay that primarily accounted for the booming economy of the City of Lodi when it was incorporated in 1906. Wine grapes like Zinfandel and Alicante Bouschet enriched numerous Prohibition era grape packers such Cesare Mondavi (father of Robert and Peter Mondavi), and eventually made Lodi what it is today: easily America’s largest wine region in terms of both acreage and annual tonnage — hovering just over 100,000 acres of wine grapes, which is approximately as much as all of Napa Valley and Sonoma County combined, or all of Washington and Oregon plus another 30%. 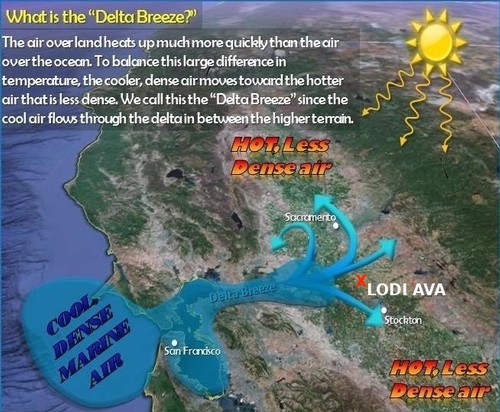 The driving factor that makes Lodi so conducive to grapes is, as with all classic wine regions of the world, its natural terroir. In the case of Lodi, this is defined by a Mediterranean climate: ultra-bright, dry, warm growing seasons moderated by chilly spring, summer and early autumn nights dipping into the 40°s or lower 50°s — conditions naturally conducive to the over 100 varieties of commercially grown Vitis vinifera (the family of wine grapes that originated in the Mediterranean Basin) now grown in the region.

The Lodi settlement, in fact was originally called Mokelumne, after the river (mokul is a corruption of the Miwok word for river, and umne means "people of") physically defining the watershed. The name was changed to Lodi in 1874 in order to avoid confusion with nearby communities with similar names (Mokelumne Hill and Mokelumne City).

The Lodi area rivers and creeks drain into the San Joaquin River when it dips into the lower elevation Delta area. The San Joaquin River meets with the Sacramento River just east of Suisun Bay, connecting with the Carquinez Strait draining into San Pablo Bay (the northern extension of San Francisco Bay).

The entire Sacramento-San Joaquin River Delta dates back approximately 10,000 years, when seismic activity drained the inland sea that once covered the entire San Joaquin Valley into the Pacific Ocean. With most of its elevation lying at least 15-ft. below sea level, the Delta area is the only break in the entire California Coast Ranges — thus exerting a huge impact on the climate of the farmlands surrounding the City of Lodi directly to the east. 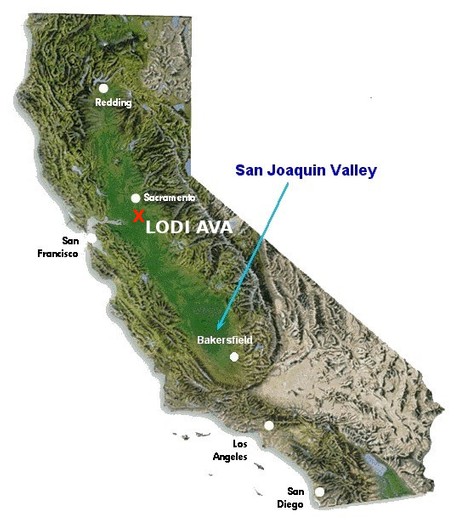 San Joaquin Valley Basin, once covered by an inland sea that drained through the gap created in the San Francisco Bay area by seismic activitity

Hence, the Lodi AVA is defined by its “Delta Breeze” climate, giving the appellation a Mediterranean climate that is very similar to much of the coastal wine regions of California (Sonoma County, Napa Valley, Livermore Valley, Paso Robles as well as much of Santa Barbara County are all classified as Mediterranean climate zones).

In the following 100-year snapshot, Lodi's average diurnal swings are compared to that of five other major California wine regions. While the highs and lows in Lodi are marginally higher than in regions closer to the coast, the appellations bearing the closest resemblance in terms of growing season temperatures are Napa Valley and Sonoma County: 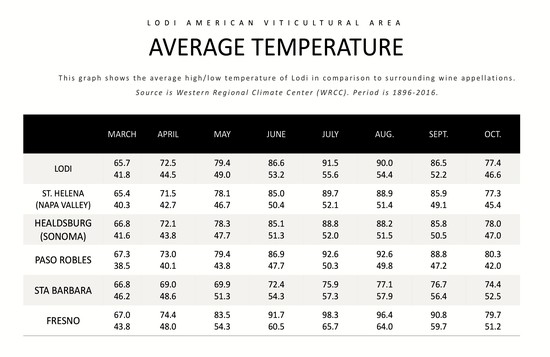 Temperatures alone, of course, do not describe any wine region's climate. In the winegrowing industry, the Winkler scale of growing degree-days is probably the most constantly cited way of defining climate zones. In his April 2015 paper entitled Spatial Analysis of Climate in Winegrape Growing Regions in the Western United States, Linfield University Research Climatologist Gregory V. Jones demonstrated the minimum as well as maximum degree-day readings of West Coast wine regions.

A snapshot of the GDD (i.e. Growing Degree Days) of some of the regions analyzed in Jones' study:

In Jones’ index, Lodi is predominantly and consistently a Region IV, while falling in the lower range of Region V just 22% of the time, despite being such a large winegrowing region.

By comparison, Napa Valley’s 43,000 or so acres of wine grapes are planted in no less than five different degree-day classifications, ranging from cool Region I to hot Region V. Napa Valley is a prime example of what Jones calls a “spatial variability.” Writes Jones, the Napa Valley AVA "reveals that it is predominantly Region III (56%) and Region IV (30%).” Jones’ research also finds that Paso Robles (about 40,000 planted acres) “spans three Winkler regions... Region II, III and IV (14%, 49% and 37% respectively).” In comparison, the much warmer Madera AVA (about 38,000 acres of wine grapes) “is largely a hot climate type... a Region V in GDD (100%).”

Hence, in the original Federal Register document submitted for the Lodi AVA in 1982, a summary of the region's major climatic influence is borrowed from a 1937 USDA Soil Survey of the Lodi Area, saying: "Owing to its location opposite the wind gap leading inland from the Golden Gate, the range in temperature is narrower than in more northerly and southerly parts of the great valley (i.e. Central Valley)."

To be continued: Strong case for Lodi terroir (part 3) - soil and topography 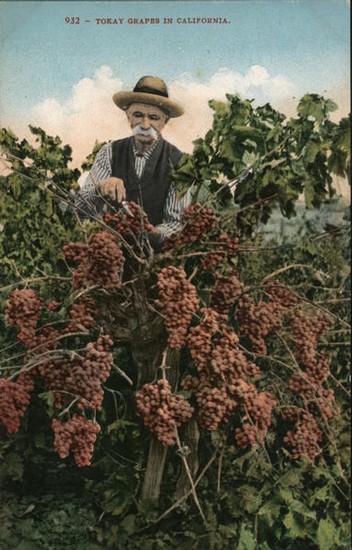 Colorized early 1900s photo of harvesting of Lodi's Flame Tokay grape, the economic backbone of the region during the turn of the last century