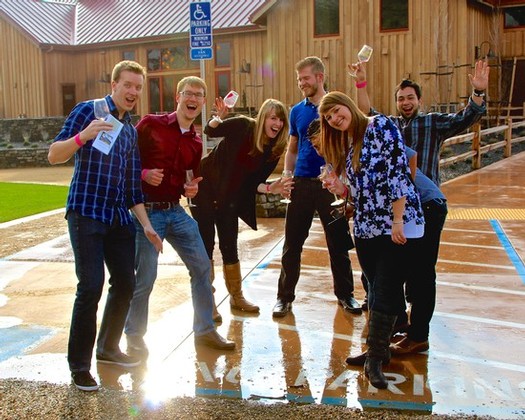 If you are a wine lover between 30 and 38, there is now a target on your back.

But congratulations, because you are now officially the largest and most important age group to wine producers, who are scrambling to adjust their marketing as well as products to suit your preferences as we speak.

At least according to the latest study (results from a 2015 online survey conducted in all 50 states) on “Wine Generations”: a 9-page report published in the current issue of Vineyard & Winery Management (Jan.-Feb. 2016) by Dr. Liz Thach MW and Dr. Kathryn Chang, Professors of Management and Wine Business at Sonoma State University.

30 to 38-year old wine lovers, of course, are part of the Millennial generation. Thach and Chang distinguish this group, which they call “Older Millennial,” from what they call “Younger Millennial,” aged 21-29. In an October 2015 Beverage Media Group interview, Dr. Thach is quoted to say: “The oldest Millennial is now 38 and is able to spend more money on wine. Those who are in their twenties, still in college or struggling with the post-recession economy, are more likely to be attracted to innovative packaging like wine in cans, pouches or boxes. Older Millennials are getting deeper into wine, can afford to spend more, and it’s this group that more traditional wineries are reaching out to, through social media and also wine clubs and events.”

Why Older Millennials? According to the Sonoma State University survey, both Boomers (aged 51-69) and Older Millennials are now shown to drink more wine. That frequency broken down by generations:

This is not to ignore the “Swing Generation" (aged 70-82); but as the old adage goes, the older you get, the more you can spend on wine – until health reasons prevent you from doing so. And besides, while aging, this pre-Boomer generation has always been a thriftier lot.

While there are currently about 77 million Boomer Americans, compared to 70 million Americans in the Younger and Older Millennial generation, the Older Millennials are now considered the most significant wine consumers because of the higher daily frequency of their consumption. Plus the fact that Boomers are, after all, getting older, and will soon begin to restrict their wine consumption even further.

In her own Wine Stars blog, Dr. Thach advises the wine industry on how to appeal to Older Millennials by stating: “This generation appears to be highly engaged in wine and is willing to pay more for it. What may be challenging is that fact that they know so much and are very technology savvy. Wine marketers need to learn how to connect with this cohort across promotion channels, but especially online. Both innovative and intellectual methods are necessary to keep this group engaged with a brand.”

In their survey, Thach and Chang also polled wine consumers on their preferences. They found that red wine – particularly varietal bottlings of Merlot, Pinot Noir and Cabernet Sauvignon – was preferred by all four major generational groups, with little significant difference among them. Both Millennial groups prefer white wines just as much or more than they do red wines; whereas Gen Xers and Boomers prefer red wines slightly more than they do whites. 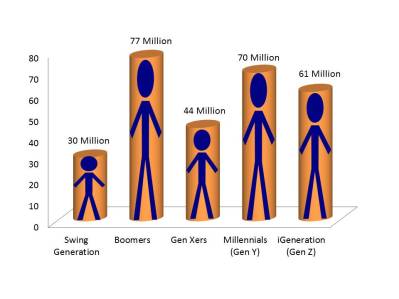 However, according to the Vineyard & Winery Management article, “Younger and Older Millennials scored significantly higher on preferring sweet and fruity wines, compared to Gen Xers and Boomers.” Boomers scored the highest on preferring dry wines, which “supports other research showing that as wine consumers age they gradually begin to prefer drier wines.”

Another unique aspect of the Older Millennial group is that they are not exactly humble. More than other age groups, they rated their own wine knowledge as being significantly higher than that of other generations – at a “Connoisseur” level. Whereas more than half of the other groups rated their wine knowledge as “Intermediate” – meaning, they “know the basics about wine.”

Older Millennials are also more adventurous. When asked about whether they agree with statements like “I think it is fun to try out new wines I’m not familiar with” and “I like to try the most unusual wines, even if I’m not sure I will like them,” both Millennial groups indicated that they are the most likely to try new wines. Gen Xers scored lower than Millennials, but higher than Boomers, when it comes to interest in new wines.

When polled on their willingness to spend more on wines – $20-$25 and over $25 for bottles – both Older and Younger Millennials exhibited significantly greater willingness to splurge than both Boomers and Gen Xers. According to Thach and Chang, “This supports recent Wine Market Council findings showing that though Boomers purchase more wine, Millennials are willing to pay more per bottle.” 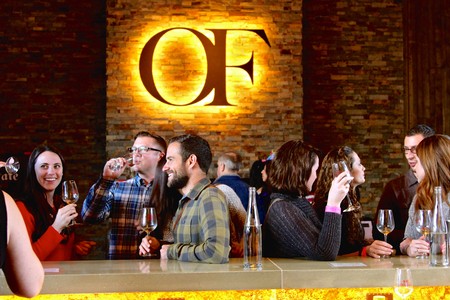 Most older Millennials view their wine knowledge as "Connoisseur"  level

When it comes to social media (especially Facebook), it may not be surprising to find that Older Millennials discuss wine – as well as garner information about wine, pricing, and recommendations from friends – the most frequently in such platforms, and, and that Boomers use social media the least among the age groups.

Observations of wine marketers can also be useful in gauging the overall preferences of groups such as Millennials; even if based more upon either anecdotal experience or sales pertaining to their own particular brands. In the recent Beverage Media Group report, for instance, Stephanie Gallo (E. & J. Gallo’s Vice President of Marketing) comments: “Millennials are fueling the growth of the wine category and their behaviors are dramatically different than their predecessors. They don’t adhere to traditional wine rules. They are adventurous when it comes to what they will try and purchase for themselves, their friends and their family. They appreciate innovation – particularly if it simplifies or eliminates routine challenges.”

J.J. Williams, a third generation family owner of Washington’s Kiona Vineyards & Winery, adds these thoughts: “Millennials want to know where things come from. Being able to connect with the winemaker in the tasting room, things like that, make a big difference in the type of relationship a winery can build with Millennial consumers, and it is something they are more likely to take advantage of than that older consumer.”

Also, quoting from the Beverage Media Group, “Millennials don’t care about wine scores, no matter who awards them." According to Williams, who has been monitoring response to their own posted scores, “We find it’s almost never someone who looks like they are under 30... they place more value on what their peers say, rather than old-school critics and pundits.” 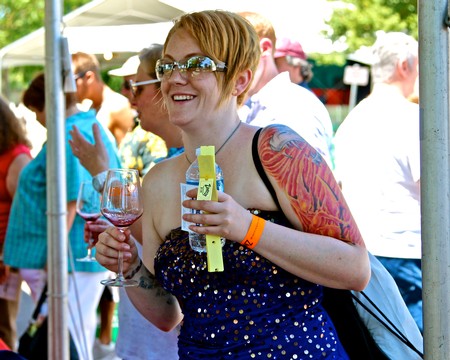 What does all this mean for Lodi’s own growers and wineries? Our advisory:

• Gen Xers and Boomers between the ages of 39 and 69 are still important, but at this time it is even wiser to make plans to grow grapes and produce wines appealing particularly to 21-38-year-old Millennials; especially as Boomers start to cut down on their wine consumption.

• What we keep hearing over and over again is the word “new.” Millennials’ willingness to experience new wines, or wines from different, innovative or adventurous grapes, are no longer incidental occurrences – it is becoming a preference. Stick to the “same ol’s” at your own peril.

• The fact that both Millennial groups are technology and internet savvy, plus the fact that they do not pay as much attention to mainstream wine media, just means there is a great opportunity to communicate with them directly. They want to learn more, and you won’t be able to compete unless you are able to establish and maintain that immediate contact. 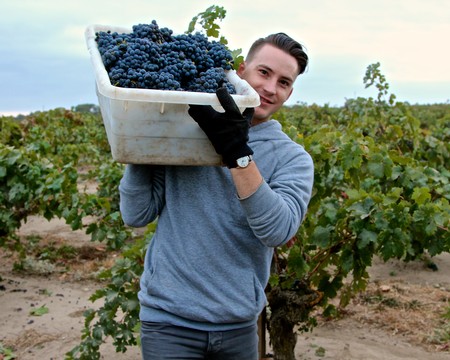 Millennials are now a dominant percentage of the sommelier trade

• Millennials’ willingness to spend more on a bottle of wine than previous generations only reinforces the need to focus more on quality in order to meet their needs.

• It has never been a good idea to underestimate the intelligence, capacity or spending power of consumers, and Millennials more so than other generations. They learn fast, think for themselves, and in fact, 30-somethings already believe they know more about wine than anybody. So if you insult them or sell them short, you only short yourself.

• There is an “iGeneration” coming up behind Younger Millennials – kids now between the ages of 6 to 20. This generation, of course, is maturing in the age of iPhones and Minecraft; thus wired in different, perhaps more intricate ways. Since the Lodi wine industry has always involved long term, multi-generational planning – more so than in other wine regions – it is certainly not too early to think ahead about the iGens! 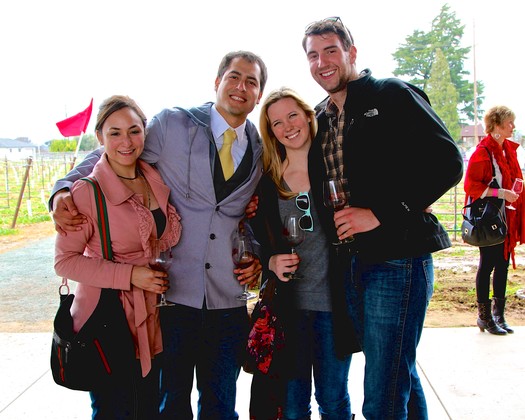