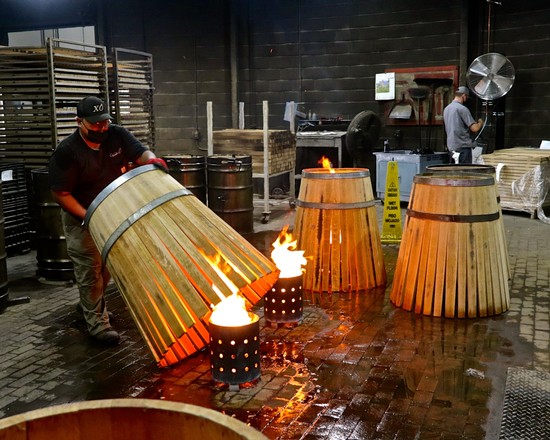 Slow and patient barrel-aging (vs. shortcuts)

This is an article about oak barrels. When and where the notion of aging wine in artfully bent staves of oak first started, and how it's done — or not really done — today.

What do we mean by "not really done"? Most of the world's finest wines are still aged in oak barrels. It's a centuries-long tradition. Many of the finest wines are also fermented in oak barrels, which is known to achieve even more harmonious sensory qualities associated with use of oak barrels. Generally speaking, both red and white wines can be improved by oak aging because the porous nature of a barrel allows for oxygenation, as well as a little evaporation and concentration, of wines during the course of several months or often over a year, and even as a result of more than two or three years of being kept in a barrel. 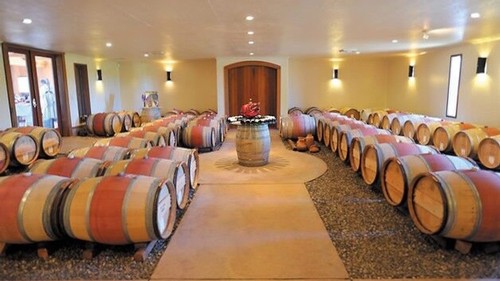 During the barrel aging process wines also have a way of picking up oak-derived aromas, which translate into flavors on the palate, that are similar to the taste of vanilla, which can "sweeten" the taste of a wine (like adding vanilla extract to your sugarless whipping cream); and because wine barrels also go through a "toasting" process while they are constructed — when oak staves are bent into a barrel's typically rounded shape over an open fire, thereby charring the insides of the wood — barrel aging also adds some degree of toastiness, char or smokiness to the taste of a wine, thereby adding another attractive dimension. There's something about the smell of oak, like walking into a winery's barrel room, that sets the hearts of wine lovers aflutter.

Many of today's commercial wines, however, skip the actual barrel aging process altogether. Instead, they are produced entirely in stainless steel tanks; but to achieve a flavor that replicates traditional barrel-aging, oak chips bundled in food-grade mesh bags are commonly dipped into the tanks. Another "oak alternative" process is to utilize various sizes of oak staves. To duplicate the taste of a toasted barrel, both chips and staves can be toasted over fires at varying degrees (the typical grades sold to wineries by cooperages include "blonde," or barely toasted, "medium," "medium slow," "medium plus," or "heavy" for the darkest toasting). 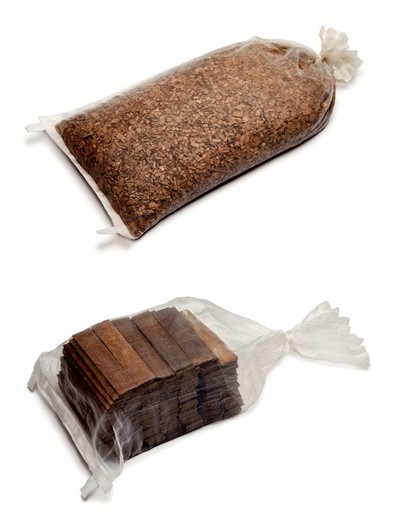 Examples of oak chips and staves (the latter below, sold as shorter "bricks") in food-grade mesh bags used by wineries to duplicate oak-derived flavors without aging wine in actual barrels. Images courtesy of Tonnellerie Ô.

This is how wines can be produced with the oak-derived "complexity" similar to barrel aging, but at a fraction of the cost of wines aged in actual barrels. There are now, in fact, numerous winery facilities built for as much as half-million or million-plus-case yearly productions of "classic" wines like Cabernet Sauvignon and Chardonnay, with not an oak barrel in sight!

It is now widely understood in the wine industry that virtually no bottle selling for less than $12 in the U.S. today has actually seen the insides of a barrel. With the crafty use of oak amendments or adjuncts, they may have a smoky/vanillin taste similar to a barrel-aged wine. They may even have a smoothness or roundness of texture recalling wines that have undergone the slow, patient process of oxygenation in oak barrels. But, ultimately, are they as good as an actual barrel-aged wine? For most wine lovers with a somewhat descriminating taste, the answer would probably be "no." Then again, what do you want for $8, $9 or $10? 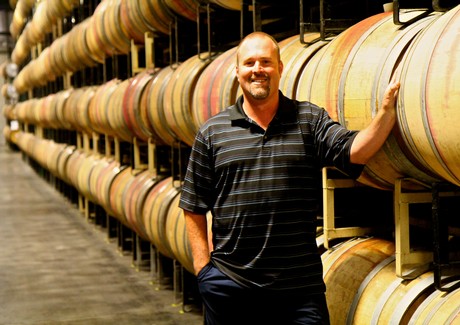 A Lodi winery that does not compromise on barrels

There are family wineries and there are family wineries. Michael David Winery — owned by the Phillips family, who have been farming in the Lodi region since the late 1860s — is currently producing over 600,000 cases of wine a year (according to Wine Business Monthly's article on the WBM 50, February 2021). Their wines are are sold in every state of the union, and in virtually every other country in the world where wine is consumed.

A lot of Michael David Winery's success is due to marketing savvy. Their imaginative, colorful labels certainly stand out on store shelves. But as any wine lover will also tell you, the wines inside the bottles also have to be eminently appealing. Especially since, unlike the giant "jug" wine producers, the Phillips family does not compete in the value-priced, minus-$10 or $12 market (the price points of more than half the wines sold in the U.S.). Their current biggest brand, sold as Freakshow, retails for $19 to $22 across the country. In a recent Zoom meeting with wine professionals in Russia, I learned that Freakshow wines sell for $35, yet are still among the top selling of all American imports in that country. Russians love the taste of Freakshows.

Yes, of course we're going to say that most of the quality of Michael David wines making them immensely popular can be attributed to the Lodi Viticultural Area, where you can naturally grow wines with vivid, fresh fruit profiles, packaged in soft, round, consumer-friendly palate-feels. But Michael David Winery is not the only family winery in Lodi. Make no mistake, much of the Phillips family's success is also attributable to the sheer quality of their wines, and a lot of that has to do with their commitment to the quaint, old fashioned idea of aging wines in oak barrels. They're stubborn about that.

In a conversation a few years ago, Michael David Winery's head winemaker Adam Mettler made no bones about why wines like their Earthquake Zinfandel ($26), Inkblot Cabernet Franc ($30) and Rapture Cabernet Sauvignon ($59) have been critically acclaimed best sellers. According to Mettler: "There are no secrets. But a major reason why, for example, our Earthquake reds have been getting better and better each year is because we have been shifting to more high-end oak, all French, based upon our extensive oak trials. The idea is not to make an oaky tasting wine, but a wine that has more elegance in the nose; a cleaner, sweeter vanilla, and higher toast that highlights the fruit without overshadowing it." 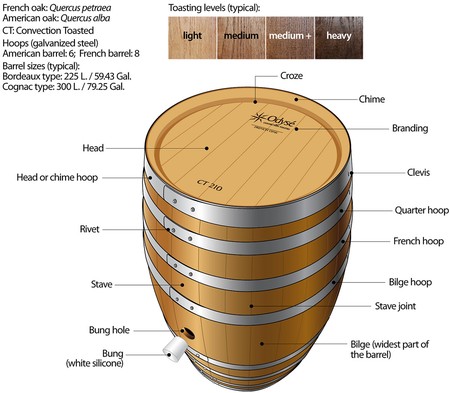 Michael David's program of "not-more-but-better-oak" is, in fact, staggeringly complicated. In their temperature controlled barrel rooms, the winery currently lodges over 13,000 barrels; and they buy at least 2,000 new barrels each year, costing anywhere from $900 to $1,400 apiece (you do the math). For instance, all of the barrels used in their $26 Earthquake program (which also includes a Petite Sirah and Cabernet Sauvignon) are coopered from white oak trees grown in select forests in France. For their lowest priced wines ($15-$18), Michael David also supplements their French oak program with some American oak barrels (about a third of their barrels), and a small portion from Hungary (maybe about 1%).

Point being: Michael David Winery does not scrimp on oak quality, or by utilizing oak amendments like chips and staves, dipped into tanks like tea bags. They believe that traditional barrel aging is the best way to play up the natural, Lodi-grown fruit qualities in their wines, and to achieve the aromatic and textural complexities that are truly compelling to consumers. 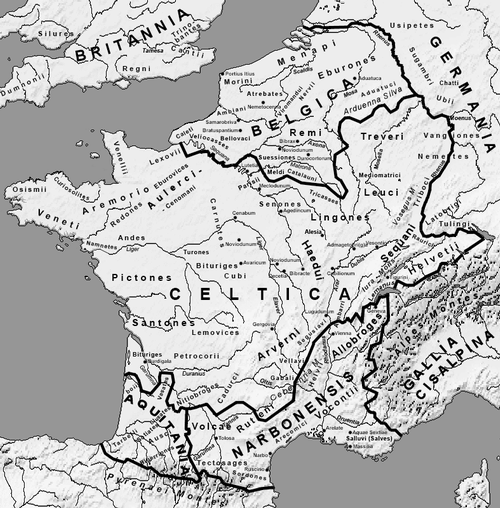 Map of Gallia (ancient Gaul) and its five parts right around 60 BC, just before it was divided and conquered by Caesar, which included Gallia Cisalpina (where north-west Italy is today), Gallia Narbonensis, Gallia Aquitania, Gallia Celtica and Gallia Belgica — notwithstanding the old Latin lesson sentence, “Gallia est omnis divisa in partes tres” (“All Gaul is divided into three parts”). Wikipedia.

While viticulture and winemaking has been traced back to the ancient Greeks (most likely as early as 10,000 BC), Phoenicians (spreading their wine culture throughout the Mediterranean by 1,550 BC) and Etruscans (starting around 950 BC), in all likelihood it was the Romans who first made use of barrels to store wine, probably when they first encountered native tribes of Gaul and Germania — a long period of time (390 to 50 BC) when these populations were either at war or doing business, trading in such things as wine, beer and mead.

The Romans' original means of storing and transporting wine was in long ceramic or terracotta vessels called amphorae. The Gallic and Germanic tribes, however, utilized barrels made from white oak trees native to the forests throughout Northern Europe to store their beer or mead (although the wine culture that eventually evolved in France and Germany was based upon indigenous grapes, there is no evidence that the ancient Gauls and Germans became interested in wine as a beverage until they began trading with either the Etruscans, Phoenicians, Greeks or Romans, probably after 425 BC). 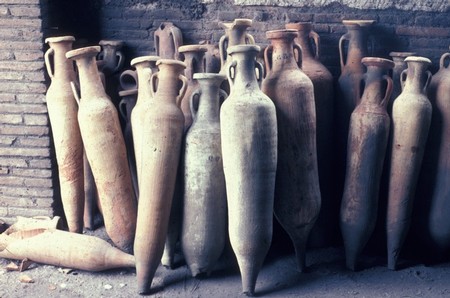 Although he was writing around AD 50 to 79, the Roman historian Pliny the Elder remarked that the practice of storing beverages in rounded, wooden casks bound by hoops came from Gaul, where coopers — professionals who specialized in the crafting of wooden implements, from tubs to casks of all shapes and sizes — plied a trade of longstanding, multi-generational tradition.

The advantages of barrels over amphorae were multiple: They were sturdier and could hold greater volumes, be stored and transported more easily, yet could be rolled from place to place by a single person. Eventually — by around the 17th century when winemaking in France, Spain, Italy and Germany became more of an exacting science and art — vintners also learned that aging wine in barrels could substantially improve the quality of wine. Since, for Ancient Romans, wine was a democratic, everyday beverage — Roman troops were supplied with daily rations as part of their pay, and well over 100 wine bars (called popinae) were buried in Pompeii in AD 79 — wooden barrels became a practicality, and coopering a Roman trade as well. 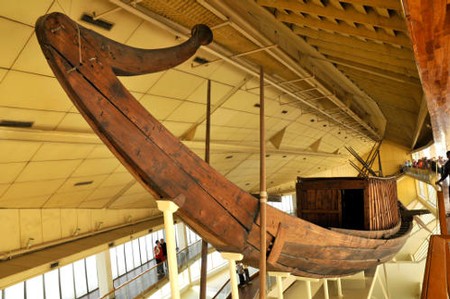 The approximately 4,500-year-old, exquisitely coopered cedarwood Khufu ship uncovered at the foot of the Great Pyramid of Giza. express.co.uk.

Coopering itself probably goes back as far as when people first mastered the craft of bending damp staves over fire to shape and bind wood, in order to build seaworthy ships and household containers. There is, for example, an entirely intact, gracefully curved ship crafted from cedar unearthed from the Great Pyramid of Giza, dating back to the reign of King Khufu around 2,500 BC. An Egyptian wall-painting in the tomb of Hesy-Ra, dated back to 2,600 BC, shows a wooden tub carrying wheat. Another Egyptian painting, from 2,900 BC, shows what appears to be a cooper with a wooden tub and grapes.

Barrels and casks, of course, were not just used to carry alcoholic beverages. They were also used for fish, meat, tallow, nails, paint, honey, butter, rainwater, and later, gunpowder, tea, whale oil, olive oil, corn syrup, and whatever else needed to be stored in watertight containers. Coopering is an ancient craft, as valuable today as it ever was before.

Our next blog post: Oak barrels, part 2 — historical usage up until modern times 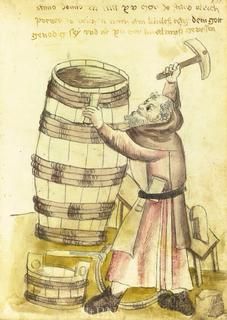 Medieval depiction of a cooper with a barrel and tub