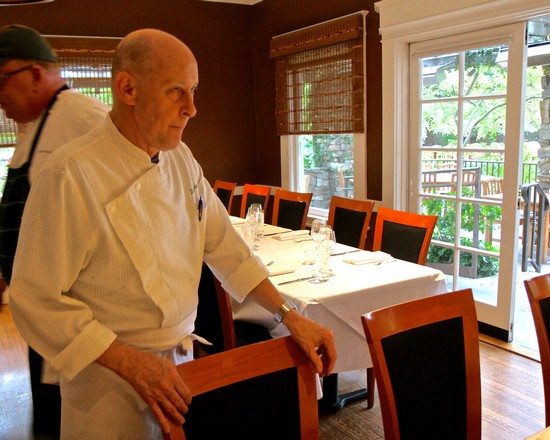 “A Light exists in Spring,” wrote Emily Dickenson, “Not present on the Year, At any other period...”

Although these exact words – expressing the radical changes felt all the way down to the bones when April flowers, and even showers, awaken spirits and senses – may not have been on the minds of the 28 people gathered this past Wednesday (April 5, 2017) in Wine & Roses Hotel’s Towne House Restaurant, our earth did seem to tilt, ever so slightly.

The event was a 6 course/6 wine spring themed celebration prepared by the celebrated Chef Bradley Ogden; where a heady Dickensonian joy was tasted in each nibble and sip, and the sense of clarity, promise and hope often associated with the early days of the vernal equinox permeated the air. 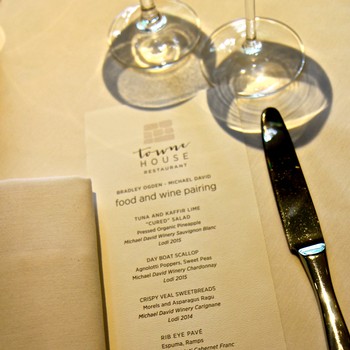 The wine part of the equation was supplied by the multitudinous-award wines of Lodi’s Michael David Winery, which were matched with each of Chef Ogden’s courses. Michael David Co-Owner/President David Philips, and his wife Corene, were there to enhance the experience.

In greeting her guests, Towne House Restaurant Manager Tricia Maley introduced Chef Ogden to her guests by stating, “Bradley is one of California’s culinary pioneers, and one of the originators of the idea of farm-to-table cooking.”

One could say far, far more, of course, about Chef Ogden’s rare talents, beginning with a seemingly endless list of accomplishments – topped off by peer-accorded James Beard Foundation Awards (as a Chef as well as for his landmark Bay Area restaurants, Lark Creek Inn and One Market). 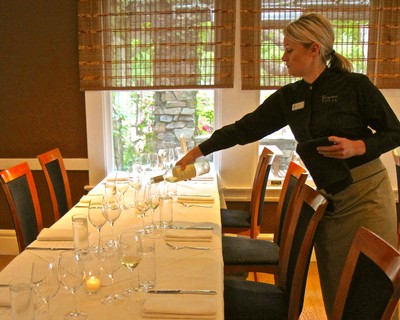 Exactly what has this iconic chef been up to in Lodi wine country? Explains Wine & Roses Hotel Proprietor Kathy Munson, “Brad has been working with us over the past six months as our Consulting Chef. It is an indefinite arrangement. The connection was originally made through John (Town House Restaurant Executive Chef John Hitchcock), who worked for Brad for over five years.

“What’s amazing is that Brad doesn’t just advise us on our operations, our training and development. He comes in 5 days a week and works with the entire staff on everything, down to every last detail. He inspires our kids, and they just love him.”

Adds Co-Proprietor Russ Munson, “In a word, Bradley elevates us. We want to become better known as a wine country destination, and he has been working closely with us, showing the ways we can accomplish that.” 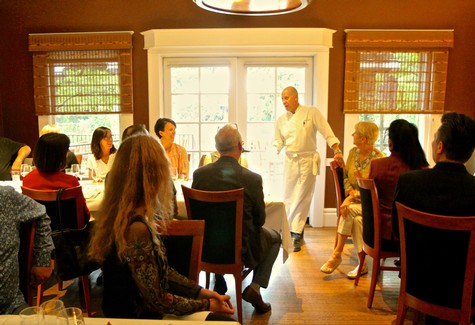 Chef Ogden’s own most quoted description of the approach to cooking he has helped foster: “Keep it simple; use the freshest ingredients available and put them together in such a way that the flavors, colors and textures combine to bring out the best in each other.”

When asked how he feels about working with Lodi’s regional foodstuffs and wines, Chef Ogden proffered this perspective: “Lodi reminds me of the way wine regions like Sonoma and Napa were like when I first came to California in the early ‘80s. Back then, there was a sense that we had everything we need at our fingertips – the best and freshest ingredients, the finest wines made from the best grapes – and all we had to do is take advantage of it. Lodi has all of that, and it’s just a matter of bringing it further out into the open. You’ve got to build a food and wine culture – and, as they say, they will come!” 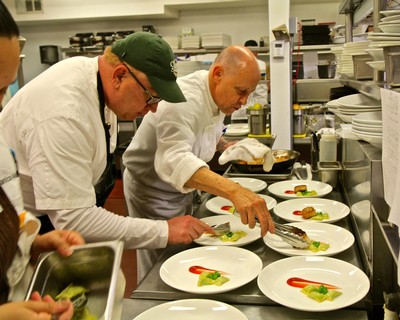 That said, a course-by-course accounting of this memorable affair:

Chef Ogden described this opening course as, “Sort of like my version of tuna poke, except I marinate tuna in kaffir lime, and serve with purées of guava and passion fruit, organic pineapple pressed with tequila, organic mango relish and micro-cilantro.” This exhilarating gelling of tropical sensations proved positively sensational with Michael David’s bone dry yet tropical-scented (passion fruit with white and violet flowers), crisp and airy Sauvignon Blanc. 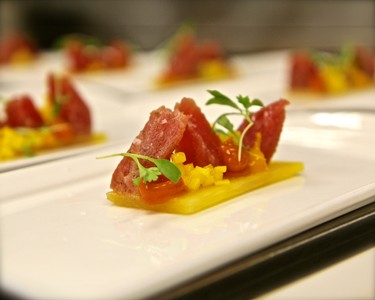 Chef Ogden's version of "tuna poke," riding in on a miniature "surfboard" of organic pineapple

The herby, lemon nuanced and mascarpone filled agnolotti (miniature stuffed pasta) served like dreamy pillows nestling the fresh, dry packed Maine scallop, along with sautéed pea tendrils and a zingy fresh red pepper/carrot purée that Chef Ogden underplays by calling it “my secret ketchup.” While creamy as opposed to crisp in texture, the Michael David Chardonnay’s emphasis on floral/citrusy fruit (the wine is only partially barrel fermented) was just bright enough to underscore the sense of spring freshness and clarity in this dish. 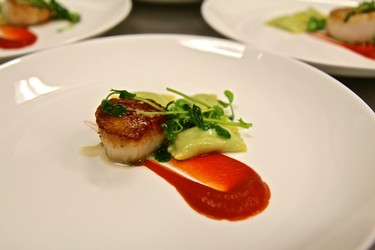 “Veal sweetbreads is one of my favorite ideas for spring,” Chef Ogden told us. “We served it a lot at Campton Place (the Union Square/San Francisco hotel where Ogden presided between 1983 and 1989), and here we give it a spring touch with Delta asparagus and morel mushrooms, which now cost us $25/lb. – to think, we used to pick it ourselves back in Maine.” As it were, this course achieved the “seamless match” Chef Ogden alluded to when describing the construction of his dishes: the asparagus and morels adding high and low organic elements to the succulent, pan crisped white meat of the sweetbreads; mirroring similar contrasting sensations in the Michael David Carignane, which combines the effusive cherry perfume (making it very Pinot Noir-like) with subtle herby/earthy undertones (very “Lodi”) in the nose as well as a soft yet zesty, bouncy palate feel. 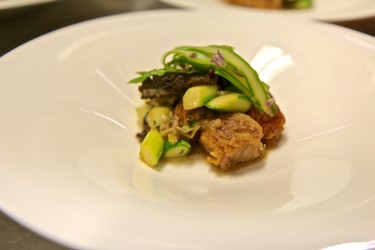 Breaths of spring: pan crisped sweetbreads with asparagus and morels

Chef Ogden’s “Ravé” is a sliced, rare roast of the rib eye served with what he calls “my version of steak sauce” – an nth-degree reduction of red wine (“it takes 4 bottles to make 1 cup,” according to Ogden) with a touch of “balsamic and hard apple.” Ogden’s other secret ingredient is an instant soaking of the beef in a butter reduced with the red wine essence – invisible on the plate, but hugely intense on the palate – which is intensified even further by a serving of buttery ramps, the wild onion greens that have become a spring ritual in restaurants that make a fetish out of seasonal cooking. Michael David’s ultra-concentrated, violet/raspberry scented and velvet textured Cabernet Franc served as a perfect foil for Chef Ogden’s culinary tour de force. 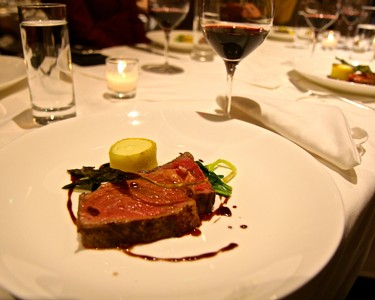 While on paper, Cowgirl’s classic triple-cream style soft ripened cheese, sourced from West Marin dairy farms, is not an ideal match for sturdier California Cabernet Sauvignons, there is just enough roundness and smooth layering of cedary/cassis/blackberryish fruit in Michael David’s Lodi grown Rapture – and tinge of twiggy herbiness in the whitewash colored rind of the Mt. Tam – to forge some common ground for the palate to enjoy both cheese and wine together. In other words, if the wine was a chewy, high tannin Cabernet Sauvignon typical of, say, Napa Valley, the creaminess of the Mt. Tam would have only exacerbated the bitterness in the tannin. Instead, this turned out to be a case in which the typically soft character of Lodi Cabernet Sauvignon becomes a plus, rather than a disadvantage. 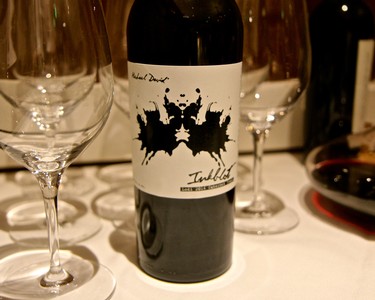 There was just enough residual sugar in Michael David’s medium-sweet Symphony – a white wine grape crossing of flowery/perfumey Muscat of Alexandria and fleshy textured Grenache Gris, which the Philips family pioneered in Lodi – to highlight the spring-airy lightness of Chef Ogden’s strawberry soufflé. A refreshing finish to this amazing dinner; giving us a glimmer (or, A Light exists in Spring) of what may soon evolve into a full-fledged culinary culture distinct to Lodi wine country! 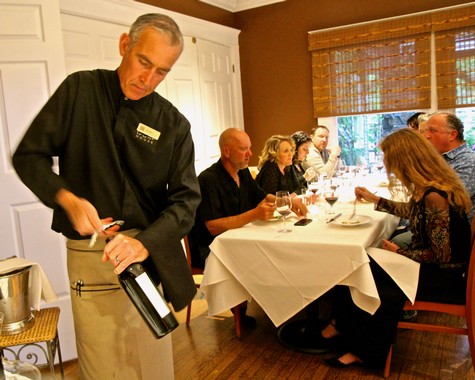 Another moment of truth: opening of Michael David's Rapture 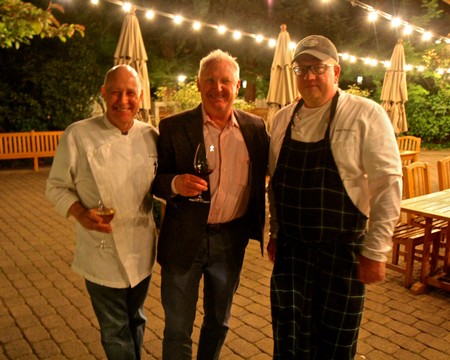 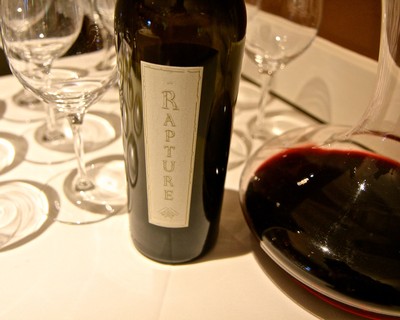 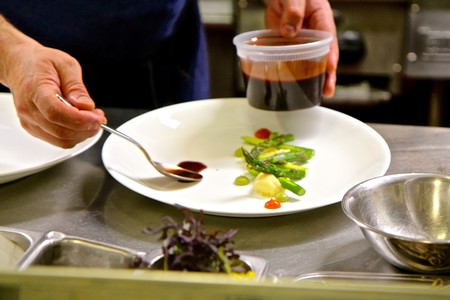 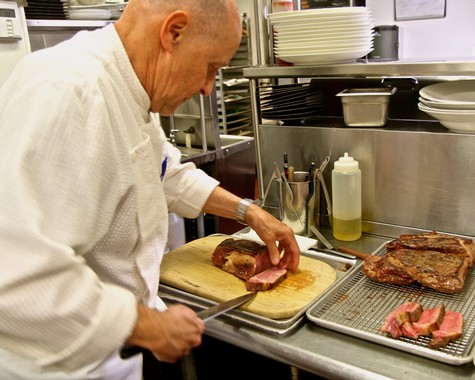 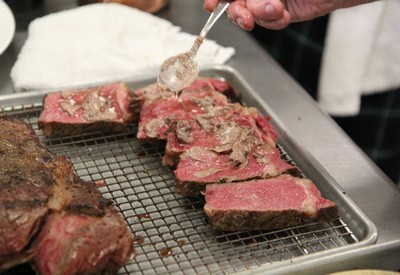 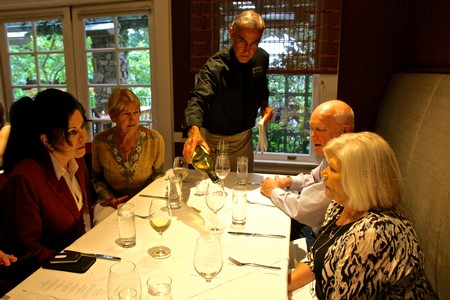 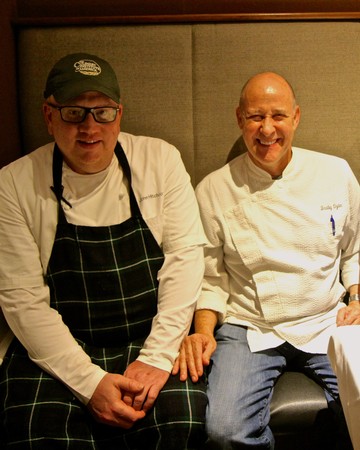 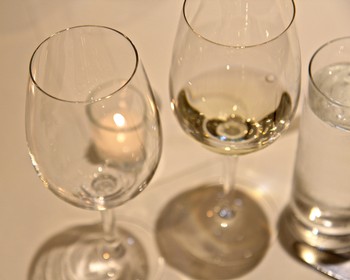