What six visiting wine influencers are saying about Lodi 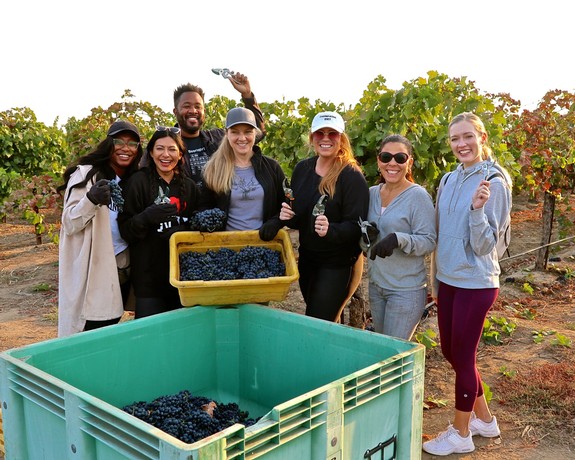 Sometimes it helps to ask someone what they think moments after their experience. Said one of the influencers, L.A.'s Elle Rodriguez, in a video/message transmitted while waiting to leave at Sacramento International Airport: “Omigosh, I'm shocked... Lodi is such a gem."

Upon further thought, Rodriguez added: "Lodi has all the right vibes. If you are into good people, great wine, authentic experiences, this is the place for you. It’s not at all corporate. The winemakers are hands-on. You see stains under their fingernails and an absence of Rolexes. If this sounds like your kind of experience, come to Lodi before the word gets out." 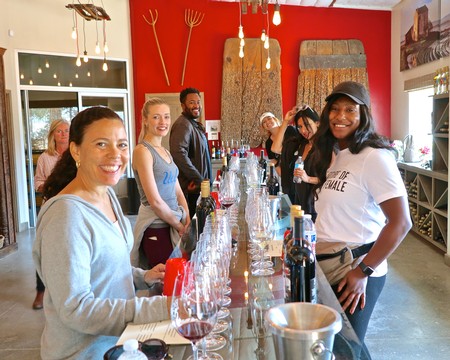 Before their trip, the six wine influencers were polled about what they wanted to experience in Lodi wine country. The group responded that they wanted to do what just about all first-time trade or industry people want to do when they visit Lodi: look at old vines, do a lot of tastings (including blind tastings, since wine professionals love to challenge themselves), and meet the people behind the vines and wines.

So that's exactly what they did when they weren't partaking in local victuals served at places like Guantonios Wood Oven and Pietro's Trattoria, or at a classic multi-course winery dinner featuring the "Women of Lodi" and the innovative cooking of catering chef Daniel Cortez of Ignis Provisions. 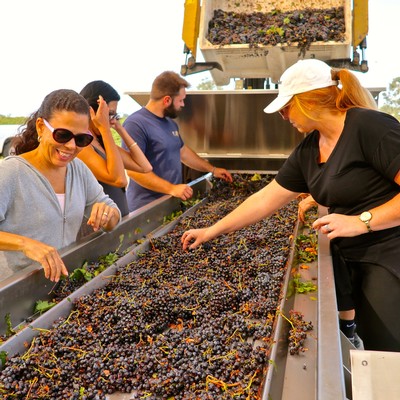 First question, perhaps, for many of our lodiwine.com readers: What is a "wine influencer," and why do they matter? Answer: Wine influencers are exactly that — people who influence other people, what they drink, how they look at things like wine, or the endless occasions to enjoy wine. Only, the difference between today's wine influencers and conventional wine media — by "conventional," meaning those who get their thoughts and opinions out through print magazines, websites or through online blogs (whether or not "blogging" is now passé is an entirely different subject matter) — is that wine influencers are pretty much an Instagram phenomenon.

That wine appreciation has taken to Instagram like fish to water should be no surprise. The experience of wine, after all, is as much a visceral or sensory activity as it is an intellectual one. Our senses of smell and taste are very much connected to our sense of sight. Visual experiences of wine, which is what Instagram is all about, are as compelling (or more compelling, for many wine lovers) as reading about it. 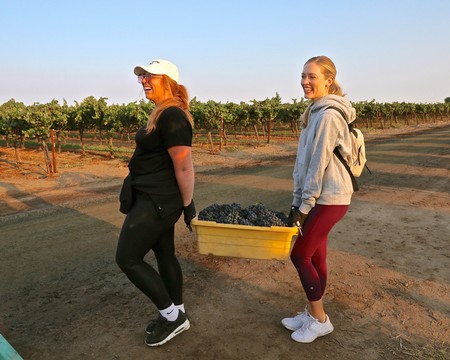 Popular wine influencers Casleah Herwaldt (left) and Lexi Stephens give each other a hand with a 35-pound lug box filled with Bare Ranch Primitivo grapes.

If you do not indulge in social media through Instagram, however, chances are you have no idea who or what are wine influencers. Understandably, Statista has reported that even as of July 2021, over two-thirds of total Instagram users are 34 years old or younger. Every industry analyst will tell you the same thing: That wine drinkers between the ages of 21 and 34 are the key to success in today's wine market. (Although, what's new? The youngest generation has been driving product marketing since World War II, mostly because they consume so much and also because older generations always endeavor to follow younger ones).

But being a wine influencer involves a little more than being just another pretty face smiling for an iPhone camera while holding up a bottle or glass. Fellow Instagrammers do not "follow" you if you have nothing to show of substance. In fact, out of our six visiting wine influencers, the one with the biggest following happens to be a Black man named Noël Burgess, whose Instagram handle is mrnoelburgess. The Petaluma-based Burgess has over 57,300 Instagram followers. His schtick, according to his profile, is: "Promoting diversity and inclusion in wine & travel with a focus on the places, the product, and most importantly the people!" 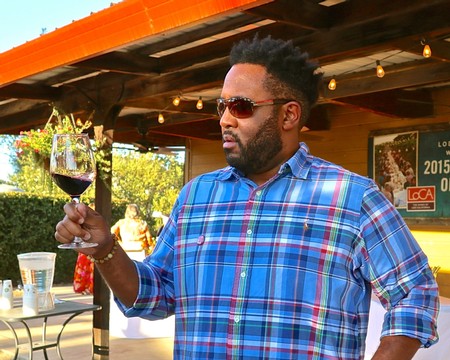 Noël Burgess, tasting at Lodi's Acquiesce Winery, has emerged as one of Instagram's most popular writers/photographers because of his unique and passionate insights into wines.

Earlier this week, Mr. Burgess posted a sunny photo of himself with fellow influencer Elle Rodriguez (themodernpour on Instagram) sipping Zinfandel in a Lodi vineyard. Within minutes the image recorded over 3,600 "likes."

The way I look at it: I have probably been Instagramming for longer than Mr. Burgess (I've posted 1,953 images compared to his 250), yet when I post something I consider it a great victory if I garner more than 25 "likes." My total number of Instagram followers? 1,655 — a lot more than most people, but peanuts compared to Burgess' 57,300+.

Ergo: Noël Burgess is a "wine influencer" extraordinaire. As are the other five wine influencers that we hosted in Lodi last week. 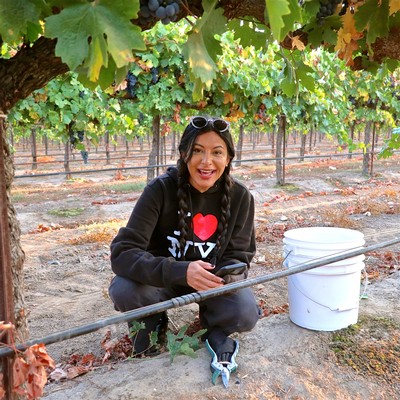 Elle Rodriguez — taking a moment to put together a multi-image post while picking Primitivo grapes in Bare Ranch — has cultivated a huge following (over 17,600 Instagram followers) because of her identity as an L.A.-based Latina woman, and her determination to bring wine appreciation down to earth (as she puts it, "Elle-vating" wine).

Casleah Herwaldt echoed the entire contingent's thoughts following their trip by telling us: "Lodi very much surprised me. I was awe-struck by the old gnarly vines, the agriculture, and the sustainable care of the land. Bechthold Vineyard, Cinsaut planted in 1886, was really something to behold!"

Still, Lexi Stephens cited other factors: "Of course, everyone knows about Lodi's Zinfandels and old vines, but it is much more than that. I was blown away by the hospitality, history, and people we met. Spending time with the faces behind this historic region allowed me to see how much pride and passion goes into the making of these wines." Jamie Knee concurred, adding: "Beyond the Mediterranean climate and world-class wines, Lodi is all about growers who believe deeply in sustainability, protecting their vineyards for future generations. This place is steeped in culture and history, yet welcomes diversity and innovation." 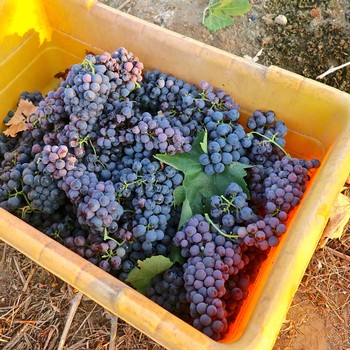 Over this past weekend, I posted Elle Rodriguez's 15-second video on Facebook, to which a Napa Valley winemaker with a long, impeccable reputation responded with blunt and honestly felt questions: "What is an influencer? Did they graduate high school? Do they have a higher degree? What have they achieved in their life?"

After spending three whole days with six of these influencers, the only answer I could give was this: "The smartest of them are extremely wine-wise, talented, and resourceful. We put them through the paces during their visit. I had no doubts, but they proved to be as billed — as impressive as anyone I've met in my 45 years in the wine industry. In many ways, more so. I wouldn't underestimate them."

Photos of a few high points during their visit... 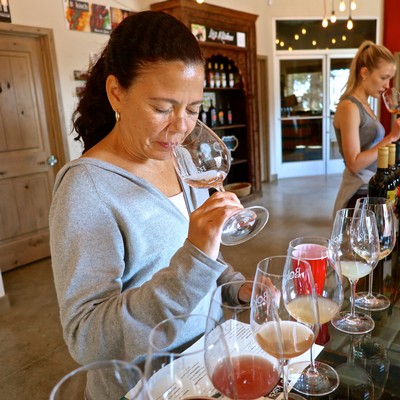 Jamie Knee (Instagram's petitewinetraveler) is a wine influencer with all the chops: a second level WSET (studies towards Master of Wine) certificate holder, a Certified Specialist of Wine, a multi-region Wine Ambassador, and an internationally traveled professional wine judge and educator. 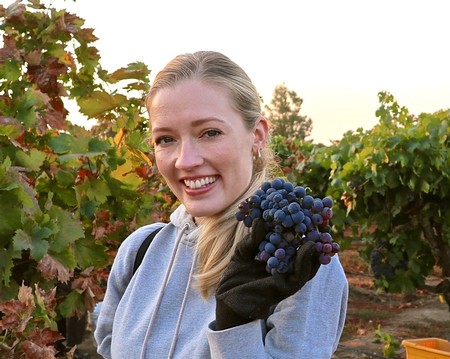 Lexi Stephens (Instagram's lexiswinelist) has a finger on the pulse of "everyday" wine lovers, but brings a formidable résumé to bear, including passing WSET's Level 3 with distinction and a Bachelor's from Lorenzo de Medici Italian International Institute (specializing in Italian art history, language, food and culture). 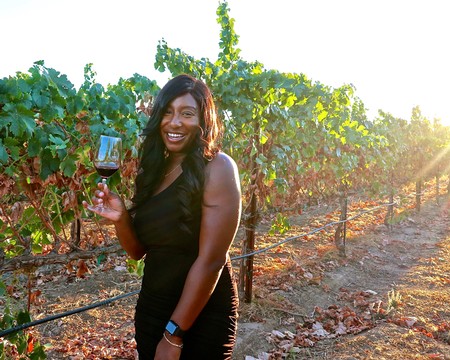 Desiree Harrison-Brown (winonoire on Instagram), enjoying the brilliant east side sunset in Acquiesce Winery estate, is an L.A.-based "wine + lifestyle" blogger who is widely followed because of her story — abandoning an East Coast, 9-to-5 corporate career for the "life of wine," garnering a Level 3 WSET certificate in the process. 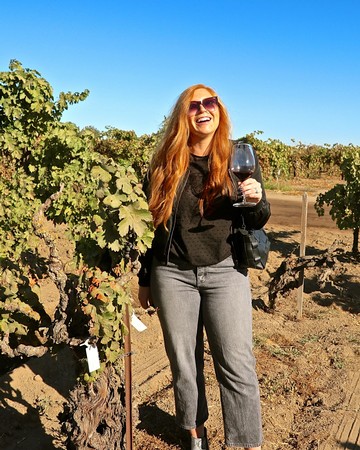 Casleah Herwaldt (bythestem on Instagram) is duly impressed by the 135-year-old own-rooted Cinsaut vines in Lodi's Bechthold Vineyard and has leveraged an unmitigated passion for wine and experience as a Certified Sommelier and WSET student into an equally passionate social media following. 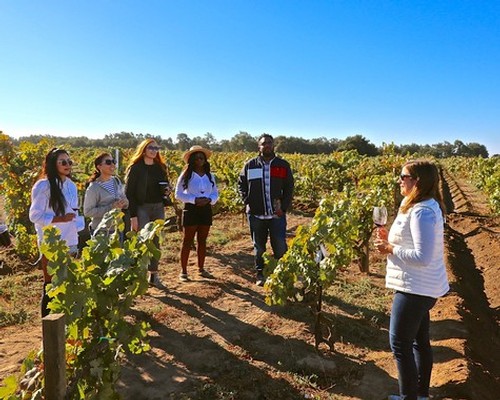 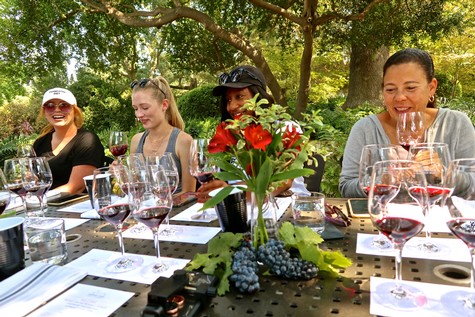 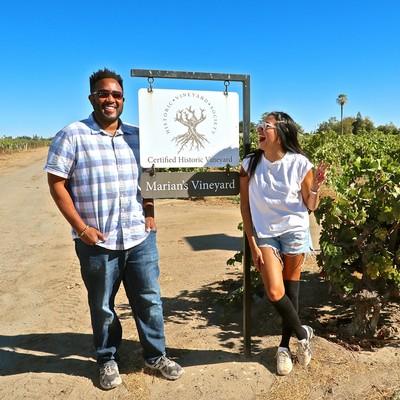 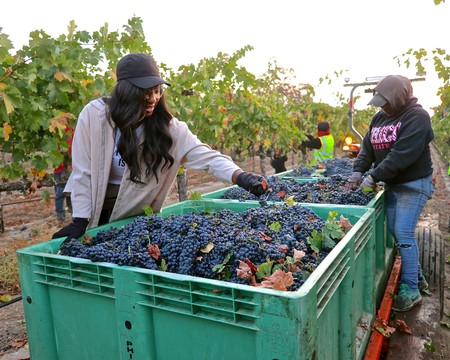 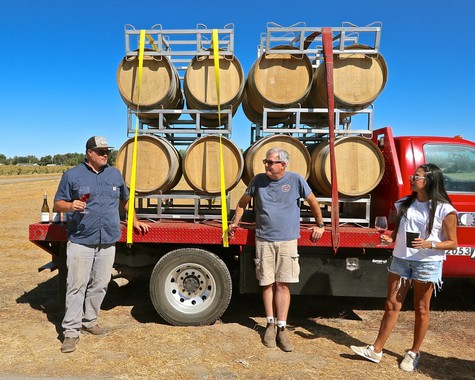 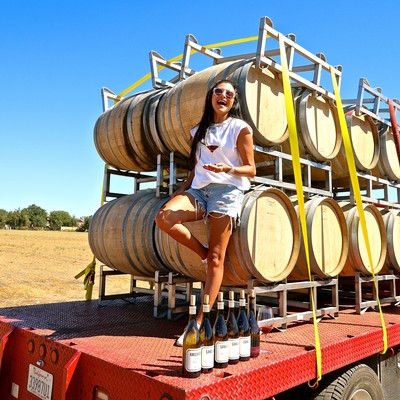 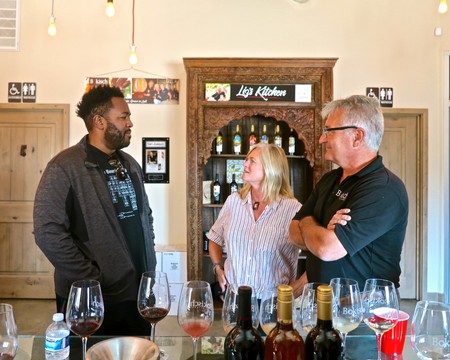 Noël Burgess having a talk with Bokisch Vineyards owner/growers Liz and Markus Bokisch. 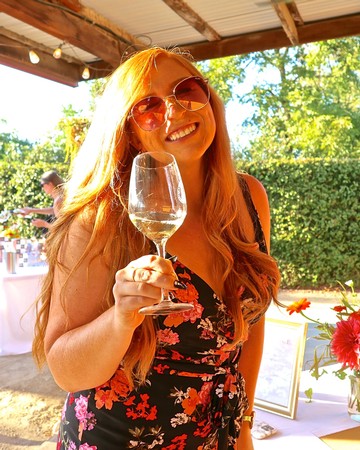 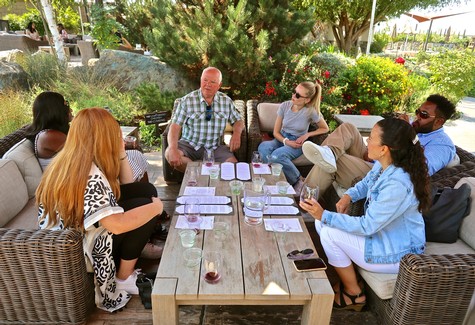 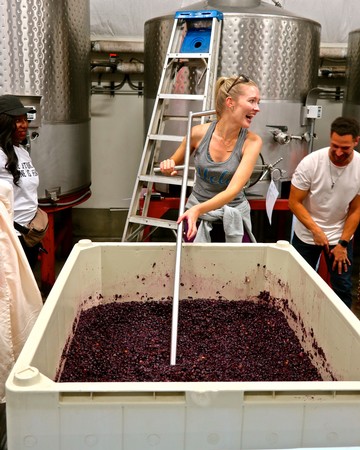 Lexi Stephens tries her hand at the arduous task of punching down 1-ton bins of fermenting Syrah at Bokisch Vineyards. 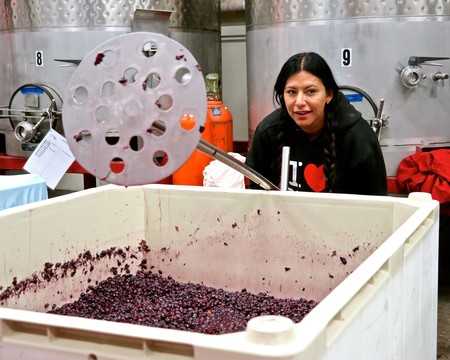 Elle Rodriguez taking the measure of the punch-down paddle in Bokisch Vineyards winery. 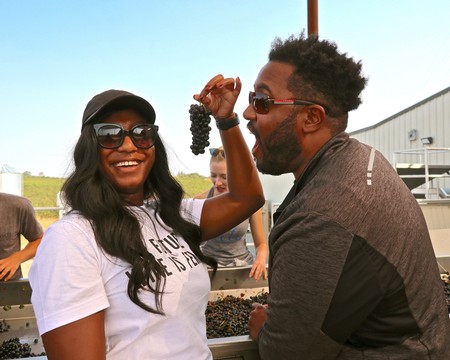 A lighter moment at the Bokisch Vineyards sorting line with Desiree Harrison-Brown and Noël Burgess. 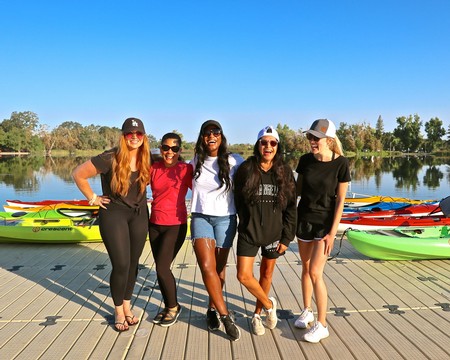 Our visiting wine pros getting ready to explore the Lodi appellation via kayak through its main waterway, the Mokelumne River, at Lodi Lake Park. 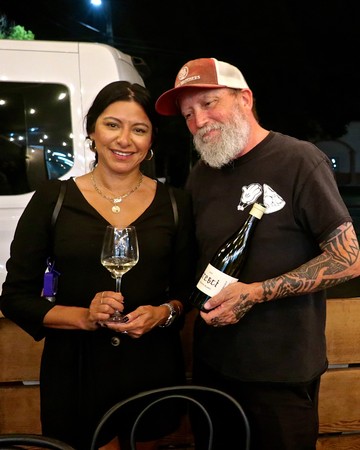 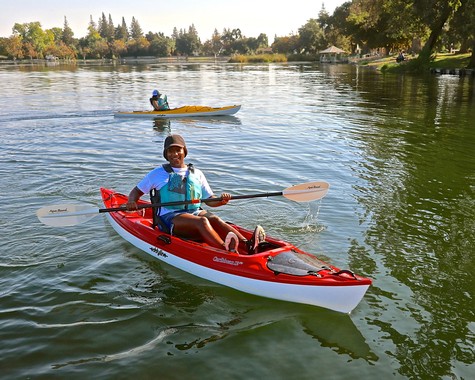 Desiree Harrison-Brown embarks on her exploration of Lodi's Mokelumne River.