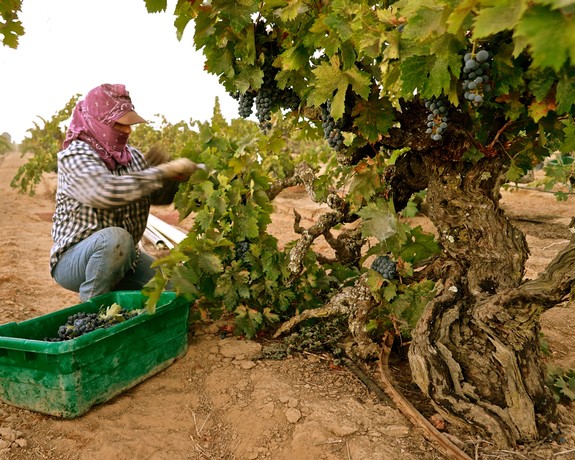 As a follow-up to our previous post on Why everyone loves old vines, some answers to pertinent questions are usually brought up in discussions about old vine wines...

What's more important, the fact that a vineyard consists of old vines or the advantages of a vineyard's site?

The answer is... both are equally important factors. Almost all old vines — that is, plantings that manage to survive in one place for over 50 years, and as long as over 100 years — reach that status because they happen to sit on a confluence of ideal climate, soil, aspect (i.e., slope and sun exposure), etc. There is a human element involved, too — vineyards survive if they've had caring ownership and management over generations. It's no coincidence that old vine plantings are found on the best sites for high-quality winegrowing, whereas vineyards on less advantageous sites are invariably pulled out. 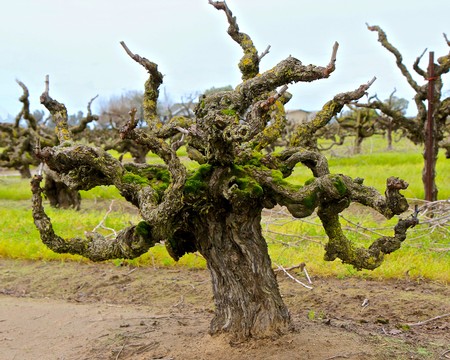 Own-rooted Zinfandel in Soucie Vineyard, one of Lodi's more venerated vineyards, was originally planted in 1916.

Ultimately, vineyards reach "old vine" status if they continuously demonstrate value-producing commercially viable or often fantastic wines, which make them more than worth the cost and effort of farming, even when old and less productive in terms of yield (old vines never produce as much fruit as newer plantings). A vineyard has to be worth saving rather than being scrapped and replaced with new vines, other crops, or (a common challenge all over the world) urban sprawl. 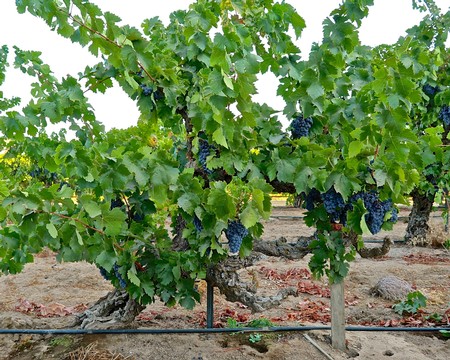 But old vines exist almost on their own planet, with historical tangibles. Many of them originally date back to periods of time when viticulture was not so technically elaborate (in Lodi, prior to the mid-1960s), resulting in vines allowed to develop the deep root systems and attributes that give old vine plantings a leg up — particularly, the ability to produce fruit of a consistent level of quality no matter how challenging a vintage maybe. Drought, flooding, heat, cold, frosts, fires, you name it, it's the deep-rooted older vines that are most likely to exhibit the ability to survive and even prosper, under the endlessly trying conditions.

The other thing about old vines, at least in California, is that they tend to be planted to grape varieties that benefit (in terms of wine quality and grapevine productivity) from vines of advanced age — Zinfandel, of course, as well as Carignan. In places like Contra Costa County and San Benito County, there are tiny blocks of excellent Mataró (a.k.a. Mourvèdre) over 90 years old. In Amador County, there are Mission blocks dating as far back as 1853. Lodi has its own peculiarities, such as Cinsaut and Flame Tokay plantings over 100 years old. 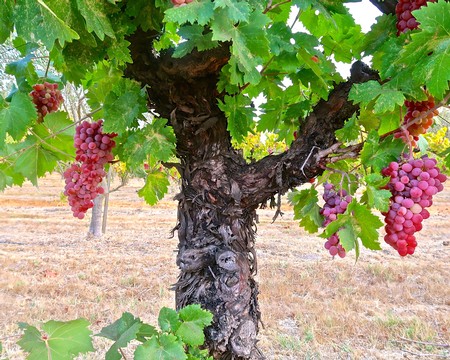 Christmas tree-like Flame Tokay, once Lodi's most widely planted grape, in Chandler Vineyard, was first planted during the 1890s.

But aside from rare exceptions, there really is no such thing as "old vine Cabernet Sauvignon" in California because Cabernet Sauvignon does not really produce superior wine once vines are past 20 or 30 years of age. It's simply better to pull them up and start all over. Although Petite Sirah has been cultivated in California since the 1890s, there are far fewer California plantings of this grape over 50 years old than Zinfandel. In Lodi, for example, "old vine Petite Sirah" is nonexistent — this is simply a case where younger vines make better wines at more efficient yields — although there are some Grenache and Alicante Bouschet plantings in Lodi going back as far as the 1940s.

In a 2018 interview, Turley Wine Cellars winemaker Tegan Passalacqua, who bottles over 30 different vineyard-designate California Zinfandels grown all over California each year, explained the differences between older and younger vines. To Passalacqua, the advantages are demonstrable: "We pick [old and young vines] separately so that actually gives us a true standard that we can test. We have wines made from old vines, and wines made from young vines, and we know there’s a difference. First, there is the chemistry—older vines consistently produce wines with higher tannin and acid than young vines, even when planted side by side in the same vineyard."

Second, according to Passalacqua, there are perceptible differences in sensory qualities. Passalacqua, in fact, could only think of one instance where they'd ever felt that a Zinfandel from young vines produced just as good a wine as the older vines from that same vineyard — "and that's out of working with 50 vineyards throughout the state." 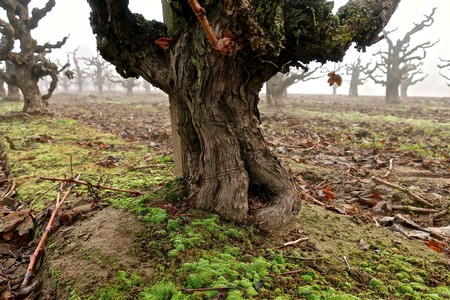 Wegat Vineyard, distinctive Zinfandel planted on St. George rootstocks on the west side of Lodi's Mokelumne River AVA by the Maley family in 1958.

Are wines from own-rooted vines better than wines from grafted vines?

Because of the region's sandy soils, most vineyards over 50 years old in Lodi are planted on their own natural roots, whereas in the rest of California almost all of the old to ancient vine vineyards are planted on phylloxera-resistant rootstocks such as St. George. Almost all the plantings over 90 or 100 years old in Contra Costa County, where the soils are even sandier than in Lodi, are own-rooted. Other than that, the rare exceptions of own-rooted ancient vines existing outside of Lodi or Contra Costa include the 1885 Ueberroth Vineyard in Paso Robles and the 1869 Original Grandpère in Amador County.

The oldest Lodi Zinfandel plantings on St. George rootstock that we know of are Steacy Ranch (planted in 1907) and Rous Vineyard (1909). When we compare Zinfandels from Lodi's better known own-rooted vineyards (such as the 1901 Marian's Vineyard, 1889 Royal Tee Vineyard, 1904 Lizzy James Vineyard, 1915 Kirschenmann Vineyard, to name a few) with the fewer number of Zinfandels planted on St. George rootstock (particularly the 1907 Steacy, the 1909 Rous and 1958 Wegat vineyards), we cannot honestly say that own-rooted vines show a distinct advantage in terms of quality or yield. Nor can anyone distinguish any sensory distinctions related to rootstocks. The differences in Zinfandel profiles that we observe in Lodi have far more to do with the site, or terroir, than the matter of whether they are grafted or ungrafted. 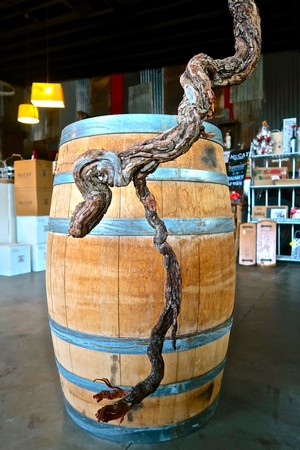 The taproot of the own-rooted Zinfandel plant pulled out of Lot 13 Vineyard, planted in 1918, on display in the tasting room of McCay Cellars.

The ungrafted, own-rooted Kirschenmann Vineyard, for instance, produces an extremely fine, delineated, layered style of Lodi Zinfandel. Then again, the St. George-grafted Steacy Vineyard vinified by the same winery (Turley Wine Cellars), in identical fashion, produces a Zinfandel that is just as refined, delineated, and layered.

We could say there are commonalities, such as floral, almost violet-like qualities, found in Zinfandels from the Rous and Wegat Vineyards, both planted on St. George. But there are also consistent differences, such as a Rous-grown Zinfandel's consistently structured, full-bodied feel and fruit focus compared to Wegat Vineyard's typically rounder, plusher feel plus the often loamy/earthy, occasionally herbaceous notes in Wegat's fruit profile. These are qualities clearly having more to do with the site — especially the fact that Wegat is located on Lodi's west side, whereas Rous is located on the east side, where the soils are visibly more sandy. 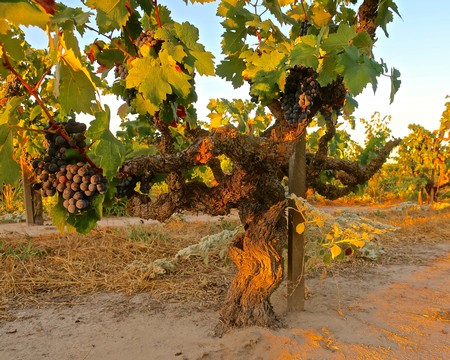 It goes without saying, old vine plantings such as these are not appreciated because one is "better" than the other. They are appreciated because each one produces unique and distinctive wines. It is not humanly possible to make sensory distinctions based upon whether an old vine planting is grafted or ungrafted, but it is definitely possible to make distinctions based upon each vineyard's location and individual set of circumstances.

The simplest answer is, "great" is always in the eyes, or mind, of the beholder. It does not matter, for instance, if wine geeks or pundits happen to opine that the finest California wines of today are produced from grapes like Cabernet Sauvignon, Chardonnay, or Pinot noir. If you do not enjoy the big, dense, rich, and oaky taste of Cabernet Sauvignon, the round and lush taste of Chardonnay, or if you find Pinot noir's perfumey qualities more annoying than endearing, obviously these are not the greatest wines for you. Why subject yourself to less than satisfactory experiences on someone else's say-so? 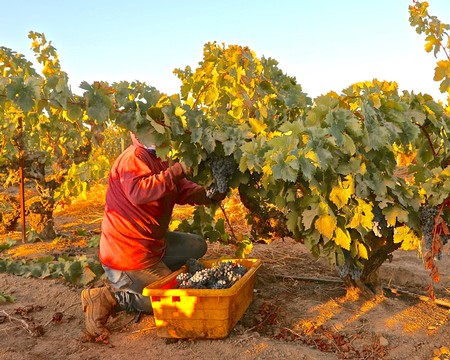 2021 Carignan harvest in the Borra family's Church Block, own-rooted vines dated back to the 1930s.

Although the word "great" is rarely associated with them, California Zinfandels, Carignans or Matarós have their own unique attributes. When they come from old vines, they can be intense but are also often on the gentle side. Either way, they can be compelling, especially since they tend to have earth-related sensory qualities resulting from the fact that they come from older vines that naturally express their "sense of place" (i.e., terroir), usually more so than wines made from the younger vines. Older vines, in short, typically assert their organic origins in the bottle. It's to be expected. 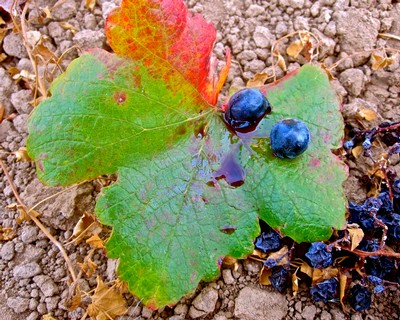 Therefore, the question of what types of wines taste "great" to you often comes down to this:

2. Do you prefer wines that reflect the style of a brand or the ethos of a winemaker, or rather a style intrinsic in grapes coming from a specific vineyard?

3. Intellectually, is the very idea of a wine made from vines that have managed to survive long periods of time neither here nor there for you, or do you really appreciate that kind of background story?

If your answers fall on the latter side of each of those questions, then pat yourself on the back for being an old vine lover. 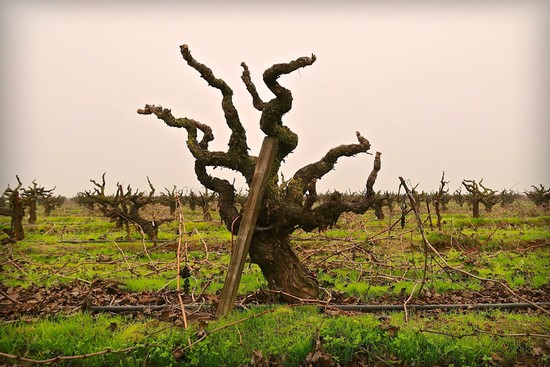