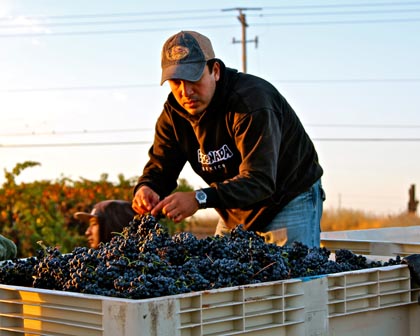 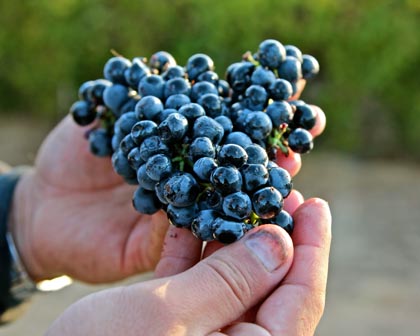 The quality of the Petite Sirah grapes, according to Viñedos Aurora winemaker Gerardo Espinosa, looks “a little more intense than previous years,” due primarily to a more dedicated regime of deficit irrigation.  This has resulted in a 2012 harvest of smaller clusters and berries – higher skin-go-juice ratios, which tend to increase flavors while favoring a better balance of sugar (the Petite Sirah grapes were picked right around 25° Brix), total acidity and pH.  Says Espinosa, “with sugars and acids more in line, we should be able to produce an intense yet balanced style of Petite Sirah, much like our 2010.”

If this is the case, the 2012 Viñedos Aurora Petite Sirah will come with great expectations, because the just recently released 2010 Viñedos Aurora Lodi Petite Sirah ($21) is as deliriously dark and rich as any California Petite Sirah:  starting with its inky purplish-ruby cast; followed by a nose oozing with almost syrupy blueberryish aromas, infused with ginger-peppercorn spice perfumes.

On the palate, the 2010 Viñedos Aurora Petite Sirah is made of considerably sturdier stuff than their 2009 bottling:  delivering an immense yet compact, dense, savory feel, pushing the spiced blueberry fruit qualities forward despite edgy, boisterous, youthful tannins, with a nuanced, sweet oakiness lurking in the backdrop.  If you love a ripped style of Petite Sirah, the 2010 Viñedos Aurora is for you.

Says Espinosa, “in 2011 we had some problems with the rain, and we were not able to produce as much Petite Sirah as we wanted.  But this year everything is coming together – we’ll be able to double production, and we are starting to see the character of the Viñedos Aurora ranch come out.  Our Petite Sirah tends to have chewy, ripe blackberry qualities – not as soft or fruit-forward as most Lodi Petite Sirahs, but with deep, dark fruit qualities.” 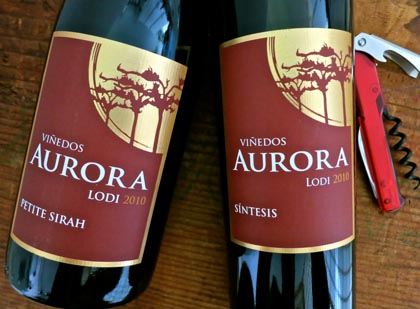 But wait, as they say, there’s more:  Espinosa has also just introduced the second vintage of their house specialty, the 2010 Viñedos Aurora Lodi Síntesis ($19):  a shiny, ruby-red blend of Cabernet Sauvignon (65%), with Tempranillo (25%), Merlot (5%), and Petite Sirah (5%).  As inevitable with proprietary blends, there is a studied quality about this wine – like the dark haired Southern belle descending Victorian stairs – yet still, a slightly illicit sense of passion in its luxurious aspects:  aromas, for instance, suggesting a bowl of cherries, a box of chocolate, whispers of new leather smudged with dusty earth.  Then, proceeding into the ballroom, tastes of chewing tobacco and mint chocolate – sensations indubitably derived from the Cabernet Sauvignon – softened by the plush black cherry qualities, undoubtedly from the Tempranillo and Merlot.

Viñedos Aurora is one of Lodi’s latest success stories:  owned and farmed by four Mexican-American brothers – Victor, Ramon, Armando and Gerardo Anaya.  Their nephew, Gerardo Espinosa (the son of Leticia Anaya), has been the brand’s driving force on the winemaking and marketing side.  A graduate of Lodi’s Tokay High as well as the San Joaquin Delta and Cosumnes River Colleges, Espinosa was working with the architectural firm of WMB Architects in Stockton (still his day-job) when he became inspired to start making wine as an amateur from the Anayas’ 40 acre vineyard, originally planted by the brothers in 1998. 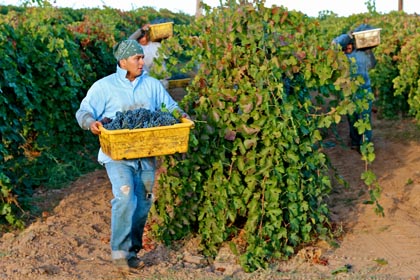 After winning a double-gold medal California State Fair Home Wine Competition for a 2008 Petite Sirah, Espinosa and his uncles started up Viñedos Aurora – meaning “first light of day,” and also named for the Anayas’ mother, Aurora – and produced their first commercial vintage in 2009.  Viñedos Aurora has proven so successful for the family, this past August 2012 they were able to plant another 50 acres of Cabernet Sauvignon, Petite Sirah, as well as Spanish grapes like Tempranillo and Albariño, in a new Clements Hills AVA vineyard less than a mile away on Tully Rd.

The wines of Viñedos Aurora are sold at Downtown Lodi’s Estate Crush as well as at the Lodi Wine & Visitor Center; and will also be available at the family’s own tasting room, opening by November 2012 in a space adjacent to the widely acclaimed Alebrijes Mexican Bistro, on W. Oak Street.  There in Downtown Lodi, Espinosa plans to collaborate with Alebrijes chef/owner Ruben Larrazolo on wine and tapas style tasting menus.

Star light, star bright – Viñedos Aurora is one Lodi vineyard and winery that seems to be shining as brightly in its second year of production as it did in its first! 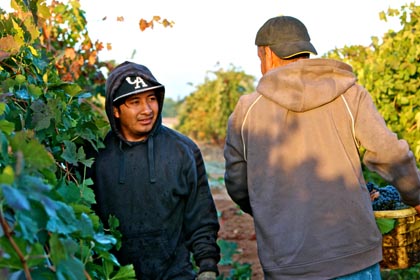