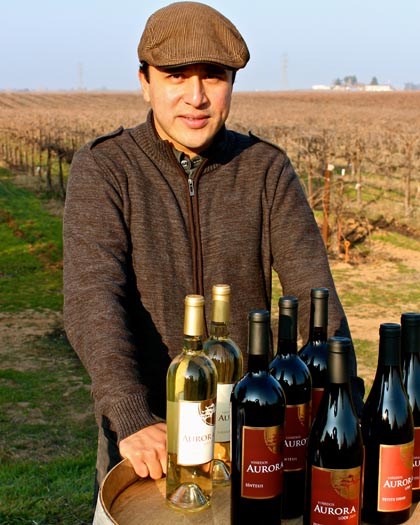 Viñedos Aurora, one of Lodi’s hottest new brands, is special for several reasons.  First, and most importantly, the quality of Viñedos Aurora wines is impeccable:  a purplish power packed yet finely chiseled Petite Sirah; a dreamily balanced and multi-scented Cabernet Sauvignon/Tempranillo/Merlot blend called Síntesis; and a light, minerally, whippersnapper of a dry white made from the Albariño grape.

Viñedos Aurora is also a great American story:  beginning with the grandfather of winemaker Gerardo Espinosa, Victor Anaya Rocha, who first came to the Stockton area from Michoacán, Mexico to work the fields in 1944.  For many years, Anaya Sr. traveled back and forth, raising four sons – Victor Jr., Ramon, Armando and Gerardo Anaya – all of whom earned degrees in agricultural engineering from the University of Michoacán. 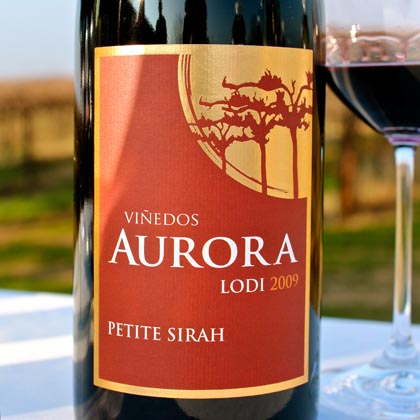 Gerardo Espinosa is the son of Anaya Sr.’s daughter, Leticia Anaya; and like his uncles before him, he grew up traveling back and forth between the San Joaquin Valley and Michoacán before finally staying put and finishing school at Lodi’s Tokay High.  Espinosa went on to attend the San Joaquin Delta and Cosumnes River Colleges to attain an architectural degree, and currently holds a position at the prestigious firm of WMB Architects in Stockton.

Typical of countless immigrant families who found success by pooling resources, the Anaya brothers transitioned from agriculture to owning and operating a retail as well as restaurant business in 1988; notably, Dos Hermanos Market on Lodi’s Central Ave., and Mar Y Tierra at the corner of Kettleman and Church.  Yet, their dream of working their own farm persisted; and so in 1998 the four brothers bought and broke ground on 40 acres of prime potential vineyard property east of Lodi in the Clements Hills American Viticultural Area, on Brand Rd., a prayerful Tebow’s sling from Bokisch’s Terra Alta Vineyard.

Market and viticultural research indicated that it would be wise to start with Petite Sirah and Cabernet Sauvignon grapes; and the Anayas’ vineyard quickly came into production, supplying some of Lodi’s larger premium wineries.  The brothers, however, were well aware of the fact that, like many growers in Lodi, they would need to take destiny into their own hands to remain viable in future generations.  Therefore, they began making their own wine in the classic garagistes (“garage”) tradition from their vineyard’s Petite Sirah, starting in 2002. 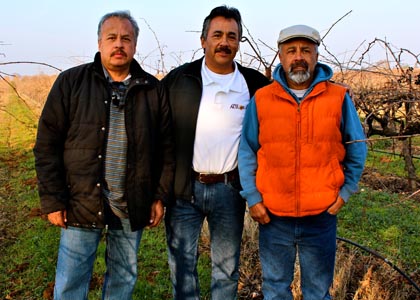 The younger Gerardo jumped in with both feet in 2007, immersing himself in enological study.  He credits people like Borra Vineyards’ Steve Borra and Markus Niggli, Fields Family’s Ryan Sherman, and other members of LAVA – the Lodi Amateur Vintners Association – for helping to fulfill the family’s ambitions.  After a 2008 vintage of their estate grown Petite Sirah earned a double-gold in the California State Fair Home Wine Competition, Espinosa felt that they were ready to go commercial:  and Viñedos Aurora – named for Victor Anaya Sr.’s wife Aurora (while also expressing the idea of a “vineyard” that sees “first light of day”) – was born. 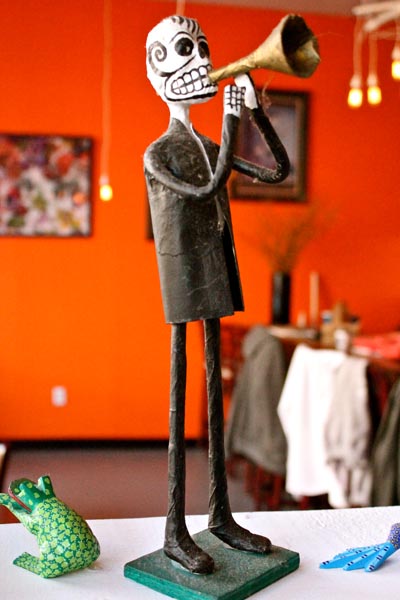 Espinosa also credits Rolando Hererra, the owner of Napa Valley’s Mi Sueño, one of the first successful Hispanic owned wineries in California, for guidance and inspiration.  “Rolando advised ‘don’t quit your job as an architect,’” says Espinosa, “because the winery is going to be a three, four year investment… you’ll need to grow slowly to see exactly how much you need to produce for careful return on investment.” Viñedos Aurora’s 2009 production – all done at the custom crush facilities in Downtown Lodi’s Estate Crush (where the wines are also sold) – amounted to 250 cases.  The 2010 vintage is shaping up to about 600 cases, and in 2011 they are projecting about 800 cases.

Adds Espinosa, “we’re influenced by Spanish varietals, which is why we’ve been supplementing our own grapes with Albariño grown by Markus Bokisch, and Tempranillo from Stuart Spencer’s vineyard (St. Amant) in Amador.  We’re also Spanish influenced in our winemaking… we like a mellow style that goes well with food, especially dishes with Mexican influences.”

Even better news:  the Anaya brothers have also acquired 50 more acres nearby on Tully Rd., where in 2012 they will soon be planting their own Albariño and Tempranillo, plus other classics like Malbec and Merlot.

We can all take pride in the hard fought, burgeoning success of this exciting new vineyard and winery estate, adding to Lodi's rich and inspiring heritage! 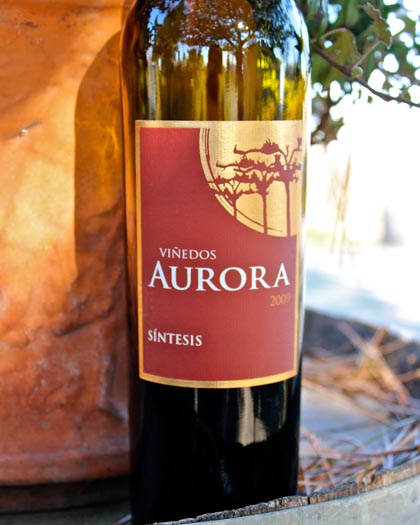 2010 Viñedos Aurora, Lodi Albariño ($17) – This 100% stainless steel produced wine is fragrant with peach skin and lemon/citrus notes in the nose; medium in body, with lemon/lime tartness on the palate, finishing firmly dry with a minerally flow.

2009 Viñedos Aurora, California Síntesis ($19) – Like all successful varietal blends, Síntesis is more of an elegant sum of its parts rather than a jumbled combination:  the Anayas’ estate grown Cabernet Sauvignon (60%), Amador County grown Tempranillo (30%), and Napa Valley Merlot (10%) laced together to form a red wine with pungent berry and earthy spice aromas, a firm medium-full body with a velvet texture, filled out by smoothly rounded oak and natural fruit tannins.

2009 Viñedos Aurora, Lodi Petite Sirah ($21) – Estate Crush partner Bob Colarossi has described this purplish red as having that “Lodi je ne sais quoi” — whatever it is, it’s delicious!  The nose suggests a compelling richness of decadent chocolate covered blueberries; and on the palate, the thickly textured yet round, richly fruited qualities roll around in the mouth like a plump, quivering Christmas pudding.