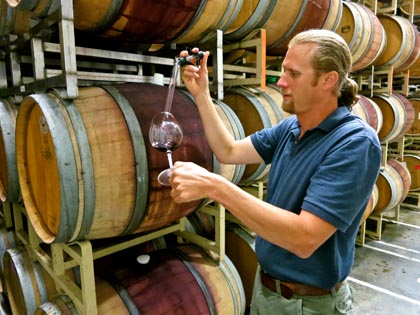 There is a new winemaker at Van Ruiten Family Winery; which, since founded by John Van Ruiten Sr. in 2000, has emerged as one of the Lodi American Viticultural Area’s most consistent, and beloved, producers of wines that are now sold in over 40 states across the country.

Ryan Leeman, who crafted numerous award winning wines since joining the Van Ruitens in 2003, has recently left for a new position in Sonoma County.  This past June 2012, Matt Ridge has come aboard as winemaker, bringing his own strong set of skills and experience.  With Ridge’s arrival, the family is extremely confident and enthusiastic about its plans for the near-future:  to take Van Ruiten’s yearly production from its current 30,000 cases to over 60,000 cases.

Like many of Lodi’s top producers, Van Ruiten is built from the ground up:  starting as an established grower, not winery.  Both a second and third generation now run the Van Ruiten interests, consisting of over 1,000 acres, mostly on the west side of Lodi.  800 of those acres are devoted to wine grapes, and the rest to orchards or ranching.  There are, of course, several prize pieces, including 50 to 100+ year old plantings of Zinfandel and Carignane – much of it sold to other wineries, but the crème de la crème going into Van Ruiten’s own wines. 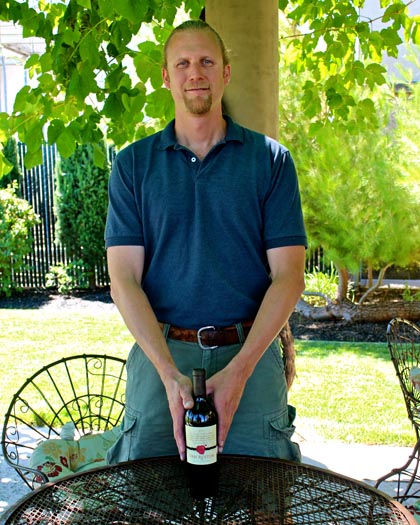 Hence, the amazing quality of the family’s signature wine:  the 2010 Van Ruiten Lodi Old Vine Zinfandel ($15).  The 2007 version of this wine was once dubbed “best Zinfandel in the world” by a Wall Street Journal wine panel headed by Hugh Johnson.  The 2010, representing a vintage that all of Lodi’s winemakers say is the best anyone can remember, is even better than the vaunted ‘07:  beautifully scented with fresh, brambly berries and just a smidgen of sweet oak, underlining silky smooth, even keeled flavors, draped gracefully across the palate.  When you’ve got the “goods” – as in top vineyard holdings – the hits, like Van Ruiten’s Old Vine Zinfandel, just keep on comin’.

It’s hard to say who is more excited about Ridge’s arrival – the Van Ruiten family, or Mr. Ridge himself.  “I’m ecstatic over what I’m seeing,” say Ridge, talking about his first month with the winery, looking over the vineyards with Jim and John Van Ruiten Jr.  “The family has been seeking my input as a winemaker on where to take things insofar as the farming, and I’m excited about working with these incredible grapes.”

Asked about what, if any, changes Van Ruiten’s legion of followers might expect henceforth, Mr. Ridge tells us, “my approach would involve an even stronger emphasis on varietal character – wines that taste more of fruit, and less of oak or alcohol.  At the same time, I like a red wine with more of a structured feel – a little broader, a little more filling in the mouth, while brighter, more expressive in fruit characteristics.”

You can also expect Ridge to be respectful of Lodi terroir, which he talks about with refreshing candor.  “If a Chardonnay, or a Syrah or Cabernet Sauvignon, grown in Lodi wants to taste a certain way, that’s the way I’ll try to shape them.  I see no sense in trying to make, say, a Rombauer style of Chardonnay in Lodi — to do that, you need grapes from Carneros — or a Napa style of Cabernet, when we can get just as bright and fresh a style of wine, but one that shows the best of what we can get in Lodi.”

Ridge’s outlook, in fact, comes from his extensive experience working as a winemaker in Mendocino and Sonoma counties; as well as in New Zealand, where he was exposed to people from all over the world, doing innovative things.  Ridge also has had a ton of firsthand experience with Lodi grown grapes:  first, while working for Delicato (from 1999 to 2003); and most recently, as the head winemaker at Downtown Lodi’s Estate Crush (2010 to 2012), where he managed small lot programs for over 60 clients at a time.

“My experience at Estate Crush was great because not only was I doing hands-on winemaking, in a small but incredibly intense setting,” Ridge tells us, “but it also put me back in direct touch with Lodi grapes and growers… people like Jon Wetmore (the grower/proprietor of Round Valley Ranches and Grands Amis Winery), Markus Bokisch (Bokisch Ranches), Todd Maley (grower/proprietor of Maley Brothers), and Gary Patterson (one of Lodi’s most respected growers).”

No doubt, we will all need to wait two to three years before we see a significant “Matt Ridge” stamp on the wines of Van Ruiten Family.  Mr. Leeman left big shoes to fill, plus the fact that wine is, after all, an agricultural product:  you only get one shot at a time – one harvest each year – to get everything right.  That is, wines that please the ever-evolving tastes of consumers, and wines that make a splash that everybody notices.

Everything bodes well for the Van Ruitens.  They have their winemaker with a real “touch” – fingers on the pulse of what wine lovers are looking for, plus a firm grip on what makes this winery so special:  built, as it is, upon roots set firmly and deeply in the ground, where all great winemaking starts. 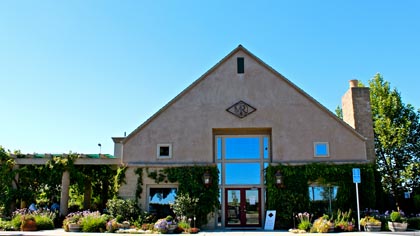