Tom Hoffman goes against the grain at Heritage Oak 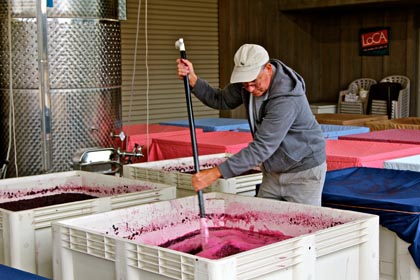 Like his wines, Heritage Oak Winery’s Tom Hoffman has never been one for hyperbole or false deprecation:  he just says it like it is; and if it makes sense, that’s the way he does it.

One thing you can always depend upon when enjoying a Lodi grown Heritage Oak wine:  it will taste pretty much like the grapes it is made from, along with the vintage conditions shaping its sensations. 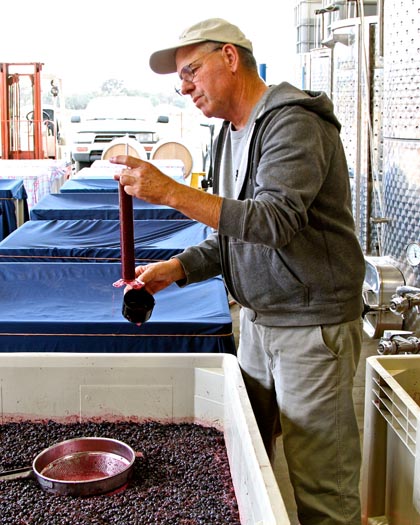 Of the 2012 harvest so far, Mr. Hoffman tells us that this has been an “abundant” year – “I’m going to end up with more wine than I have barrels for.”  He is willing to describe the incoming Zinfandels as “looking great,” but of the 2012 Sangiovese, Syrah and Tempranillo, Hoffman’s one-word assessment (Hoffman doesn’t use more words than necessary) is “challenging” – if anything, “with acids and pH a little more up-and-down than what I would’ve wanted.”

When we visited Hoffman on Friday of October 12, we found him taking sugar readings and punching down his fermenting half-ton bins.  He does the latter three times a day, utilizing a canoe paddle — because he likes to do a little bit of stirring, on top of breaking up the floating cap of skins and other solids).  While doing his paddling, Hoffman elaborated on the 2012 Zinfandel picks:

“The Zinfandels have been looking good – nothing coming in screaming, with high sugars like 27° Brix.  It’s been more like 24°, 25° – nothing overripe or underripe.  We picked most of the Zinfandel at the end of the September, and the last of it for ourselves (Heritage Oak’s Block 5) this past Monday (October 8).  There’s still a few rows hanging out there, but destined for another winery, as soon as they are ready for it.  It’s hard to tell exactly what the quality will be like – colors are good, but we’ll need to taste them in another year before making any kind of statement.”

Even of the three vineyard-designate 2010 Heritage Oak Zinfandels currently in release, Hoffman is less than forthcoming; allowing only for the fact that “the 2010s are a little sharp right now – I wish I could hold on to them a little longer, but it’s what I have to sell right now.”

Of those three 2010 Zinfandels, Hoffman’s current favorite is the Bartlam, which seems to have the most “spice complexity.”  Of the two grown by Hoffman on the trellised vines originally planted by his grandfather, Verne Hoffman, in the 1960s, the Block 5 is tasting “the fullest,” and the “Block 14 is tasting like Block 14 – not as full, but as always, bright and intense.”

Hoffman explains that the Heritage Oak Zinfandel plantings are on trellises – as opposed to the free standing head trained vines typical in classic Lodi Zinfandel vineyards – because “my father was heeding the wisdom of the university professors at the time.  He didn’t plant them on trellises for machine picking, he actually planted them that way for quality purposes.  Now that they are older, they’re like any other field of big old vines, only on wire.” 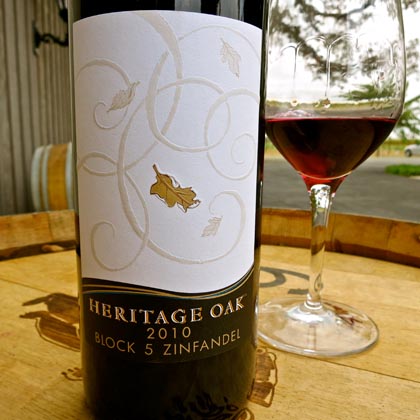 Collectively, the 2010 Heritage Oak Zinfandels are among Lodi’s most elegantly styled, while also vivid expressions of the grape — pretty much the opposite of the big, ripe, fat styles, more typical of Lodi grown Zinfandels.  Something that makes sense to Mr. Hoffman, evidently, if not anyone else.  Our notes:

2010 Heritage Oak, Block 5 Lodi Zinfandel ($24) – Although this vineyard is located just to the north of Block 14, the difference is the north-south orientation of its rows (Block 14 runs east-west), which translates into more intense sun exposure – “you can hear the grapes kiss and pop,” says Hoffman – and thus, slightly higher Brix and resulting alcohol.  At about 15.5%, this is the fullest  of the 2010 Heritage Oak Zinfandels, yet there is nothing heavy or cumbersome about it:  just rich, concentrated dark berries nuanced with licorice and sweet peppercorn spices, tasting broad, full, yet zesty and finely textured in the mouth.

2010 Heritage Oak, Bartlam Lodi Zinfandel ($24) – Peppery spice adds complexity to a bright raspberryish varietal nose; and while the Bartlam’s body tips more towards the fuller side – owing primarily to denser, sturdier young-wine tannins – the feel is fleshy despite the phenolic edginess.  At this point, a wine that almost needs a good cut of beef or lamb to absorb its youthful intensity. 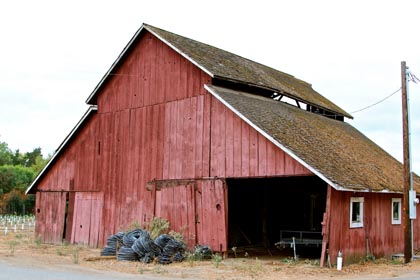