Tizona by Bokisch’s Zinfandel is a new Lodi classic 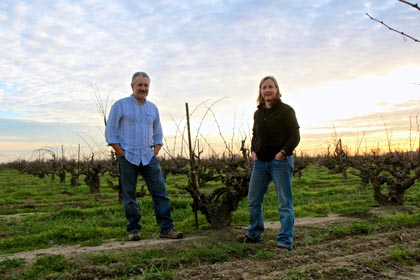 The more consumers and wine critics have come to appreciate kinder, gentler, more feminine styles of California Zinfandel, the more they are appreciating Zinfandels grown in Lodi.

Adding to that increasingly verdant vein, major Lodi growers Markus and Liz Bokisch have just released their first-ever Zinfandel; bottled under a brand new label – Tizona by Bokisch – to distinguish it from the Spanish varietal wines carrying their Bokisch Vineyards label.

Tizona is the name of the sword wielded by the legendary 11th century Spanish warrior known as El Cid, signifying the Bokischs' cutting-edge approach to winegrowing as well as their respect for things of historic significance – such as Lodi's wealth of "old vine" growths, dating as far back as the 1880s. 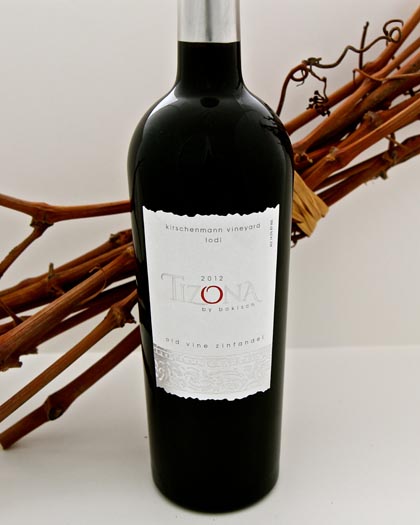 Indeed, the 2012 Tizona Kirschenmann Vineyard Lodi Zinfandel ($32) is sourced from a 15-acre block of gnarly, old Zinfandel vines originally planted on their own rootstocks (meaning, they have never been grafted onto other rootstocks) in 1915.

The wine itself, bottled after spending two years in neutral (i.e. well-used) French oak barrels, is a liquid consummation of what is becoming more closely identified as a true "Lodi style." That is, it was deliberately crafted to avoid duplicating what many consumers expect out of most Zinfandels grown in California; particularly the bigger, sturdier, plumper fruit style associated with quintessential Sonoma County or Napa Valley Zinfandels.

By way of contrast, the 2012 Tizona Zinfandel from Kirschenmann Vineyard is a remarkably silky, delicate, feminine style of Zinfandel; nearly transparent in its cherry-red color, with flowery perfumes of red berries and cherry, fresh and zesty rather than heavy or jammy. Another Lodi signature is its Black English tea-like note in the nose. We also find faintly scrubby, earthy, almost lavender-like savory qualities; mingling with black cherry/strawberry leaf sensations in the wine’s long, gentle middle and after-taste.

"There is distinct sense of place to this wine," remarks Mr. Bokisch, "… qualities shared only by surrounding vineyards. This is why we backed away from new oak – to let the vineyard speak." Bokisch Ranches (the Bokischs' agricultural arm) organically farms Kirschenmann Vineyard for its current owner, Tegan Passalacqua, who purchased it from the Kirschenmann family in early 2012.

Old-time Lodi growers knew the Kirschenmann site – located on the east side of Lodi's Mokelumne River AVA, along Bruella Rd. – as the Baumbach Vineyard; but the name was changed by Passalacqua in honor of the growth's long time custodians.

Kirschenmann also represents Bokisch Ranches' first foray into Zinfandel viticulture, although not for previous lack of desire. "I was beside myself when Tegan first approached me about farming Kirschenmann," says Bokisch. Located just a country block from the Bokischs' home on Cherry Rd., Kirschenmann was a vineyard that Markus and Liz would often gaze longingly at during their Sunday morning walks. 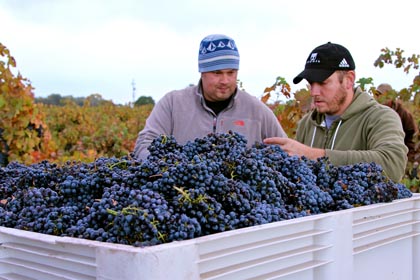 "I had always wanted to work with gnarly old Zinfandel," Mr. Bokisch tells us. "I just said, let's do this… and as soon as you accept new things like this in your life, your outlook on winegrowing really does start to change. We are now farming a total of 45 acres of old vine Zinfandel in four different blocks, three of them within a stone's throw of each other."

Mr. Passalacqua himself may not be a Lodi old-timer, but his reverence for ancient Zinfandel is well known in the broader wine world: while serving as the current winemaker/vineyard manager of Turley Wine Cellars – quite possibly California's most prestigious grower/producer of old vine Zinfandel, sourced anywhere from Sonoma County to Napa Valley, Paso Robles, Contra Costa, Amador County and, of course, Lodi – as well as owner/winemaker of his own Sandlands Wines brand, Passalacqua is also a founding director of Historic Vineyard Society, a nonprofit organization dedicated to the recognition and preservation of California vineyards over 50 years of age. 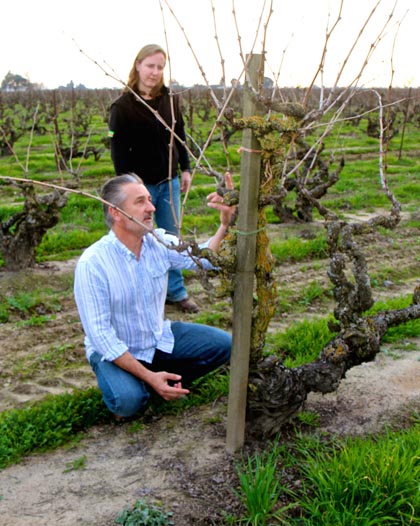 Wines made from ancient vines are not automatically the finest. Vine age guarantees a winemaker, and consumer, absolutely nothing. Plantings as young as 3 years old have been known to produce great wines. Nonetheless, there are reasons why only certain vineyards, in certain parts of the world, continue to thrive even after 50, 75, or over 100 years.

Grape variety has a lot to do with it: ancient vine plantings of Zinfandel, Mourvèdre (a.k.a. Mataro) or Carignan, for instance, are known to produce wines of fantastic quality, and fairly decent quantity; whereas there is usually no benefit in terms of quality and yield when it comes to most classic wine grapes (such as Cabernet Sauvignon, Merlot, Pinot Noir or Chardonnay) when cultivated beyond 35 or 40 years.

When he purchased Kirschenmann Vineyard three years ago, Passalacqua knew exactly what he was getting into; having worked with the late Ross Schmiedt's Dairy Vineyard (bottled as Schmiedt Ranch Zinfandel by Turley Wine Cellars), located just a few feet away from the Kirschenmann site. "These Zinfandels will never be for everyone," Passalacqua was quoted to say soon after taking possession of Kirschenmann.

Continues Passalacqua, "This particular bend of the Mokelumne River sits in a slightly cooler pocket of air than surrounding areas, and gives us prettier, higher toned wines – not the type of inky dark or massively structured wines many people look for in Zinfandel. The wines here have medium to medium-plus concentration, and aromatics that are more on the floral side, yet with a good amount of spice and pepper, and just enough tannin structure to make it full, but not gigantic."

The Tizona, of course, is just one Zinfandel, from one particular vineyard in Lodi. The nice thing about it is that we are now beginning to see more vineyard-designated bottlings of commercial Lodi Zinfandel showing as many variations of a theme as there are vineyards. If anything, it is fortuitous that this theme happens to be what more and more consumers are loving: more subtle, refined, balanced, and even more food-versatile styles of Zinfandel – and it’s about time!