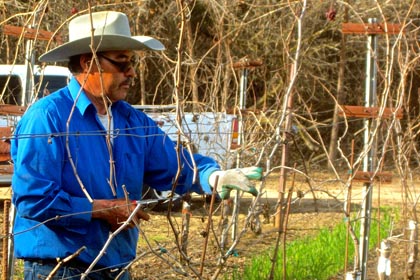 Wine, it is often said, is made in the vineyard. Which sometimes brings up the jocular comment: then why the heck do we need wineries?

Well, good wine does come out of wineries. But it also needs hands – lots and lots of hands of men and women with the work ethic, talent and creative juices to turn grapes into something magical in the glass.

And those hands aren’t needed only in a winery. It starts in the dirt, or sticking mud, out in the fields soon after each harvest; during the cold, damp, biting days of winter when leafless, dormant canes are pruned back to allow the vines to rest in anticipation of new bud growth the following spring. Machines have been invented to aid this process, but over 99% of the pruning is still done by hand.

When you consider that, in the entire Lodi AVA, there are nearly 113,000 acres of vines in the ground (the most widely planted wine region in the U.S.), and there are at least 600 vines on each acre, that's about 68 million individual plant that need to be touched, and artistically sculpted. This requires a full court press of both men and women (especially women pruners, who are prized by growers for their fine motor skills and attention to detail). 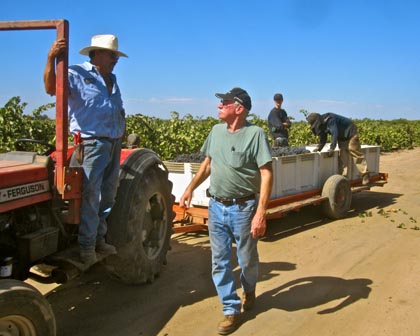 Wine grape vines don't cultivate themselves; and the process of crushing or pressing grapes, fermenting and barreling down wines, and countless other steps involved in the "natural" phenomenon of winemaking all require direct human input – good sense and sensibilities. This is where the skills of worker bees come in: people who may not be the owners or executive winemakers, but whose talent and self-motivation are just as crucial to the process of getting good wines from the fields to our tables. 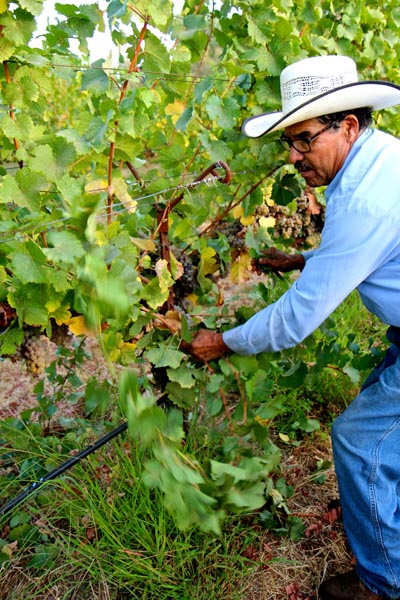 Then there are the people who recruit – and cajole, teach, lead and encourage – and lead the worker bees, mostly by setting examples; showing them what it takes to do the actual back breaking, skin callusing work of pruning, leaf and cluster thinning, and picking of these millions of plants.

Steve Borra, the owner of Borra Vineyards – Lodi’s oldest small family winery (bonded in 1975) – makes no bones about why his operation has run so smoothly all these years: his name is Manuel Maldonado, who commands the Borra Vineyards field crews as Mr. Borra’s longtime Vineyard Manager.

Mr. Maldonado manages over 200 acres of planted vines, plus everything else that grows around the Borra winery or vineyard waterways. "Manuel," says owner/grower Steve Borra, "has a green thumb. He not only makes everything grow very well, I think he has a name for every grape vine – they're more like his children to him."

After coming to Borra from Mexico some 38 years ago, Mr. Maldonado still speaks less than perfect English, which has never bothered Mr. Borra. The results of Maldonado’s work speaks loud and clear.

Maldonado can very well tell you, for instance, "When we prune we do not leave extra wood, because too much wood is not good for the vine. "Each vine must be in balance – the right amount of grapes, and the right amount of leaves – because this is the way you make good wine."

Maldonado, in other words, strongly feels that he does not grow grapes – he grows wines.

Proof is always in the pudding: wines such as Borra's Heritage Red (a Barbera based field blend) and Fusion Red (a sumptuous blend of Syrah and Petite Sirah) have been among the most acclaimed in California.

Mr. Borra also owns Lodi Pump & Irrigation – the leading supplier of irrigation and water monitoring equipment in the Lodi region for the past 30 years. He tells, “See that whole weather station there? It connects with soil moisture probes and remotely with the programmable irrigation system so we’ll know if the vines need more water. Manuel can tell me in a second if they need more water just by lookin’ at ‘em.”

Adds Mr. Borra, "When Manuel came here he didn't speak a word of English and I didn't speak Spanish… but we rode around in a truck all day, and eventually taught each other enough of our languages to communicate just fine." Maldonado adds this pertinent fact: "I married my Mexican wife right after I came to Lodi, and we raised 8 kids, who are now 16 to 37 years old."

Maldonado is particularly known for the loyalty he inspires in his vineyard crews: 5 to 10 sets of hands all year round, depending upon work loads, and another 20 to help during harvest. Without Maldonado's penchant for recruiting through friends and connections, Borra Vineyards simply wouldn't function as a winery and supplier of grapes to other wineries, inside and outside of California.

And for that, we should all be grateful, as we sip the magical, delicious fruit of the labors of men like Manuel Maldonado that end up in our glass. 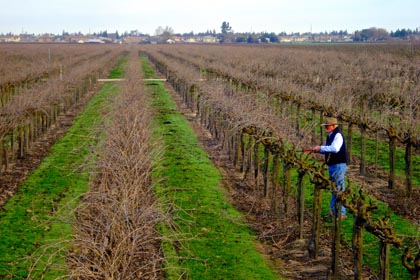