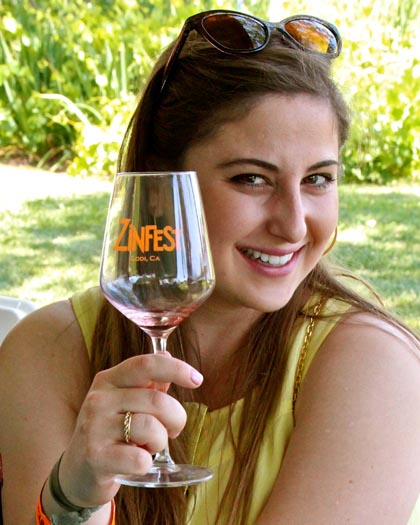 The ZinFest Wine Festival on Saturday, May 17, 2014 will be an opportunity to taste over 200 wines representing the incredible diversity of winegrowing going on in the Lodi American Viticultural Area.

We mean that figuratively, of course. Please don't taste all 200+ wines – we don't want to carry you out on a stretcher.

We strongly recommend, however, following classic wine tasting protocol: swirl, sniff, sip and spit. This will allow you to take in an amazing number of fascinating wines grown and produced in Lodi.

But wait, there's more: many of these wines will also be available for purchase in the ZinFest Wine Shoppe – another opportunity to load up, especially on the harder-to-get handcrafted wines that you’ve read about or heard of, but simply aren't available through normal retail channels. 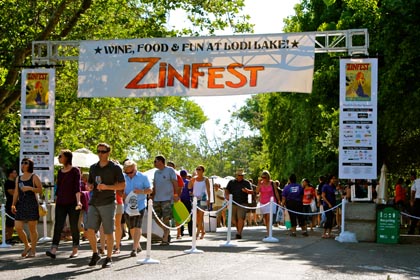 To help you plan your afternoon in Lodi Lake Park, the following is a heads-up on the special wines that will be poured; with the wines listed with asterisks (*) available for purchase in the ZinFest Wine Shoppe, plus some of our remarks: 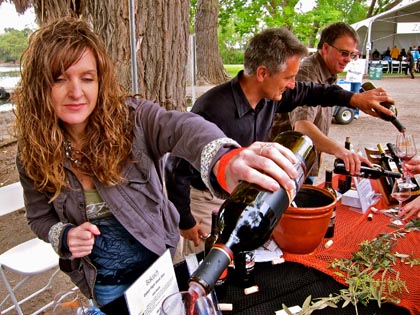 The Bokisch table during ZinFest

Bokisch Vineyards
All from Markus and Liz Bokisch's famed Bokisch Ranches vineyards – Spanish and Portuguese varietal bottlings, second to none in the U.S., and most certainly comparable to the finest from Europe. A must-stop!
*2013 Albariño
*2011 Graciano
*2013 Verdelho
*2011 Tempranillo 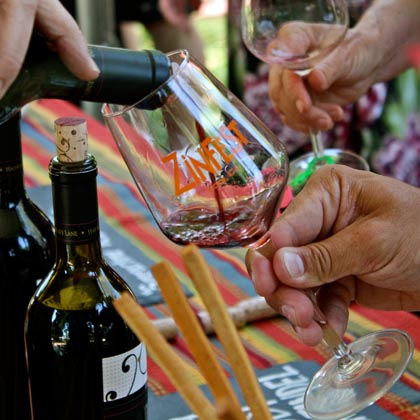 E2 Family Winery
The Ehlers clan behind E2 can trace their arrival in the Delta region back to the 1830s, and their experience as winemaker/growers since the 1920s.
*2012 Verdelho Elegante
*2012 Zagan's Fire Pinot Noir
*N/V Farmer's Table Big Blush
*2012 Zagan's Fire Zinfandel

Estate Crush
This is Downtown Lodi's custom crush facility, producing wine for over 60 winery/clients. Hence, the masterful consistency intrinsic in their own brand of wines; including a Cinsault from Lodi's oldest vineyard (the historic Bechthold Vineyard, planted by the Spenker family in 1886), and one of the silkiest, prettiest Zinfandels (the Stellina) grown on Lodi's west side.
*2012 Albariño
*2012 Rosé
*2012 Cinsault
*2011 Stellina Old Vine Zinfandel 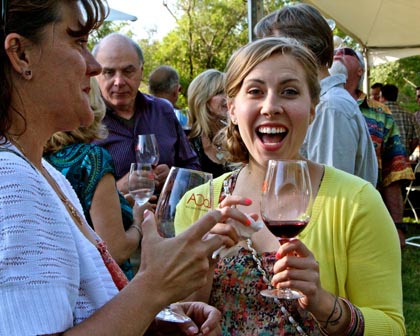 Harney Lane Winery
Owners Kyle and Jorja Lerner carry on a winegrowing tradition (as one of the more significant branches of the Mettler family) dating back to the early 1900s; and today, their Harney Lane estate exemplifies all that is amazing about Lodi – incredible grapes, even more incredible, meticulously crafted wines, and an enduring, uncompromising commitment to that quality and family feel far into the future.
*2012 Albariño
*2012 Rosé
*2011 Zinfandel
*2010 Tempranillo 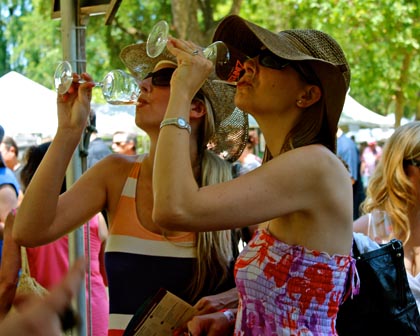 Heritage Oak Winery
Owners Tom and Carmela Hoffman grow and produce wines in an idyllic setting along the banks of the Mokelumne River on Lodi's east side; their puristic, non-nonsense, delicious wines expressing every bit of their intense love of the land and devotion to sustaining Lodi's environment.
2013 Sauvignon Blanc
2011 Block 14 Zinfandel
2011 Old Vine Zinfandel

Ironstone Vineyards
The Kautz family who own Ironstone are one of Lodi's largest growers; typically, cherry-picking the absolute finest of what they farm to produce the impeccably crafted wines bottled under their own label.
*2012 Obsession Symphony
*2013 Petite Sirah
*2013 Old Vine Zinfandel
*2010 Reserve "Rous Vineyard" Old Vine Zinfandel 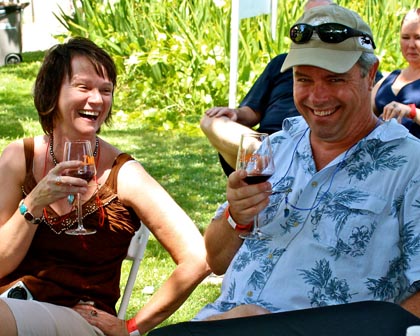 Life is good next to Lodi Lake

Klinker Brick Winery
The Felton family's Klinker Brick wines are now appreciated in most states across the country; a dramatic success story lending credence to the old adage that the proof is always in the pudding – or in this case, in these fantastically rich, round, impeccably crafted wines.
*2012 Farrah Syrah
*2011 Old Vine Zinfandel
*2013 Rosé
*2011 Brick & Mortar Red Blend

m2 Wines
A combination of guts, grit, instinct for unadulterated quality, not to mention a finely honed sense of humor, have all turned m2 Wines, driven by the one-and-only Layne Montgomery, into one of Lodi's most acclaimed boutique sized wineries.
*2012 Century Vineyard Zinfandel
*2012 Old Vine Zinfandel, Soucie Vineyard
*2011 Tempranillo 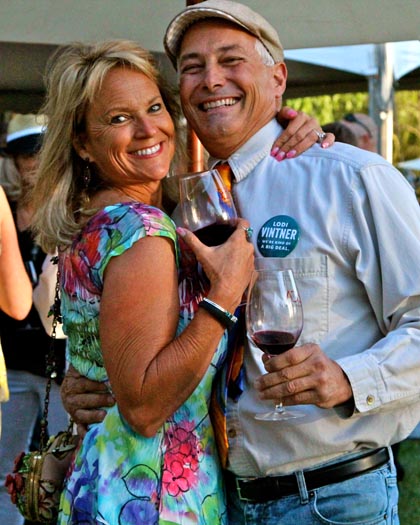 Maley Brothers
If you are into miniscule sized "grower-wineries," a stop at Maley's table is an absolute must: grapes grown by a family who has been in Lodi since the 1860s, now turned into exquisite wines by the widely respected consulting winemaker, Chad Joseph.
*2010 Zinfandel
*2012 Chardonnay
*2011 Petite Sirah

McCay Cellars
ZinFest Wine-by-the-Glass Sponsor!
This producer has been on a roll for going on three, four years; garnering kudos and "Top 100" (in the world) rankings by "cool-kid" reviewers such as San Francisco Chronicle's Jon Bonné. Why the fuss? Don't ask us – stop by and taste for yourself why owner/grower/winemaker Mike McCay's sleek, minimalist approach is knockin' them dead.
*2010 Jupiter Zinfandel
*2013 Rosé
*2032 Tres Blanc
*2011 Truluck's Zinfandel 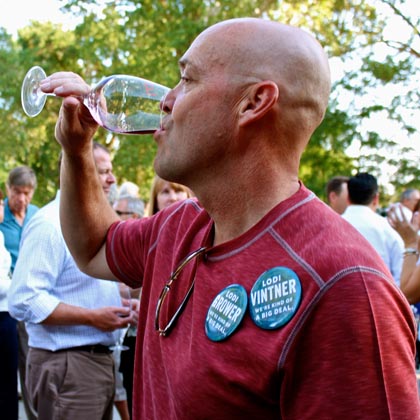 McConnell Estates Winery
The first of the McConnells arrived in the present-day Cosumnes River AVA of Lodi (near Elk Grove) in 1849; and the Wackmans (the other major branch of the family), in 1863. A sixth generation is now involved in these vineyards, producing wines tasting distinctly of Lodi's northernmost, Delta influenced sub-region.
2010 6 Gen Zin
2011 6 Gen Zin
2007 Petite Sirah
2009 Cabernet Sauvignon
2008 Zinfandel

Mettler Family Vineyards
Larry and Charlene Mettler now lead this venerated family, which during the past 115 years has grown to dominate Lodi's east side, where the soil is the sandiest and most porous, producing (arguably) the AVA's deepest, most concentrated wines. The Mettlers proudly hang their hat on a nationally acclaimed Cabernet Sauvignon (they have piles of gold medals to prove it!), and a trencherman's Zinfandel that is second to none.
2011 Cabernet Sauvignon
2011 Epicenter Old Vine Zinfandel 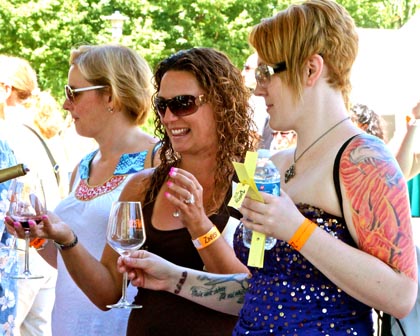 Wine lovers of every stripe at ZinFest

Peirano Estate Vineyards
Despite being a very old estate (established in the 1890s), this is one of the hottest Lodi wineries today; garnering no less than five gold medals (including a unanimously proclaimed double-gold for their Syrah) at the 2014 San Francisco Wine Competition (one of the toughest judgings in the nation)! These are classical, finely balanced styles of Lodi wine, impeccably grown by founder Giacomo Peirano's present-day heir, Lance Randolph.
2012 The Immortal Zin
2011 "The Other" Red Blend
2010 "The Other" White Blend
2012 Reserve Syrah 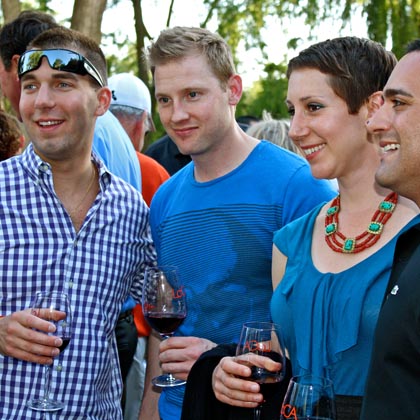 Scotto Family Cellars
A chance to experience the wines of this recently established winery (since 2009), owned by the Scottos – California growers since 1883.
2012 Regio Zinfandel
2011 Regio Malbec
2011 Old Vine Zinfandel

The Dancing Fox
Owner/winemaker Gregg Lewis is one of Lodi's most respected growers, quietly carving out his own style of bright, zesty wine.
NV Firedance White
2011 Sangiovese
20011 Red Zorro
2011 Zinfandel

Toasted Toad Cellars
This is definitely a family run operation; and for the Werters, winemaking is all about family, friends, food and fun.
*2013 Blushing Toad
*2011 Viognier
*2011 Primitivo
*2012 Toadilly Luscious Wine 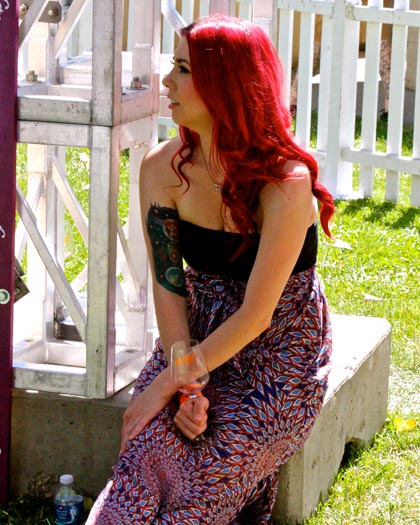 Van Ruiten Family Winery
The Van Ruitens – who own some of the most coveted vineyards on Lodi's west side, extending out into the Delta – also know a thing or two about winemaking.
2011 Glory Days Zinfandel
2011 Old Vine Zinfandel
2012 Zinfandela

Vicarmont Vineyards & Winery
Vic and Carrie Mettler easily produce Lodi's finest Merlot (and who still doesn't like a sturdy, opulent Merlot?) along with a number of other wines in their generous, well rounded house style.
*2012 Chardonnay
*2011 Merlot
*2011 Cabernet Sauvignon
*2011 Zinfandel

What ZinFest is all about…