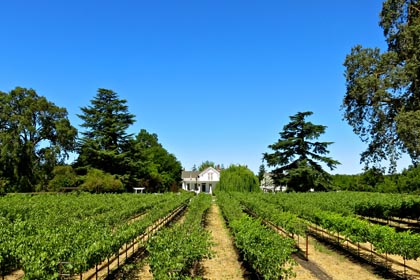 The old Dodge House on Sorelle's estate, fronted by Sangiovese

There’s always one in the bunch.  A newly loosed winegrower, seemingly oblivious to industry trends; making a decision to plant, as his centerpiece, a grape with a solid track record of market disappointment:  California grown Sangiovese. 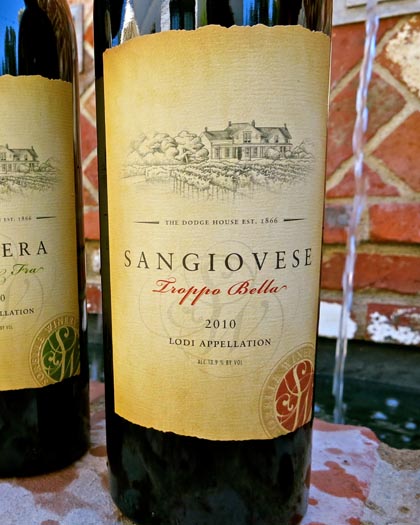 But, boy, are we glad that Mike Scott, owner/grower of the Sorelle Winery estate, stuck to his guns because the first wine made 100% from his vineyard – the 2010 Sorelle Troppo Bella Lodi Sangiovese ($23) – is an unmitigated success:  beautifully focused and filigreed fragrances of black cherry and rose petal in amongst a backdrop suggesting dried herb potpourri; the delicate array of flavors surfacing in a sleekly textured medium body of both delicacy and strength, zipped up by a crackling natural acidity that stops short of being sharp; with moderate strands of tannin woven deftly in between, adding firmness to the feel.

If classic Sangiovese is all about crispness and restraint, and strength with refinement, then the 2010 Sorelle is a Sangiovese lover’s wet dream!

On top of that, there are some delicious, summery fresh residuals:  a 2011 Sorelle Sogno Dolce Sangiovese Rosato ($16), which is a lightly tart, bone dry, watermelon and lemon perfumed rosé style wine; fashioned from the pink colored saignée or “bleeding” of the Sangiovese juice, drawn off the batches of black skinned grapes before they begin to ferment.

Barely five years ago Mike Scott purchased a property he had long coveted, while growing up and living in the area:  the 4 acre site comprising the old Dodge House – a classically columned plantation home (built in 1866) sitting on what was once Jonathan Holt Dodge’s 900 acre farm, located off Hwy. 88 along the Calaveras River, at the southernmost edge of the Lodi AVA. 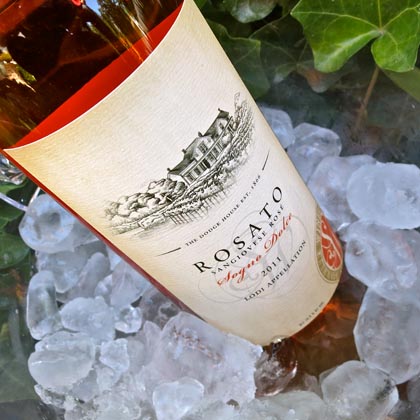 Mr. Scott’s intention was to plant a vineyard and start a winery that his two grown daughters, Kim and Melissa could help operate.  Since their mother, Joanne Scott, is of Italian ancestry, it was decided that planting Italian grapes – particularly Sangiovese and Barbera – would be a good idea, especially since it went along nicely with the name of the winery the entire family picked out:  sorelle, which is Italian for “sisters.”

This, of course, could have easily ended up being a case of putting a cart before the horse.  What would have happened if those Sangiovese and Barbera grapes ended up making disastrous wines, and the Scotts regretted not calling their winery sœurs and planting French grapes like Cabernet Sauvignon and Merlot instead?

Fact of the matter, Mr. Scott also did his due diligence.  Even before the pre-existing walnut and cherry trees surrounding the old house were pulled out to make ready for vines, local agricultural services were called in to properly survey the property.  They found that the soil on the north side (in front of the house) was a nice mixture of a clay loam and a coarse sandy loam similar to the Tokay sandy loam dominating the rest of Lodi’s Mokelumne River AVA.  However, on the south side, closer to the river (which, today, is more like a creek), the water table is a little higher, and there the clay loam is mixed in with more silty, alluvial material.

While no fine wine grape excels in overly fertile soils – excess soil vigor causes heavy canopies and overcropping, generally leading to weak tasting wines – there has been a history of Barbera in both Italy and California being grown successfully even in moderately rich clay loams; and so the decision was made to plant Sorelle’s Barbera in the creek bed closer to the Calaveras. 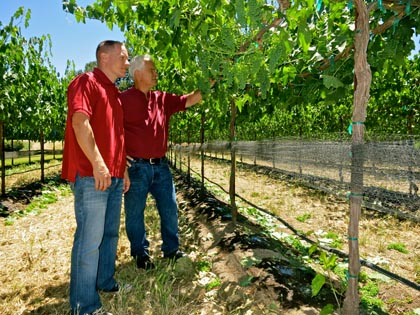 Sangiovese, on the other hand, is notoriously vengeful when grown in vigorous soils:  in overcropped situations, Sangiovese’s pigmentations and anthocyanins – never high to begin with – get even weaker, leading to thin flavors and souring acidity.  This is why virtually all the great Sangiovese grown in its native Tuscany pretty much resides on famously spectacular, rolling hills of low vigor shale, clay and limestone.  However, sand has also always been known to reduce vigor; and so it stood to reason that Sangiovese could have a fighting chance to perform in the sandy/clay loam soil lying directly in front of the old Dodge House.

Going by the quality of the wines:  so far, so good!  But this has been due not so much to good fortune as sheer “effort,” according to Sorelle’s consulting winemaker, Chad Joseph.  “The Scotts have worked extremely hard to make sure the wines are very table friendly, expressive and true to variety, taking pride in paying attention details in the vineyard, hand harvesting, and employing minimal processing before the wines are pressed and put to barrel.”

Well balanced quadrilateral trellising, ruthless shoot and cluster thinning (during a visit in mid-June, we saw as much fruit dropped to the ground as there was left on the vine), leaf stripping, deficit irrigation, bird netting, picking earlier for a balance of acidity and moderate alcohol, and choosing largely neutral barrels to emphasize fruit, not wood, flavors:  all of this has contributed to textured, complex yet sleek, friendly fruit qualities that have been largely missing in most Sangioveses produced in California over the past 20 years.

What has been the issue with California Sangioveses of the recent past?  Although the name (if you want to sound Italian, say it as sahn-joe-VAY-zeh) derives from the Latin words sanguis Jovis, “the blood of Jove,” what’s been grown here hasn’t exactly yielded wines as “thick as blood.”  In fact, the opposite… 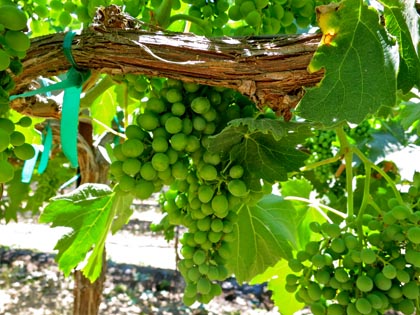 In the late nineteenth century scattered bits of Sangiovese were planted, primarily in Sonoma and the Sierra Foohills, by early Italian immigrants.  Yet for some reason, other than Barbera, California winegrowers never really demonstrated a lick of interest in any Italian grapes.  Instead, Zinfandel – hardly a major grape in Italy (in fact, an obscure one, grown in relative anonymity in Southern Italy and nearby Croatia) – became the primary grape of choice among the old Italians.  The lack of enthusiasm for Sangiovese almost defies explanation, considering

Nevertheless, it was not until the start of the nineties that plantings of Sangiovese in California reached 200 acres; probably as a result of publicity generated by Italy’s new style “Super Tuscan” wines, which started to heat up in the eighties.  In 1991 the Los Angeles Times proclaimed Sangiovese to be “Napa’s Next Grape of Destiny,” in an article reporting on 120 acres of the grape planted on a 1,200 acre ranch on Atlas Peak purchased by Piero Antinori, one of Italy’s Super Tuscan pioneers (most famously:  Tignanello and Solaia).

By 2003 plantings of Sangiovese around the state rose to 3,000 acres; but even by then, it had become clear that consumer interest in so-called “Cal-Ital” wines was puttering out; and lines like Robert Mondavi’s La Famiglia di Mondavi, driven by varietal bottlings of Pinot Grigio and Sangiovese, soon headed for the scrap heap. 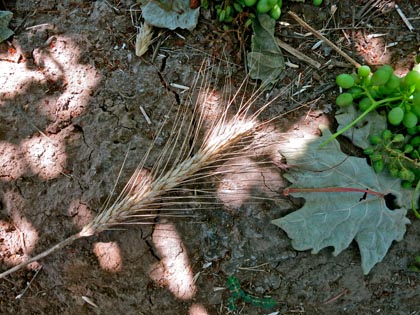 Today, California’s Sangiovese plantings hover closer to 2,000 acres:  many of the vineyards that were enthusiastically planted in the nineties ended up being pulled out, as winegrowers came to the bitter conclusion that either poor clonal selection or ill advised sites were yielding nothing but thin, indifferent wines that, for good reason, weren’t wowing consumers.

Will Sorelle defy that trend?  Mr. Scott seems confident enough.  Although the wines are speaking for themselves, he recently told us, “we are stepping up our game.”  With two harvests (2010 and 2011) under his belt, Scott says, “we are learning to anticipate the vineyard issues – thinning bunches not only to get the right balance of grape and canopy, but also so that none of the clusters touch each other, which will minimize bunch rot and give us more even ripening.”

In the winery – a low key structure set inconspicuously behind the Dodge House – Scott will be implementing a sorting line that will do more than sort clusters, but also do more meticulous berry-by-berry sorting, making sure everything reaching the fermentor is absolutely perfect… immaculate.

Yet, amazingly, we’re talking about a below-$30 wine.  Well, that’s Lodi for you; where sensible winegrowing leads to equally sensible packaging.  But it’s also due to the pride, focus and attention to detail of the Scott family – something bound to change the way we all think of American grown Sangiovese! 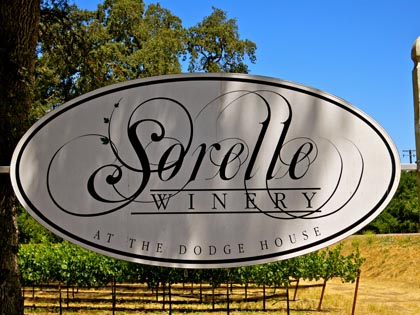