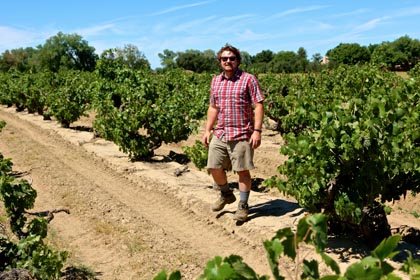 You see it in films, fiction, music, reality television, and even in the wine world: everybody loves the scruffy character with the countenance of youth and artistic soul, even when it comes with forgivable hints of bravado or brashness. Enter-stage-left, Morgan Twain-Peterson, owner/winemaker of Bedrock Wine Co. in Sonoma Valley.

Over the past six, seven years Mr. Twain-Peterson has emerged as one of California's wunderkind winemakers, with one of the most distinctive feels for terroir. In the beginning, because of his promising bloodline, as the son of Ravenswood founder/winemaker Joel Peterson; and with that, access to many of the most coveted vineyard sites in the North Coast.

Then there is his currency with the cultivators of "cool" among the wine cognoscente; especially influential journalists such as San Francisco Chronicle's Jon Bonné, who has closely followed Twain-Peterson's "crusade to bring glory to Sonoma's old red field blends," plus his work with white wine grapes producing "equally complex and engaging wines." The New York Times' Eric Asimov has weighed in several times; lauding Twain-Peterson's "style points" – particularly his touch with old vine reds that are "simultaneously powerful, richly fruity yet agile and well balanced." 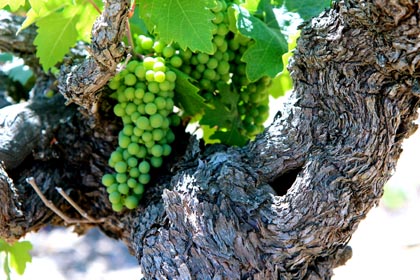 So why, in Sam Hill and all that is holy in this world of $25,000 per ton Napa Valley Cabernet Sauvignon, would Twain-Peterson pick the Lodi AVA to invest in the first vineyard property of his very own? Up until this year, Twain-Peterson has worked his magic strictly with other growers' properties; including the Stampede Vineyard in Lodi's Clements Hills AVA, farmed by owners Jeff and John Perlegos (who also farm Zinfandel on Davis Rd., south of Sargent).

In a conversation over Ortega burgers at Webster's Country Drive-In in Clements yesterday, Twain-Peterson was bullish about his recent purchase of a 10-acre vineyard on Schmiedt Rd., which came with some seven and a half acres of mostly own-rooted, head trained Zinfandel – planted somewhere 1915 and 1920 – with smatterings of Carignan and a Tokay plant or two.

Says Twain-Peterson, "First, I would never have discovered the property without Tegan Passalacqua" – in reference to Turley Wine Cellars' manager/winemaker, who set a precedent in early 2012 by purchasing the Kirschenmann Vineyard, located right across Schmiedt Rd. from Twain-Peterson's newly acquired property. 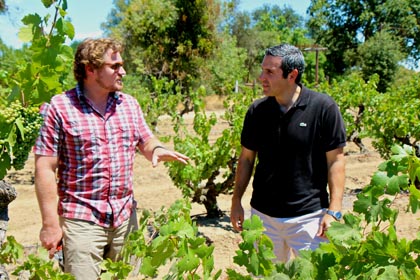 This busy little pocket of Lodi's Mokelumne River AVA, tucked into an east side bend of the winding Mokelumne River off Bruella Rd., is occupied by other company of very good standing: just next door to Twain-Peterson, Jean Rauser's +100-year old Carignan vineyard (sourced by Lodi's Klinker Brick and McCay Cellars, as well as the Napa based Odisea/Cochon Wine Company); and on the other sides, the late great Ross Schmiedt's Dairy Vineyard (old vine Zinfandel bottled as "1918" under the Twisted Roots label, and also going to Turley Wine Cellars), Michael McCay's Lot 13, and just to the south of Kirschenmann Vineyard, Kenny Schiemerer's old vine Zinfandel (used by Patrick Campbell of Tierra Divina in his !ZaZin and REDS bottlings). 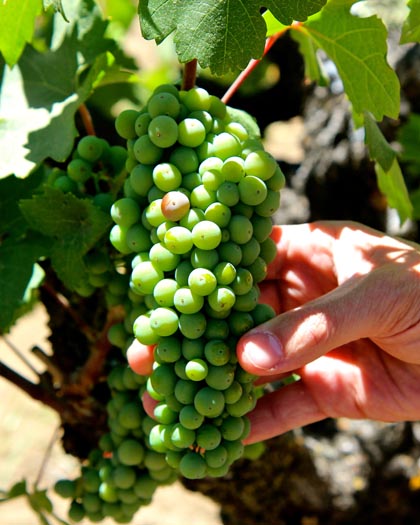 Twain-Peterson continues his story, in his usual bright eyed, bushy tailed yet globally cognizant fashion: "After making wine from Kirschenmann in 2012 and 2013, and from Stampede Vineyard in 2013, I came to appreciate the structure of Lodi Zinfandel, which is deceptively soft but very lifted, almost like crus Beaujolais, and also like Nerello Mascalese from Sicily, and other red wines growing in sandy soils in Greece, Corsica, and parts of the Rhône Valley.

"I don't look upon Lodi Zinfandels as brash, deep colored wines, like what we get in Sonoma and Napa. In Lodi it's about fine (Tokay) sandy loam, which means it's more about finesse and perfume, brightness, elegance. Almost the opposite of what we get in the red clay soils in Sonoma Valley vineyards like Monte Rosso, where wines come out burlier, with much more tannin structure. I like Lodi precisely because the tannins are softer – makes wines that are more approachable in youth, yet very compelling."

Twain-Peterson is calling his Schmiedt Rd. property Katusha Vineyard; which, he explains, is Russian for "Katherine." Twain-Peterson tells us, "It's Katusha because the vineyard came up for sale two days before Mother's Day (in 2014). My stepmother's mother, who is of German and Ukrainian descent, is named Katusha, and my mother is named Katherine. It also feels right because of the German influences here in Lodi – the Kirschenmanns, the Schmiedts, the Kettlemans…"

Twain-Peterson, as it were, had to come up with the full asking price for his 10-acre Katusha property because of the need to outbid other offers already on the table. "I happened to be checking out Kirschenmann Vineyard last May when I saw the 'for sale' sign across the road. I love the Zinfandels coming off of Kirschenmann, and I could already see the huge potential of Stampede Vineyard, which Jeff and John Perlegos are steadily bringing up to speed. So I knew the potential quality of Katusha – I think, as good as anything we work with in California. But we had to get aggressive after finding out that other people were making plans to pull up the old vines and turn it into a walnut orchard.

"Just looking at the way it was being farmed, without a whole lot of detail, you could see that the expectation was that the vines would be torn out. Part of the motivation was because of my association with Historic Vineyard Society, so I'm already inclined to care deeply about old vines in danger – these are stories that kind of pulls at the heartstrings. The other part of the equation is that I saw the opportunity to acquire a vineyard of my own – my very first, ready or not." 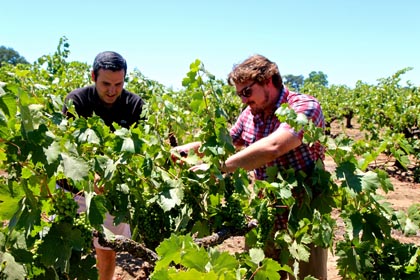 "Katusha will take a lot of work, especially the first two years. There is eutypa (i.e. dieback or "dead arm" disease), at least an acre of missing vines, Bermuda grass and Johnson grass coming up the waz, and the nematode issues common to vineyards that have been traditionally furrow irrigated. We're planning to put in sub-surface irrigation to make organic cultivation easier, and we'll go to work trying to re-shape the vines to more ideal goblet training, with single crowns."

In Sonoma County and Napa Valley Twain-Peterson has established a track record of championing traditional field blends, while eschewing vineyard varietal monogamy; and he has supervised the cultivation or replanting of as many as 22 other grape varieties in old vine sites dominated by Zinfandel. But he is making no such plans for Katusha Vineyard.

Says Twain-Peterson, "I mapped out the vineyard, and it's about 99% Zinfandel. Lodi is not the freakshow we put on in Sonoma. It seems more Germanic here. So we'll stick to the tradition – the history of what we can clearly see has worked in the past – by sticking to just a couple more varieties, like Carignan, Grenache, and maybe Alicante Bouschet. This will give me the acid I like to play up in a Zinfandel. We’ll plant mostly Carignan in the empty spots near the river; but in the end, I don't see 'other' varieties adding up to more than 5% of Katusha."

But make no mistake: this young, hirsute wine producer fully acknowledges that his plans for being fully invested in the Delta – through not only Katusha but also Stampede Vineyard, which has become Twain-Peterson's single largest source of Zinfandel in the state, plus possible future work with west-side Lodi vineyards ("I'd love to explore the subtle differences in sandy loam," he tells us) – will be adding to "the bigger conversation about Lodi."

Says Twain-Peterson, "There is a movement already started by other producers, and people like Tegan Passalacqua, towards changing the culture here, from grape growing to winegrowing. I understand the cycle of necessity – the need to farm a certain way to supply grapes to larger producers – because that's how you put food on the table. My family (with Ravenswood) has been part of this for long time.

"But I want to be part of that other movement that will finally show the true potential of Lodi – wines that I think are as fine as any that can be produced in California." 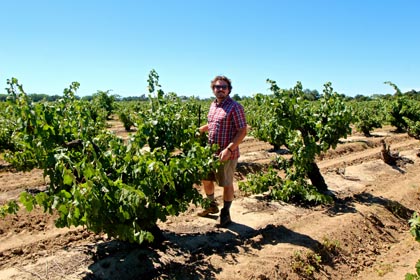 Morgan Twain-Peterson in his Katusha Vineyard