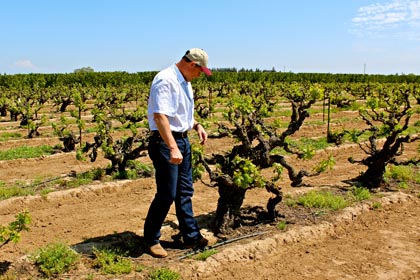 One of Lodi’s most highly regarded Zinfandel growths over the past dozen or so years has been the 10 acre vineyard owned and meticulously farmed by Craig Rous.  Rous Vineyard is located in the heart of the “eastside” of Lodi’s Mokelumne River AVA – a level pocket of some 30 feet of porous sandy loam soil, built up by millenniums of overflow from this major waterway, pushing down from the Sierra Nevadas – and Mr. Rous himself holds the position of Director of Operations & Planning of the Kautz family’s Bear Creek Winery. 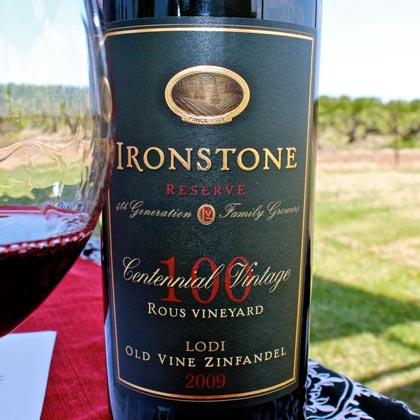 “It’s a very old (planted in 1909), low yielding vineyard that always seems to produce perfectly balanced wines,” says Holdener, “it’s never a jammy fruit bomb – always extremely concentrated yet very refined.”  Holdener adds, “this is the profile of the area, because the sandy soil is especially deep in this part of Lodi, but it’s also because the vineyard has the advantage of being farmed by someone who is a winemaker himself.  Craig understands the vineyard as winegrower, not just a grape grower, and so everything is balanced.  Leaves are pulled and clusters are never touching each other – each vine in perfect proportion, which makes things so much easier for us as winemakers.”

Says Mr. Rous, “the vineyard has the classic ‘beach sand’ of eastside Lodi.  The roots go very deep, probably because it was dry farmed when it was first planted over 100 years ago – something that was possible to do because the water table was much higher then, before the rivers in the area were dammed up and waters diverted elsewhere (today Rous Vineyard is deficit irrigated with drip hoses).

“When I bought the vineyard in 1994 it was being furrow irrigated because it was farmed for White Zinfandel – yields were twice as much as what we farm for today (5½ tons/acre, as opposed to 2 to 2½ tons), and it was no problem getting the grapes ripe since you pick for White Zinfandel at around 18.5°, 19.5° Brix (today’s red zin producers shoot for sugar readings closer to 25° Brix).” 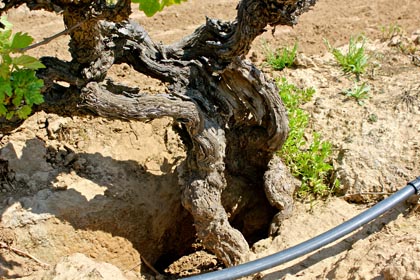 Hollowed out trunks and "beach sand" soil of Rous Vineyard

Mr. Millier tells us, “Rous Vineyard is always one of our first vineyards picked every year.  It never has any problem reaching full flavor maturity by 25°, very rarely with any raisining or other issues.  We’re able to produce Zinfandels in the 14% alcohol range – never too big or over-the-top.”

In respect to historic significance, Rous Vineyard was probably the first vineyard planted in Lodi on St. George rootstock.  This is unique because the majority of Lodi’s pre-1960s Lodi Zinfandel vines were planted on their own rootstocks; many them still thriving today because the Mokelumne River AVA’s sandy soil (similar to sandy soils in nearby Contra Costa, in parts of Santa Barbara, Eastern Washington and Chile) have kept them pretty much free of phylloxera – the root louse that destroyed most of the vineyards in Europe as well as on California’s North Coast during the latter half of the nineteenth century. 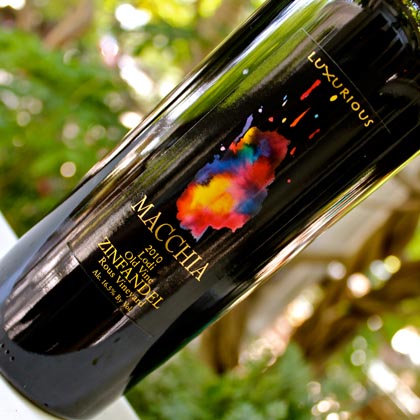 If you know your wine history, you will recall that phylloxera first hit Europe during the 1850s via American plants collected by avid botanists in Victorian England.  Native American grape vines have always been pretty much immune to these sap sucking insects; but not so European vines, the Vitis vinifera from which all the classic wines – Cabernet Sauvignon, Merlot, Chardonnay, Pinot Noir, Riesling, et al. – are made.

Once vineyards began to die off, and the problem identified, it became apparent that the only feasible solution was to graft native European vines onto stumps of phylloxera resistant American vines.  The grafting of buds onto plants providing suitable root systems, of course, was nothing new to horticulturists – the practice, especially for fruit and nut trees, was known to the ancient Greeks, and in China even before 2000 B.C. – but winegrowers in Europe had to scramble very quickly to convert virtually their entire industry to this.

The use of the rootstocks of an American plant called Vitis rupestris became very popular in the area around the Southern French town of Saint-Georges’d’Orques, and so in the 1890s rupestris – renamed St. George – was introduced to Californians, who took to it very well because this plant provided deep rooting systems, proving to be very effective in poor soils, and in areas prone to droughts.  Interestingly, Vitis rupestris is not actually a grape vine, it is a grape bush that once grew wild on prairies, and in gravelly creeks and sand bars, all over central U.S. (from Texas to West Virginia), and is now listed among endangered plant species.

Today, many viticulturists and winemakers say that Zinfandel is the one variety of Vitis vinifera that grows best as a single-head trained plant – very much like a free standing bush – rather than on a trellis, and that St. George still makes the best possible rootstock, as good or better than Zinfandel’s natural rootstock.

Macchia has just released its 2010 Luxurious from the Rous Vineyard, and in late spring Ironstone will come out with a 2009 Reserve under a Centennial label commemorating the vineyard’s hundredth birthday; both wines representative of the phenomenal quality inherent in this venerated vineyard:

2010 Macchia, Luxurious Rous Vineyard Lodi Zinfandel ($28) – The Macchia style is significantly bigger (over 16% alcohol) and more pedal-to-the-metal than Ironstone’s, yet the texture in this bottling is satiny smooth and fleshy with glycerol, gripping the palate with juicy sensations, revved up by the fresh, wild raspberry aromas sweetened by the vineyard’s characteristic floral/violet-like perfume. 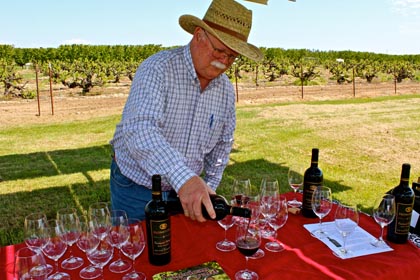