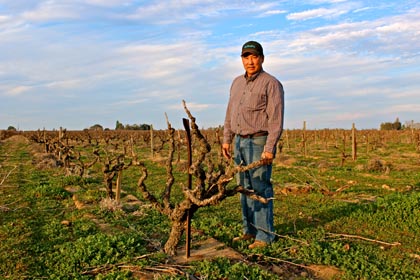 Leland Noma, in one of his classic old head trained Zinfandel vineyrds

Leland Noma, says Tim Holdener, winemaker/proprietor of Macchia Wines, “is one of Lodi’s premier growers… always agreeable, and a really good partner.”  Holdener adds that Noma also grows “some of the highest priced grapes in Lodi,” but he’s not complaining.  Especially when you consider the consistently award winning acclaim Noma’s grapes have won for Macchia:  particularly for Holdener’s Outrageous Zinfandel – sourced from a shining relic of a 100+ year old vineyard farmed by Noma along Victor Road, just east of the town of Lodi – as well as for a Barbera supplied from a 42 year old vineyard kept on something of life support by Noma’s stubborn labors.

According to Holdener, it takes a special kind of farmer to devote himself to the Zinfandel vines like that of Noma Ranch – half of which are so tiny and stunted, they are producing as few as two or three clusters per vine, from practically prostrate positions.  “The grapes are becoming more and more concentrated as the years go by,” says Holdner.  “It usually takes us two or three pickings to get them all in each year, since the perimeter of the vineyard ripens sooner; and the middle, where the vines are larger and more vigorous, can take as long as a month longer to ripen. 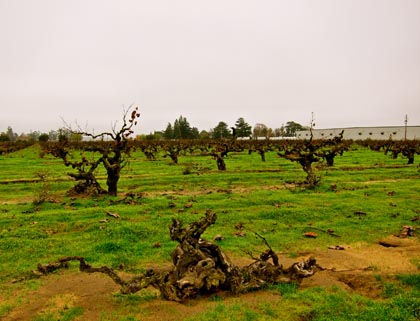 Zinfandel in the turn-of-twentieth-century Noma Ranch

“Whether it’s the age of the vines, the tiny cluster or berry sizes, or the vineyard’s unique clonal selection, for some reason Noma Ranch Zinfandel always comes in with a lower pH and higher acids than all our other Lodi Zinfandels.  We’ll produce about 50 barrels each year, 10 of which will go into Outrageous Zinfandel, and the rest forming the backbone – because of their great acid component – of our Mischievous Zinfandel.

True to form, the recently released 2010 Macchia Outrageous Noma Ranch Lodi Old Vine Zinfandel ($24) is a lavishly rich, sticky, lip smacking, chocolate covered wild berry mound of a red wine; and at 16.3% alcohol, not for the faint of heart.

From Noma’s landmark Barbera planting:  the 2010 Macchia Delicious Lodi Barbera ($20) has the zesty edged meat and sinew of the varietal, along with mouthwatering blackberryish fruit intensity with sweet, almost maple-like taste and viscosity.  100% from the same vineyard, Barbera lovers can also find a 2009 d’Art Wines Lodi Barbera ($24) that is as zesty as Macchia’s; but picked at slightly lower sugars (as is winemaker/owner Dave Dart’s wont), a bit sleeker in texture, and more finely polished in its black fruit expression. 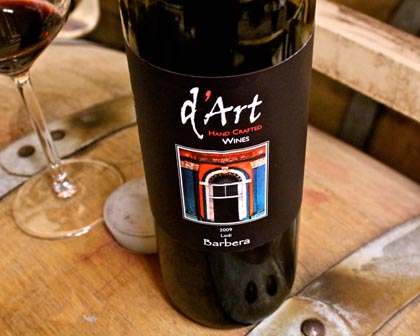 Much of the unexpected concentration of this Lodi grown Barbera, Holdener explains, is due to the fact that the vines in Noma’s vineyard are over 40 years old.  “It’s an old, tired, struggling vineyard that produces less than 2 tons per acre, sometimes closer to 1 ton.  Frankly, more sensible growers would have pulled it out long ago, but Leland has kept at it.  In fact, he’s brought the vineyard back to life – practically resurrected it – by continuously reworking the trellising.  Somehow he gets it to set enough grapes to balance the canopy, and the grapes come out tasting like these marvelous, sweet, little black/purple tarts.”

Curious about what goes on in the head of such a persistent grower, we sat down in early February to chat with Mr. Noma.  Despite being your typically reticent, soft spoken farmer, he opened up enough to provide fascinating insights into the world of Lodi grape growing – past, present, and maybe future.  In the words of Leland Noma:

We lease the 15 acre old vine Zinfandel vineyard next to Oak Ridge Winery from Rudy Maggio, of one of Lodi’s old-time winegrowing families, who at one point thought about pulling it up.  In the old days it was called Pope Ranch, but in his single vineyard wines Tim Holdener has been calling it Noma Ranch.  Whatever you call it, it’s not a high yielding vineyard.  I usually break even, but recently it’s probably better described as my “loss leader” – in 2010 we got only about 17 tons, and in 2011 less than 12 tons.

Where Dart Container is now (on the other side of the vineyard from Oak Ridge, where foodservice packaging products are processed), it used to be all Tokay vines, which were removed in the early eighties.  Thanks goodness, most of the Pope Ranch Zinfandel was left in the ground; although easy access to water has been cut off, and so the vineyard has been dry farmed the past twenty or so years. 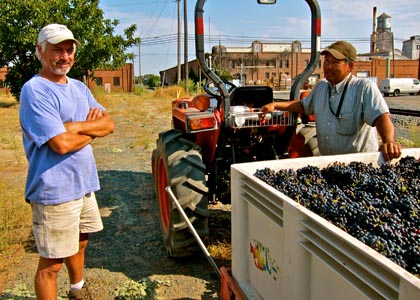 I am a second generation Lodi grower.  My dad started farming strawberries and grapes in the fifties – but he didn’t grow wine grapes, just strictly Tokay.  My brother Glenn (older by two years) and I took over the business in 1980.  We worked as partners until 1988, and then he moved down to Watsonville to farm strawberries there.  In the late eighties, we were one of the last ones to grow and pack Tokay.  Now all we have left is about 80 vines around my mom’s house, which she likes to pick at for herself, family and friends.

Transitioning to Zinfandel was a natural thing to do because, like Tokay, Zinfandel is perfect for Lodi’s moderate climate and sandy soil.  You couldn’t get the proper color, for instance, growing Tokay in Fresno, and it would be too cold in Watsonville.  It’s the same for Zinfandel, and practically all wine grapes:  in Lodi, the soil is rich enough that you can get just the right amount of color and flavor.

I’m even luckier to work on the east side of Lodi, where the sand is so sandy that water goes straight down, whereas in parts of the west side the water table is higher, and the soils can get mucky or hard when it’s wet.  So it’s easier for us to get our equipment into vineyards when it’s raining, either early in the season or in October, when we don’t want the rain at all and we’re scrambling to get the grapes in before they rot. 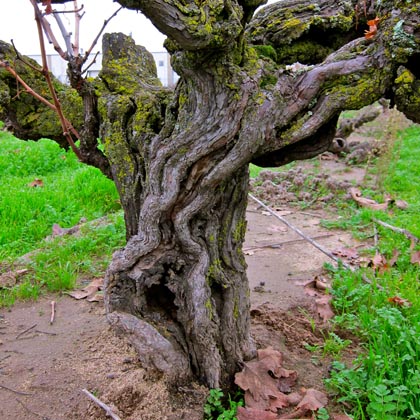 Altogether, we farm about 240 acres in Lodi today – mostly wine grapes, although a little bit in cherries.  Like my dad, I either own or lease vineyards; including a good 35 acres of a low yielding, head trained 50 year old Zinfandel vineyard, once known as the Young Ranch, which we have been rehabilitating.  It goes mostly to a big zin producer, but Tim likes to use some of this in his Mischievous blend.

The reason I got to know Tim is because I also have Barbera – a 10 acre vineyard planted around 1970, originally called the Kearl Vineyard – which produces beautiful fruit.  This was when Tim was just starting up Macchia, without a lot of money.  The first year I offered him a ton to work with, and told him, “go ahead and make some wine from it – if you sell it, then you can pay me for the grapes… if not, then you can just give me some wine.”  Tim didn’t have trouble selling the wine.  And then the 2007 vintage was entered into a competition in Italy and earned an award for “Best Barbera Produced Outside Italy.”  I think they won that award a second time, too.

The 2006 Macchia Noma Ranch Zinfandel won “Best of State” in the California State Fair, and it was a pretty big wine.  Winemaker styles have definitely changed over the years.  In the eighties we used to pick grapes around 23° Brix (i.e. a measurement of grape sugars), and we were practically done with harvest by end of September.  In the nineties, it crept up to 24°, and these days they’re asking for anywhere from 24° to 26°, and it’s taking ‘til the end of October to get everything in.  Sugars can be even higher than that because, here on the east side, grapes can ripen very quickly in these deep, sandy soils. 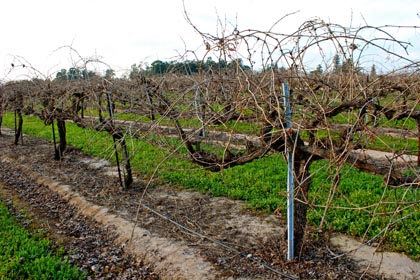 For example, some of our big winery clients send out their people out to inspect the grapes, which they want picked strictly “for flavor,” not sugar readings.  The problem is that late in the season, grapes ripen so quickly, especially when they start to shrivel, by the time they reach their “peak” the wineries are already inundated, and they’re not ready to take the grapes.  So they wait, and when they finally do get the grapes in, the sugars are higher than what they may have wanted.  This is why you’re seeing all these high alcohol Zinfandels these days.

Tim at Macchia, on the other hand, is a small producer right here in Lodi, and so we’ll get the grapes picked for him at pretty much the exact time he wants them.  How different is it working with Tim?  Eight, nine years ago I went to a stockholders’ meeting held by one of my big winery clients, and they were referring to Lodi as “château cash-flow,” because our prices were so low but quality was way up there.   They were bragging to investors how they could buy and sell Lodi wine all day.

But things are changing for us in Lodi.  Demand for Zinfandel is way up.  Wineries who don’t usually bother talking to us until grapes are practically falling to the ground are now coming to us at the beginning of the year.  Not only that, they’re talking 5 year contracts.  Just three years ago, it was “we’ll get back to you,” or they didn’t want the Zinfandel at all!  It’s kinda crazy how things how things are turned around, but I’m not complaining… 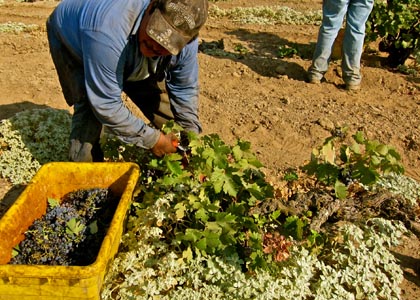 Especially since expenses have been going up, and labor has been getting crazy, too.  You have to remember that I work mostly with old vineyards that have to be picked by hand.  There were a lot of days in 2011 when I could only pick half of what I needed to pick because there just weren’t enough pickers.  The pear season was running late, the packing sheds were still busy, and on top of that, the INS was rounding people up – even the contractors were having trouble finding laborers.

I don’t know what the solution is, but this a problem that won’t go away by itself.  More and more of our laborers are setting down roots – no longer moving from crop to crop – or else they’re being charged outrageous sums by coyotes just to come across the border, which is bad enough.  What people don’t quite get is that Americans are not going to do this work – even Hispanics who are born here won’t do this work.  No one is taking jobs away from anyone, and we still have a job that needs to get done.

Still, things are looking up for growers like me, which I’d describe as “middle-of-the-road” – large enough to have my own equipment, but small enough that I need to hire crews throughout the year.  The last two years crops have been on the light side, and now wineries are in greater need – it’s a great time to be a farmer in Lodi! 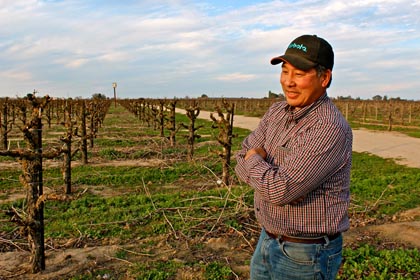