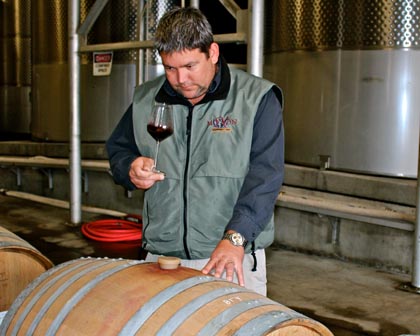 If there was a wine he would want to drink every night, according to JC van Staden, the winemaker at Lodi’s Peltier Station, it would be one like the 2006 Peltier Station Reserve Lodi Teroldego ($35).

Peltier Station’s Teroldego is, as Old World wine enthusiasts might say, a “banker” – meaning solid, stolid, and dry as a miser’s heart – and as such, one that combines award winning charms (garnering a gold and “Best of Class” at this past January’s 2012 San Francisco Chronicle Wine Competition) with some serious caveats.

The charms:  a deep ruby color, as dark as blood, followed by a concentrated nose of dried trail mix (dates and berries) and notes of leather straps and steeping mocha espresso wrapped up in a densely textured, upbeat, full bodied taste. 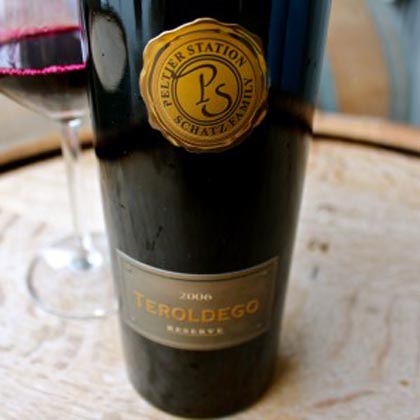 The caveats:  this is a red wine for people who like their coffee bitter, their meat raw, their liquor uncut, their cars muscled, their cheeks unshaven, body parts pierced or tattooed under (as Sheryl Crow once sang) “lights so bright, palm sweat and blackjack on a Saturday night.”

Says van Staden – a rough cut of a vigneron himself, originally from South Africa, and who has been at Peltier Station since its start-up ten years ago, following a stint at Michael-David – “growing and making Teroldego is unusual enough, but I don’t think there’s one even in Italy that comes close to the strength of ours.”  While normally made into a dark, sturdy, zesty red wine in its native Northern Italian region of Trentino-Alto Adige/Südtirol, Peltier Station’s interpretation definitely walks a wild side.

Why grow Teroldego in the first place?  The grape is all about Peltier Station owner/grower Rodney Schatz.  Says von Staden, “Rod likes to do the Kansas City Shuffle – when everyone looks left, he looks right.”  Schatz also revels in “chancy” Italian grapes like Teroldego and Vermentino (much of the latter, a minerally fresh white wine grape, bottled under Jim Moore’s Uvaggio label) because his family on his mother’s side hails from Italy.  “I like to think of Teroldego as a grape born in Italy, but perfected in Lodi,” beams von Staden. 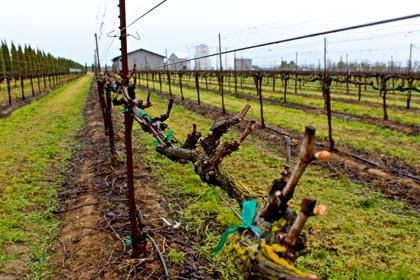 Three-quarters of an acre of the grape went into the ground in 2002 at the entrance to Peltier Station, alongside the railroad tracks paralleling Kennefick at Peltier Rd., just north of the winding Mokelumne River in a deep pocket of Tokay sandy loam.  “Teroldego is a big buncher and heavy yielder,” says van Staden, “capable of giving 10 tons even after thinning.

“The ‘06 was our second vintage – we’ve been making it every year, and if anything, as the years go by the wines get darker and even more intense.”  As evidence, van Staden pulls out a 2011 from barrel for us to taste:  a wine so thick and black – like essence of grape skins and seeds without the watery pulp – that you swear it could lubricate a Hemi.

The wines have been spending anywhere from 28 to 36 months in medium-toast French oak to tame its tannins.  Because it is not your typical Lodi grape – usually attaining flavor maturity before hitting 25° Brix, and therefore finishing at just over 13% alcohol – van Staden feels that it is just as expressive of terroir as it is of the grape.  Teroldego, he says, “always taste like soil, and I should know – I grew up on a farm and rode a lot of cows in my life.”

Mr. van Staden recommends that a Peltier Station Teroldego be decanted to loosen it up before serving.  “Think of it as a cross between Barbera and Petite Sirah – it has the acidity and fruit of Barbera, but the tannin and structure of Petite Sirah.  This makes it slow to open up, which is uncommon to Lodi, where grapes ripens so well they usually makes soft, fruity wines that don’t age very long.  Our Teroldego is more of a put-it-away/drink-it-for-your-anniversary type of wine.”

So much for the Lodi reputation for fruity, easy drinkin’ wines.  Making no bones about it, van Staden says, “Teroldego may not appeal to every consumer, or to critics who are so easily impressed by residual sugar wines.  It’s one of those wines that, if we can’t sell it, we’re happy to drink it all up ourselves.” 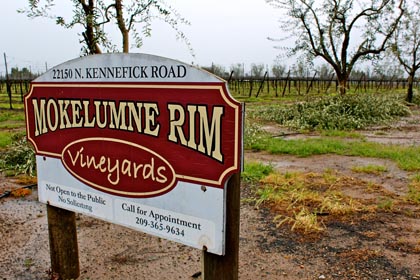