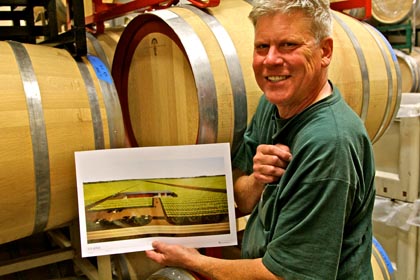 For the past eight years, the compelling quality of m2 Wines has been all the impetus Lodi wine lovers have needed to beat a path to winemaker/proprietor Layne Montgomery’s unadorned warehouse/winery, on the far eastern side of town along Turner Rd.

Nonetheless, Montgomery thinks it’s high time that he makes a move into a “real winery.”  Thus, Montgomery and his original group of partners and investors have announced plans to break ground – as early as this December, if weather and permitting goes well – for a new m2 estate on a triangular 17 acre site south of Peltier Rd., just west of Hwy. 99 along the railroad tracks.

Plans call for a sleek, low-slung wine production facility connected to a tasting room with oversized sliding doors allowing for open air tasting, surrounded by Zinfandel vines (still to be planted on the currently fallow property).  “When we have visitors, I want them to feel like they’re in a working winery, not an entertainment center,” says Montgomery; adding, “I want to make wine and sell it, not host weddings and concerts.  Optimistically, we could be crushing grapes on Peltier Rd. in 2013, but we’ll see how it goes.” 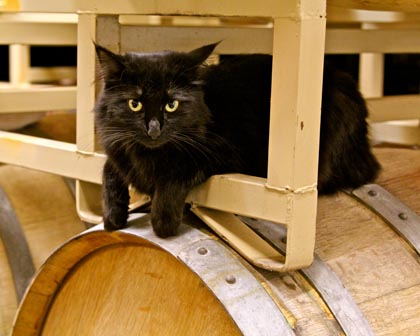 This might be music to the ears of wine lovers who are in it mostly for the wine, not the scene, and who may be tiring of the “ghetto-chic” setting of the current m2 home.  Montgomery also admits that, for the new place, he will be applying for the maximum number of special event permits as well, in order to participate in the usual calendar of Lodi wine country events. 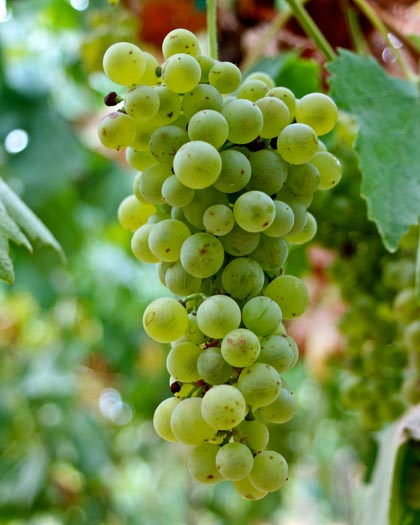 For the new m2 estate plantings, Montgomery is planning to utilize cuttings from Soucie Vineyard – his primary source of Zinfandel since 2000.  “That would be the ideal,” says Montgomery, “because Soucie is in a class all its own.  Even Kevin Phillips (of Michael David Winery) says that Soucie consistently comes out on top, year in and year out.  We don’t work with nearly as many vineyards as Michael David, but it’s good to know they think the same thing.”

Our last visit with Mr. Montgomery (this past October 22) was also a good time to catch up on the latest developments at m2.  First and foremost, a brand new white wine for m2, hitherto known only for ballsy reds:  a 2012 Torrontés, picked this past mid-August from Ron Silva’s acclaimed Silvaspoons Vineyards in Lodi’s Alta Mesa AVA.  One taste of the settling, unfiltered, golden colored juice – bursting with tropical flower, grapefruit and pineapple fruit qualities, tasting bone dry and tart edged, while fleshy and flush in exotic fruit qualities in the mouth – told us that this could very well become a signature white wine for m2, and maybe Lodi in general.

“We’d been looking for a white wine unique enough to mean something special,” says Montgomery, who also did his homework before tackling this exotic grape – including, picking the brain of veteran winemaker Ken Volks (of Kenneth Volks Vineyards in Santa Barbara, and former owner of Wild Horse Winery), whose Torrontés took “Best White Wine in California” honors at the 2012 California State Fair.

“I sampled one lady on the Torrontés the other day,” says Montgomery, “and she came up with aromas like litchi or lychee, and mangosteen.  I have no idea what those fruits are, but it sounds like we may have a winner here.”

During the weekend before (October 20-21), Montgomery had just received the last of his 2012 Zinfandel crop from Maley Vineyards and Mohr-Fry Ranches – nearly six weeks after receiving his first bins of Zinfandel from Soucie Vineyard as well as a “new” old vine planting he is splitting with Fields Family Wines for the first time this year – a 107 year old vineyard located on Kettleman at Alpine they are calling the Century Block. 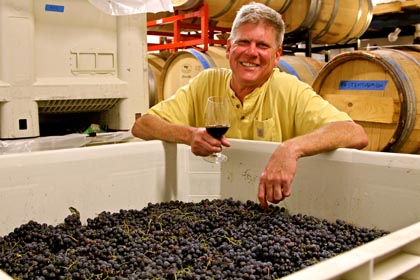 Sharing his overall impressions, Montgomery tells us, with both seriousness and his characteristic facetiousness, “overall, 2012 is the best year ever, of course.  But really, Zinfandel grapes this year were very sound – no rot, no mildew, no bad juju, and so I was very pleased.  Right now, though, I’d have to say that the 2012 Zinfandels are not looking quite as good as the 2010s did at this stage, but they are definitely better than 2009 and 2011.” 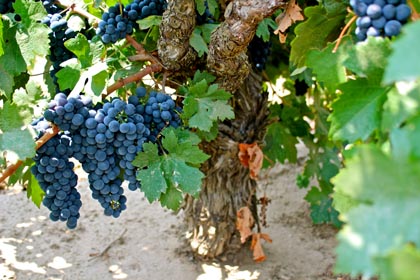 Insofar as the famed Soucie Vineyard, Montgomery says, “to hedge our bets, we picked Soucie three times this year, but between the early and late pickings, they all came in close to 27° Brix.”  In other words, do not expect a lighter alcohol, new fangled style of Soucie Zinfandel from m2 this year.  “The 2012 will be a classic Soucie,” says Montgomery; “we got the Soucie dirt and the powerful fruit, with better than average acidity and pH – if anything, 2012 was a year in which we didn’t need to make much adjustments.”

On the other hand – although he’s not 100% sure what he’ll be doing with it – the 6 tons of Century Block Zinfandel picked in mid-August has produced a wine that is a significant departure from m2 Zinfandels of the past:  at just 13.4% alcohol (from grapes picked at 23.6° average Brix), it is a lighter, silken textured style of Zinfandel, already bursting with floral, wild brambly, pure and picquant berry qualities of the grape – just the thing for new fangled tastes.  “In the past,” says Montgomery, “I’ve always favored American oak over French oak for Zinfandel, but this is one Zinfandel I think will benefit from time in French oak.”

Because we were thirsty, we ended our visit with a taste of the currently released 2010 m2 Artist Series Lodi Zinfandel ($35):  a more sculpted, studied style (blended with Maley, Soucie and Mohr-Fry fruit) than that of the usually wild and wooly m2 Soucie zins – in this case, sporting a lusciously sweet toned blackberry aroma nuanced with raspberry preserves, tasting thick, dense, juicy and consistently layered on the palate.  Another m2 winner!

Says Mr. Montgomery, “after twelve vintages here in Lodi, I’m ready for new things.  We’re also on a growth spurt – we crushed 70 tons this year, after doing only 35 last year.  I wanna keep things real for people, though – m2 will never be mass production, it will always be about the quality of wine.” 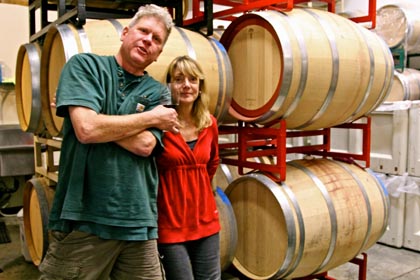