Mystery wine for the ages: the 2010 Borra Heritage red 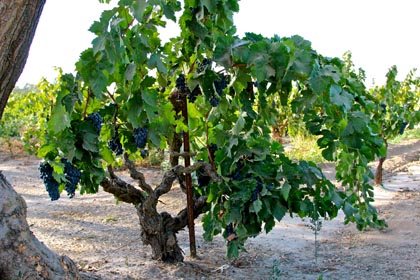 Part of being a winemaker in Lodi, evidently, is being a prognosticator; albeit, no spooky powers necessary – just good sense.

During the first week of October 2010, on the day that Steve Borra, and his Borra Vineyards field manager Manuel Maldonado picked the grapes going into their yearly “field blend,” Borra winemaker Markus Niggli took one look at the fruit coming in – plump and bursting with vivid, zesty flavors – and pronounced the quality “fantastic,” and confidently predicted, “2010 will be a great vintage” (re our original October 14, 2010 blogpost, Rhapsody in red). 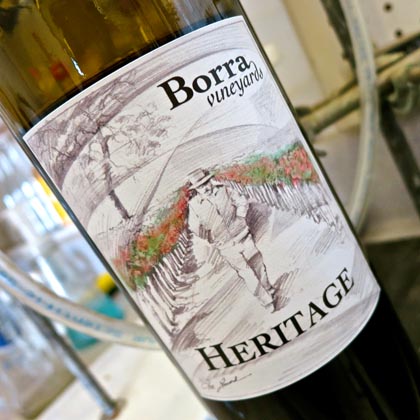 Borra’s Heritage red is a true field blend:  all the red wine grapes from the vineyards surrounding the Borra winery on Armstrong Rd. (south of the town of Lodi) picked on one morning, destemmed, gently crushed, and fermented together in one 12 ton stainless steel tank — qualities of terroir (or “sense of place”) emphasized even more by Mr. Niggli’s penchant for native yeast (as opposed to inoculated) fermentations.

The vitals:  47% Barbera; 22% Petite Sirah; 18% Alicante Bouschet; 13% Carignane.  The oldest vines going into the wine come from the family’s Church Block – growing next door to the home vineyard, a mixed bag of waist-high, gnarly, wizened, head trained Carignane and Alicante Bouschet “bushes,” originally planted around 1930 – so-called because up until recently (before being purchased by the Borras in 1995) it was owned by the local Catholic diocese, which seriously considered pulling up the vines and building a church. 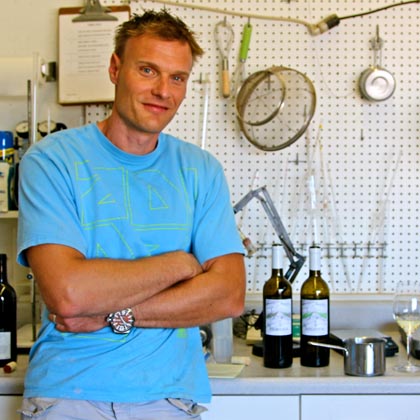 Up until the 2009 vintage, all of Borra’s winery/estate reds were simply bottled as “Field Blend,” but for the 2010 vintage a new label was designed, and Heritage added to the name to signify, as Niggli tells us, “the tradition of grape growing handed down from one generation to the next in the Borra family.”

The way Steve Borra originally explained it to us two years ago bears repeating:  “The field blend has always been sort of a homage to the way my grandfather made wine.  He was very Old World — he’d pick the grapes all at once, and everything would go into one vat, no matter what kind of grape it was.  Of course, he used wild yeast, and everything was natural — he didn’t know about stuff like sulfur — and he’d siphon the wines into one gallon jugs, one jug at a time, one barrel at a time. Keep in mind, my grandfather could easily polish off a liter of wine at a time — and that was just lunch.  He’d finish another bottle and a half for dinner.

“Of course, by the time he’d get to the bottom of a barrel, the wine would no longer be stable, exposed to so much oxygen, and so it didn’t taste so good.  When it came time to pop open a fresh barrel, he’d fill up his jug, bring it back to the house, pour himself a glass and say, ‘oh, this barrel is so much better than the last one!’”

Adds Mr. Borra, “the purchase of the Church Block allowed us to make a field crushed blend in the style of my grandfather.  The blend is usually 45% to 50% Barbera from around the winery (mostly 40 year old vines), but it is the old vine Carignane and Alicante Bouschet that really give the wine its guts — puts meat on the bone.” 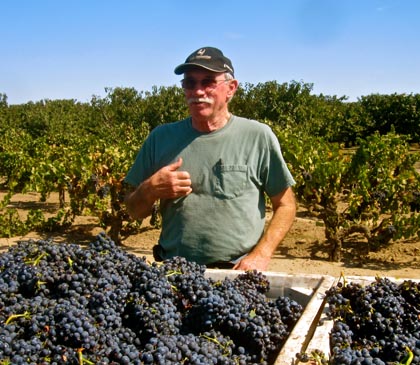 Mr. Niggli adds, “how the field blend actually turns out every year has always a mystery — it depends upon how much of each of the grapes come in, which is something always determined by Mother Nature.  In 2010 we got more Barbera than expected, and that’s what gives the wine such bright, high acid components.  The Alicante Bouschet gives it the intense color, and the Petite Sirah and Carignane adds the spiciness.”

Nowhere else in Lodi – and the world, for that matter – is Barbera blended with Carignane, Alicante Bouschet and Petite Sirah.  As unorthodox as it is, Borra’s results have been seamless and sensational, and even more so under the phenomenally cool, steady circumstances of the 2010 vintage:  what a happy happenstance… what an amazing Heritage! 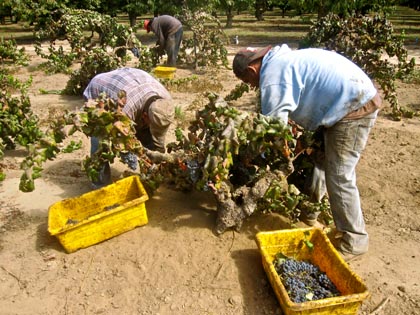