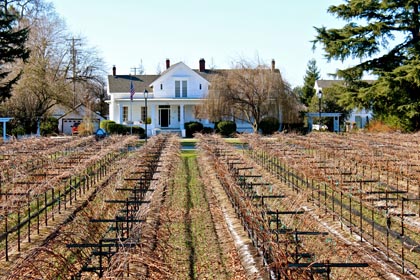 The Sorelle estate in January, with the historic Dodge House (built 1866) 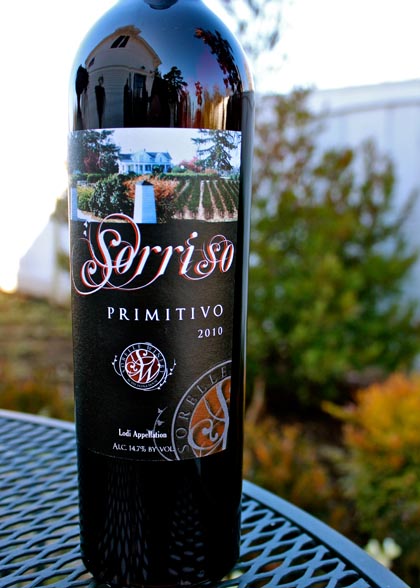 Perhaps even better yet?  The more modestly priced, but even finer and friendlier 2010 Sorelle Sorriso Lodi Primitivo ($22):  like any good Zinfandel – which it is, and isn’t – redolent of raspberry and black cherry qualities in the nose, tinged with wispy tobacco, with compellingly soft yet zesty, silky, finely balanced flavors.  Says Sorelle Winery proprietor, Mike Scott, “this wine has been tasting great from day one; in fact, probably since before day one… it was always our favorite wine to show in our barrel tasting events.”

Pour one of these Primitivos alongside a striploin grilled with cracked lemon pepper, a roll of pork loin coated with rosemary, or even just a salad with Italian herbed goat cheese, cherry tomatoes and a balsamic vinaigrette, and oh my…

Such, perhaps, is the lot of the Primitivo grape, which is becoming more and more of a go-to varietal for foodie oriented wine lovers who prefer finesse and pure drinkability over, say, big, honking red wines that give you those fierce, heady sensations, even after just a few sips.

One of the curiosities of Primitivo, of course, is the fact that this grape is identical to Zinfandel in respect to its DNA.  That is to say, Zinfandel and Primitivo are basically two clones of the same grape:  Zinfandel being far better known and more widely planted in California (since the 1850s); and Primitivo being pretty much a “rediscovered” grape, originally brought into the U.S. from Apulia (Southern Italy) in 1968, and planted in earnest only as results of the long search into the once mysterious origins of Zinfandel began to come to light.

But if Zinfandel is the same grape as Primitivo, why are they considered considered different; and thus judged, in competitions like the San Francisco Chronicle’s, as two separate categories?  Good question.  They are the same, but not exactly.  For instance, California growers working with Primitivo vines that originated in Apulia have noticed slightly different textures on the backsides of its leaves:  whereas the back of Zinfandel leaves have a rougher cobwebby consistency, the back of Primitivo leaves have a felty, “dense hair-like” texture.

More significant is differentials in fruit anatomy, which generally results in slightly different wines.  Zinfandel is notorious for setting uneven sized berries – ranging from small and raisiny to fat and pulpy  (growers often refer to this morphology as “hens and chicks”) – whereas Primitivo tends to set uniform, medium-full sized berries in slightly looser clusters, and are thus less prone to bunch rot as well as the raisiny or overripe flavors typifying Zinfandel. 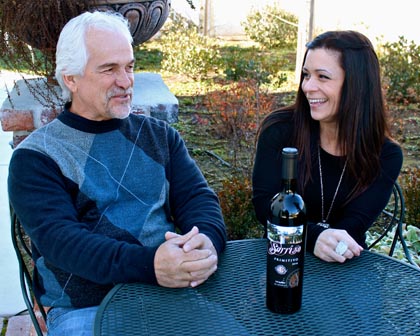 Primitivo’s even sized berries usually give less of that wildly aromatic, big alcohol, jammy rich character for which Zinfandel is known, and loved.  If Primitivo was Zinfandel’s identical twin (which it is), it would be the more demure, well behaved and dependable sibling – the one that mom always loved best.  Whereas Zinfandel would be the unpredictable one, often showing up late, or if at all, with a brazen attitude, multiple pierced body parts and wanton tattoos – but you gotta love that, too!

Finally, another differential that matters:  head trained (i.e. untrellised) Zinfandel vines have long been preferred by many growers precisely because of the tendency of the plant to set uneven sized berries — planting on free standing vines provides an umbrella-like canopy that protects the Zinfandel’s fruit’s tender skin from all angles of the sun, thus minimizing a little of the effect of the grape’s uneven ripening.  Un problema:  this means picking and thinning is done by hand.  But because uneven ripening is not such an issue for Primitivo, it does just fine on trellised systems, and thus can be harvested mechanically for less cost.  Not that hand picked Lodi Old Vine Zinfandel is terribly expensive (if anything, it’s amazingly under-priced); but economically, planting more Primitivo and less Zinfandel makes a lot of sense.

Otherwise, Zinfandel and Primitivo are one and the same — like Mary-Kate and Ashley, Tiki and Ronde, Dear Abby or Ann –  whether you know it or not.  At least for Lodi’s Harney Lane Winery, where regular bottlings of Zinfandel are made up of as much as 40% Primitivo; yet still retain all the luscious, juicy, wild berry fullness that a dyed-in-the-wool zin lover craves.  Then there are the Lodi grown varietal Primitivo bottlings by Uvaggio as well as Ripken Vineyards which, like Sorelle’s, are both correct if strikingly pretty and compelling offerings – first class all the way, and exactly what you expect out of the well heeled sibling! 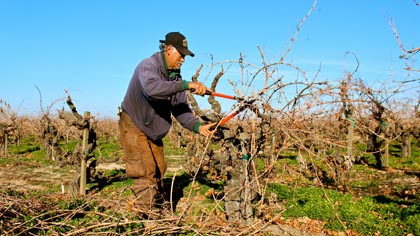 The work that goes into Lodi's old vines in January