McCay makes early call: 2012 Zinfandels could be Lodi’s best ever! 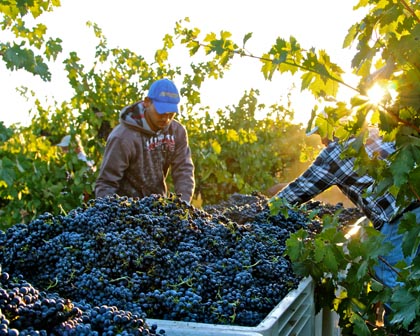 It’s always good news when a Lodi AVA winemaker makes good:  on a wine list in an hoity-toity restaurant like The Kitchen in Sacramento, or in the effusive columns of discriminating critics like San Francisco Chronicle’s Jon Bonné, who recently wrote... 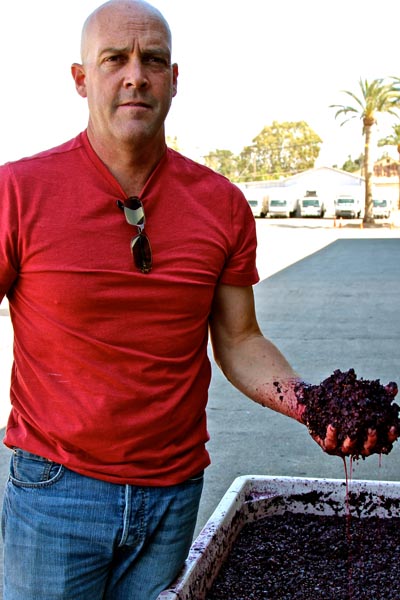 A Lodi resident and grape grower since the 1980s, McCay has been making his own wine commercially for the past five years, wines that head in the opposite direction of most of Lodi’s recent doings – Zinfandels (plus some Cabernet Franc and Petite Sirah) that speak a bit more quietly, that dial back the oak and heighten fresh flavors.  He often ferments his wine with indigenous yeasts (he finds they induce cooler fermentations and less volatility) in order to pursue his ultimate goal:  highlighting the uniqueness of Lodi’s vineyards, using Zinfandel as a medium.

We’ll drink to that; and from what Mr. McCay recently told us, over just-fermented tubs of Lodi Zinfandel this past Saturday (September 29), we’ll probably be drinking a lot better in the near-future – thanks to a 2012 harvest that has been not only generous and trouble-free (knock on wood), but also “spectacular” in terms of pure, unadulturated quality.

Says McCay, “I’m very excited about 2012 – I love the brightness, and the deep, rich flavors we are getting across the board.  The Zinfandels are upfront, but also showing great potential.  Honestly, I think 2012 has the potential to outperform even 2010, which was even more ‘perfect’ in terms of numbers and ease of picking.  The 2010 Zinfandels were great, but at this point in time, the 2012s are tasting even better!”

To make his case, McCay dips a plastic pitcher under the cap of floating skins in one of his Zinfandel vats.  He takes a measure of the residual sugar, and gets a minus-zero reading:  the wine has completed fermentation.  Then we taste it, and by gosh and golly, it’s already tasting like a complete completed wine:  super-raspberry and tobacco aromas, with beautifully bright, upbeat, zesty flavors in the mouth – like, ravish me now, baby!

Says McCay about this wine, “this is our Lot 13 Zinfandel, which comes from the vineyard I recently bought on Schmiedt Rd., right next door to Ross Schmiedt’s 1918 vineyard.  Lot 13 was planted around 1915.  This batch was picked just two weeks ago and native yeast fermented, and look how easily it’s gone through, and already amazingly fresh and clean.” 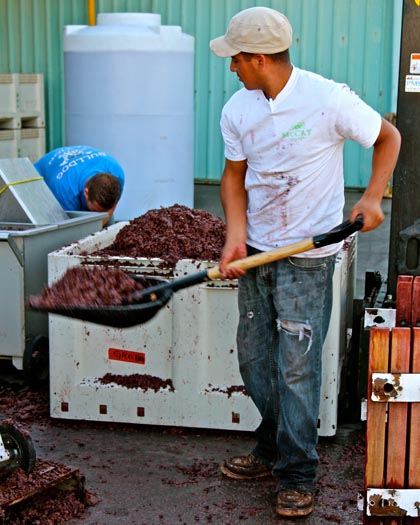 From the fermentors, McCay brings us to some of the Zinfandel just recently pressed and barreled down.  We taste from a barrel containing Zinfandel from McCay’s Truluck’s Vineyard – a west side Mokelumne River AVA planted in various times (vines between 40 and 80 years of age), farmed by Keith Watts.  The barrel samples taste crystal clear with Zinfandel character:  pure, lush, juicy red berry aromas and flavors, revved up by palate zinging acidity, magically unimpeded by any excess tannin or other rough edges.

McCay tastes us on a barrel of another red wine he is especially enthusiastic about:  an 8.5 ton lot of 2012 Grenache, picked in mid-September.  Five of those tons were fermented into a rosé (another McCay specialty), and the rest was native yeast fermented into this red wine that is already stunning in the barrel:  pretty, strawberry fresh and zesty, with surprising complexities (peppercorn and rose petal nuances) for such a baby.  Rhône style wine lovers:  keep an eye out for this one, which will be McCay’s first-ever bottling of a varietal red Grenache.

McCay tells us, “at this point, we have all our grapes in, except for the Equity Vineyard on the west side of Lodi.  The 90° days and cooler nights going into harvest have been just about perfect, and that’s what’s showing in the wines.  All of our 2012 Zinfandels are finishing at alcohols lower than 15% — most of them closer to 14%.  With such intense flavors, you couldn’t ask for much better!” 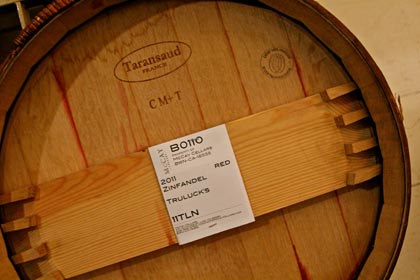 In terms of quantity, McCay tells us that 2012 will not be the highest yielding vintage that he has seen in Lodi, but it’s that very fact that might also account for the surprising quality.  “In Zinfandel alone,” says McCay, “we’re bringing in just over 100 tons – that should give us about 5,000 cases.

“In a normal year we would have gotten a little more, but for some reason we’re only getting about 150 gallons per ton, whereas we usually get closer to 175 gallons.  The low conversion rate is probably due to the smaller berries, but that’s what’s so exciting – we’re getting a little less Zinfandel in 2012, but I really believe it’s going to end up being the best wines we’ve ever made.”

Finally, because he can, Mr. McCay pops open a bottle of his 2010 McCay Contention Lodi Zinfandel:  McCay Cellars’ current “top-of-the-line,” which will not be released until next month (November 2012), and probably retail for around $60.  “Contention” is a 1.5 acre block of 70 year old vines farmed by Bob Lauchland, and used to be part of a vineyard McCay has called “Trainwreck” (located east of the railroad tracks crossing Kettleman Ln. on Lodi’s west side; unfortunately, pulled out by Lauchland earlier this year because of phylloxera issues).

The taste of the 2010 Contention?  Imagine Eva Langoria rising out of scented foam on gilded half-shell – glorious, intoxicating wild berry aromas laced with spice notes of mace, pepper and ginger, underlain by faint whiffs of loamy earth.  On the palate, the feel is voluptuously full yet compact – the earthen, spice-cake fruit packed into a core with fistfuls of rounded tannin.  Definitely not the “dialed back” style of Zinfandel usually associated with this winemaker – but sometimes, even a McCay has to step out of the box. 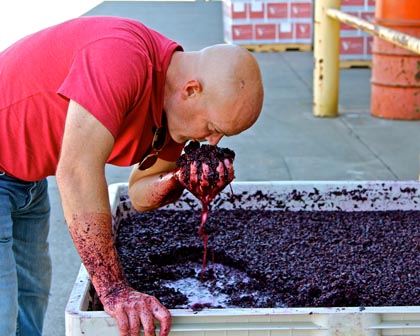